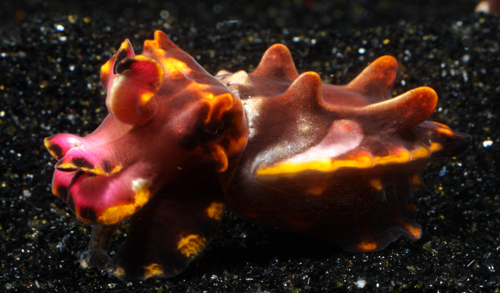 It’s been almost two years since Allison Petty first successfully closed the life cycle of Metasepia pfefferi at the Long Island Aquarium in Riverhead, NY (http://www.reefsmagazine.com/forum/reefs-magazine/100522-rearing-flamboyant-cuttlefish.html).  Her continued success with this project has provided us with more than enough cuttlefish to keep them on display ever since.  As with other cultured marine life, when we end up with a surplus, it’s a great opportunity to do some trading with other public aquaria.   Allison has been trading cuttlefish out to institutions around the country for more than seven months now and it seems that the public aquarium market for these little gems may be getting saturated.  Since she is still raising more of them than we can realistically house here, we have begun to discuss the idea of using them to barter with a few of the marine life wholesalers from which we obtain some of our display specimens. 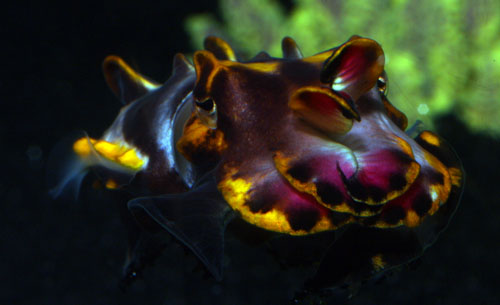 If we decide to go ahead with this plan, it would mean the first ever public availability of captive bred flamboyant cuttlefish. Don’t expect them to be very affordable though.  When we calculate the cost of the live mysid shrimp and man hours that went into raising them, it becomes clear that we will never break even.  Also, it should be pointed out that these colorful little cephs will come with a strict expert-only restriction as they demand live food, perfect water quality and a dedicated tank.  In the meantime, enjoy these videos of the babies and their parents at feeding time and start thinking about where you might want to put that new cuttlefish tank.