As I always say, pellet feeds are produced at lower temperatures compared to other feeds. I think this makes them the best feed to use in aquariums, in theory even better than granular feeds, which are manufactured at slightly higher temperatures. It’s less polluting than frozen feeds, but it keeps all the nutritional properties that otherwise get lost in feeds made at high temperatures (more details on fish feeding).

The first thing you notice about Amtra Pro Pearl 1.5 is its black color, caused by the vegetal active carbon.

AMTRA Pro Pearl 1.5 is made of herring flour, a source of Omega 3, krill and shrimps, corn, veggies, spirulina, hydrolyzed fish protein, brewer’s yeast, peas, and salmon oil. In addition to this formulation, there’s natural Astaxanthin and vegetal active carbon. It appears to be a complete feed for non-algae-eating fish, so if you have some, you should add lyophilized or fresh seaweed, or specific feeds for those fish.

I really like the presence of active carbon because it helps to clean the fish’s intestines; the Astaxanthin is important as well. The feed is not only complete, but it also has something more. 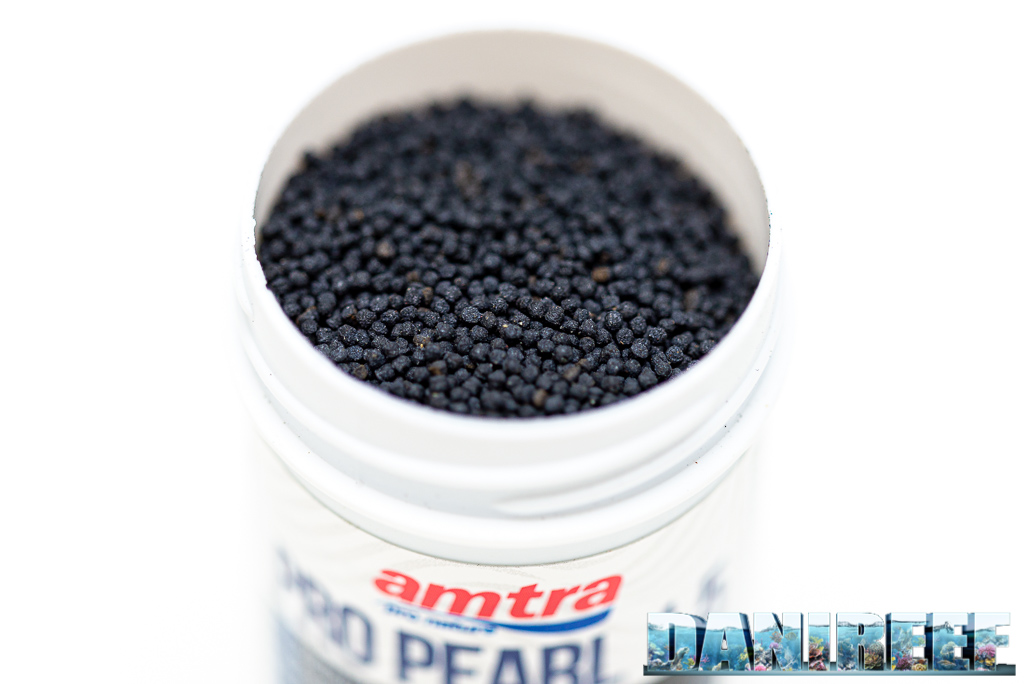 AMTRA Pro Pearl 1.5 feed floats very well, and I love that in feeds. It eventually drops to the bottom because the fish rush on it, but it falls slowly.

Unlike what we usually do, we won’t show you the container because it’s all here. A plastic jar without spoon, or seal or screw closure. The absence of the spoon is very weird, as it is very useful and I don’t like to touch the feed with my bare hands.

The feed is composed of the following ingredients:

The nutritional analysis is very interesting. As always, the main part is composed of protein:

The same analysis has been reported in the following chart:

As you can see, the feed is mainly proteins (half of the total) and 10% fats. This makes it a caloric feed, appropriate for fish that usually eat other fish or crustaceans. The proteins are close to the average quantity in similar feeds (49.7%), the fats too (9.8%), while the fiber is less than usual, 1% instead of the average 1.6%. The remainder is moisture and ashes, bringing the filling material to 40%, right above the average of 35%.

From which derives the following chart:

In the first graphic, comparing vitamins, we see that, in an unusual move, the Vitamin C is predominant. In many species of fish, the ability to synthesize ascorbic acid or vitamin C isn’t very developed so we have to supplement their diet with vitamin C. This is due to the fishes’ enzymes, which has a low level of the L-gulonolactone oxidase enzyme (Chatterjee, 1978) which catalyzes the conversion of glucose into ascorbic acid, and the benefits are:

When we focus on the minerals, we see that they are mainly Zinc, Manganese, and Iron, then Copper and Iodium.

Notice the black color of the feed in this close up view of the pellets.

To deepen your understanding of fish food we suggest our useful article: fish feeding. [translated by Agnese Poggi]