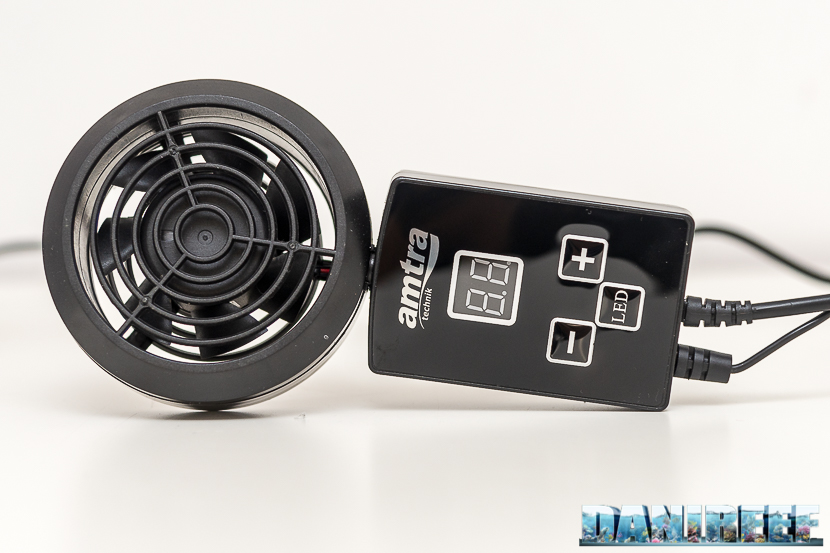 AMTRA presented its own fan for aquarium with moonlight named Borea 80 LED. at Interzoo 2018. We received it and we have used it, so today we’re going to talk about it.

The problem of temperature regulation in aquariums is one of the bigger issues that an aquarist has to face. Usually, at least in Italy, it shows up in the summer, and, in the southern regions, also in some months before spring and fall. The biggest aquariums benefit greatly from a chiller, but for the smallest ones a fan is usually enough.

The fan decreases the temperature by increasing the evaporation of water from the aquarium. For this reason, the air stream should be directed obliquely to the surface of the water.

In order to resolve this problem, AMTRA projected Borea 80 LED, an 8cm orientable fan with a thermostat in which there are also blue LEDs with moonlight function. As the Latins said, “nomen omen“, that is: “the name presents what it represents“. And Borea is a character belonging to the greek mythology, the embodiment of the North Wind, son of the titans Astreo and Eos. 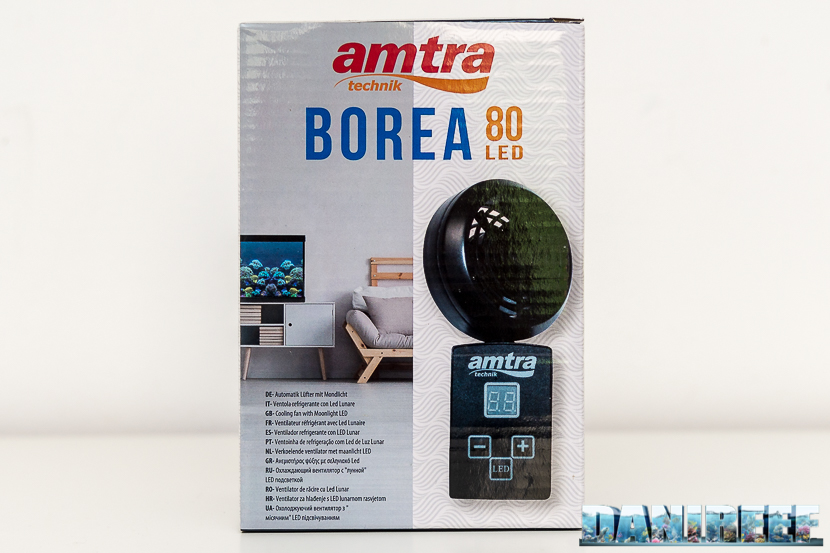 We’re technically speaking of an 80 mm orientable fan, connected to the central body with a liquid crystal display and three buttons. There is also a connected temperature probe. 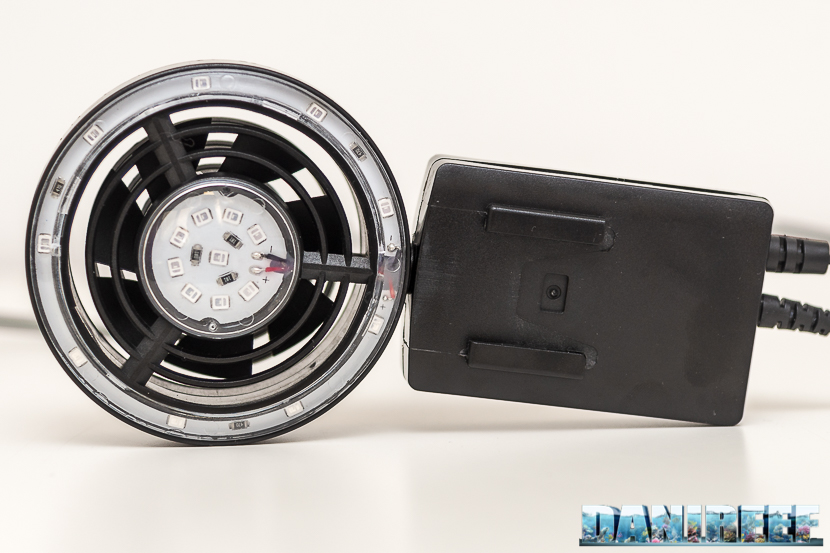 Under the fan are the blue LEDs that can be adjusted between 5 values of different intensity to meet the different needs of the aquarists.

The fan has to be fixed to the glass with an acrylic bracket connected to the central block by the holes that you can see in the following picture. 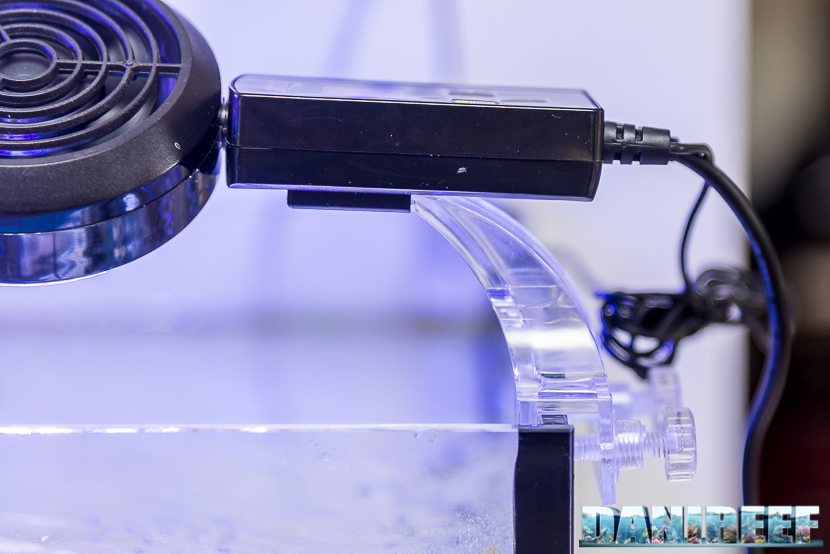 The bracket is locked to the glass by plexiglass screws and it can be inserted in glasses of a thickness up to 12 mm. 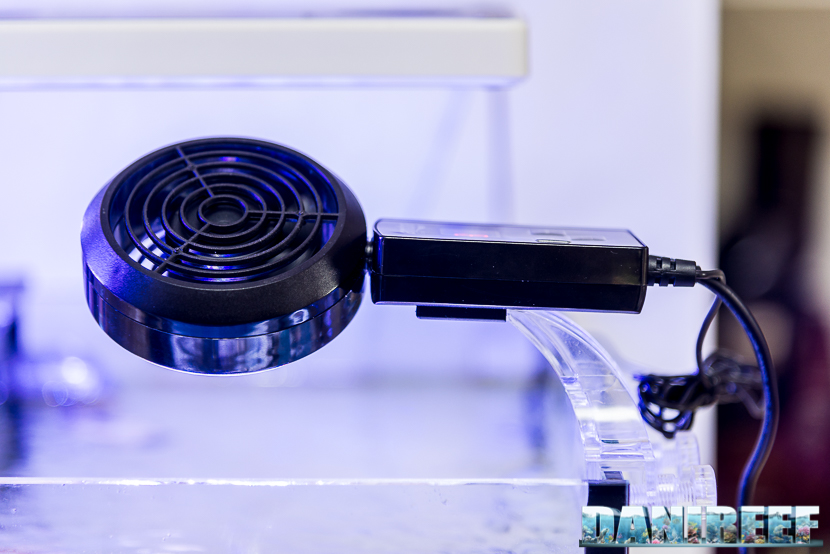 Above, we can see the fan mounted on the aquarium, with the fan itself inclined in order to move the water surface of more or less 45°. 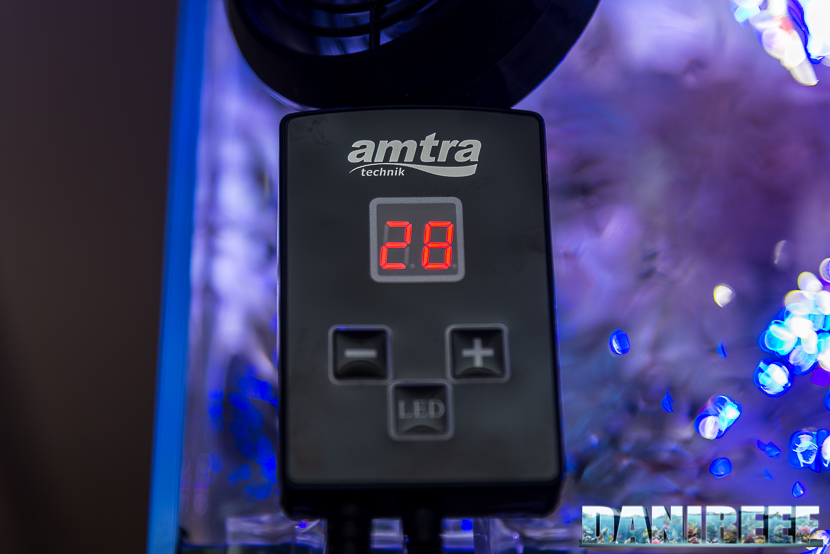 Here above we can see the central body, with the display reporting the temperature in the aquarium. We inserted the fan in an 80 liter minireef, AGP Gold, and it reported a temperature of 29 degrees C. In a few hours, the temperature has been brought to 27 degrees C.

The rotation of the fan can be set on 5 different levels depending on the type of aquarium to be cooled. The only noise coming from the fan is the moved air, it is very silent! You begin to hear a metallic noise after about a month of use, supposedly because we’re talking about fan of a very good overall quality. 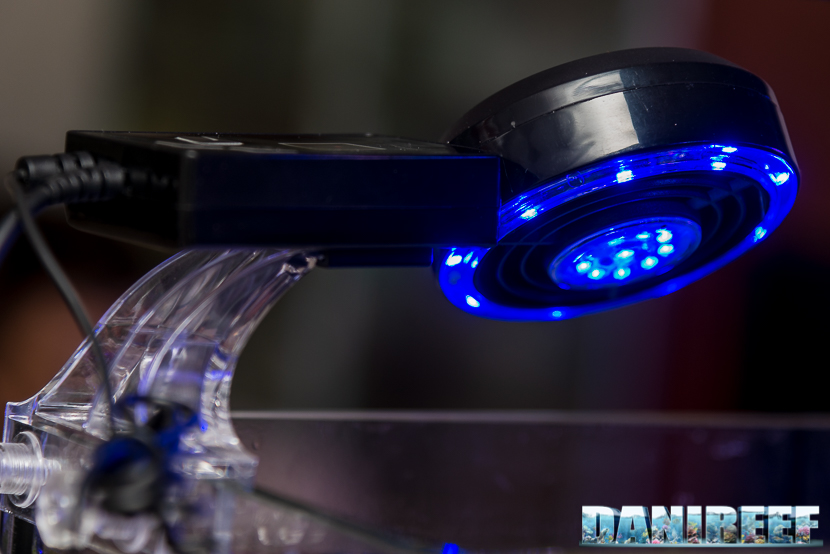 In the inferior part of the fan, in the favored place, there are the blue LEDs. As you can see in the picture they have been put both in the central part and in the external ring. These LEDs also can adjusted set between 5 power levels.

According to me they’re too powerful, in fact even at level 1 they illuminate the aquarium too much. At the 5th level they could almost work as a lamp for a small minireef.

But as an addition to an already present light I think they’re perfect.

How to set an AMTRA Borea 80 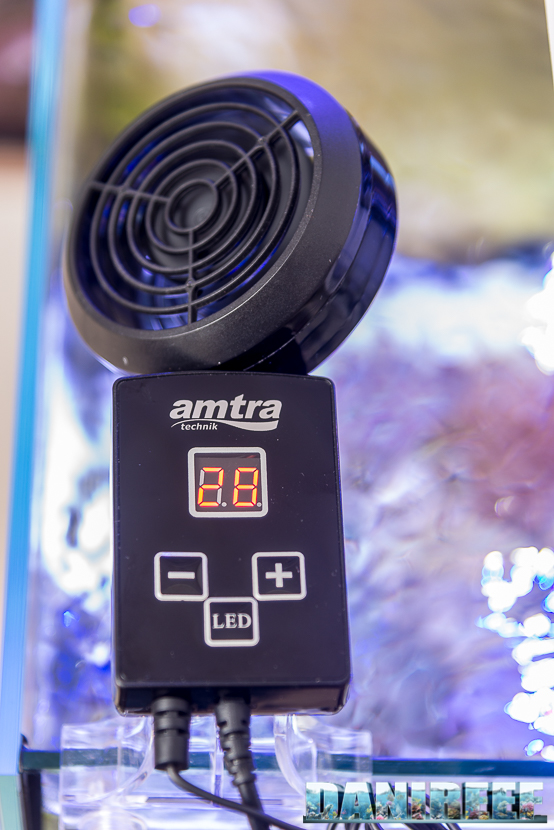 On the central body there are three buttons: minus, plus, and LED.

If you press the minus button for three seconds you enter the configuration menu, and you can choose the level among the 5 available.

If you press the plus button for three seconds you enter the temperature settings, where you can set the temperature the fan has to maintain. Once you’re in each menu, you use the buttons plus or minus.

With the LED button you can set the LED power. You have 5 levels plus a level where the LEDs are turned off. 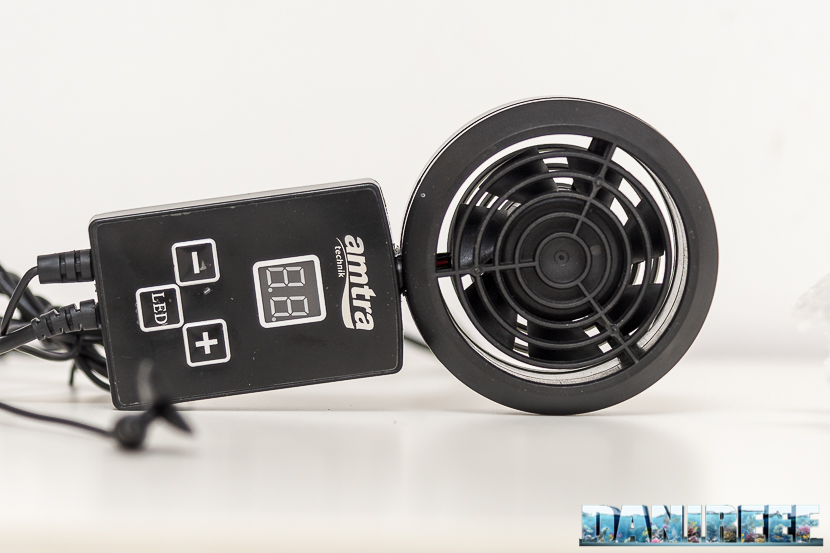 AMTRA Borea 80 is affordable ,between 39 and 44 euro, vat included. A honest price for an adjustable fan with thermostat included. Amazon sells it at this link for 34 euro. Even creating your home made solution, you won’t spend less than 10 euro for a 8 cm PC fan, and then you should add an adjustable power supply and a thermostat. But eventually it won’t have the comfort of the AMTRA Borea 80, with its ease in use and setting. We really liked the option to tilt it as we please.

The presentation and setting up video

Davide Robustelli of AMTRA shot this, and it explains all about the AMTRA Borea 80.

We noticed a little “stain” while we were testing the fan, and AMTRA said it’s in solution. In fact, the fan doesn’t have a hysteresis break, so if you set it at 27 degrees, as we did, the fan will bring the aquarium to 27 degrees and then it will always turn up everytime the temperature increases, even if just a tenth of degree. This leads to the fan to switching on and off very often. This is the only thing we have to report of a fan that we liked very much. Even considering the price, that we think it’s in line with the technical content and the results it gives. 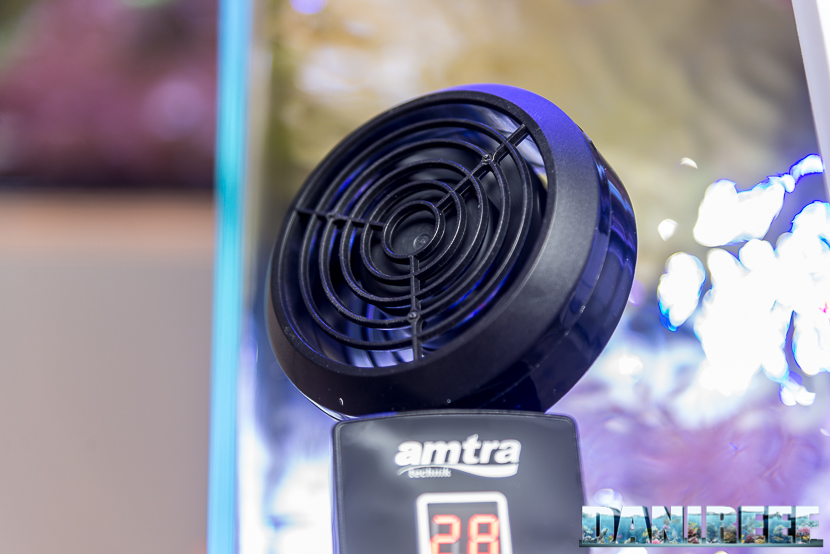 The construction is very good, the fan is pretty much silent, except for the moved air itself, obviously. The blue LED could be too strong in certain contexts.

Remember that this type of chilling increases the evaporation, so we discourage this purchase if you don’t have an automatic fill up system.

Absence of a hysteresis cycle

LED too much powerful to work as moonlight, even at the level 1