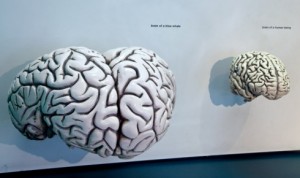 In the 1960s controversial scientist John Lily set-up a dolphin research initiative in the U.S. Virgin Islands. He was working for SETI (Search for Extraterrestrial Intelligence) who believed that soon they would be contacted by intelligent life, from somewhere in the cosmos. They wanted to know how to interact with a vastly different intelligence, so to learn, they hired Lily to break the communication barrier between humans and dolphins. In fact it culminated in what may be the strangest animal-human relationship ever, a sexual relationship between researcher Margret Howe and Peter, an Atlantic bottlenose dolphin. The final straw for most of the other researchers was when Lily injected several dolphins with LSD, hoping that perhaps it would open a bridge of mass communication. The experiment fell apart, all the researchers left, and it was over. Despite the close “romantic” relationship Margret and Peter had, she would never see the dolphin again.

John Lily’s team learned more about why humans and dolphins couldn’t communicate, than they did about unlocking a universal Earthling language. By 1970 the thought that dolphins were smarter than human beings was dying. If they were so smart, why didn’t they build underwater cities, where did they hide the advanced submarines and planes – why didn’t they attempt to reach outer-space? Dolphins swim around and eat fish, they can’t be smarter than us. 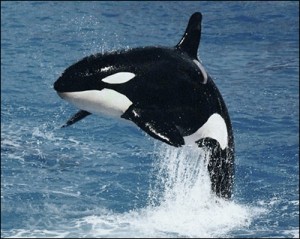 Now at the dawn of the 21st century, scientists are starting once again to question whether or not human beings are the top of the intellect hierarchy on planet Earth. It’s a role we accepted under self-appointed circumstances. We assumed because of our technology, language, arts and medicine we were the smartest, but we all know what assumptions make. Physical evidence (such as comparing a toothed whale’s brain to a human’s) combined with historical evidence (such as the fact that Neanderthal man’s brain was larger than ours) has created a new way of measuring intelligence, taking into account that different evolutionary circumstances create vastly different levels of intelligence. Just because a type of intelligence is different, doesn’t mean it’s any less complex, or lacks self-awareness and emotion. Perhaps dolphins and other toothed whales don’t have any technology because they are perfect specimens of organic technology? Considering toothed whales are much older evolutionarily than humans, perhaps their intelligence developed under a different set of guidelines? Does the fact that human beings are toolmakers automatically make them the smartest creatures on the planet, or does it point to inadequacies in our own physical abilties? 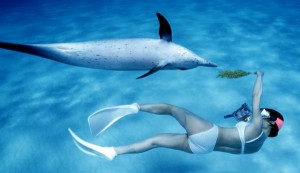 John Lily wrote that, “After 12 years of working with dolphins I realized the limits were not in them, they were in us. So I had to go away and find out, who am I?” Dr. Paul Spong who studied Cetacean intelligence said, “I found out, that at the same time we were manipulating them, they were manipulating us.” Today scientists have learned that evolution molds our intelligence. Human beings evolved to be tool makers, to travel in groups and transform our environment to suit our wants and needs. It’s tough for us to comprehend a mass-intelligence that doesn’t use tools, that doesn’t communicate with an auditory language like our own. We love to fantasize about a vast inter-stellar intelligence with cool technology – simply because we judge something’s intelligence by how advanced its technology is.

The thought that a dolphin or whale is more intelligent than us, turns this ingrained perception on its head. They don’t have any technology, they cannot even be taught sign language. Yet their brain is larger and more advanced than our own, having had tens of thousands of years more time to evolve. Perhaps this additional evolutionary period is what makes dolphins and whales marvels of organic technology, animals perfectly suited to their aquatic realm. Homo neanderthalensis (Neanderthals) possessed many of the qualities we often consider exclusive to humans. They created tools and art, and their ivory carvings found in the rock and rubble of history are not only artistic but functional. Neanderthals carved art-work into antlers, literally creating hunting almanacs that related to animal movement in procession with the seasons. The human brain has this formation: the paleocortex which reflects a fish or reptilian structure, responsible for instinct driven behavior. Often the paleocortex is called the ancient brain. The rhinic lobe is a collection of nerves that overlays the ancient brain, named for the Greek word for smell, as it was initially thought to be responsible for our sense of smell. On top of that is the advanced rhinic lobe, overlaid by the supralimbic lobe. Surrounding all this is the cellular covering called the neo-cortex, which is the grey matter of cells often pictured as the brain. 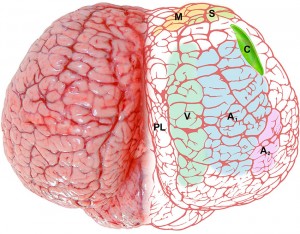 The cetacean brain has a much larger, better developed supralimbic lobe. This spreads sensory and motor function out across the entire brain, instead of isolating it to one particular area and leaving more of the brain to other purposes. In high school biology we were often shown the brain of a chimp, rat and human – showing how the brain size of a human leads to more brain convulsions, thus making humans smarter. Remove the rat and chimp brain and insert an orca brain, and the scales of intelligence are suddenly turned around. Human brains have three primary systems: the rhinic, limbic and supralimbic; where the cetacean brain has evolved to include an entire fourth system. This fourth cortical lobe, complete with a four-fold lamination makes cetacean brains radically more advanced than other mammalian brains.

So where is their technology? 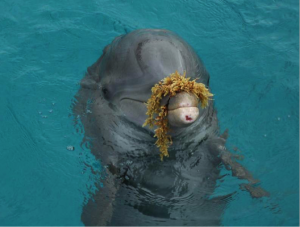 Dolphins and whales are living submarines. Their tissue can change texture allowing them to travel at great speeds over vast distances. Their brains are pre-programmed to slow the central nervous system when making a dive. Toothed whales have a natural sonar system that rivals the best in use by military and science today, and it’s believed that some whales may blast their prey with debilitating sonic booms. These animals are perfectly suited to live in their environment, they really don’t need to change anything – they simply have moved past the point of requiring technology. Human beings are always changing our environment to suit our needs, or developing gadgets to fill in our own physical limitations. Place a human being alone, without any technology on a deserted island and it’s unlikely they will survive, but toothed whales survive in the hostility of the open ocean. 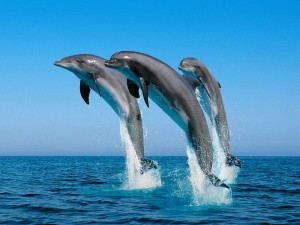 We may never know what a dolphin thinks when they gaze up at the stars, or if among toothed whales there is a sense of art and culture. Toothed whales communicate through high pitched frequencies and clicks, which we can hear but cannot begin to understand. We know that toothed whales use a natural sonar to find prey and navigate difficult environments. Like humans dolphins recreationally play and are even thought to compete with each other in organized sport, also engaging in sex for pleasurable purposes. Yet these animals are so different from us, that we can’t smash down the communication barrier and proving they are both intellectually and physically superior. Dolphins are recorded to treat human beings with a wary kindness, like they know what we are and they know to be careful.

Many who have worked with dolphins or studied their intelligence convert to full-time toothed whale conservationists. Ric O’Barry who worked on the set of the 60’s show Flipper now leads a full-time revolution against the dolphin slaughter and auction in Taiji, Japan. Others have pushed hard against outlets like Sea World who keep toothed whales in captivity, which often leads to lashing out among these gigantic creatures, resulting in the death of trainers. For years the Sea Shepherd Conservation Society has traveled to the dangerous and frigid waters of the Southern Ocean to protect whales from the annual Japanese slaughter, and now their operations extend to the Faroe Islands. Several multi-national cruise lines have removed the Faroe Islands from their routes unless they cease their whale slaughter. Many with a deep understanding of cetacean intelligence believe the consumption of their flesh has no place in the 21st century.

The question is, as science probes deeper into unlocking the mysteries of the cetacean brain and perhaps proves them humanities’ intellectual superiors, will the slaughter and captive efforts stop. For marine aquarists, the same can be said about captive fish. Each year handfuls of young scientists seek to unlock the mysteries of piscine intelligence, and so far, the results have been surprising. Do intelligent marine animals belong in captivity and on our plates, or is it time that humanity recognizes that it’s not the dominant intelligence on the Earth?