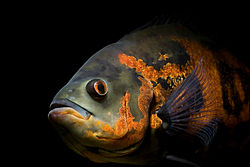 And not even a cool one! I’m honestly having a difficult time wrapping my head around this story. After this past weekend of having the opportunity to lay peepers on some of the most highly sought after saltwater gems in the industry – I’m talking Clarions, Personatus Angels and a Peppermints,  to name a few – I can’t understand why someone would go through such lengths for an Oscar. Then again, freshwater has never really done it for me. Two 23-year-old men, Rhys Joseph Ash and Ben Julian Rousu of Tara, Queensland arrived at the door of a 17-year-old male on the night of April 16, 2014 in search of the Oscar (Astronotus ocellatus), which was apparently promised to them by the teenager. When asked to leave, informing them he no longer had the fish in his possession, the two men broke through a screen window where a physical altercation ensued. The unnamed victim suffered minor injuries – swelling of the nose and forehead – and the assailants threatened to get them the fish or they’d return. This past Friday, Ash and Rousu appeared at the Dalby District Court where they were found guilty of burglary in company and assault. The time to be served for this fishy crime? 18 months in prison each. Seems a tad extreme, but I can think of a handful of people who’d likely do this over some fancy angels or wrasses.