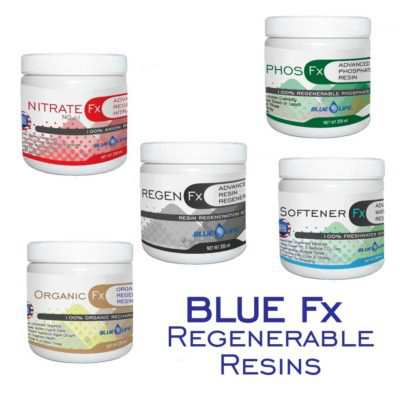 Blue Life USA has now launched a Regenerable Fx Resin line in which they have made as safer and more effective treatment for removing phosphates, nitrates, and general organics from your aquarium water. By utilizing the new Fx line of media resins, it’s now easier than ever to specifically target excess NO3, PO4, dissolved organics and hard water (for freshwater only). The product line features Nitrate Fx, Phosphate Fx, Organic Fx, Softener Fx, and Regen Fx. Nitrate Fx, Phosphate Fx, and Organic Fx are well suited with both saltwater and freshwater aquariums; whereas, Softener Fx is suited for freshwater aquariums. All three water treatments are high capacity resins that remove unwanted minerals and compounds that cause algae growth and other issues in your water. The media is MORE