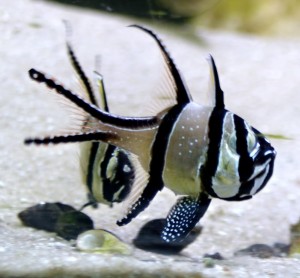 One of the great aspects of our hobby today is the innovations in method and technology for captive breeding of fish and  aquaculturing corals. Because of the economy downturn, I think we need to remind ourselves the importance of supporting captive breeding and aquaculture programs even though the cost may be slightly higher than wild caught/collected specimens.

Recently, Segrest Farms located in Florida, alerted their customers that an outbreak of a highly contagious and untreatable iridovirus has effected wild-caught Banggai Cardinals (Pterapogon kauderni). This is nothing new as its happened a few times in the past. Circumstances such as this can greatly reduce the wild population of these fish as collectors will catch more P. kauderni to make up for the losses. If you are the unfortunate recipient of one of these infected fish it will most likely die in a 4-6 week period. That makes the wild caught specimen more expensive than the captive bred version in the long run.

Segrest Farms has decided not to import wild caught P. kauderni and they deserve a lot of credit for putting business behind the well being of the species.

Lucky for us, there are many breeders out there supplying P. kauderni to the hobby albeit for a few extra dollars than wild caught specimens. If you factor the time, energy, and money invested in these breeding programs a few extra dollars is well worth protecting our wild populations of fish.