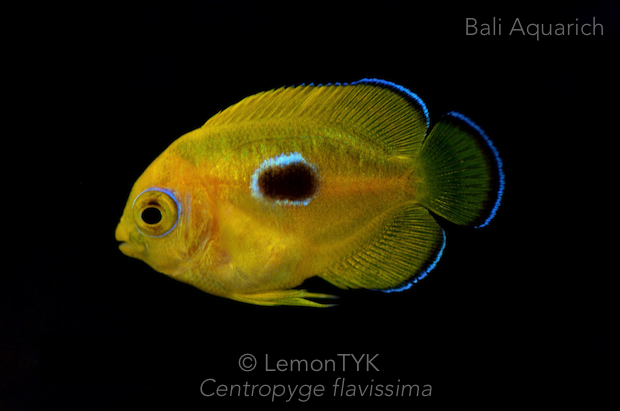 A pristine juvenile C. flavissima, born and raised in captivity.

In the last couple of years, Bali Aquarich has cemented itself as the front runner in the captive breeding scene. The Indonesian based aquaculture company founded by Wen-Ping Su has won the world over not only with their stunning designer clownfish, but also their increasingly commendable repertoire of captive bred angelfish. This trailblazing icon has edged its way up the echelon of angelfish aquaculture wizardry, right there with the likes of Karen Brittain and Frank Baensch. It’s hard to believe that Bali Aquarich’s virgin foray into angelfish territory started only a mere three years ago, and today, Mr. Su is proud to add Centropyge flavissima to his growing list of captive bred accolades. 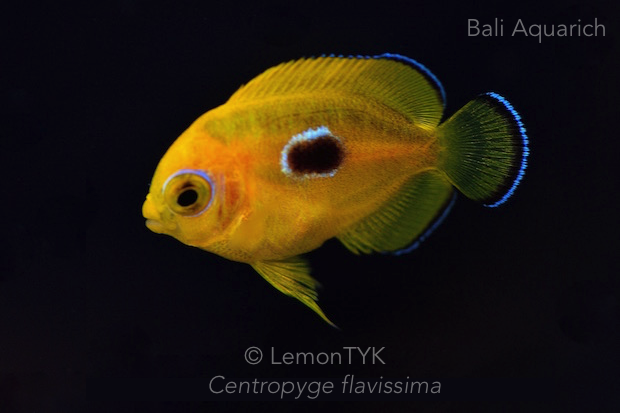 Another look at the juvenile captive bred Lemonpeel Angelfish.

The captive conditions presented in Bali is nothing short of brutal. With the searing tropical heat, limited infrastructure and giddying wrangling of manpower, how anything gets done here is beyond anybody’s wildest dreams. Yet in the metaphorical crisis of adversity, things come together in sweet serendipity, and Bali Aquarich delivers. Su’s success with Pomacanthus annularis in early 2012 took the world by storm, and although the species remains common and fairly pedestrian, it was a physical embodiment of aquaculture leapfrogging, with the mythos of angelfish breeding still deeply present at that time. 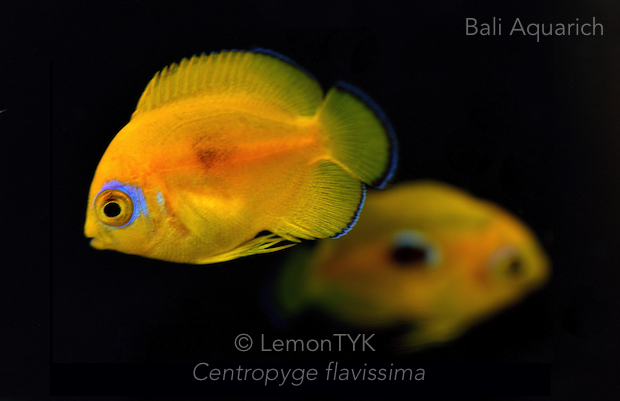 The manifesto of Bali Aquarich would soon dictate a change in the proverbial winds of captive breeding. With boosted confidence, the success of Pomacanthus annularis was joined by the likes of Apolemichthys trimaculatus, Chaetodontoplus duboulayi, Chaetodontoplus chrysocephalus, Pomacanthus navarchus, Holacanthus clarionensis and Holacanthus passer. An additional two hybrid angelfish were also produced in limited quantities, these being P. imperator x P. annularis, as well as P. trimaculatus x P. xanthopunctatus. 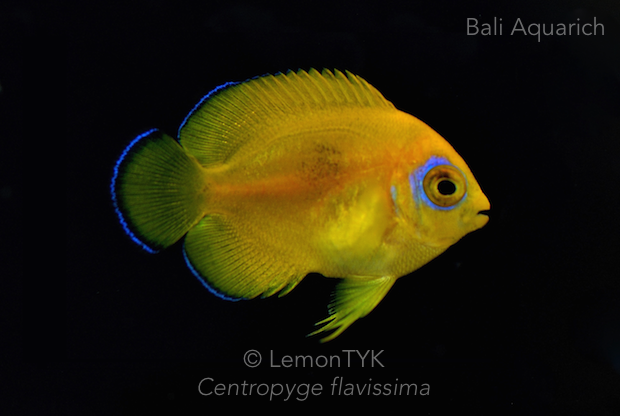 Another individual. Note the lack of the juvenile phased blue ringed ocellus.

This cavalier rampage of angelfish breeding with paradoxical circumstances presented by the Balinese environment quickly made Mr. Su a front runner in the captive breeding scene. Only two other aquaculturists have managed to secure demigod ranking before this, and they are Karen Brittain and Frank Baensch. In the last twelve months that have elapsed, i’ve paid Bali Aquarich no less than six visits, with each pilgrimage spaced roughly two months apart. In that short span of time, Mr. Su has so graciously provided with countless of photo opportunities of his captive bred angels, many of which i’ve written about in various blogs and magazines. 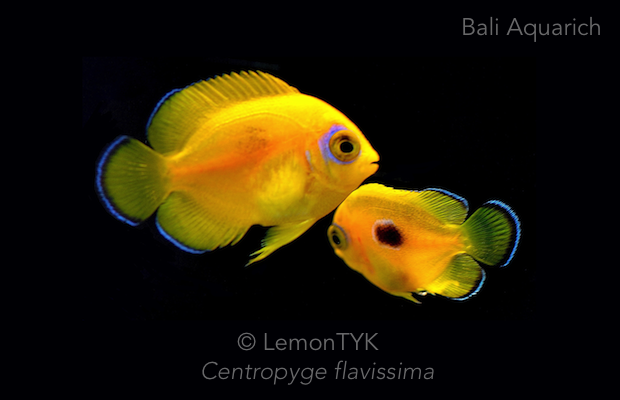 The month of November proves yet again to be in favour of Su, as he most recently announced his latest achievement. The Lemonpeel Angelfish, Centropyge flavissima, is the first captive bred success for this species since Frank’s debut in 2002, thirteen years ago. This is also Su’s first Centropyge species, putting the genus in the same league as Apolemichthys, Chaetodontoplus, Pomacanthus and Holacanthus in his growing collection.

The emergence of the captive bred lemonpeel angelfish came as a surprise much to Bali Aquarich as it did to the rest of the world. Because many of the parental broodstock are often housed with other species in large concrete vats, eggs of multiple species are often collected at the same time and raised in similar conditions. The subsequent rearing conditions and feed offered acts as a natural selection barrier, allowing only targeted species with the correct larval size to thrive. That way only angelfish with similar captive requirements and growth rates may develop in a particular system, despite having come from a soup of mixed species. 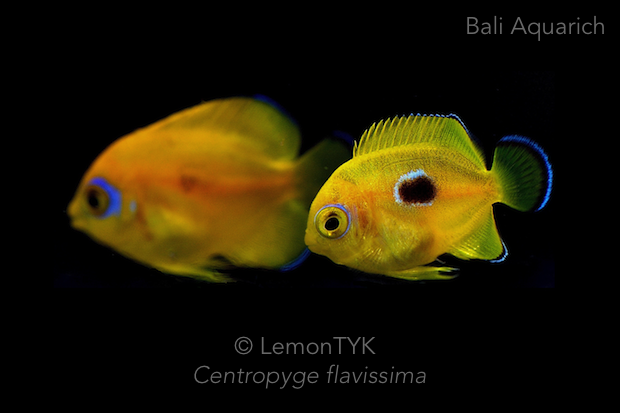 Frank Baensch first bred this species to completion in May 2002, 13 years ago.

Such is the case for Centropyge flavissima, when a few individuals were spotted as alien infestations in a batch of Apolemichthys juveniles. Egg sizes do not form a direct correlation to the size of a given fish. Centropyge flavissima, for example, has a much larger egg diameter than Chaetodontoplus conspicillatus or Pygoplites diacanthus. This may have allowed C. flavissima to develop alongside Apolemichthys, with the copepods and first foods offered being suitable for both species. With this in mind, the decision to then carry on specific isolation and breeding of any given species would end up in an executive decision made by Su. 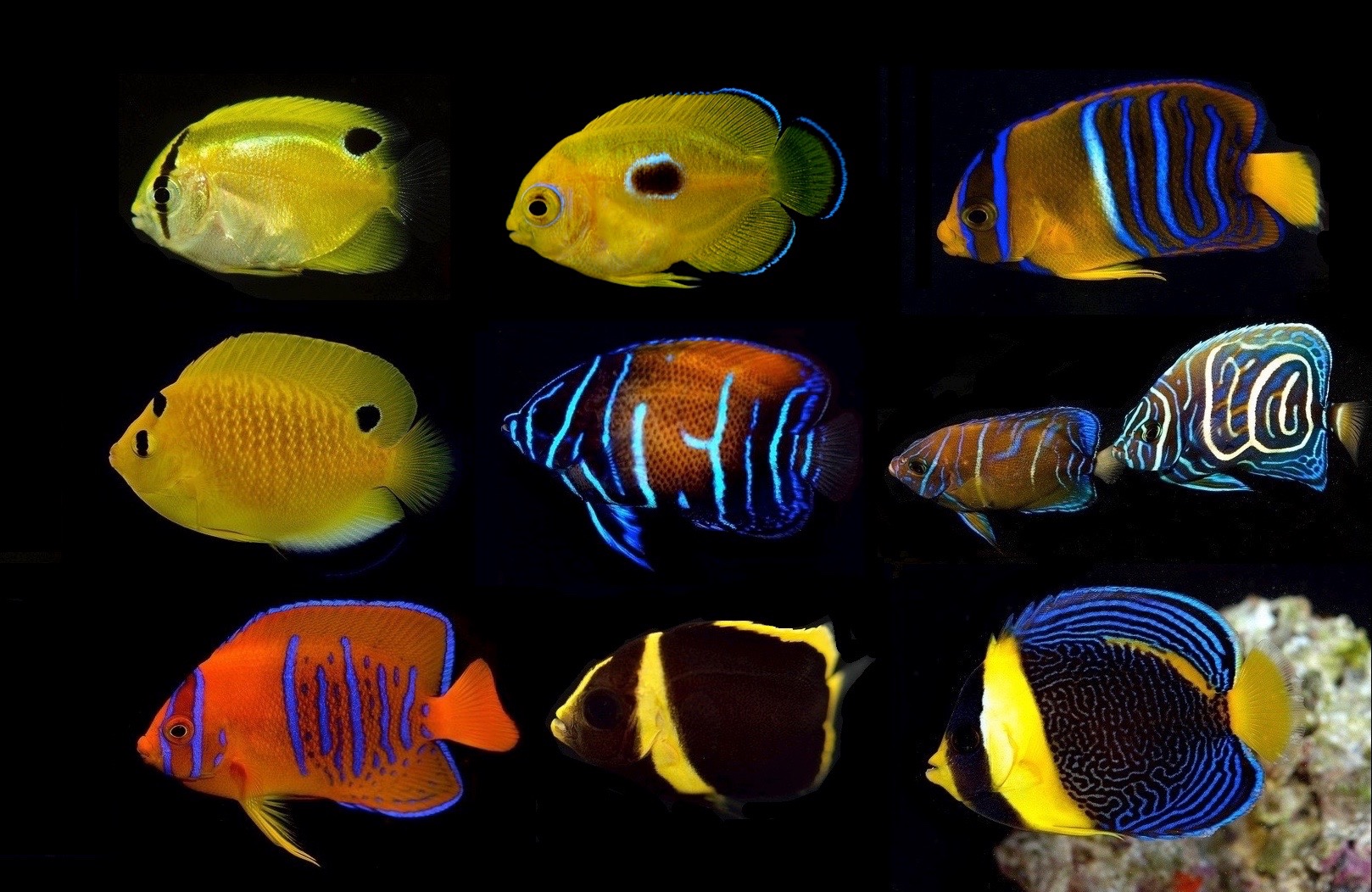 C. flavissima follows the very recent success of Pomacanthus navarchus, and is officially the tenth angelfish raised entirely on cultured foods in captivity by Bali Aquarich. It would probably be awhile before any real numbers hit the market, but knowing Su’s dexterity in his craft, it won’t be too long for that to happen.