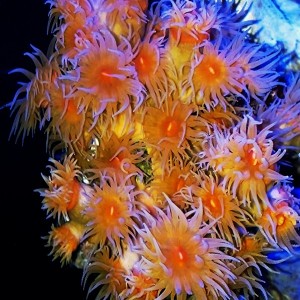 Large polyp (LP) non-photosynthetic corals (NPC) are some of the easiest NPC to keep, although they do require a little extra care. They’re relatively forgiving in regards to water quality and can go much longer between feedings compared to their other NPC counterparts. Most only require feedings a couple times per week to survive, but all will grow faster if fed more frequently. They prefer meaty foods such as Mysis shrimp, krill, silversides, squid, clams and similar food items. Pieces of any of the aforementioned foods should be of suitable size for the polyp you’re feeding; you wouldn’t want to feed a polyp of Tubastrea coccinea full silverside, but you could cut it up into very small pieces and make their day. 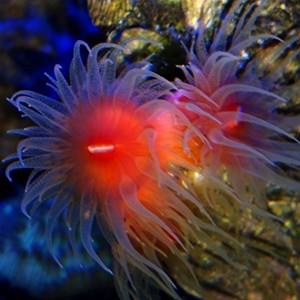 Introduce NPC to your aquarium as you would any other coral, first acclimate to water parameters, inspect for pests, and dip accordingly. There are several predators that feed exclusively on certain NPC coral such as nudibranchs and snails. Unfortunately for us, these predators generally retain the color of the species they eat. As with any inhabitant we introduce I highly recommend a rigorous quarantine protocol. Once in the aquarium feed the tank as you would any day and watch for the polyps to open. If they open, feed them! Keep in mind that polyps do not need to be fully extended. If you see even one tiny tentacle peeking out of the corallite, feed it. The polyp will begin to fully open in due time. In my opinion spot-feeding new acquisitions is the best means to feed these corals. Spot feeding makes it easy to control how much food is going into the tank and ensure that no food goes to waste. Spot feeding can be performed with a Kent SeaSquirt (with gray tip removed), turkey baster or eye droppers. It is important to attempt feeding every polyp, as its thought that colonies only share stored energy. LP NPC store Nitrogen and Phosphorous within the skeletal body, which is one way they survive long transit times or lack of food in the wild. Spot feeding can be tedious, but you will develop a routine that should only take a few minutes.

Sometimes polyps won’t open for you initially. If they don’t open after a few days you’ll want to take action to get nutrients to the coral as soon as possible. It’s now time for the Tupperware method. This involves removing the colony from the tank and placing it into a small Tupperware container with water from the main tank. Place some food in the Tupperware such as a cube of brine shrimp, Cyclops or some mysis shrimp, then gently stir. Let the coral sit in the Tupperware for at least fifteen minutes and watch for the polyps to start extending. If polyps extend, feed them! If not, add a bit more food to the Tupperware and wait a while longer. Keep in mind if you move the coral or Tupperware at all while waiting, the polyps will likely not extend for you. 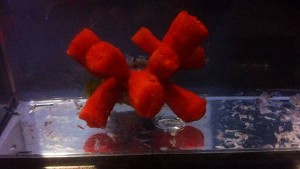 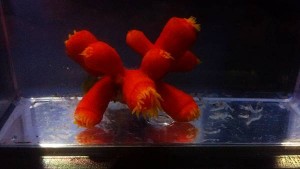 I have let colonies sit for well over an hour soaking in the Tupperware with no ill effects. If for some reason the coral does not extend its’ polyps at all, gently shake any food off the coral, remove from the Tupperware and place back into the aquarium. Try again in a day or so and eventually it will open for you. Be patient with these corals, remember they have had a long trip to get to us. They’re collected by a diver, taken/shipped to an exporter, shipped to the wholesaler/importer, then shipped to the retailer where they often sit a considerable amount of time, and finally bagged up and taken home. Generally during that entire period they are never fed, causing them to be emaciated by the time we get them and reluctant to feed. By following the Tupperware method you’ll have a happy, healthy coral in no time.

A common misconception regarding LP NPC is that they must be kept in the shade. Most of the LP NPC we keep is out-competed by photosynthetic coral in the wild due to their slow growth rate; therefore they must reside in the depths. I have personally seen Tubastrea faulkneri while diving with polyps fully open in direct sunlight in less than ten feet of water. Also, in nature these corals are obviously not spot fed by a turkey baster, they rely on zooplankton and other small critters to feed on, which only come out of the rocks at night. This is why many newly imported LP NPC will only extend their polyps at night. On that note however, some NPC can sense light (Balanophyllia sp., for example). Any coral that is light sensitive should be kept in a very low lit tank or under overhangs so you can still enjoy their beauty while open. 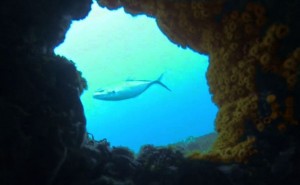 One thing to watch for while keeping LP NPC is high [detrimental] nutrient levels. As with any aquarium you have to make sure that all nutrients imported (feeding, source water, etc.) are exported (water changes, skimmers, refugiums, probiotic systems, etc.). LP NPC are not as finicky when it comes to Phosphate and Nitrate levels as say, Acropora species are, although if Phosphate levels are allowed to climb to high it will inhibit calcification as with any [hermatypic] coral. Excess Phosphate and Nitrate will also cause nuisance algae growth that can over run slow growing NPC.

If you know a retailer that routinely brings in LP NPC and watches them wither away please give them some insight, or urge them to stop purchasing them. Many times you can rescue these wonderful corals from various stores, which is how I’ve collected most of my LP NPC. Happy feeding!