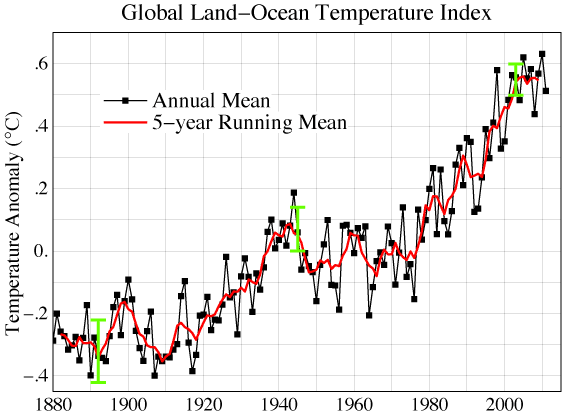 About a week ago, the National Climate Data Center (NCDC) at NOAA released the State of the Climate Summary for 2011.  Now that the year is over, we can look back and see how the state of the climate compares in the context of the entire instrumental record that began circa 1880.

The report is available here: http://www.ncdc.noaa.gov/sotc/global/

So how does 2011 stack up? It tied 1997 as the 11th warmest year on record. Or, put another way, the 11th warmest year globally since ~1880. This in itself is not so remarkable with respect to climate change. What is far more alarming is that 2011 was the 35th CONSECUTIVE year that the global annual average temperature was above the average of the 20th century, and every single year in the 21st century falls within the warmest 13 years out of the entire instrumental record!  There was only one year in the entire 20th century that was warmer globally than 2011, and that was 1998 with its catastrophic El Niño.

The Goddard Institute for Space Studies (GISS) analysis places 2011 as the 9th warmest year on record with 9 of the 10 warmest years occurring in the 21st century. Their site provides an excellent overview of the climate extremes that the planet faced in the last year in addition to how various pieces of the global climate system fit together to make 2011 the year that it was:

The figure above from GISS provides spatial context for the temperature anomalies of 2011. Note that the location of many of the warmest sea surface temperature anomalies are in coral reef zones. The Caribbean, the Indian Ocean, and in the Pacific: the coral triangle, and the west Pacific from the Marianas down along the northern coast of Papua New Guinea, through the Solomon Islands and Vanuatu and southeastward to the Fiji, Tonga and Samoa regions. This crystalizes the fact that coral reefs still face a global threat in the form of sea surface temperature warming.