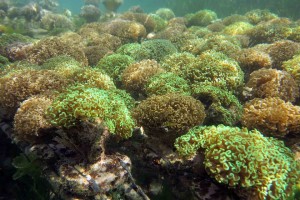 One of my favorite pastimes [besides diving] is perusing through the never-ending pictures of reefs in nature. It’s hard to believe where some of our favorite corals grow, often in vastly different environments than what we create in our glass boxes. Over the past decade, we’ve seen a surge in both the aquaculture and the mariculture of coral. While some people interchange the terms freely, to me they are two unique and distinct designations: maricultured coral is farmed in the ocean; aquaculture denotes coral farmed in captivity. With social media being such an easy way to connect these days, coral farmers of all types can share their work quickly. Recently, I was talking with Bali coral farmer Endang Nilsari about some maricultured Euphyllia sp. he and his team are working with.

Endang grows all types of corals in the ocean: Acropora, Acanthastrea, Blastomussa, Echinophyllia, Euphyllia, Lobophyllia, and more. Since I have a soft spot for Euphyllia sp., these pictures of lovely mini-colonies riding the current on a metal rack in the ocean made me whimper. It came as a surprise to me that the Euphyllia pictured is grown in one of their “low water farms” at a mere 2 meters (~6-7 feet)! After mentioning that that seemed like a ton of light for this genus, Endang noted that the “special metallic” colors were grown on a “deep farm” at 8-10 meters (~26-33 feet). I’ve noted in captivity that most Euphyllia do best under moderate lighting, which to me is a couple overdriven blue T5 bulbs, or about halfway up in most reefers aquaria. 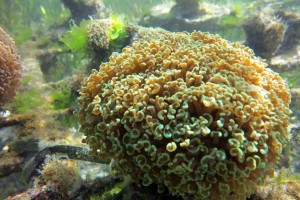 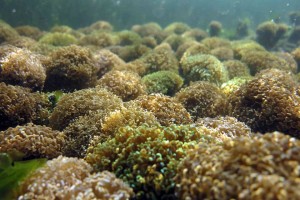 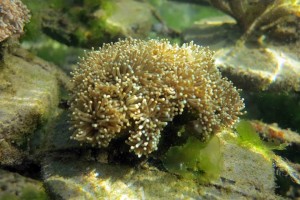 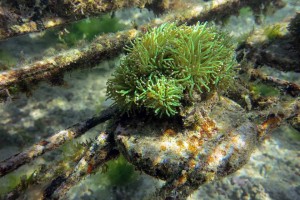 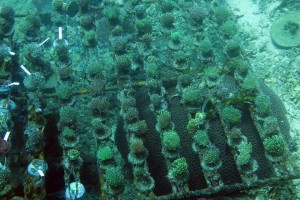 Note the massive “Favia” hanging out beneath the racks.

We’ll be taking a look at some other maricultured corals in nature here soon, stay tuned!