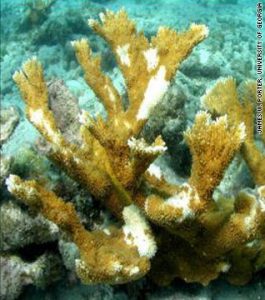 In a recent study, published in a top scientific journal, a group of researchers from Florida and Georgia have documented damage to sensitive Elkhorn coral (Acropora palmata) from bacteria contained in human wastes. In the paper by Sutherland et al, published in PLOS One, the group identify the common bacteria Serratia marcescens as the culprit. In humans this is generally considered to be non- to mildly pathogenic and is often seen in homes and moist environments as a pink to reddish growth or stain around water sources such as faucets. In some cases human infections are caused and these include urinary tract infection and sometimes more severe diseases as pneumonia and meningitis in immune compromised, or otherwise ill, individuals.
With regard to the coral reef in the Florida Keys where this study was performed, human wastewater that is insufficiently cleaned and decontaminated is leaching this bacteria into the environment. Using a combin ation of studies from the field, and experiments in the laboratory, the group shows that some types of the Serratia bacteria are able to survive in excess of 20 days floating in the sea water- but can infect, colonize and persist for long periods in tissue of Acropora palmata leading to localized bleaching. Separately, using DNA identification techniques akin to those used in forensics, they have also shown that diseased corals in the wild are colonized by bacteria known to be present in the wastewater- clearly establishing the human connection. In addition, they provide evidence to suggest that once colonization occurs, the bacteria can persist on the reef in an asymptomatic state in other coral tissue and may potentially lead to infection at a later date.
The manuscript is an interesting read that can be understood by most laypersons. Its conclusions are chilling though. We, as humans, need to take note that we can no longer treat our local environment in such a poor way. The results of this study should be used as a call for further improvements in waste water treatment beyond those already instituted by the State of Florida and pressure should be made to bear on other nations dumping waste into the Caribbean and other coral containing seas and oceans.