In a continuing string of brutal stories in a devastating 18 months for world coral reefs, a new paper in the high impact journal Nature Scientific Reports, by William Precht and others of Dial Cordy and Associates and the University of Miami, documents the “highest disease prevalence on record” in the midst of an outbreak of White Plague Type II that began in September of 2014 off of Virginia Key, Florida. 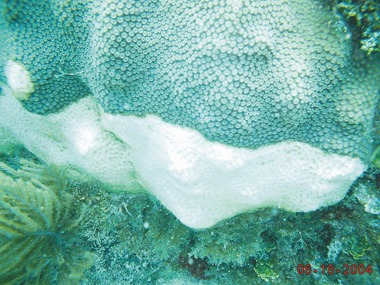 Let’s take a step back and examine White Plague Type II for a moment. Described in 1995, the Type II was to distinguish this plague from an earlier described event in 1975. The disease progresses pretty much exactly as it sounds, white areas or spots of freshly exposed dead skeleton spread in a ring like fashion as surrounding tissue dies. It is important to point out that this is a separate disease than the White Band Disease complex we commonly associate with the death of Caribbean Acropora species. There is no obvious, clear microbial community unique to the band of receding tissue, and current thinking places it as a common symptom of opportunistic infections in a stressed coral. It is not even known for sure whether the disease is contagious. Originally confined to 17 species, White Band Type II has become the most widespread disease in the tropical West Atlantic ecoregion, infecting 41 different scleractinian coral species. It is also the most lethal, killing large colonies in 1-2 days. Fortunately, at least in the past, in general the disease has a low incidence (<10%) even during outbreaks.

Coral species in the Miami-Dade reef tract began to bleach severely during the elevated water temperatures in the summer months of 2014. As many of the corals began to recover from bleaching between September-November of 2014, White Plague Type II began to appear in heretofore unseen, epidemic prevalence on coral colonies specifically tagged for permanent monitoring. By the summer of 2015, 40% of all monitored coral colonies were symptomatic. One hundred percent of the four species Meandrina meandrites, Dichocoenia stokesi, Colpophyllia natans, and Pseudodiploria strigosa were infected. Time swim surveys beyond tagged colonies showed 21 different species had recently experienced (within 2-3 months), or were currently experiencing, a plague incidence rate of 81%. The geographical extent of the outbreak spans a full 130 km of reef tract.

The take home messages here are that one of the most lethal coral diseases documented has very suddenly appeared at unprecedented levels, and does in fact appear to be contagious and potentially water-borne. For perspective, every single coral of every single species observed to be symptomatic with White Plague Type II experienced complete colony mortality. Susceptible species were reduced to less than 25% of their initial populations in the study area, and the infection spread in the direction of the northward current. The major driver of incidence in this outbreak, and others, appears to be thermal stress and bleaching immediately preceding the widespread documentation of infected colonies. Ultimately, bleaching and following disease may dramatically and rapidly alter the species distribution and coral coverage of affected coral reefs in the Caribbean and broader tropical West Atlantic region.

The original study can be found here as an open-source manuscript.