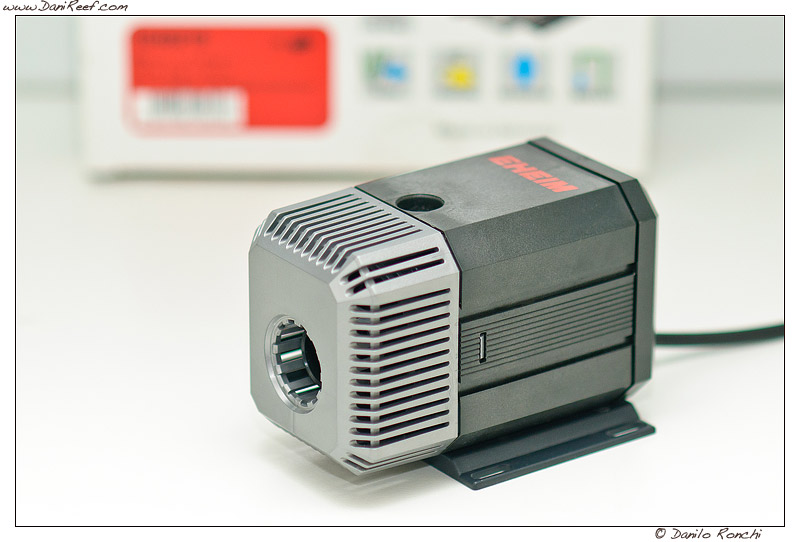 Let’s start with this article to speak about the numbers resulting from our tests, following the introduction that you can read here: Return Pumps: tests and real measurements compared, now we begin to analyze the first pump we had from Eheim, the Eheim 1048.

Certainly it is not definitely suitable for use as a return pump in any aquarium given the low delivery head, but it’s worth a test, also to compare it with small sicce pumps that we’ll have to test. 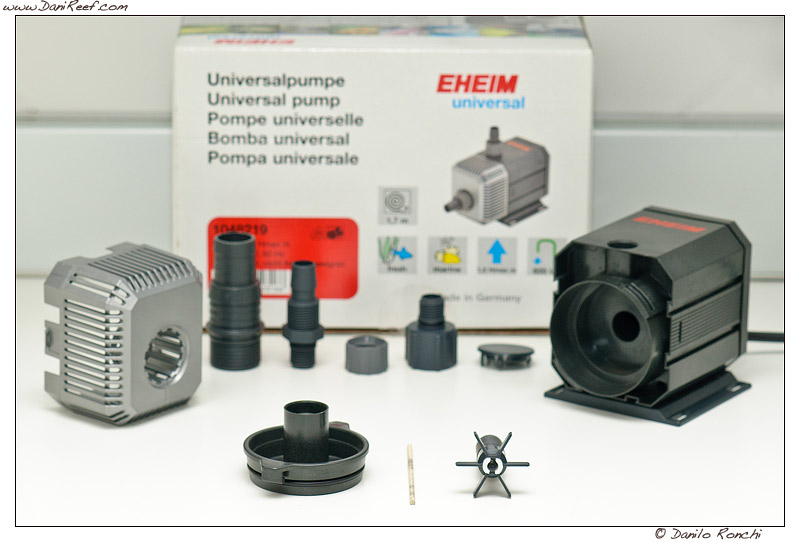 Our test began literally in my garage, where we tested all pumps we have received, not only this, in a single session.

The workforce was composed by DaniReef, AndreaNegu and Giuseppe, along with Ivan, who was involved in the photographic record. 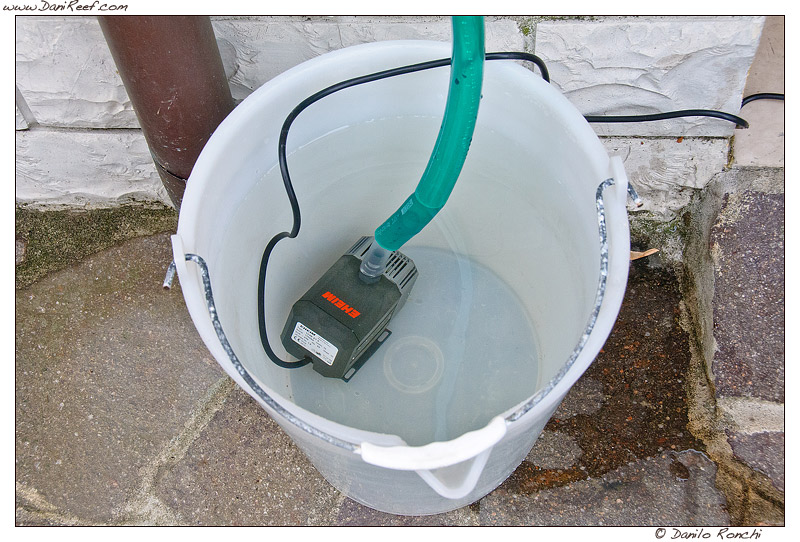 
The first test we did was to measure the delivery head. The test is very simple to accomplish. We dropped the pump into a bucket full of water, we connected the pump to a garden hose plastic held vertically, and we measured the height reached by the water column from the ground. We then removed the height of water in the bucket, given that the delivery head is the distance between the two levels of water.

Let me point out that, contrary to what one might think, the level in the pipe was not fixed, but fluctuated noticeably. 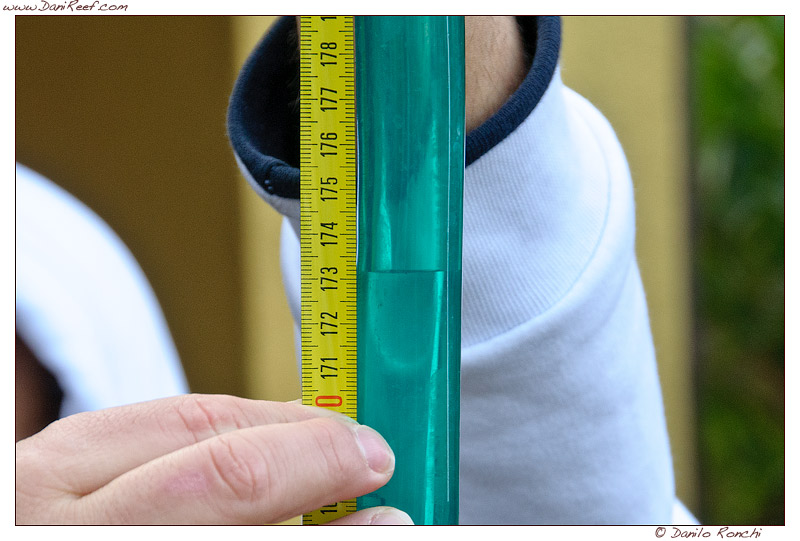 Measure the pump output is however very complex and the result was only approximate but still useful for comparing similar pumps. Placing in fact a pump in a container, its output was affected too much from the prevalence present in the bucket itself, and thus the decreasing the water in the container fell also the output. In any case, we measured the time it took each pump to fill a 12 liter tank, and run 3 measures was averaged, and then we divided the time obtained by 12 liters, resulting in a capacity not perfect, but significant, especially for the comparison. The outout normalized to zero head through a trigonometric calculation reported a flow rate equal to 868 l/h (against the 700 declared). As mentioned in the introduction, this number is misleading because the test was conducted in an unscientific manner, but we will measure everything with a calibrated instrument, as we report later in the article.

In fact, we have seen how, in this particular test condition, the smaller pumps have recorded the best performance, and vice versa, this is probably due to the increased incidence of prevalence with less powerful pumps.

During the test of delivery head we also measured the power consumption with current clamp, but as it was also impossible to measure the power factor, the offset between the real and apparent power, the result is only and exclusively as a curiosity. 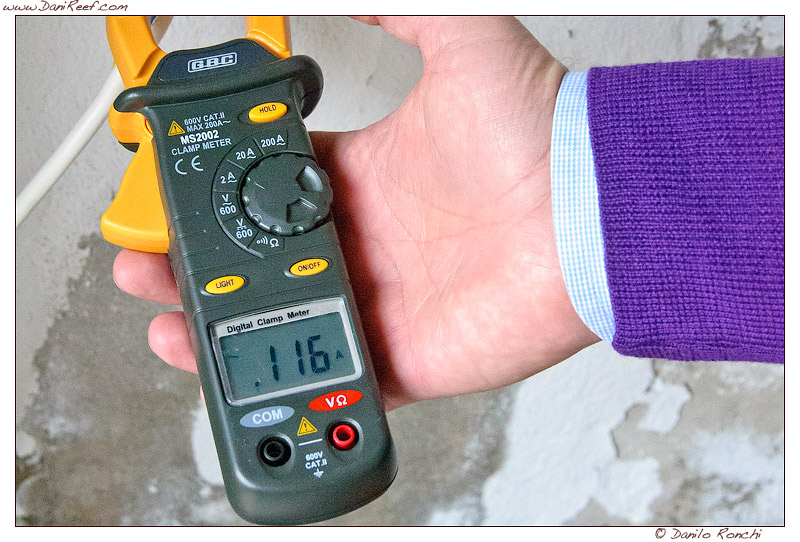 At this point we wondered if we could do more, and for this we came to meet the sicce, thanks to Federico Carraro, has made ​​available all its instruments of measurement.

I and AndreaNegu then loaded all our pumps in the car, rather we have remedied even two Eheim 1250 and 1260 which we considered a very interesting test and we went to Padua to make the measurements.

We should note however that all the measurements made in sicce were performed with a supply current at 230V as standard of measurement in Europe, so keep in mind when you read the results. 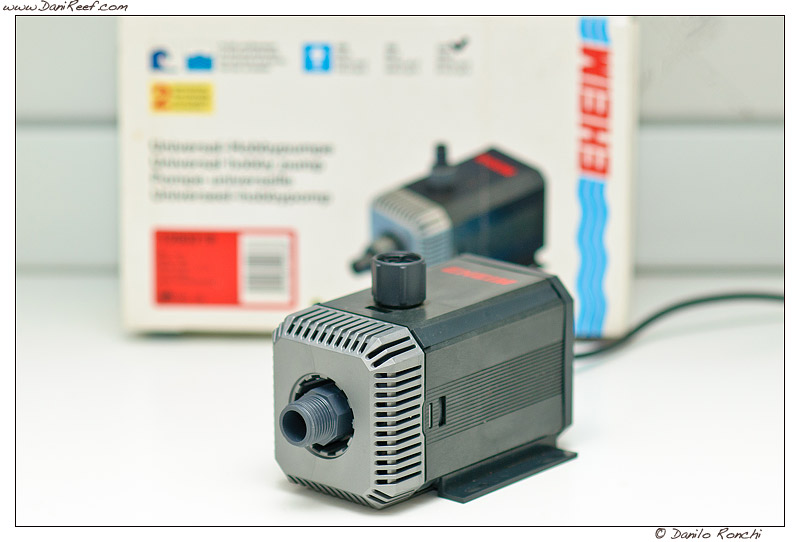 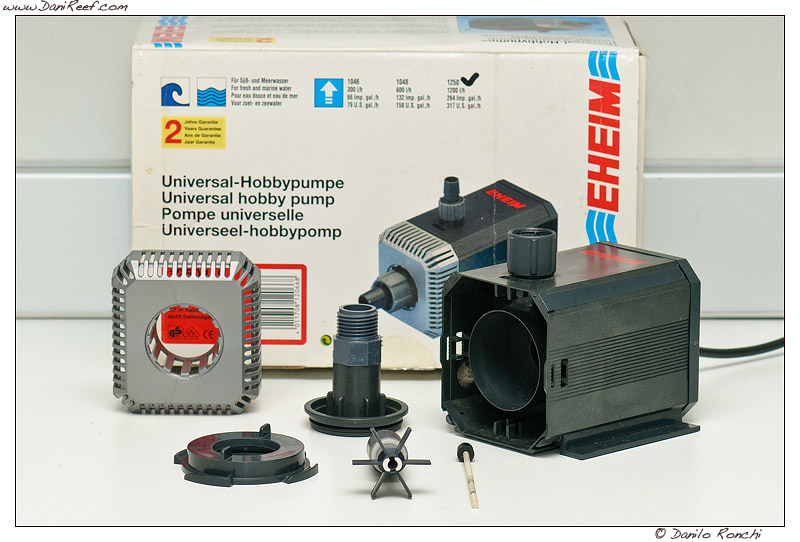 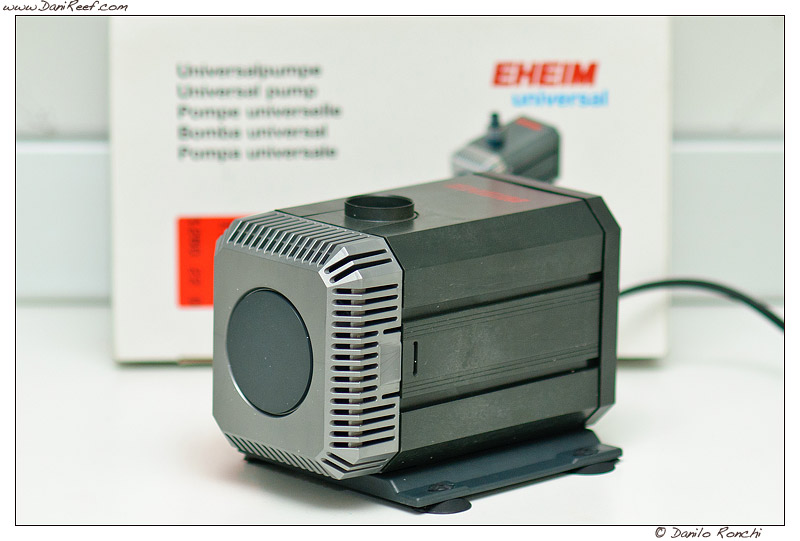 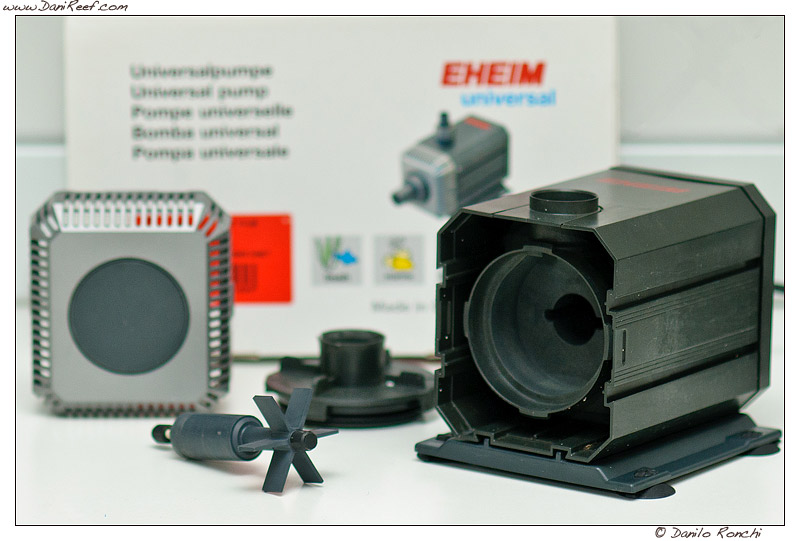 We tested the three pumps with flow meters and delivery head meters of sicce and these were our measurements: 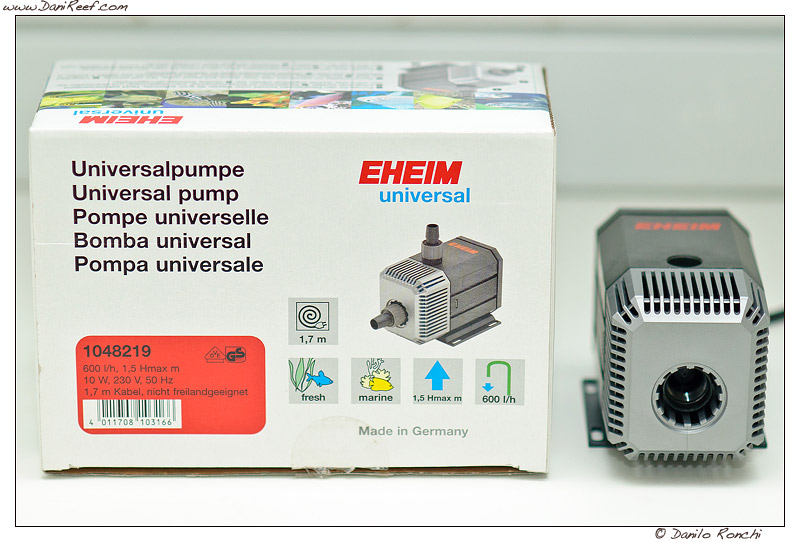 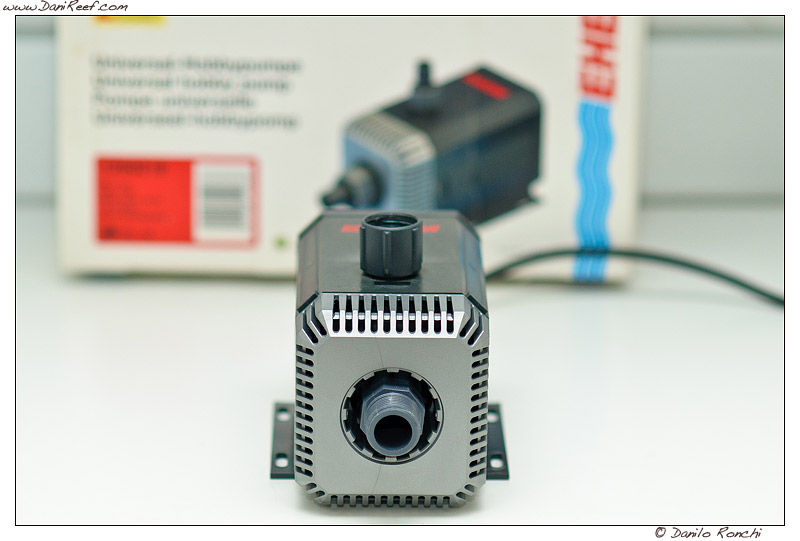 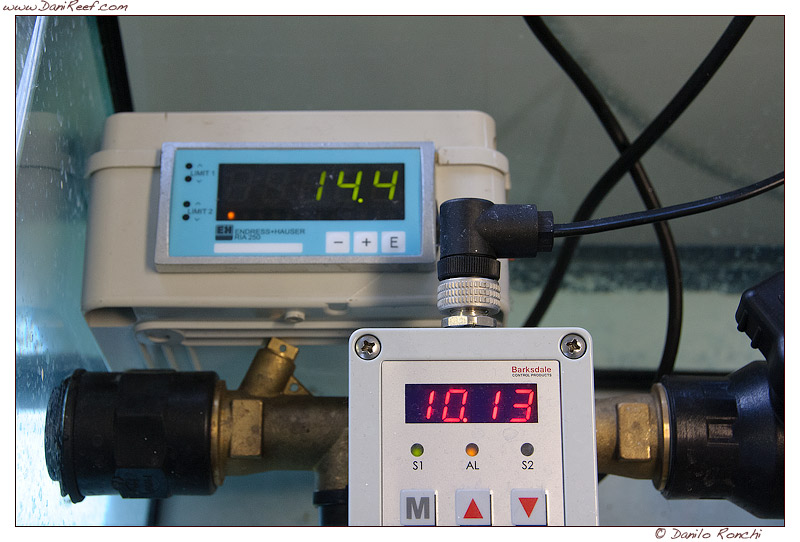 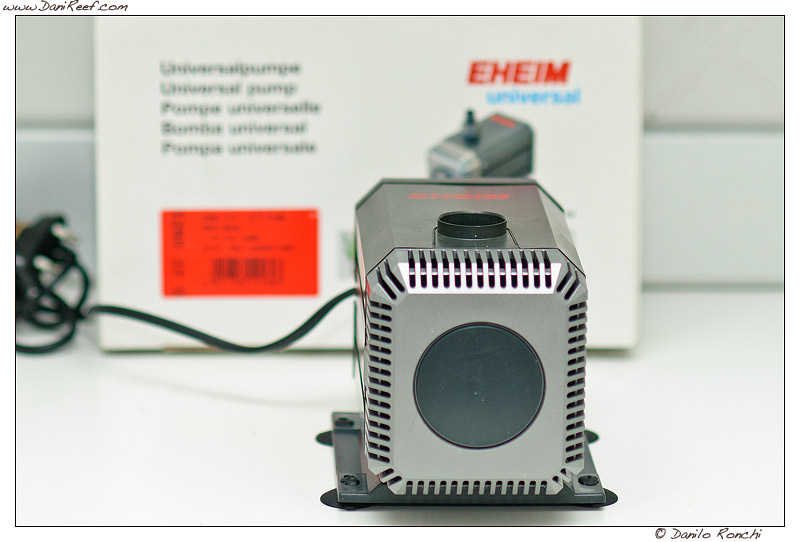 note: the measured head has to be corrected by adding 20 cm which is the value read by the system when pump is off 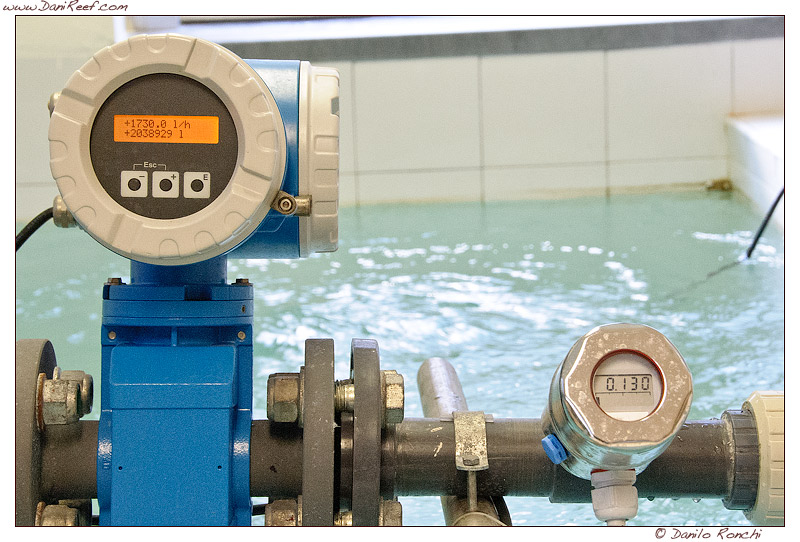 Output measured at 150 cm of delivery head: 1.730 l/h (note: the measured head has to be corrected by adding 20 cm which is the value read by the system when pump is off)


And finally here is the summary data of Eheim pumps:


The measure of delivery head ​​has given us very positive values for the Eheim pumps, since all three pumps are very near to declared values, with max 5% of deviation. I still have to remember that both pumps 1250 and 1260 are not new.

The output rate has given us very positive values ​​for the Eheim pumps, since both the 1250 1260 have fully complied with the stated values​​, while the 1048 differs by just over 10%.


The measure of consumption has been extremely positive, since all the pumps tested exhibited a lower power consumption to the data declared, with two smaller pumps, the 1048 and 1250 with even lower values ​​of more than 15%.

Values ​​recorded at 150 cm of delivery head (more or less)


The measurements made at 150 cm are indicative of a range that we have in our tanks (in this case only the 1260 has 150 cm of delivery head), both as regards the output, for what concerns the power consuption and therefore the cost, calculated here at a cost of 0.26 euros per kwh, everyone can divide that value by 0.26 and re-multiply for the value they currently pay.

Finally, just as a comparison, we give a matching value compared to data reported by the various pumps


We can therefore say that all three Eheim pumps are suited to the data declared, with the Eheim 1250 which won the scepter of the pump closer to the data reported. In any case we can only promote to honors all three pumps, you can see in the next image in a compact formation. 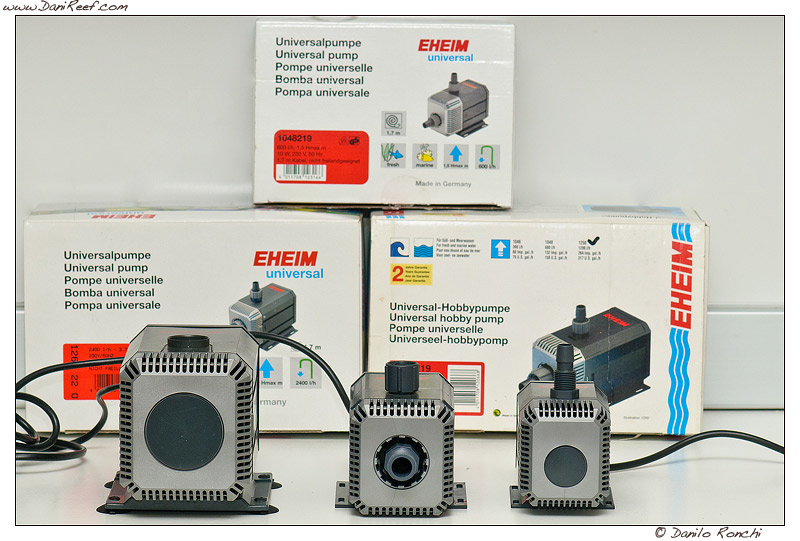 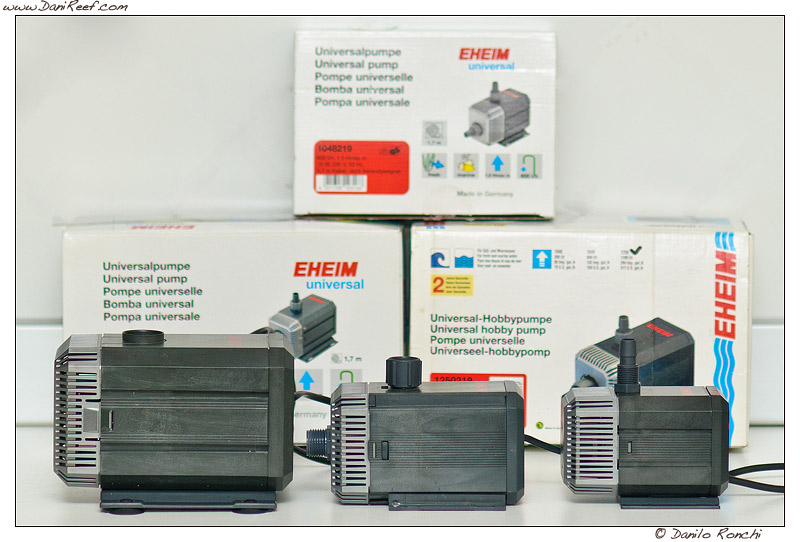 Many thanks to Eheim for providing us the Eheim pump 1048 subject of the test, and sicce for the provision of the laboratory where tests were performed.