Even now, do Moorish Idols remain impossible to keep? 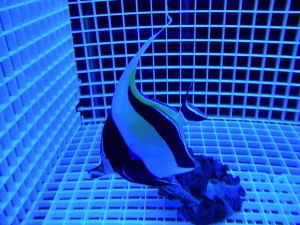 The Moorish Idol has eluded aquarists for a long time. It’s interesting, because idols aren’t particularly rare, exclusive or expensive fish. In fact, when compared to many common marine fish, they can be purchased relatively cheaply. Perhaps this fact works against the idol, as their low price makes aquarists more likely to experiment with them. Moorish idol survivability in private marine aquariums couldn’t be much worse. While some idols do survive in the hands of experienced aquarists, (and by some I mean a tiny percentage) the vast majority imported into the trade perish, even under the best circumstances. Many outlets no longer import Moorish idols, and years of utter failure have made many aquarists ask the question if they should be imported into captivity at all. Are Moorish idols truly impossible to keep? What separates them from the masses of marine fish that can adapt to captive life? Should even the most advanced aquarists shun the idea of keeping idols altogether? 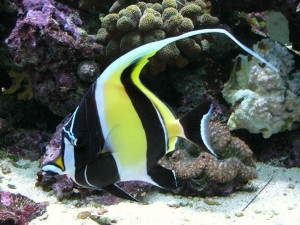 During my years aiding fellow aquarists, I’ve been involved in building and designing several aquariums, for the sole purpose of housing Moorish idols. In fact, I attempted keeping the species myself with limited success many years ago. I learned a lot about the species during this period, and was shocked to find out that certain traits appear shared by all idols. These traits involve an innate inability to adjust to captive life, mainly due to the fish’s reaction to stress.

Moorish idols are named from the Moors in Africa, who were medieval Muslim inhabitants. The Moors believed the fish brought happiness and luck. Ironically enough, for many aquarists who have attempted keeping idols they have brought heartache and frustration. In the wild idols prefer flat reef beds, often on the fringe of a reef lagoon or where the reef crest drops down and evens out. Their diet consists of algae and sponge, both of which grow in abundance in this zone. They’ve been recorded at depths of up to 600 feet, and are spotted in shallow water, no deeper than 10 feet. Moorish idols travel both alone and in schools, being active during the day. At night, idols discolor, appearing drab and blending in with the surrounding rocks.

It’s worth noting that nothing about idol’s natural behavior throws up any red flags, when considering keeping them in aquaria. They are the only member of their family and are believed to have descended from the prehistoric Eozanclus brevirhostris. To an aquarist, judging from their wild behavior, Moorish idols represent a fusion between a butterflyfish and a surgeonfish. They aren’t too much like one or the other, but have characteristics and traits of both. While both surgeonfish and butterflyfish require a higher level of care than say a clownfish, both species are easily kept.

What is it with idols? 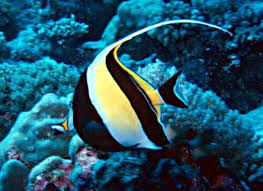 Idols are a delicate and graceful fish, which is part of their allure. Watching a Moorish idol glide across a reef is a lesson in grace and beauty. They are unique and have become a hallmark of anything decorated with sea life, such as towels, shirts and magnets. Idols are highly recognizable, even to those who aren’t familiar with fish species. During my time trying to keep idols, I theorized that perhaps their grace was also their downfall, where captive life is concerned. Idols are truly delicate and never seem to adjust to captive life. When working with them, it seemed like they were always suffering from severe anxiety. Fish are notorious for attacking weaker links in aquariums, which takes place, even when species kept with an idol are usually passive.

A mix of constant stress and inability to adapt seemed to create a scenario where the idols behaved constantly like fish whom were first introduced into the aquarium. This of course trickles down to feeding. In my experience, Moorish idols did eat. This is of note since diet and feeding are often highlighted as major contributors to their dismal survival rate. For feeding I used a frozen angelfish blend, enriched with sponge and soaked in both garlic and selcon. I found that idols quickly accepted this blend along with freeze dried seaweed clipped to a rock. The problem was that they didn’t eat with any reliability. Sometimes they would eat really well, other times they would not and often the idols would go days without eating. Eventually they would resume eating, but the constant hunger strike would become noticeable in the fish’s condition. At the time of purchase, it’s not uncommon for idols to have the tell tale mid-section of a malnourished fish. It took several months, but even with somewhat frequent feeding, the idols I kept eventually started showing signs of nutritional peril.

Sadly even idols that eat well often wither away. It’s led to aquarists theorizing that something is missing in the captive diet, which the idols require to survive. It could be any number of factors and was often believed to be sponge. Today, it’s not uncommon to find diet preparations with various sponge species, but it’s always dead, frozen or freeze dried. Even more interesting is that New Life Spectrum food creator Pablo Teapot has had tremendous success with Moorish idols, once they begin feeding exclusively on his food. I struggled to get idols to accept frozen food and had zero luck transitioning them to pellets. New Life Spectrum has been hailed as a great “all around” food for a variety of fish and many advanced aquarists keep it as the only pelleted food in their arsenal. It’s curious what the food might contain (single ingredient or variety of ingredients) that would garner such a response from idols.

The stark reality is that many idols apparently starve, even when they’re eating.

So how can they be kept? 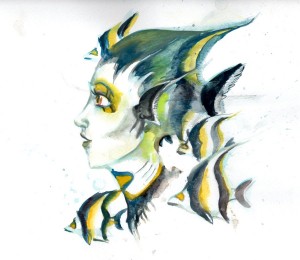 Successfully keeping a Moorish idol requires planning, everything from before the fish is purchased on up to its captive environment must be accounted for. Those I’ve guided to success with idols, were willing to create an idol specific tank. In this scenario the aquarium, filtration and every aspect was totally tailored to keeping Moorish idols. In my experience, it’s the only way to make it work.

A tank of 200 gallons or more makes a good environment for Moorish idols. It’s best to plan on keeping at least a pair, but if you have a larger tank you can attempt to keep multiple pairs. Idols often don’t do well alone in the aquarium, and crammed in with other species often causes strife from boisterous tank makes, should the idols lose some of their vigor. Idols seem to thrive in oxygen rich water, so this means a lot of circulation and powerful protein skimming. Surface agitation works well, as it provides ample gas exchange but doesn’t overburden the idols with a lot of current throughout the water column. It’s my personal belief that implementing ozone can be helpful when keeping idols, as it increases the aquarium’s ORP (oxidization reduction potential). There is no scientific study I am aware of that makes this claim, just my belief that ozone helps promote water quality.

Idols like an environment not unlike that suitable for butterflyfish, with ample areas to find refuge and rock work they can hide in at night. Keeping the tank well packed with live rock is a good idea, but make sure there is plenty of open swimming space as well. Idols like to cruise through the water column, while stopping to nibble here and there. Idols are known to pick at corals, so I wouldn’t recommend setting out to keep them in a reef, however having invertebrates to clean-up the tank and the opportunity for sponge growth plus micro fauna is a good approach.

Seek out idols imported from either Hawaii or Mexico. This species is notorious from suffering severe stress during transit and its estimated a large percentage of those captured never make it to a wholesalers’ tank. Many that do arrive are emaciated and on the verge of death. Such individuals should not be purchased as the chance of turning an already failing idol around are slim to none.

Since idols seem to do best when eating a highly nutritious pelleted food, it would be wise to put something in place to wean them off frozen or live foods and onto pellets. Pellet foods are often the most nutritious fish foods available, but also very difficult for various species to adapt too. Having a place within the tank free of rock or obstruction, which implements a feeding tube or similar apparatus is wise.

Tank mates are a matter of choice, but it’s best to allow the idols to become well established before introducing anything new. Often a year or more is required, for these fish to adjust to captive life. They are known to be sensitive to copper, which is another reason to keep them as the only fish species in the tank. This greatly limits the risk that the idols will be exposed to parasitic infections. 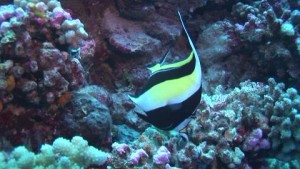 Weaning idols onto pelleted foods is often hit or miss. To make sure that nutritional deficiencies don’t arise, it’s often best to feed a bit of everything. A healthy idol actually feeds very well and will often accept a variety of foods. Frozen foods that incorporate an assortment of fare, such as LRS’ Reef Frenzy or Fish Frenzy are a good start and supplementing that with freeze dried algae is a necessity. If your idols are accepting frozen food, just slowly mix pellets in with the frozen, adding more pellets and less frozen with each feeding. Hopefully, sooner or later they will accept the pellets with as much gusto as anything else. The one pellet approach pioneered by Pablo Teapot is controversial as many aquarists believe a variety of diet is essential for any marine fish, especially idols. Pablo Teapot claims that New Life foods are so nutritionally rich that no other food is required. 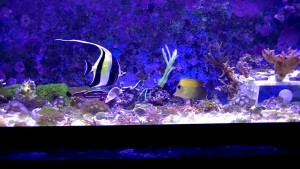 I don’t suggest that many, even very advanced aquarists attempt to keep a Moorish idol. To properly keep them, it greatly limits the scope of your aquarium. Keeping corals in conjunction with Moorish idols further difficulties, as idols tend to nip at corals. The reality of idol keeping is that that often you have the tremendous expense of a large tank, with filtration that can create reef capable water quality – but without the benefit of colorful corals. For a very select few, the allure of Moorish idols is enough to entice them to make the necessary sacrifices to have a tank capable of housing idols. It’s also worth note that long-term survival of Moorish idols is still a hotly debated topic. In most cases, a successful idol keeper is someone whom houses the fish for two or three years, maybe a bit more. When we consider that many fish species live in excess of 10+ years within private aquariums, you start to wonder if under any circumstance we are keeping idols healthy or just delaying their demise.