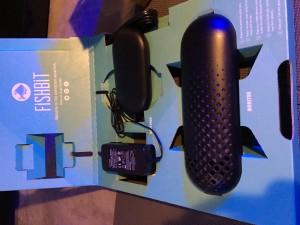 For the past few months I’ve been chatting with Nathan Levine, the founder of Current Labs and primary visionary behind Fishbit. As many of us know, Fishbit aims to be a simple, easy to install, trouble-free aquarium monitor and controller. In conversations with Nathan, he has likened Fishbit to many of the smart devices available for our home. The idea is that the controller simply connects to a wireless network and begins transmitting data to a mobile application. The controller side of the system works much the same way, giving the aquarist full control over six devices. Recently Current Labs began shipping beta versions of Fishbit off to Kickstarter backers and early adopters.

Nathan was kind enough to send one my way, allowing me to see an early version of the device, install it and play with some of Fishbit’s features. While I haven’t had a chance to install the controller side of the system, I was able to get the monitor up and running. 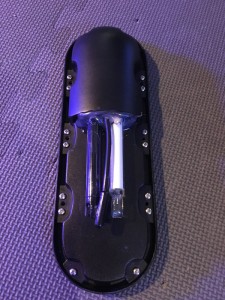 At first glance, the Fishbit monitor is a very simple device. There aren’t a host of wires, probes and other devices; just a thin black case that houses all the monitoring sensors. The beta version includes a wireless power back-pack, which uses a magnet to transmit power and hold the monitor on the aquarium. The consumer version of Fishbit will have a standard power cord, as this simplifies the installation and reduces the risk of problems associated with wireless power.

Other than that, there is one small AC power pack and cord, meaning the entire monitor is very small and easily tucks away in a sump or aquarium. The front cover of the monitor is removable, and you can see where the ph, salinity and temperature monitors all rest, with the brains of the unit being sealed up with silicone, leaving only the probe side of the sensors visible and exposed to water.

The device communicates its status via a bright, multi-colored LED light on the unit’s back, easily noticeable from within the aquarium or sump. Upon plugging in and starting up, the Fishbit light blinks blue, meaning it’s in wi-fi set-up mode, the light turns green when trying to connect to the internet via a wireless network and breathes a cool cyan once connected and transmitting. 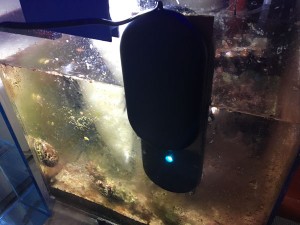 If you’ve installed smart devices like Dropcams, smart bulbs or wireless compatible Bluetooth speakers, you’ve installed the Fishbit. I mean that quite literally, as the Fishbit’s installation greatly mirrors such devices. The first step is downloading the Fishbit app, which for beta testers is only available by invitation via Apple’s Test Flight app store. Once installed on your iOS device, you need to ensure your device (iphone, ipad, etc) is connected to the wireless network you plan to add your Fishbit too. Plug the Fishbit in, and wait for the blue blinking LED. At this point you access your phone’s wi-fi settings and connect to a network created by the Fishbit. Once connected and upon opening the application, the Fishbit recognizes that it’s connected and allows you to select a wi-fi network and enter connection credentials. Once the light turns from blue to green, it takes about a minute for the Fishbit to establish connection to the internet. Once that happens, the light abruptly starts breathing cyan and the device is connected.

From the time of initial connection to Fishbit’s first reading, is about 10 minutes, give or take. Using the app, the Fishbit begins streaming ph, salinity and temperature data right to your phone. It also notifies you in the event temperature, ph or salinity fluctuate. I will need to adjust those settings, as the Fishbit has been notifying me when the temperature changes just .1, or .2 degrees. 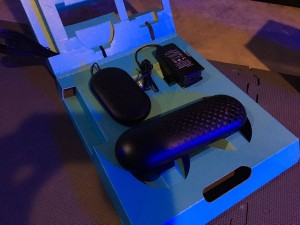 The Fishbit is surprisingly simple, both in design and in set-up. In fact, it’s much easier to set-up than any other monitors I’ve used in the past. That simplicity is good, in that it gives a tech novice the ability to easily retrieve important information about their tank, but for more technical and advanced aquarists, it may feel a bit limited. Hopefully as Fishbit evolves, the developers will add other features which can measure advanced water parameters, such as ORP or PAR. In speaking with Nathan, he told me that Fishbit’s development team was looking into automatic titration, which would allow the Fishbit to offer a host of testing to the aquarist. Naturally, these types of expansions are down the road, as right now Current Labs is busy getting the consumer edition Fishbit on the market, a feat they hope will be accomplished sometime next month.

For now, the Fishbit monitor appears to be a quick, easy and hassle-free way for technically challenged marine aquarists to get crucial data, with little more than a home wireless network and iPhone. As I play with the Fishbit more, and have the chance to test some of its features, I will update everyone. Once the controller is up and running, and I play with its functions, I will share that as well. I know many of you are counting on the Fishbit as a hassle free way to stay on top of important water quality fluctuations, and from what I’ve seen so far, it will likely become just that.