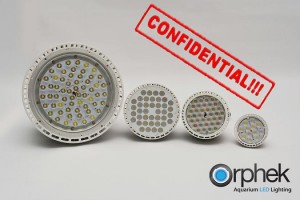 One of these things is not like the other! If you’re familiar with Orphek’s pendant lighting, you’ll possibly recognize three of these shiny LED aquarium lights. From right to left, you see the NR12 and PR72, both of which have been in the game for quite some time, followed by the Atlantik Pendant, which made its debut this past August at MACNA 2014 in Denver. But what’s that handsome beast on the far left?! 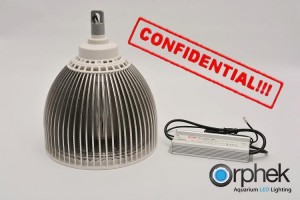 A new light!  A nice little birdy over at Orphek slipped me these super-top-secret images from their development team, and after a little prying I have to say this is going to be a very exciting release with applications that extend well beyond the home aquarium. I also have to say that I’m terrible at keeping secrets. While they wouldn’t dish on what the new member of the lineup will be called, here’s a few hushed whispers from my reliable source about the unseen (until now, that is) unit.

With this new light in the final testing phases, I get a feeling we’ll be seeing its debut in the very near future. Orphek already illuminates some pretty incredible reef aquariums throughout the world, and it sounds like with this release they’ll be reaching reaching new depths in the aquarium realm.