First day of diving in Borneo – Beauty and Dynamite 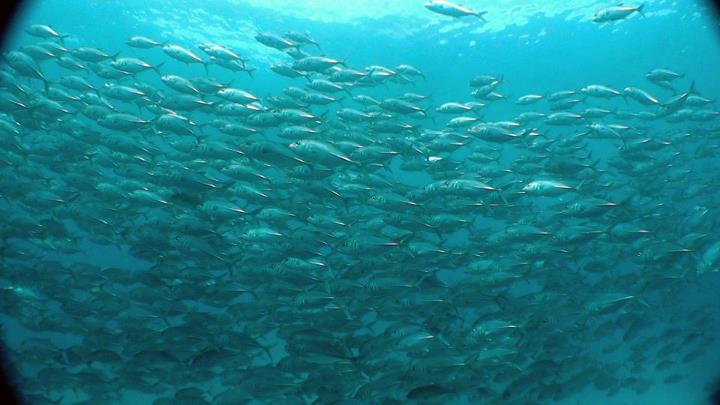 Photo Caption: This school of Jacks is beautiful, and would feed a lot of people.

After two weeks of slogging through the jungle, being forced to endure huge stick insects, wild pygmy elephants, several species of hornbills and a Tarsier, we are finally getting down to seeing some “good wild life.” (Ow. My wife just kicked me, but she knows I am kidding – the land portion of this trip has been astounding). So far we have dived house reefs of various resorts, all of which have artificial reef structures that are rather mature and teeming with life. Not only are they fantastic to explore, but it’s great to see local operations building habitat. Tomorrow we dive Sipadan Island, and I can hardly contain myself, but that has to be its own blog post.

I woke up this morning in my room on stilts built over the reef. From the font window I watched the sun peek up over the Celebes Sea and bathe my sleeping daughter in ‘sweet light’. I walked out the front door, and as I made way to the 5 star dive center, I watched the local village come to life. The juxtaposition between the luxury of the resort, and the stark substance lifestyle of the local community was sobering as I prepared for the first dive of the day.

Less than 30 minutes later, fishing village forgotten, we were diving paradise. My wife was swimming through a tornado of jacks when a tremendous KRACKKKKKKBOOMMMM shattered the idyllic experience. What the hell was that? The dive master and the 5 newbie divers with us didn’t react at all. To me, the sound was overpowering and terrifying. I hoped it was some kind of construction project, but the recent round of dynamite fishing and reef destruction in Komodo made me think it was not construction at all. Twice more on the dive, the calm was split by the jarring shock of explosions. The sound was unbelievable. It was awful to be surrounded by life and beauty but to know that animals and habitat were being destroyed nearby in the name of easy food. I was moved to tears both under water and now while I write this.

At the surface the local dive master confirmed that it was dynamite fishing but that it was ‘far away’ – sound travels far underwater. The aquarist in me was horrified, but I couldn’t help thinking as a father; my family has never gone hungry. It’s easy for me, with my first world values, to wish education and responsible practices would prevent this kind of destruction…but if my daughter needed a meal, I would do whatever I had to do to provide for her.  And, if I found a practice that worked, that ensured that my little girl would have a full belly at night, I am not sure what anyone could do to make me give it up.

It’s a heartbreaker. Lets keep that in mind as we are tempted to judge real world practices that we feel might impact our hobby of keeping reefs in our living rooms. We need solutions that fill bellies as well as fill glass boxes.

I was filming during the dive and I think I was shooting during the one or two of the explosions. When I get back to my computer, I’ll listen to the footage and if I have any of the explosions recorded, I will post a follow up. For now, I have to go prepare for another dive in some of the most beautiful reefscape I have even been on, and hope that I won’t hear any more destruction in the distance.