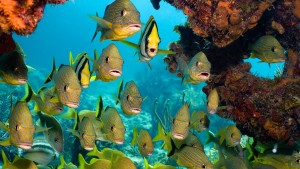 It’s long been touted that fish don’t feel pain. Aquarists may argue this point on both sides of the line. Some may believe that fish feel an entire array of emotions, while others would assume that physical responses to stimulus are autonomic, taking place without any subjective “feeling” driving them. As we move through the 21st century animal behavior science is gaining new traction. As stewards of a variety of our animal kingdom cousins, scientists believe it’s vital that we understand the conscious capacity within them, in an effort to understand how to better create a comfortable life in captivity. Notions about animal consciousness and feeling are often very different when looking at various species. For example, people often view the conscious capacity of dogs or cats, different than that of snakes or spiders. As science progresses, allowing for physical representations of conscious functions to be measured (using MRI and brain scans) we are learning that animals likely experience a vast array of subjective emotions, and species that lack a neocortex (such as fish) use different physiological features and organs to serve the same role.

This topic has been a scientific taboo for many years. Since fish lack many of the brain sectors associated with pain, discomfort and self-awareness, researchers simply assumed all their behavior was autonomic, not unlike a comatose patient flinching when touched with ice. Yes, there were physical responses to stimulus, but they were merely instinctive and reactive, there was no thought and certainly no feeling behind them. 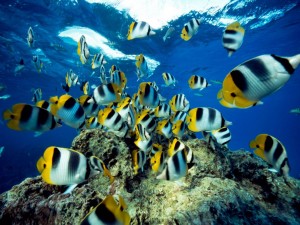 Today however, further research has shown that while fish lack a neocortex, their lateral line system combined with other organs play an advanced role in fish behavior. Researchers first wanted to learn if marine fish would choose a positive action, over one that would cause pain. In this trial, fish were exposed to a mild electric shock when they performed a certain action. Performing the same action another way, didn’t result in electric shock. Very quickly, the fish learned that one action caused discomfort and the other didn’t. While it may seem like this isn’t any breakthrough, in reality it is. If fish simply functioned on instinctual behavior, without a feeling or memory of pain, then they would perform an action the same way over and over again, reacting to the stimuli when it took place. Their capacity to remember that this caused discomfort wouldn’t exist. In the case of fish, they in fact remembered that one action caused discomfort and that the other did not, choosing to avoid the painful action altogether.

Researchers then wondered if at some level fish had opioid receptors. These receptors are vital in sending signals of discomfort through the body, warning an organism that something is wrong. Opioid receptors are tied in with a wide range of pain, emotional, physical and otherwise. If fish were simply driving with no one behind the wheel, an opioid antagonist would have no effect. Fish were exposed to discomforting stimuli and their response was recorded. An opioid antagonist such as morphine was administered, and the same discomfort was repeated. Under the influence of the antagonist, the fish either showed a reduced response or none at all. This leads researchers to believe that fish in fact have the capacity of feeling pain, which can be diluted just as it is in human beings, with opioid antagonist drugs. 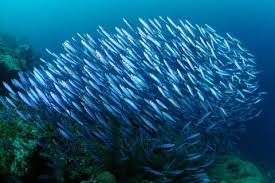 Researchers wanted to know how fish would react to substances that stimulated the pleasure centers of the brain, drugs like cocaine and others. In animals such as rats, it’s long been noted that rats or mice would choose water laced with cocaine over standard water. These tests have been used to study the implications of drug addiction in human beings while testing medications to relieve the effects of addiction. The capacity to become addicted to something that creates pleasure, signals that an organism is able to feel pleasure and also make a conscious choice to ingest something that creates pleasure. This also shows that an animal has long term memory of the effect of taking the substance and perhaps a physical craving to do so. While we don’t usually imagine addiction as a higher brain function, it certainly shows that an animal is “seeking pleasure” and not simply functioning only with automatic reflexes and actions. 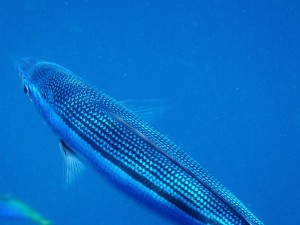 In the case of marine fish, researchers learned that fish would ultimately choose food that was spiked with a pleasure inducing, addictive substance. Even when regular fare was offered, the fish would make the choice to consume that which contained a substance, willingly seeking it out. In the eyes of animal welfare and behavior scientists, this means that fish have a capacity for pleasure and the willful ability to make a choice to feel it. To further progress this idea that fish are in fact quite “feeling” oriented creatures, scientists isolated fish that were showing signs of stress, either from environmental adaptability or trauma from collection. When provided with drugs such as Xanax or other stress reducing, calmness inducing agents, the fish’s respiration level slowed and their stress response lessened greatly, in some cases diminishing entirely. Researchers feel this could mean that fish captured from the wild aren’t only dealing with physical stress or possible injury and disease but a host of emotional stress as well. 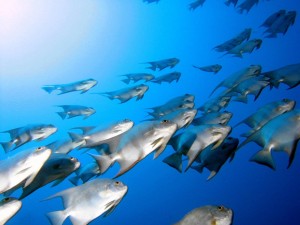 A theory has been applied, based on research into fish welfare and consciousness. Many fish collected for the marine trade exhibit similar symptoms which often result in death. This can include refusal to accept food (live, frozen or otherwise) inability to adapt to the captive environment, listlessness, wasting and others. These symptoms often lead other members of the aquarium community to assume the newly introduced specimen is weak and begin harassing it. Researchers believe this combination of symptoms, often blamed on inadequate water quality or possible parasitic infection is actually an emotional response to the trauma of collection. The intense stress of being collected, shipping and moved from one environment to the next before settling, leaves fish in such disarray that they fall into a state of apathy and depression, ultimately leading to their demise. Compiling this state with tank mates that greet them with aggression, fish suffering from PTSD are doomed in captivity.

The problem with animal consciousness:

Unlike Charles Xavier, we can’t enter the mind of our fish, experiencing life as they do first hand. Many of the organs and physiological properties that allow fish to experience a level of consciousness are far different than those of humans, or even other mammals. This means that what they experience could be far different from what we do. What research has shown is that the core ability to feel pain, recognize fear and seek pleasure is there. While we can view biochemical responses to animal stimuli using MRI or other medical imaging techniques, we can’t physically feel or perceive existence through the eyes of a fish. For that reason, the subject of fish consciousness is very controversial and quite under studied with study results being highly underappreciated.

What it means for aquarists:

In the world of aquariums, we often measure fish health and overall well-being on the basis of simple environmental and biological criteria. If water quality is appropriate, environment somewhat mimics nature and fish are consuming food and appear healthy, then we assume they are otherwise alright. There are countless cases when fish display a range of symptoms even though their physical and nutritional requirements are met. It’s noted that the vast majority of marine fish collected for the aquarium trade die within one year of collection, with large percentages perishing before even being exported to a wholesaler. 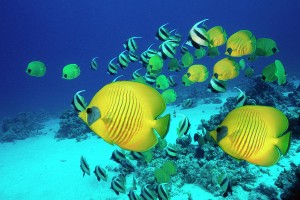 What if the missing link isn’t a physical or environmental problem at all, but an emotional one? What if newly collected fish need a host of special considerations, catering to feelings of fear, pain and sadness? More importantly, what if drugs could be developed that would aid fish suffering from severe stress or even PTSD, giving them more time to acclimate to a captive environment and ease restless, disturbing feelings that culminate in a variety of often fatal symptoms?

If we learn, without any scientific doubt, that fish are actually highly conscious and intelligent animals capable of a wide variety of subjective experiences – how would the aquarium hobby respond and what would we change? Most advanced aquarists offer their fish vivid replications of natural reef ecosystems. Though, a vast number of aquarists offer fish sub-par conditions with tanks far too small to allow them the environment they require. Animal rights laws are often drafted based on scientific research into specific species’ abilities to perceive the environment around them. If science shows us that fish possess the same array of emotions and feelings as the family dog or cat, would sticking them in a Fed Ex or UPS box and shipping them under conditions that could lead to death still be readily acceptable? Or the process of using a live fish to undergo the dramatically changing conditions within a cycling tank? Would a revolution of thought amongst aquarists and livestock suppliers take place, ushering in a new era of successful fish keeping, one that caters to emotions we previously believed fish didn’t even possess?