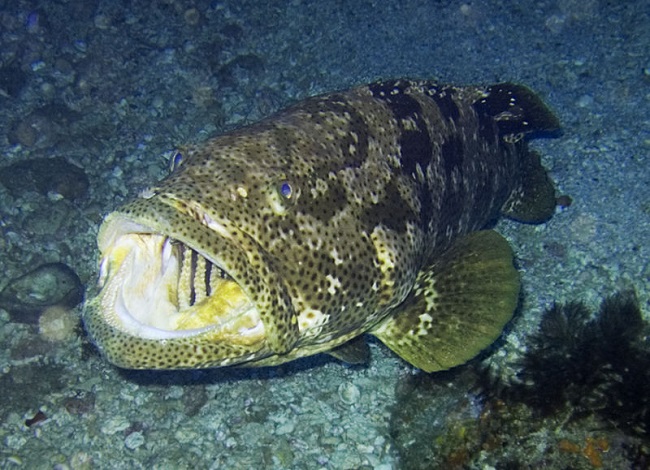 Groupers are obviously fearsome predators. They are enormous, with huge mouths and huge stomachs. They can also reach incredible burst speeds when lunging at prey. However, if they are unsuccessful in an ambush, the would-be prey item usually outruns its pursuer, slipping away fairly easily into the cover of the reef.

Still, in many cases, that is not the end of the chase. Using a hunting tactic recently described in the journal Nature Communications, certain groupers and coral trouts use a form of sign language to elicit the help of other predators.

By observing groupers in the wild, researchers discovered that rather than give up, these fish often generate a “headstand signal” by shaking their bodies while pointed in the direction of the hidden prey item. Eels (which can slither after prey into small areas) and certain wrasses (which can force themselves upon prey with their crushing, protruding jaws) understand this gesture well, and quickly employ their own skills to obtain the quarry. Similarly, coral trout are known to elicit the aid of certain species of octopus.

Researchers define the behavior of these groupers as a “referential gesture” because (1) it draws attention to some object, (2) it is not necessary for normal movement or orientation, (3) it is suggestive of some intent, and (4) it elicits a specific, voluntary response from a partner.

More information about this study can be found at:
http://www.livescience.com/29120-fish-use-sign-language-to-hunt.html.