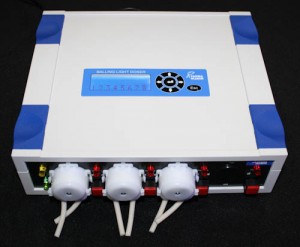 Dosing is a bit intimidating, isn’t it? Dosing pumps often look like they would be powering the terminator, not adding much needed elements to our reef tanks. When it comes to outward appearance of aquarium equipment, I would assume looks alone turn a lot of reefers in the opposite way of dosing. Most serious reefers dose their aquariums. If you keep corals, then it becomes mandatory, as corals utilize elements from marine water, quicker than we can replace them, with water changes alone. Two part dosing, I would fathom a guess, is still the most popular weapon of choice, when reef aquarists decide that dosing is required. It’s quick and easy, and you don’t have to fly to Vegas, to utilize it legally.

Let’s look at Mother Nature, and allow lessons from the field to shed some light on dosing. Coral reef water chemistry rarely changes. Reefs are one of the most stable environments on planet Earth. Changes on the reef, can mean bad news, which is why climate change so severely impacts coral reef health. So why would things be any different in our aquariums? Well, they aren’t. When we add all of a two-part supplement to our tanks, there is a consequence. The consequence that raises the amount of calcium and alkalinity in the water also causes a temporary, yet quick shift in water chemistry. Typically ph shoots up, and may remain that way for several hours, before leveling back out. Alkalinity is famous for the snowy cloud it forms, as it dissolves into the water. That snowy cloud, if not distributed into a high flow area, can actually severely stress corals, and even damage tissue.

That’s where dosing pumps come in. They aren’t as complex and intimidating as calcium reactors, (where suddenly you’re dealing with CO2 and element mixing) but they offer a slow, steady and stable way to adjust water chemistry. Dosing pumps come in several varieties. Some are hobby grade pumps, which allow easy and relatively precise adjustment of how much element to dose, and when. Others are commercial grade pumps, which stand the test of time, but require either an analogue timer or controller to properly work. (At least where reef dosing is concerned)

Either option works, and personally, while I prefer the commercial grade pump with controller option, I recommend the hobby grade option, for those of us unfamiliar with dosing, preparing to take the first step.

The pump’s intake attaches to a reservoir (there are a bevvy of options out there) that is filled with the element that will be dosed. A second line enters the aquarium or sump. Pumps range is speed, (such as 1.1 ml p/ minute and up) and some allow you to adjust dosing speed on the fly. The trickiest part about dosing is the initial set-up. Slower pumps take their time getting liquid pulled up, and into the pump. It requires some patience, as you can’t calculate the amount of liquid being dosed, until liquid is exiting the output line. Some dosing systems allow you to set it and forget, programming precisely how much is to be dosed, while others require a controller, and a bit of math to get the dosing schedule right.

For example, I use my apex controller to run my dosing pumps. My pumps dose 1.1 ml p/minute, both calcium and alkalinity. I need 1.6 oz of each element to finish off my coral’s daily dose. This means the pumps have to run for 43 minutes to finish it off. When using a controller, you can break this up into as many short doses per day, as you like.

It guarantees that a major water chemistry change cannot happen, and automates a mundane, and easily forgotten husbandry task. Just make sure you double check the pumps and the controller are working correctly, because an overdose of elements can equal a major disaster.

If you’re venturing out on the path of two-part dosing, or have been dosing for a while, don’t let the giant robotic artery look of dosing pumps scare you away. They are an effective way of maintain stability, and as Yoda would say, “A healthy reef, a stable reef is.”