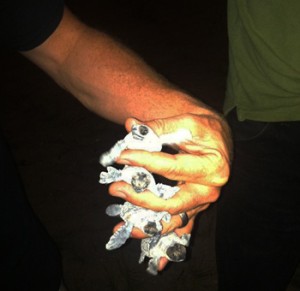 As many of you know, MACNA 2013 was held at the Westin Diplomat, which sits rather proudly on the beach: the same beach where hundreds of assorted turtles nest each year. In fact, Florida beaches host 5 different species of turtles, Loggerheads being the most common, but also Greens, Hawksbills, Kemp’s Ridley and Leatherbacks may also be found. Nesting of these magnificent creatures usually begins in May and can continue on till late October. Once laid and hidden by the female, the eggs incubate in the warm sands for two months until the babies are ready to hatch and climb through the sand until they near the surface. Once there they wait for the sand to cool indicating the sun has set and then begin their perilous scramble to the ocean. This is potentially one of the most vulnerable periods of their life.

The first danger they will ever encounter is artificial lights along populated coastal fronts. The hatchlings instinct is the travel towards the light, in an ideal world this would be the moon, however in busy areas this could be streetlights, home lights or any other form of artificial lighting. Since most manmade light is inshore, this inevitable leads the hatchlings to scramble inland as opposed to the waters edge. To combat this problem Florida instituted a policy of low intensity amber lighting that has to be deliberately screened from the sea front to prevent such a tragedy. While such policies seem very effective there are times when nature conspires against our little friends. On nights with a very small moon, the light pollution from urban areas can become too much of an attraction and the hatchlings are fooled into moving inland. Such was the situation on the night after MACNA closed. While walking home across the beach front Todd
Gardner (MACNA aquarist of the year) his wife Ashleigh Gardner, Laura Birenbaum,
Joe Yaiullio, Justin Credable and Randy, Annette and Zander Donowitz stumbled across an unmarked nest that had hatched that night and the babies were headed inland as opposed to the safety of the sea. Armed only with iPhone lights the would be rescuers managed to save several dozen hatchlings and take them to the waters edge. Ordinarily a nest, when found, is marked and members of the Turtle Rescue Foundation are on guard with red flashlights (to protect the turtles eyes) to help guide the young turtles on their way. If not for a chance stroll along the beach these guys would have been destined to a rather short and cruel life. Now they have a chance among the sea grass beds and may one day return to the same beach to repeat the process again.  How cool is that …. 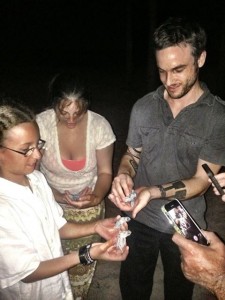 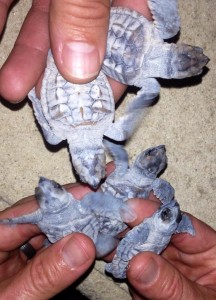