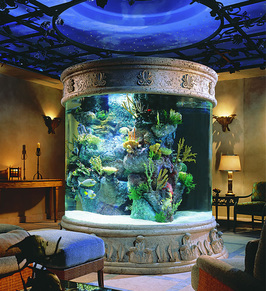 Recently a news report from the U.K. was circling around social media, detailing how a man sent his wife and son on vacation while he installed a massive aquarium in their home. Since the enormous tank would cripple their existing home, Martin Lakin had to demolish the house and build it around the fish tank. The price for the tank alone was 50,000 pounds, which equates to $ 77,372 US. The report went on to say that over 100,000 pounds ($154,000 US) worth of coral was added to the tank. When asked what his goals with the aquarium upgrade were, Lakin commented, “I wanted a tank large enough for my 15 year old son to swim in.” 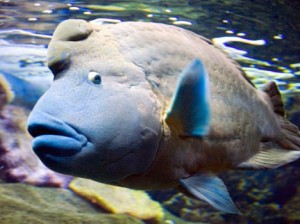 Obviously Lankin has some money, and he invested quite a lot of it into computer and control systems for the entire tank, including an automated sun-roof. While Lankin’s wife Kay resisted the idea of an even larger aquarium, a close friend of Martin’s revealed the current monster aquarium is just a temporary holding tank until he builds his ginormous dream tank. Often on reef blogs or magazines we see a massive tank posted, the envy of all aquarists. While these tanks are marvels of aquatic engineering one must ask, is it going too far?

I’ve seen the argument on aquarium forums that massive private aquariums pale in comparison to public aquariums. While this may be true, public aquariums are open to the public, and educational programs offered through these facilities help open people’s eyes to the wonders of oceanic ecosystems. They reach millions, and many public aquariums have active conservation programs which protect wild reefs. Those with massive private aquariums are doing so for their own personal enjoyment, and it’s arguable if they’re giving anything back to protect wild ecosystems. With reefs quickly disappearing and the live animal trade getting less than stellar feedback from conservation outlets, perhaps aquarists should take environmental responsibility into account when building monster systems, or deciding on what size tank to set up. 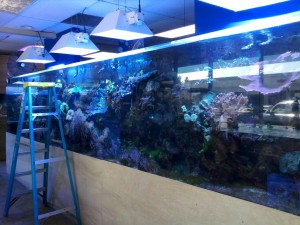 Massive private aquariums don’t just consume a lot of corals, fish and other marine wildlife. They take an abundant amount of electricity, manpower and equipment to build, move, and put in place. In the case of Lakin’s tank, his entire home needed to be totally re-built, wrapping around the huge aquarium. There’s simply no carbon free way to look at it; power tools require either electric, gas, or lithium. We often don’t realize that the lithium powering our smart phones, tools, etc is actually mined from the Earth, and presents an environmental crisis in and of itself.

It’s interesting that in both the U.S. and Europe regulations exist for the amount of pollution motor vehicles can release. Power plants, manufacturing, and other heavy polluters are regulated as well. Various programs have been proposed to cut carbon emissions, (cap and trade, carbon fines, etc). Yet one aquarium is allowed to release as much CO2 as three average sized family homes? It’s without a doubt that Martin Lakin and other monster tank owners have a beautiful captive aquatic ecosystem, yet their personal tank offers a heavy toll on the planet. Considering that much of the excess CO2 generated by human beings ends up in the ocean, collectively these tanks are poisoning the very reefs they are trying to showcase.

In an age where nearly all climatologists are united in accepting the reality of climate change, and also united in the belief that the phenomena is human caused, should there be a toll on heavy carbon dioxide generators? Is it really necessary for one person to have an aquarium that requires the resources of three homes to power? More importantly, if some sort of toll existed on carbon polluters would it force monster tank owners to re-consider their aquarium size, or perhaps invest heavily in carbon free power sources?

What about personal liberty? 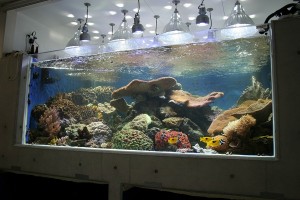 In the United States and parts of Europe, we often live by a “If you can afford it, do it” attitude. If someone wants to pay for 2,703 pounds of coal generated power monthly, then let them have it. This is an interesting take by a people already heavily governed by regulation. Most home owners associations and townships have property regulations that greatly exceed those permitted by state and local governments. All people must adhere to zoning regulations, and sensitive watersheds or public lands pack their own legally enforceable rules. Some home sites don’t allow wood burning fireplaces or charcoal grills. Having one item in your home that releases more CO2 than three families’ homes seems like it would raise a red flag.

Keeping the government out of it:

Regulation usually steps in when industries, people, or social groups fail to regulate themselves. When drunk driving was claiming thousands of lives, united citizens and various governments stepped up to pass stringent laws against it. When the trade in exotic animal parts and wildlife poaching were threatening entire species we got the Endangered Species Act, along with entire enforcement bodies to uphold it. When natural resources are in peril, often the Environmental Protection Agency (EPA) steps in and forces a management plan that conforms to federal standards. As the number of mega-tanks in the homes of the wealthy rises, it could cost all aquarists dearly in regulation. If suddenly the government felt that huge aquarium owners were greatly adding to environmental decline, regulation may be passed that applies to all of us. What if a typical home used more than 800 pounds of coal for power each month, the additional amount was heavily taxed and fined?

Marine aquariums are already in both government and conservation group’s crosshairs. Not only are wild animals being removed from their environment under sometimes shady circumstances, their captive habitats are burning lots of natural resources. If each and every aquarist acted with restraint and in an environmentally conscious manner, the fear of CO2 release regulation would likely be unfounded. At the end of the day, does a 15 year old kid really need a massive reef aquarium to go swimming in?