Monday Archives: His name is PITA

I may call him Peter to his face, but when I write it, I spell it PITA. Early last week he jumped into one of the overflows on my 120 tank, never a good thing but especially not so when a fish is 7” long and a solid three quarters of an inch thick!

He’s lived with me for a couple of years and has never shown a proclivity toward jumping, so I’m not entirely sure why he did it. My guess would be he was trying to catch a tiny fly in my office where my tanks are and heaven forbid he ever misses an opportunity to eat. As he won’t tell me, I have to surmise a couple of things; the first, that he didn’t notice the almost transparent mesh screen top and secondly, being a fish, he was clueless that there was no water outside of the tank…to be fair, why would he think otherwise?

I would not have thought he could knock the screen cover that high into the air, get past the gutter guard that seals off that little half inch gap between the top of the overflow and the screen cover, and actually land in the overflow and not behind the tank. I shudder to think about that…
Has he not read Manhattan Reefs, and does he not know that I am the biggest proponent of tank covers and that I have allowed myself to be videotaped (argh!) to teach others how to build these things so their fish are safer?

Here’s a pic of him, just so you know how big a fish we’re talking about…and why I so do not want to lose him… 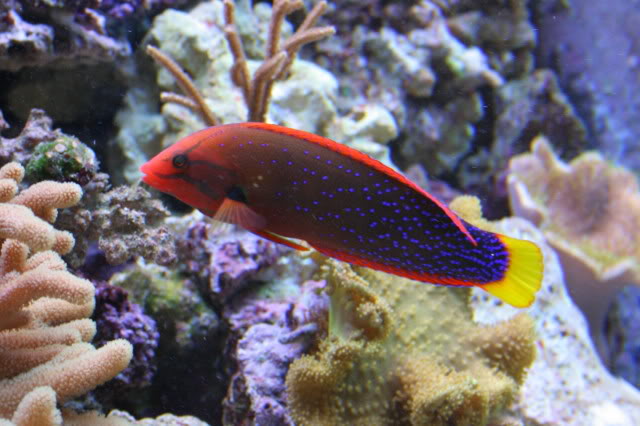 I needed a plan to get him out of the overflow as he is the type of wrasse that likes to bury in the sand bed at night, so he wasn’t going to last very long in there. I tried netting him but the Durso was in the way and I couldn’t pull it out as the overflow would have totally drained and I had no way to reach down 24” to the bottom of it to grab a squirming fish. Scare tactics didn’t work to make him jump back into the tank, so I just decided to feed him in there while I came up with Plan B. ‘Fishing’ for him was considered but I didn’t have the heart to put a hole in his face, so that was reduced to Plan Z.

After nearly squashing him umpteen times while blindly ‘fishing’ with a net in the overflow for the first few days I then decided that if he got in there, he could get himself out of there. Ok, I really had an very busy weekend planned and decided more extreme measures  would just have to wait.

I knew there wasn’t really a way for him to jump back into the tank with the screen cover on there and removing it wasn’t an option since there was a good chance if he jumped again, he would not necessarily land back in tank. Add to that, I do have other fish that are known jumpers such as my Blue Spotted Jawfish, and I certainly didn’t want to lose him too! I needed to find a way to safely give him jumping room that would MAKE him land back in the tank…if he chose to jump again…hmmmm…

…and this ugly thing was born… 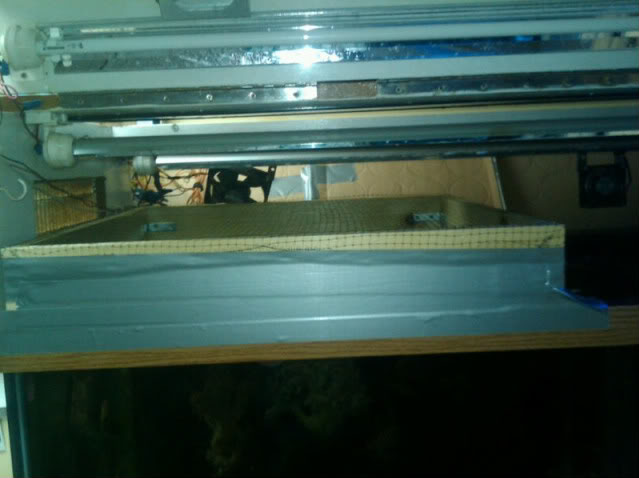 I dug out a 1 x 4, a handful of L-brackets a few screws and some mesh screen and in 10 minutes I had created an ‘extend-a-cover’ designed with the space needed for a crazy fish to safely jump and at worst land back in the overflow but chances were 70/30 that if he did jump, he might just land back in the tank!

Onto the tank it went… and …nothing happened, but it made me feel a little better when I went out on Saturday night.

Before I went out for the day on Sunday I added a twist to Plan B  — the twist was bait!
I concluded that if he’d jump to get a fly (food), then perhaps he would do it again. I was continuing to feed him, but being a Yellow tail Coris his genetics told him that he was to hunt for yummy morsels every second of every day, so I took a little flake food and put it on TOP of the extend-a-cover to tempt him.

The moment I came home Sunday night I went straight to the tank to check on him and feed him, but he wasn’t there! Now you know what this fish looks like, there is no mistaking seeing him, but I had to summons 2 members of my family to look into that overflow to validate my finding that he wasn’t in there.
He wasn’t in there, nor was he in the sump, or somehow stuck in the extend-a-cover, or behind the tank draped over the plumbing, nor on the floor. I looked in the sump again, nope, still not there. (Is any of this ringing a bell with anyone familiar with the tale of my once missing Mc Coskers Wrasse?)

So if he wasn’t anywhere I was looking, he had to be somewhere else. He wasn’t in his usual sleeping place buried against the front glass…no other sand looked disturbed and my heart was sinking fast…please let him be here in the morning…I whispered to the tank…please…

No snooze button for me that Monday morning, I charged downstairs straight to the tank full of hope. Check, recheck, nothing. Sigh. He had to have gotten into the Durso, there was no way he was getting through there to the sump, he’s too big, he must be caught in there already dead or dying. Again I whispered to my tank…please don’t let him be hurting…

At 10:32 the flash caught my eye. There he swam doing his usual back-flips, begging for his breakfast, as if the past week hadn’t happened at all.