How much technology is too much 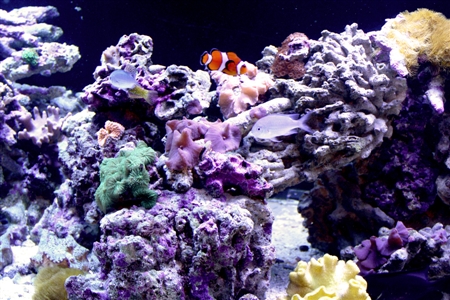 When I started my very first reef tank, it was a 40 gallon long, with a crappy Odysea PC light, a couple Maxijets and a Seaclone skimmer. Total cost of setup approximately $350-400.

That tank ran just fine. In fact, it ran well enough that I outgrew it within a year and bumped up to a 90. Now that I had the 90, my equipment list grew also. Out went the PC fixture for 500w of metal halides. The Seaclone (seaclown?) was ditched for a better skimmer (maybe an ASM, I don’t really remember) and my poor little Maxijets were supplanted by some tunze Streams. Total cost of the 90 was around $1000. And no, it didn’t grow my corals any faster or any differently than my old tank- I could just house more of them, and I could add some species that I was otherwise unable to keep.  The truth is, though, that while my Montiporas could now be on the bottom of the tank rather than right up at the surface, there wasn’t a magical awakening or anthing to accompany the bigger tank.   In fact, the larger the tank got, the more of a chore it became to maintain it.

Like most things it started innocently enough.  As my tank demanded more care I started looking for ways to automate certain tasks, and minimize others.  Suddenly I was neck-deep in programming an aquacontroller, and learning a million new ways to flood my apartment.  My not-flashy but effective gear was replaced by the German invasion of my tank.   Soon running this tank was a cross between computer programming and keeping the various reef-supply companies in business.  Think of a mix between the WOPR from WarGames and HAL mixed with a Lindsay Lohan-like love for various powdered substances.  My reefing budget suddenly looked like TARP and was about as effective.

Swept up in the upgrade movement, I lost all sense of reason.  The salt, (the friking salt!) that had served me well for years was no longer good enough for this monstrosity I had created.  Rather than just mixing salt, I now had a mad scientist labratory with bags, jugs, scoops, and beakers strewn about.   Plain old pellet food that had fed my fish and kept them fat since day one was thrown to the wayside, and replaced with a cornucopia of frozen gunk.   Luckily the gunk costs about 10 times as much as pellets.  This would have been a terrible decision if it wasn’t for the fact that it only lasted about half as long, and was a stinky mess to prepare.

Finally circumstances forced a re-evaluation of my reefing.  We had to move temporarily and I couldn’t leave the big tank running.  My critters were spread out to a tank I have at work and a sumpless 60 cube in our temporary apartment.   All of a sudden I wasn’t messing withthe- tank every day.  I didn’t have little freak out moments that maybe I hit the wrong button on the controller, or that I forgot to do something.   All of a sudden I am actually looking at my fish tank again, instead of obsessing about the equipment.

It might have taken years, but I think I have come full circle.  I wish you all the best, and hope your experiences with your tank have been as rewarding as mine.