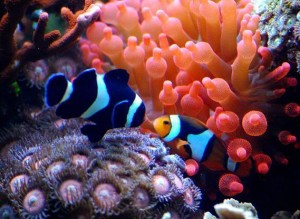 So, during my daliances in the scientific literature I came across a title of a new paper that I just had to read. This manuscript, published in BMC Evolutionary Biology, entitled, “Interspecific variation of calls in clownfish: degree of similarity in closely related species” opened my eyes to something that I am sure not very many hobbyists have thought of, that being fish actually calling to each other. I guess that they, like me, presume fish do not vocalize. Well, I was most assuredly wrong. The research published by Colleye et al. sheds light on this fascinating phenomenon.

In the manuscript it is detailed that clownfish are in fact quite prolific callers and do so aggressively to defend their territory and keep other clowns away. Using sonography and recording the morphological features of members of 14 different clown species, the reserachers showed that the characteristics of calling such as the frequency of the sound pulse, the pulse duration and the timing of the pulses closely correlate to fish size. In fact the correlation is so strong that it is actually possible to estimate the size of the fish making the call from the sound it is creating. Between the three acoustic criteria studied, only the pulse period differed to any extent between clown species. Thus, based on these facts, it would appear that calls are generated by clowns to keep other smaller clowns away from their territory, since only size, not species, can be inferred from the sound.

In an interesting twist, separate species of clown that frequently cohabit within a single anemone (as in the case of Amphipirion sandaracinos and A. chrysopterus or A. periderion and A. clarkii) have sufficient pulse period differences that each species is able to distinguish between calls, and thus determine the species of the caller as well as estimating the size. This greatly reduces apparent aggression within the territory between the two species since the calls of a larger clown of the opposite species can effectively ignored. The same cannot be said for other sympatric (living in close proximity) species which cannot distinguish between calls. From this, it can be conferred that the sound producing mechanism is highly conserved and its use to defend territory, and mates, has helped define individual species by preventing diversification through interbreeding.
Finally- from a purely personal viewpoint, over my years of fish keeping I have had several very large A. clarkii. Once in a while I would notice these guys snapping their jaws, making a cracking sound. At the time I thought they were just being odd… apparently not. This is exactly the type of behavior this article examines. Who would have thought my clowns were actually shouting!