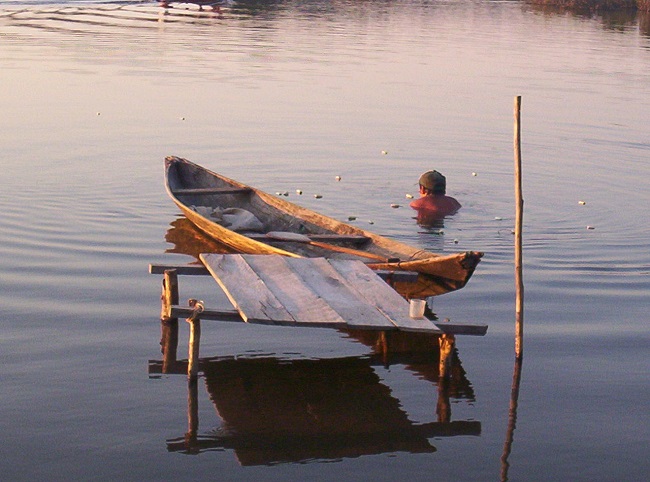 The dry season is near. The river waters are fast receding. Only small, stagnant ponds remain over what once was an extensive riverbed.  The dry season commences. Ponds become puddles.

Hundreds or thousands of small, colorful fish are hopelessly trapped in the shrinking muddy pools. However, by now, virtually every female amongst them has laid hundreds or thousands of viable eggs. On account of the immense accumulation of eggs, Nature has reserved a place in the future for the species. The outlook for these particular adults, on the other hand, is far less certain. For a relative few (approximately 40 million individuals), the slightest chance of salvation lies (somewhat ironically) in the hands of an ornamental fish collector.

Absolutely, these tiny fish (or, piabas) are far more than the river’s leftovers to those who eke out a meaningful living from the shady Amazonian rainforests working in Brazil’s ornamental fishery. Indeed, these fisherman (or, piabeiros) and their communities are growing more protective of their native habitats as they increasingly depend on the fisheries to support their way of life.
This did not escape the attention of Massachusetts-born “fish nerd” (and now-senior aquarist at Boston’s New England Aquarium) Scott Dowd. Initially horrified by the massive volume of animals being harvested from the region, Dowd eventually became inspired by the sustainable fishing practices of the native people and hopeful of what the aquarium industry could do to help preserve these pristine natural environments. Soon after the expedition, he helped to found an organization—Project Piaba—to promote these fisherman and their unique brand of environmental stewardship. Under the slogan “buy a fish, save a tree,” Project Piaba endorses the practices of the piabeiros as a model to be used in other major ornamental fisheries around the world.

More information about Project Piaba can be found in the April 2013 issue of Discover Magazine (“Fishing for Sustainability” by Sy Montgomery).