As technology advances, it makes a plethora of information (both good and bad) available online with just few clicks of our fingertips.

This is my story. I have made this video about GAC (granular activated carbon) over a year ago. In it, I went over the facts and misinformation out there and tried to set the record straight along the way. To do this properly, I reached out to Sean Berner and Jeff Turner of Boyd Enterprises, who explained everything in detail but in very simple terms.

Yes, you have already seen it already. Why am I bringing this up again? Well, I had someone comment on the video recently:
“DON’T USE CARBON AT ALL GUYS ! Activated carbon can also remove the trace elements and minerals that are important to your fish, invertebrates, and corals. A recent study has found that the heavy use of activated carbon in marine aquariums can cause Head & Lateral Line Erosion disease (most often seen on fish in the Surgeonfish Family). This can be avoided by using a trace element additive in the aquarium.”

Recent study? I was intrigued. I’m a big nerd when it comes to things like this so I hopped on my computer and started to research more into it. I couldn’t find any recent studies regarding GAC.

After my initial research, I replied:

“Can you send me a link to the recent studies? The only reputable study that was shown about this was from Jay Hemdel (Whom I greatly respect and that was in 2011 and even that had some anecdotal points.)

“The scientist that emailed him said for him it caused (theory)’…small sharp <carbon> dust particles would get into lateral line and bounce around because of the hair cells causing the erosions and subsequent fibrosis.’ So, not minerals or elements. Here is Jay’s original article on it, from 2010. https://www.tandfonline.com/doi/abs/10.1080/08997659.2011.608608 Not once it was mentioned why or point to specific mineral or element. So I would like to see what you meant by it. Many companies since then actively wash the carbon to reduce amount of fine dusts (chemiclean even comes wet out of the can) and tell the end users to do so as well. If you think it’s that bad, do you think reputable companies such as Polyps Labs, Boyd, and Julian Sprung’s Two little fishies (just to name few) would continue to sell them? What I would like to know besides finding out the recent study is what elements and minerals that you talking about. I would really like to see the science behind it (not he said she said nor your personal experiences) because previous independent studies I have been shown (via ICP) showed no signs and noticeable changes in minerals, elements, and ions. Another thing is adding what element avoids HLLE? Anecdotal findings around the world shows good water and good nutrition is just as bad culprit when it comes to HLLE. Personally, I run carbon 24/7 all day without any issues. I have 4 tangs in my aquarium currently without any ill effects and I often visit multimillion dollar facilities and public aquariums that utilizes carbon 24/7 without any ill effects in their systems. (I actually just visited Frost Museum less than 2 weeks ago and their curators can vouch on that) I look forward to your response.”

But that still had me thinking.

What if I am wrong? Am I not keeping an open mind about this?

So I posted on my Richard at Afishionado Page regarding it, asking for people’s opinions and in hopes of hearing industry professionals’ opinions and experiences, and actually hearing some science and not just anecdotal “he said and she saids”.

I was not disappointed.

These are a few responses that I wanted to share with you guys in case you don’t follow me on social media and missed this.

Matt Wandell (Biologist at Monterey Bay Aquarium):  When I worked with closed systems at CAS (California Academy of Science) we did many ICP-MS tests and DOC UV254 tests over many years on different systems with and without activated carbon. The conclusion I came to was that it didn’t affect trace elements at all. Iodine species tend to disappear in reef tanks whether you run GAC or skim, or not. Same with silica. Etc., etc. The most obvious thing that GAC accomplished was to remove a significant portion of detectable DOC from the water.

Jay’s study was great but to me it always demonstrated that GAC *dust* is one cause of HLLE, not GAC per se and certainly not the only causative factor.

Dr. Charlie Gregory (Veterinarian who specializes fish and corals and founder of Healthy Aquatics Marine Institute, non-profit organization that focuses on education and in coral conservation):

From what I understand, activated carbon (carbon molecules burned and chemically opened up to have reactive “sticky” ends) binds other organic molecules…that’s to say other carbon chains. These molecules can be proteins, sugars, or fats and can be compound groups of these. Most molecules, things like hand lotions and bug sprays and antibiotics, are made up of structures with a carbon backbone. Some molecules, such as hemoglobin, contain minerals, which as a unit may be bound and exported by activated carbon. When we dose a trace mineral supplement, very little of that should be pulled out by charcoal (or similarly by ionic charged resins such as chemipure) because there’s no reactive bond formed with the scavenging ends of the charcoal. Same goes for skimmers which pull out non-polar molecules such as fats/oils which are chemically different trace minerals. Trace minerals are generally ionic and polar and would separate from water. It’s like saying the skimmer is going to pull the salt out of salt water…As for the lateral line, why would pulling trace minerals cause lateral line? It is a disease of the sensory canals/pits perpetuated by bacteria but demonstrated by seaworld aquarists and veterinarians to follow koch’s postulate in respects to charcoal dust as an initial insult; they removed the charcoal, lateral lines got better, they put in back in, lateral lines worsened again. On top of being initiated by charcoal dust irritation, lateral line disease seems to be initiated by poor water chemistry, poor nutrition, and things like stress from fighting and constant light. It can be reversed in most cases by antibiotics (erythromycin has been 100% for me) but only after stopping the causative factor. If lateral line disease progresses to a certain point, ie. hippo tang in terrible water for 2 years, the scarring of the lateral line will not cosmetically heal from what I’ve seen. I’ve worked with veterinarians who tried debriding the scar tissue and then using expensive regenerative therapeutics such as neupogen, a drug used to regenerate cells after cancer treatments. Still didn’t work…

Many respected shop owners around the country also chimed in with their experiences and everyone seems to agree that the real cheap coconut carbon that puts out tons of dust is indeed one cause of HLLE. These are not found often these days, but by using high quality carbon as well as having the common sense to pre-wash the carbon eliminated the threat of HLLE caused by carbon dust as reported in Jay Hemdel’s report. 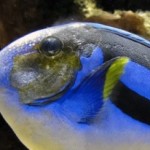 There is certainly no miracle cure for HLLE. No trace or mineral as this internet guru pointed out. However it is widely reported that good husbandry with good water quality and a good nutritious diet has been key to successfully reversing the effects of HLLE for many hobbyists and industry professionals.

This has been an extremely fun, learning experience for me and I hope that it was for you as well.
Keep asking questions, keep an open mind, and never stop learning.