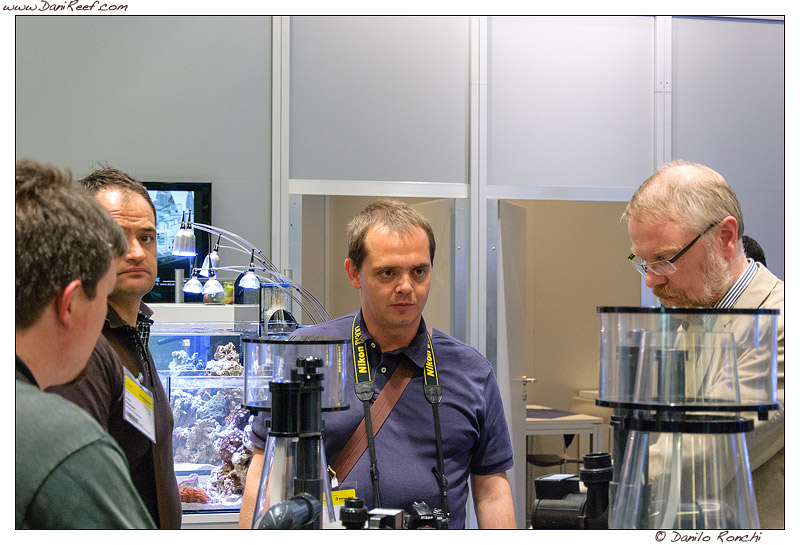 Interzoo, and always Hall n.4, there was another big giant of the aquarium world, which also played at home in Germany, Aqua Medic.

It’s been a pleasure to touch all the innovations presented, which were really interesting and at an high level. To me then there was also a dejavu, since my first skimmer, at the dawn of time, it was an Aqua Medic, the legendary Turboflotor 1000 multi sl, which was precisely the object of the first article I wrote about the world of aquarium, and that if you want you can read here: Deltec MCE600 vs Aquamedic Turboflotor 1000 multi sl (only in italian sorry), it was a project, among other things, so great that the skimmer is still in production today.

But let’s get back to the fair 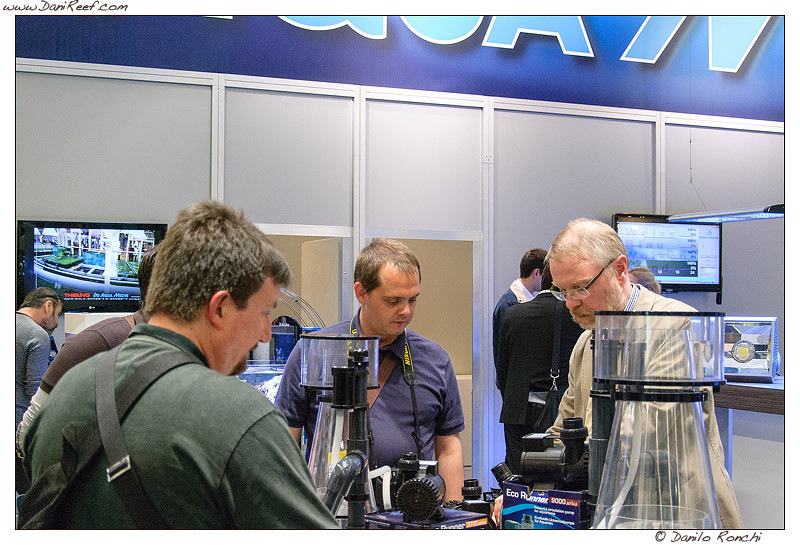 The first thing we saw were the two new skimmers of the line aCone, aCone 1.5 and 3.0, both with different treatment capacity but that seemed very interesting with the line that is very fashionable today, the cone body skimmer. In the old latine language the “a” before the substantive means “without”, so in an old language we have read “without cone”… funny 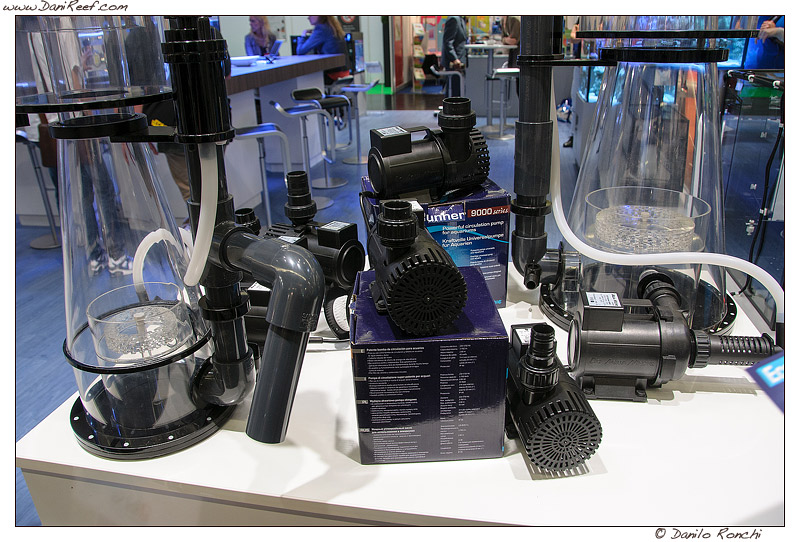 The model aCone 1.5 is recommended for tanks up to 1,500 liters while the model 3.0 for tanks up to 2,500 liters. Skimmers are monopump, the first employs the new pump ECO Runner 3700 with a consumption of 38 watts and with a treatment of 1,200 liters per hour of air. The skimmer needs to 35×32 cm space in the sump and is approximately 53 cm high. 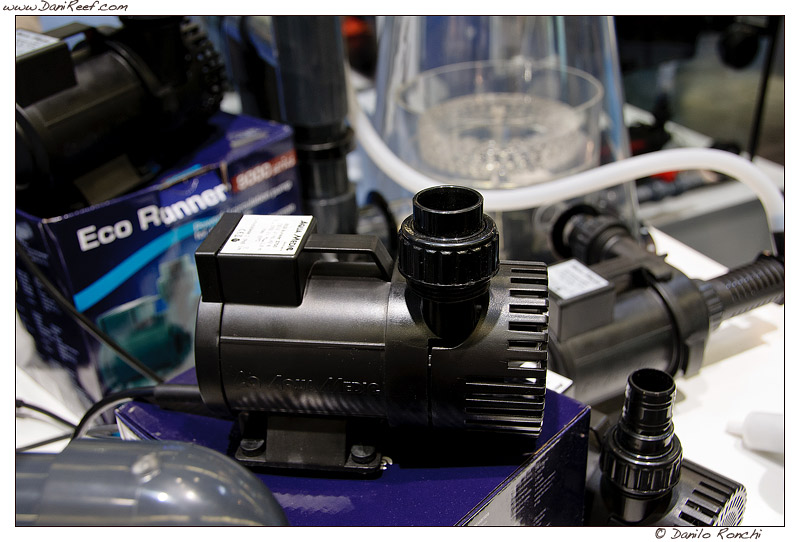 The aCone 3.0 instead employs the same new pump ECO Runner 6000 with a consumption of 54 watts and with a treatment of 2800 liters per hour of air. The skimmer occupies an area of ​​50×40 cm and is approximately 61 cm high. A beautiful little animal. 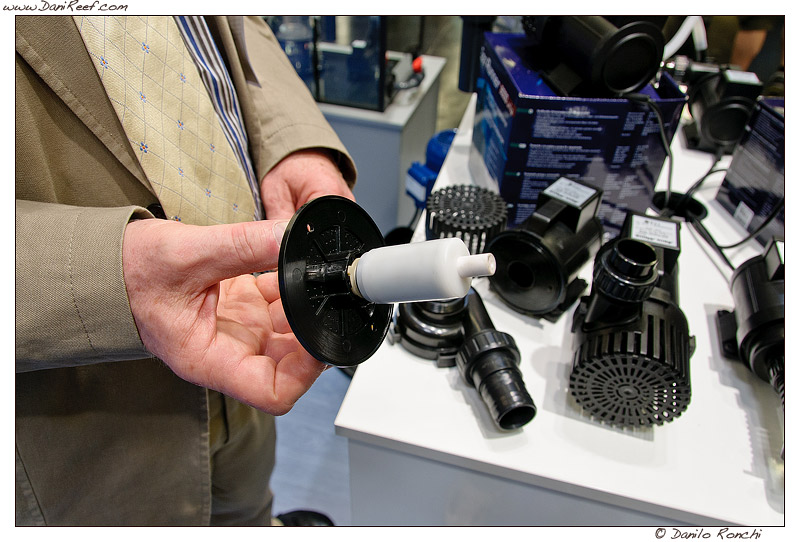 We can be impressed by the size of the rotor magnet. Look at the relative size compared to hand! 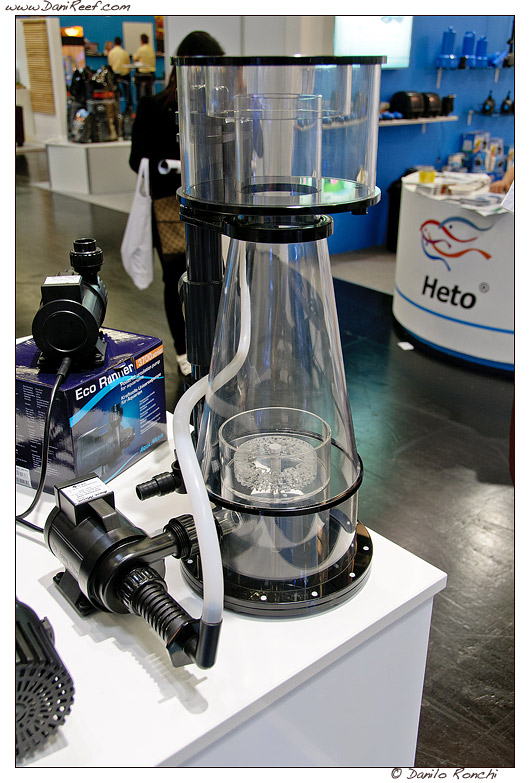 And here is the aCone 1.5 in all its beauty 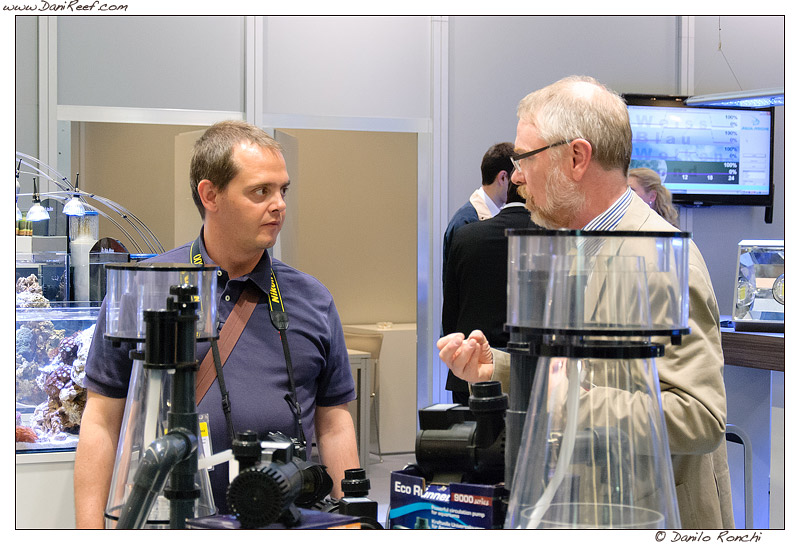 Now we look at another long-awaited new features, the new AquaSpaceLed 200 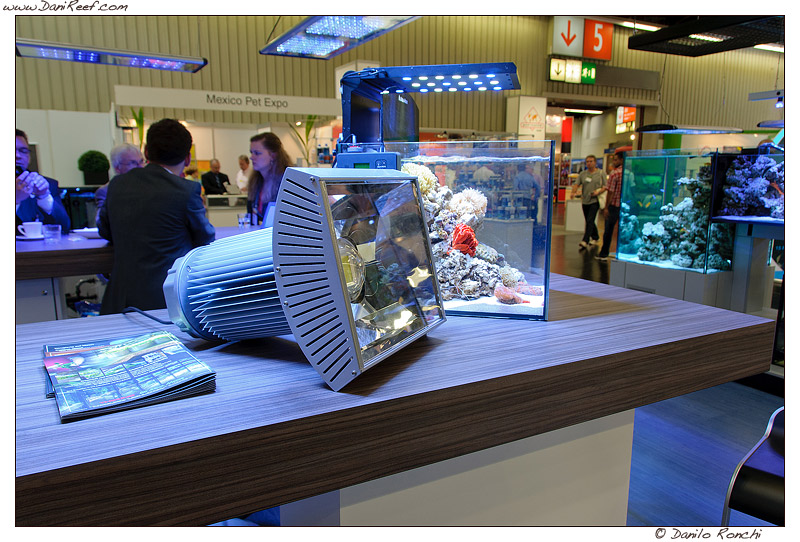 Interesting ceiling Led by the remarkable power of 200 watts, enough to be competitive with a 400 watt HQI, hearing the words of Aqua Medic staff. Of course as it costs about $ 1,000, we must make the math before buying. But do not miss the power … although, to be honest, is terribly cumbersome. 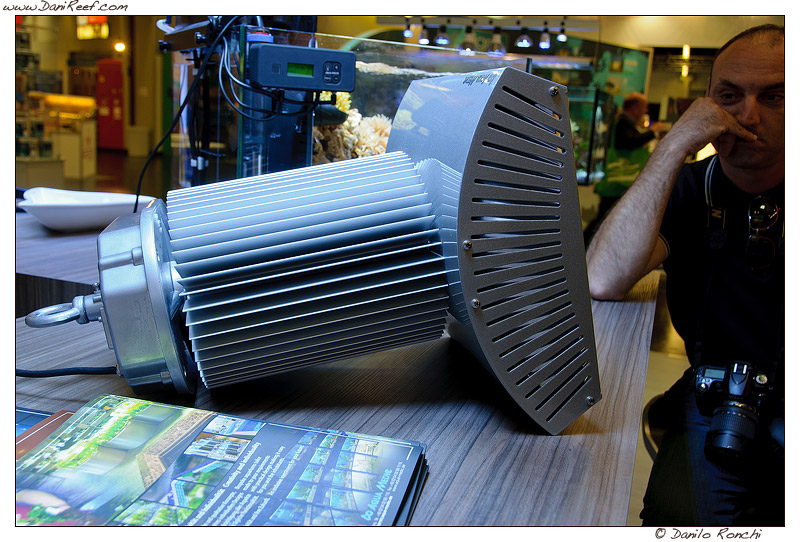 Probably, however, to have a power so highly concentrated and want to save on electricity costs and purchase of replacement lamps, may actually prove to be a good buy. In my case, for example, I could replace two 250 watt HQI lamps with two of these new AquaSpaceLed 200 and saving about 900 watts per day, not bad don’t you?, I would have much less heat and no need to change lamps. 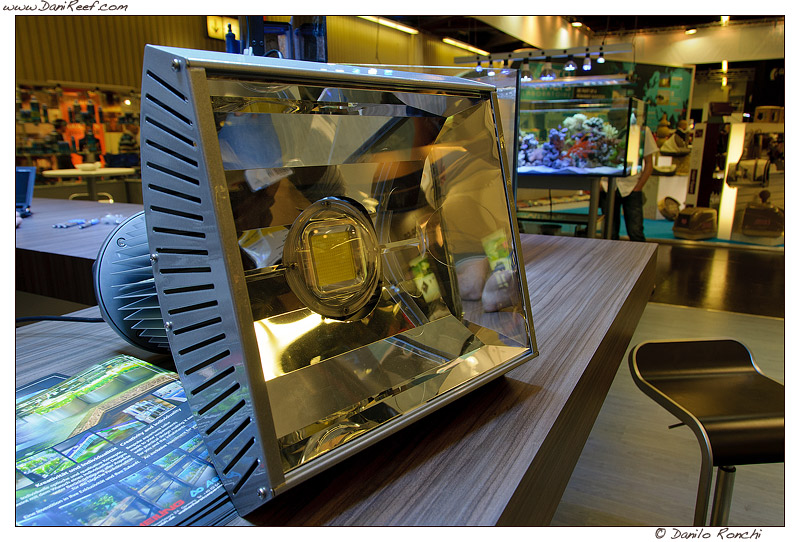 The reflector in each case seems to be that of a HQI lamp. 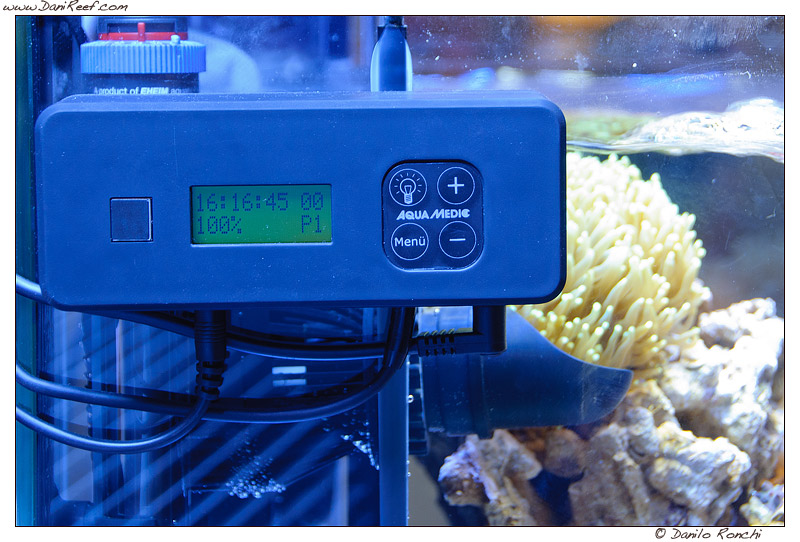 From large to small, with a small nano and a small LED fixture completely controlled by an external controller. 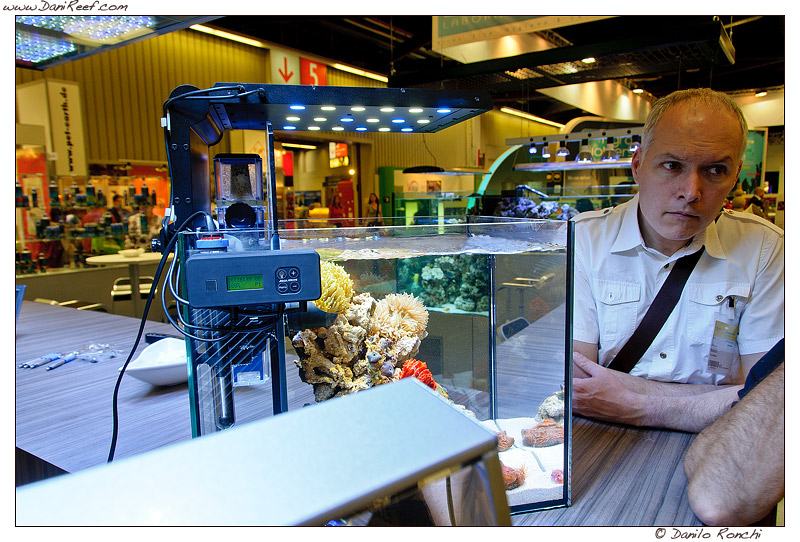 Then move on to new AquaSunLed, LED ceiling lights present in 100 and 150 watt version, also controllable by an external computer 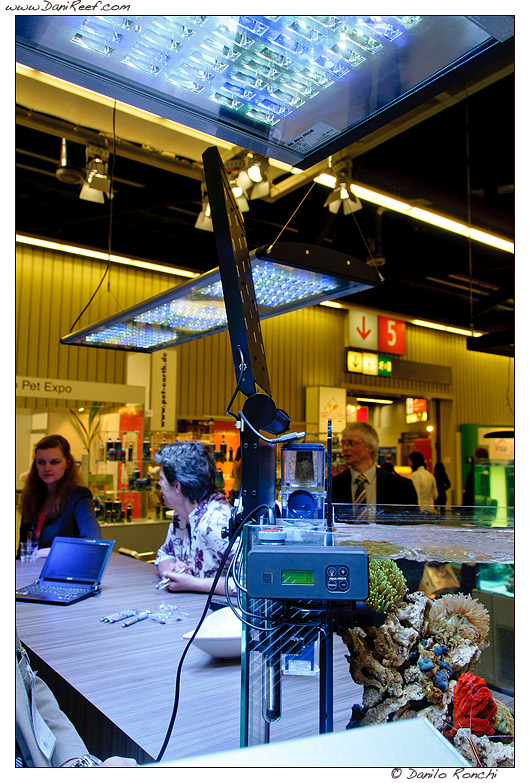 And we could not finish in a better way with a photograph of a beautiful marine tank with new aquasunled. The white balance of photography was choosen keeping in mind the content of the aquarium, so the exterior appears to be very yellow. 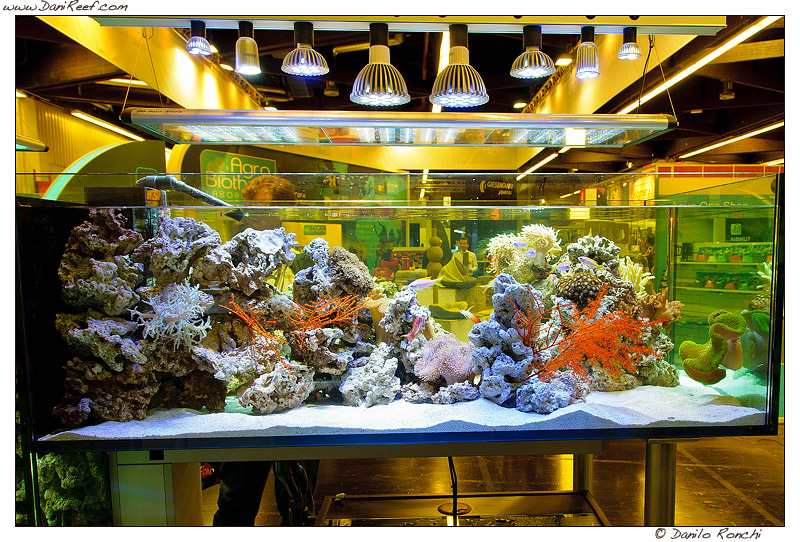 This is the other side of the aquarium. Really nice. 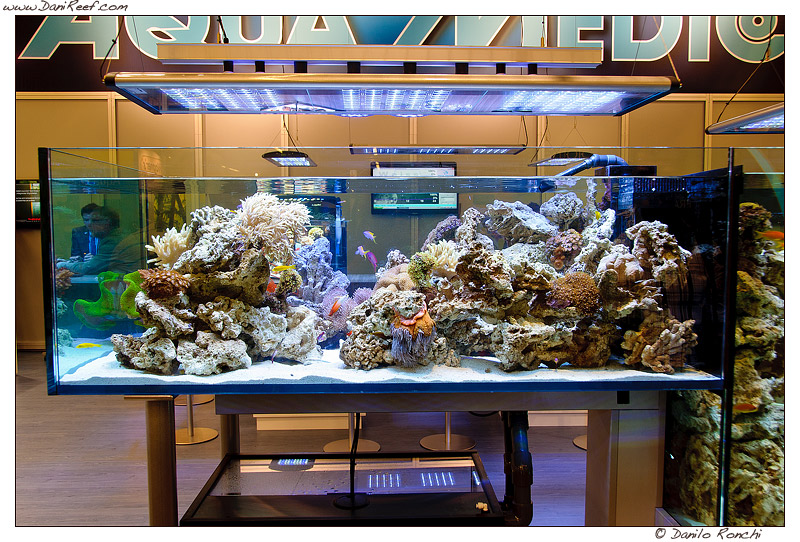