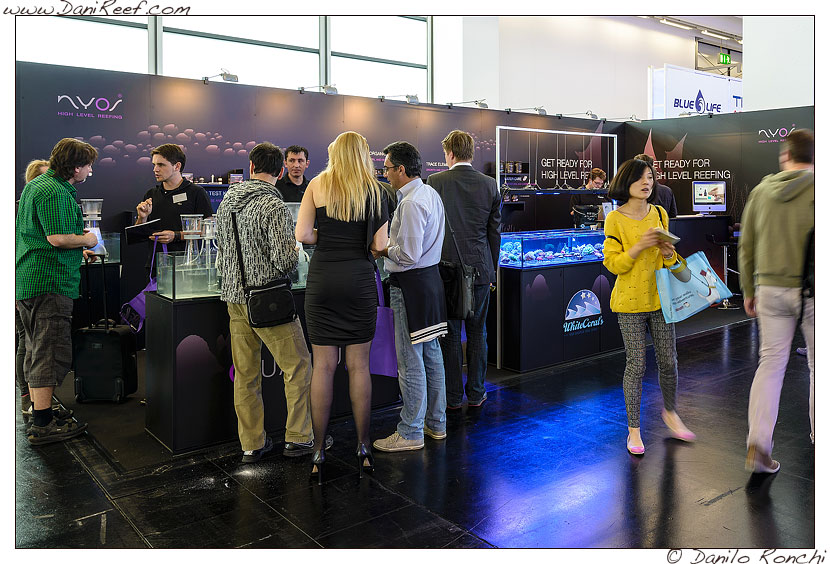 Two years ago Nyos shared their booth with Thrive Aquatics, but during this Interzoo they had a much bigger booth, which they shared with WhiteCorals, and has unveiled many other very interesting products.

We begin speaking about their new feed protocols, composed of PhytoMaxx, Artemis, GoldPods and Chromis. The first is high concentrated fitoplancton, but the other three are part of the new liquid zooplancton line.

I have to admit I like so much the new zooplancton line, so I wait to see it in the shop in Italy, to try it, and maybe to release an in-depth review. 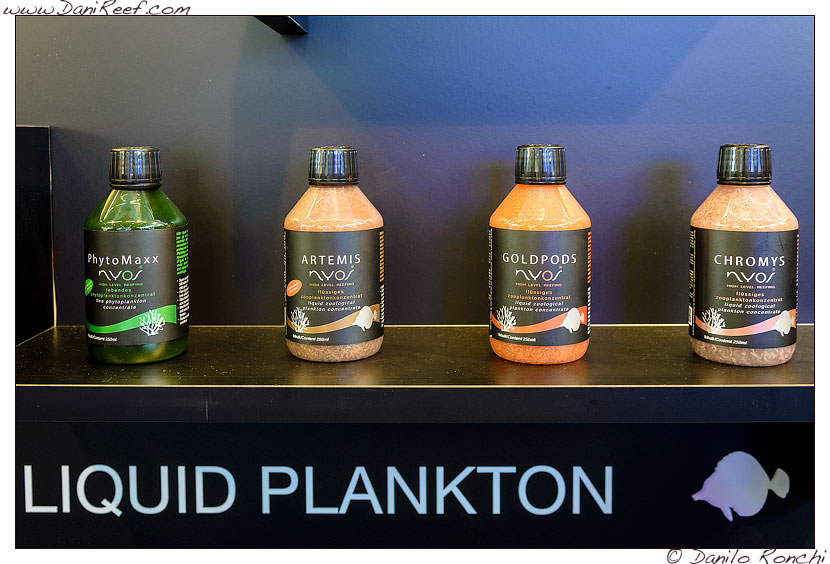 The Nyos feed protocol is composed also by powder and granular feed. 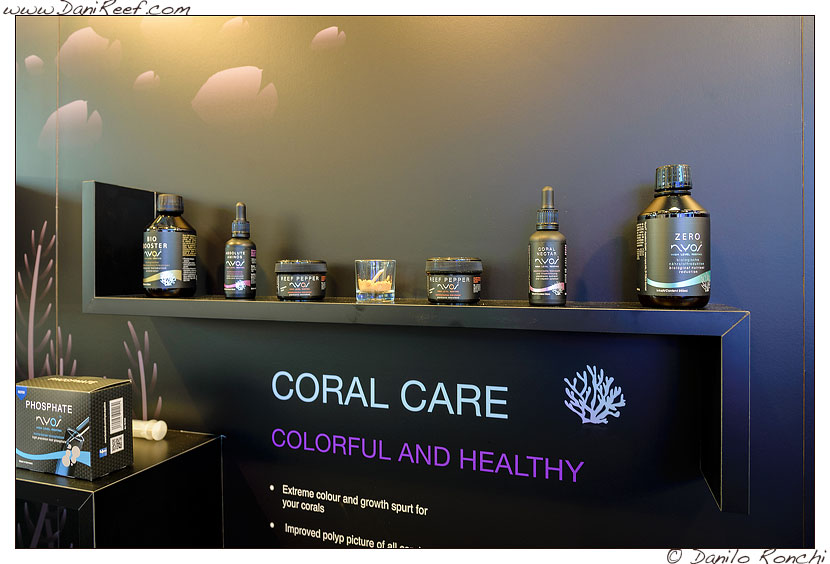 But not for this, it’s less interesting… for example, let’s take a look at the colours of this granular… and you can’t smell it… we definitively like it. 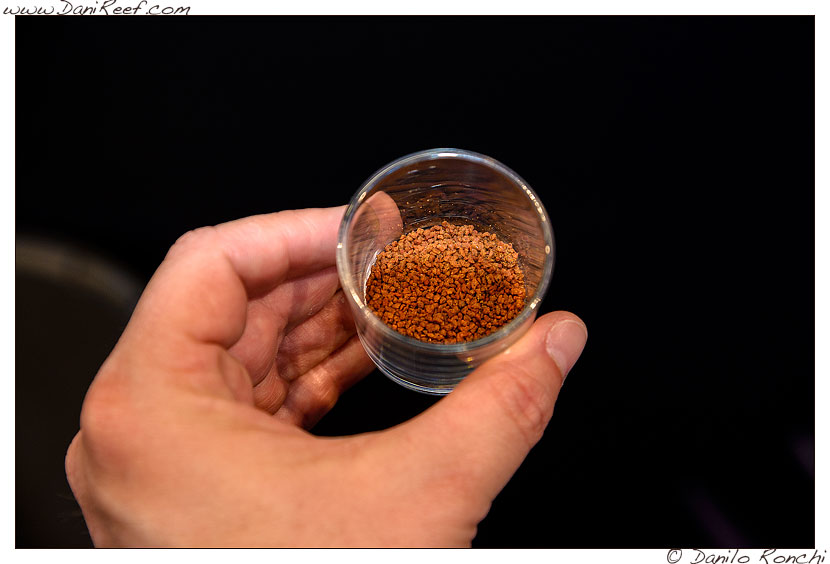 Then we pass to take a look at their test kit. 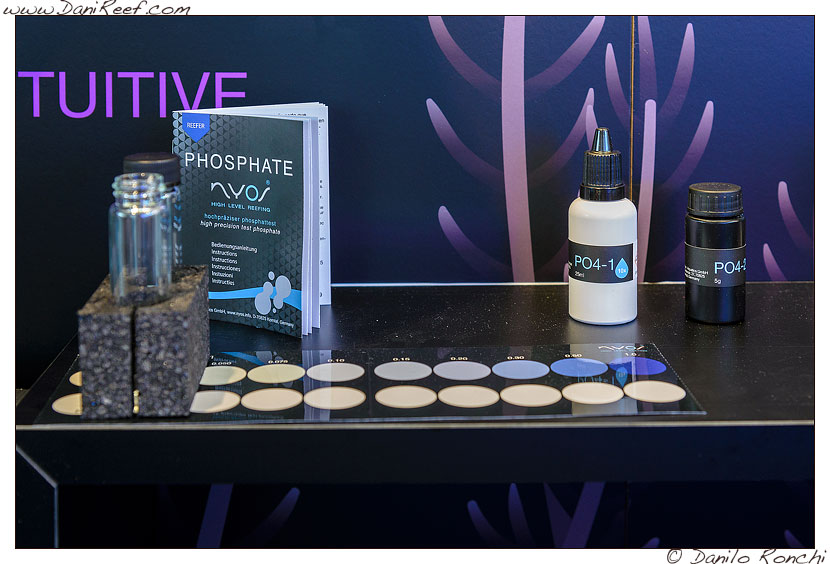 Here the phosphate thest kit, similar to OceanLife, Elos and Rowa, for example. 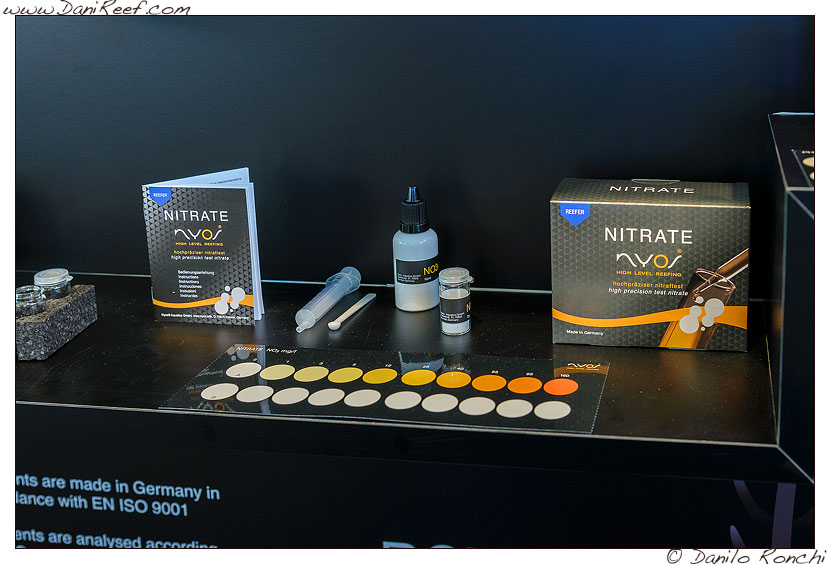 And here the nitrate test, very similar to phosphate one.

But what has captured our attention, during our visit to Nyos booth, was been the new skimmers line, the Quantum skimmers. 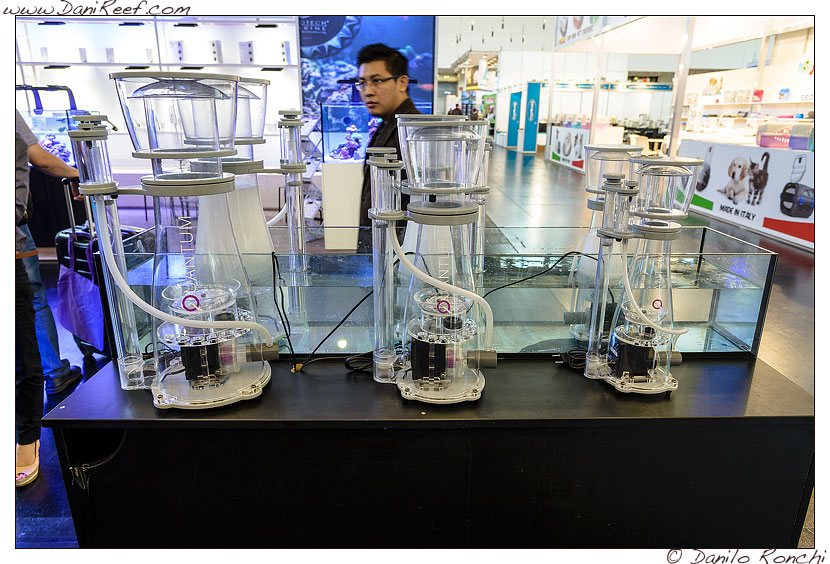 The first thing we have noticed it’s been their craftmanship and how absolutely wonderful they are. 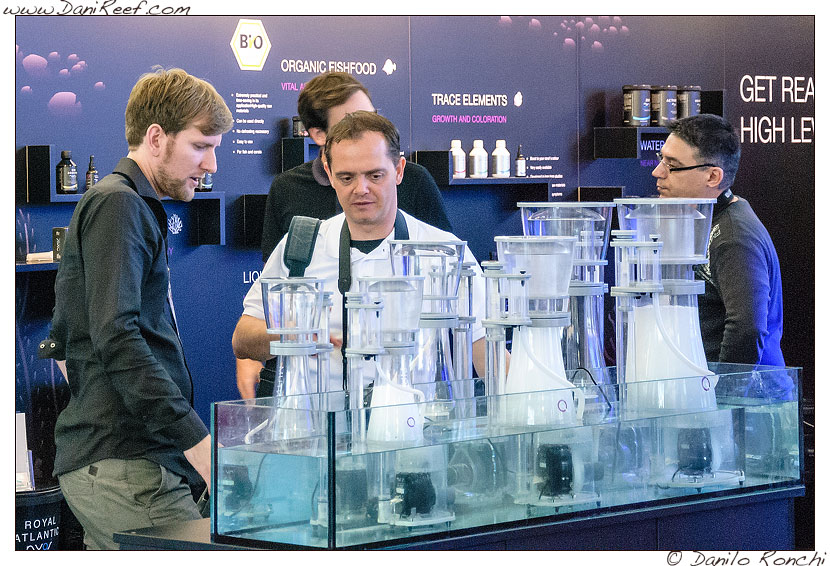 We think Nyos with his new Quantum line has presented a great product, and also very cool! We can’t say now if and how they will perform in aquarium, but the premises are very very interesting. 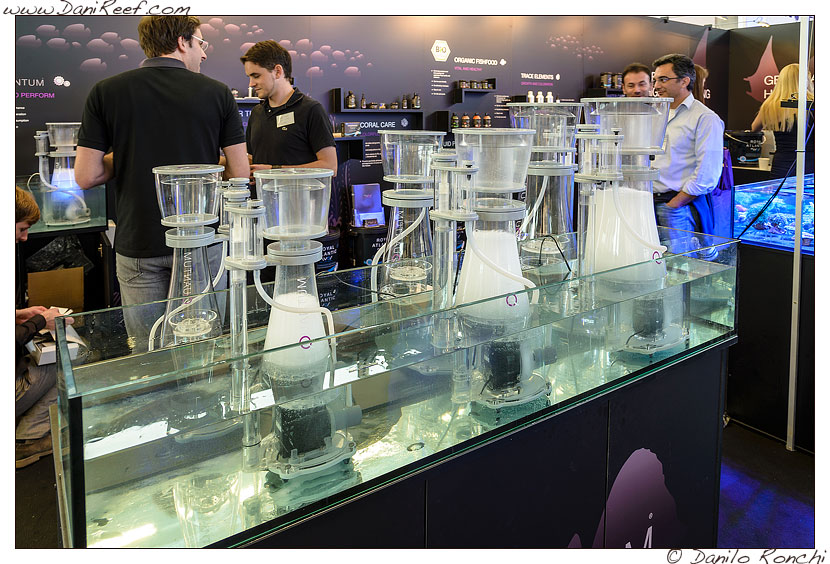 The skimmers are built with cone main chamber, like Korallen Zucht does, with acrylic everywhere. The high level of finish is impressive, and the pumps come from Eden but they have modified and have taken the name of Viper. 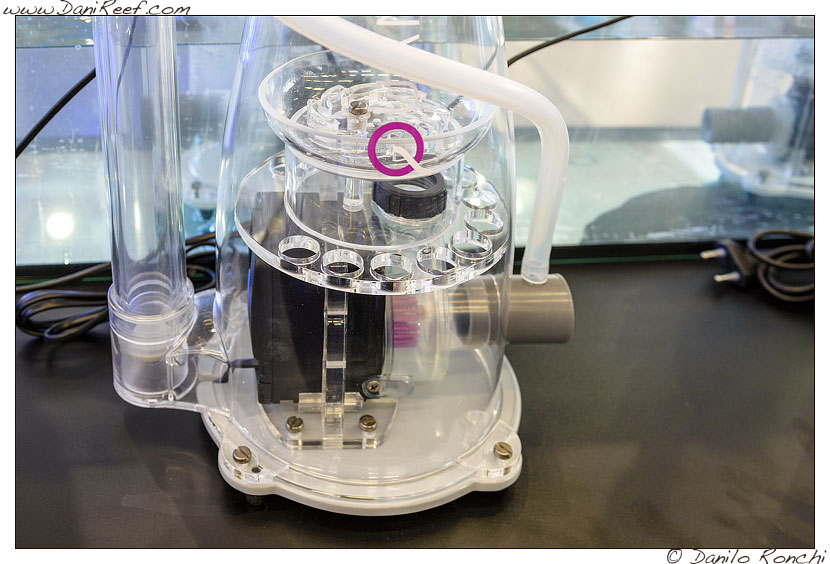 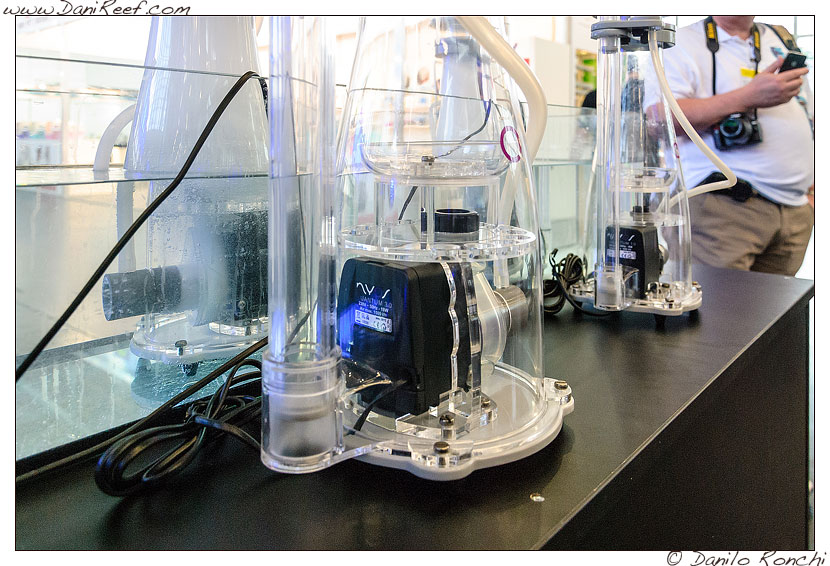 The screws are made by titanium to have not problem with salted water.

The particular construction of the circular diffuser is useful to impress a circular movement to bubbles, to increase contact time and thus the efficiency. The cap of the impeller is transparent to let us see how the skimmer works. It’s everything so cool. And, with this construction, it’s possible to see when there is something that obstructs the air inlet. 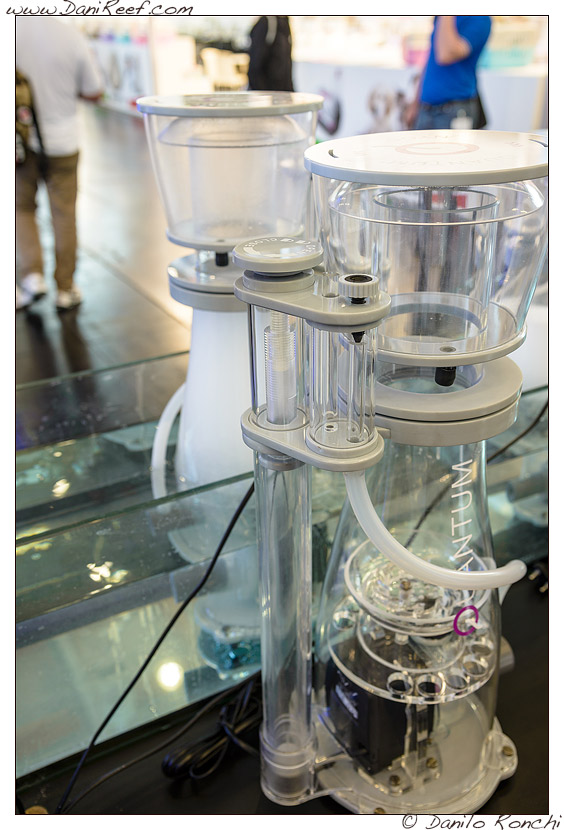 In the picture you can see the big knobs to regulate the air input. 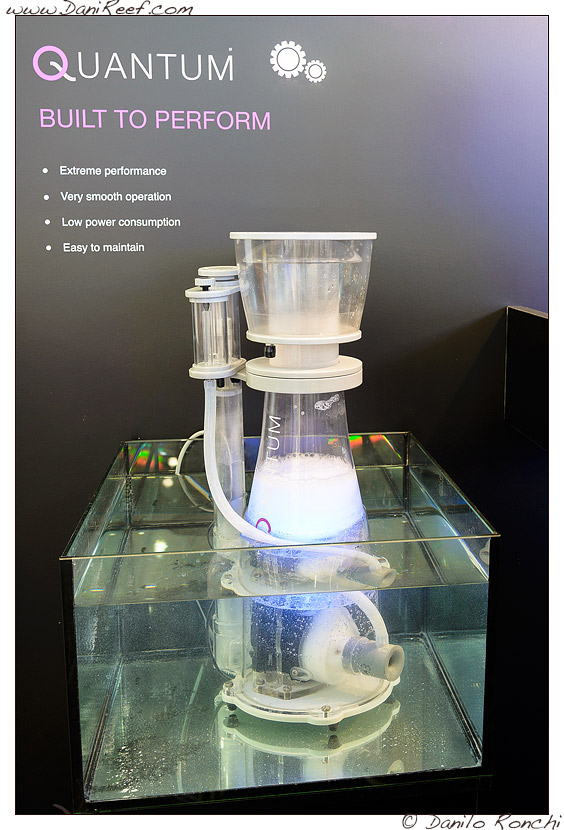 And last, there was him, the Quantum with the pump with variable power, and thus flow. It’s still in a prototipal version, but we can vary the flow with a simple remote control. 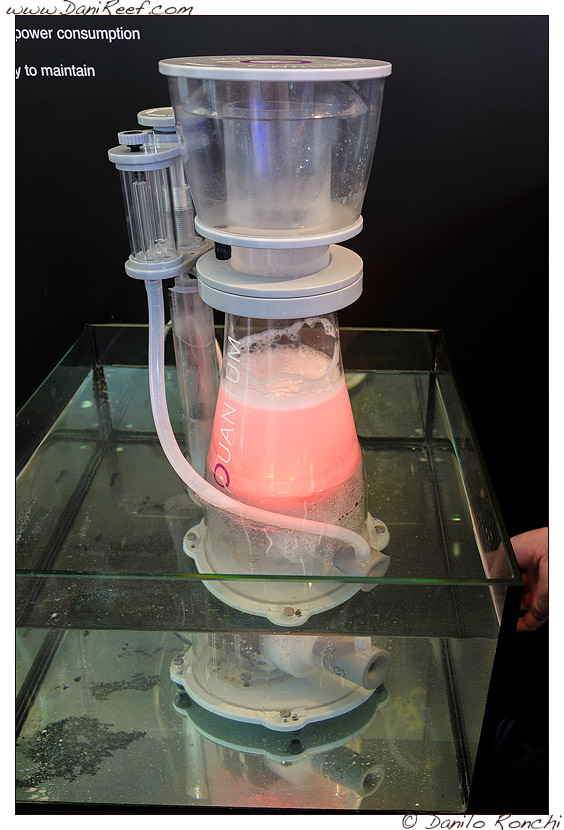 Depending of the power setting, with less or more flow, a multicolor led can light up your skimmer, how you can see in the pictures. And there is also a circuit that turns off the skimmer if there is no air to suck inside the pump, maybe for a problem or for a momentary blockage. When this happens, the pump turns off, and it will try to turn on in the following minutes to see if something is changed. 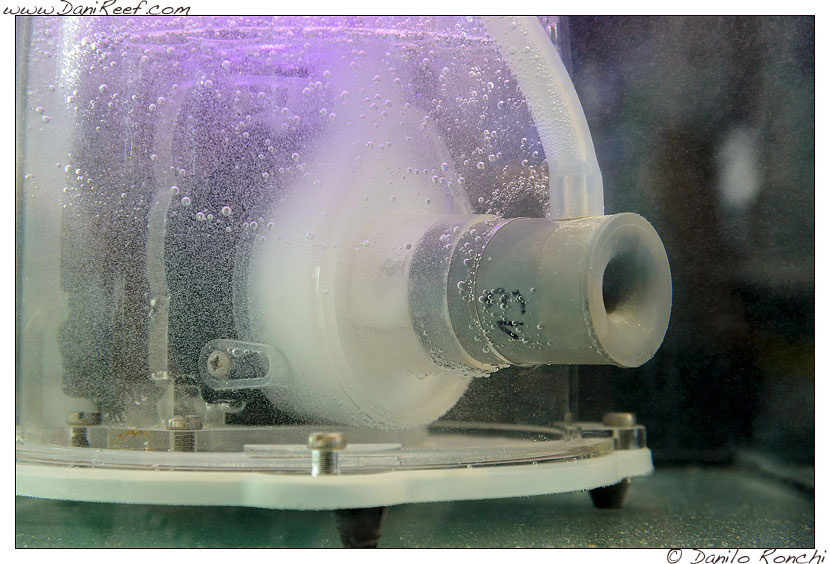 Here we can see how it works the pump, and the turbulence between air and water.

To let you know better these new skimmer, take a look at the official video about Quantum skimmers