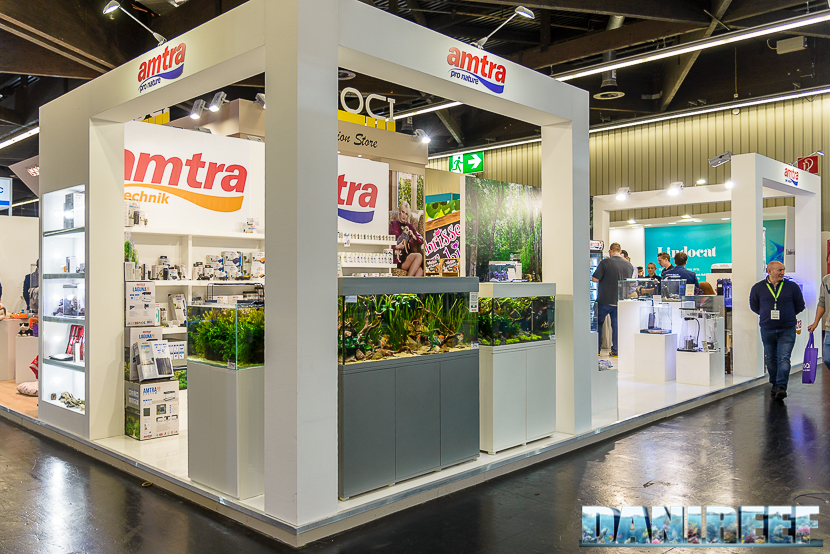 Amtra presented itself at Interzoo 2018 with a renovated catalog, ready to face the market with a lot of news, and it all hit the bull’s eye. So much so that we don’t know where to start.

For those who don’t know Amtra, it’s part of a much larger comapny, Croci; it is the aquaristic segment. Since last year, Amtra has relied on Davide Robustelli, who is revolutionizing the aquarium branch, and the results we’ve been able to observe throughout this year reached their peak at Interzoo.

As usual I like to start the reporting with a bit of color. Just as we stepped in to the booth, they offered us some Chinese Tea… Or, better, we could choose between different essences. All of them where very good. And that’s how I like being in a booth. Manners that strike and welcome you: a big difference compared to what we’ve seen in other pavilions.

I have always recommended the purchase of a UPS for aquariums, in order to be prepared for the eventual absence of electric power. But I have also said that, while the UPS is a good choice, an aerator is an even better one. But it has always been problematic, realizing a battery that activates automatically when there is a lack of electric current. 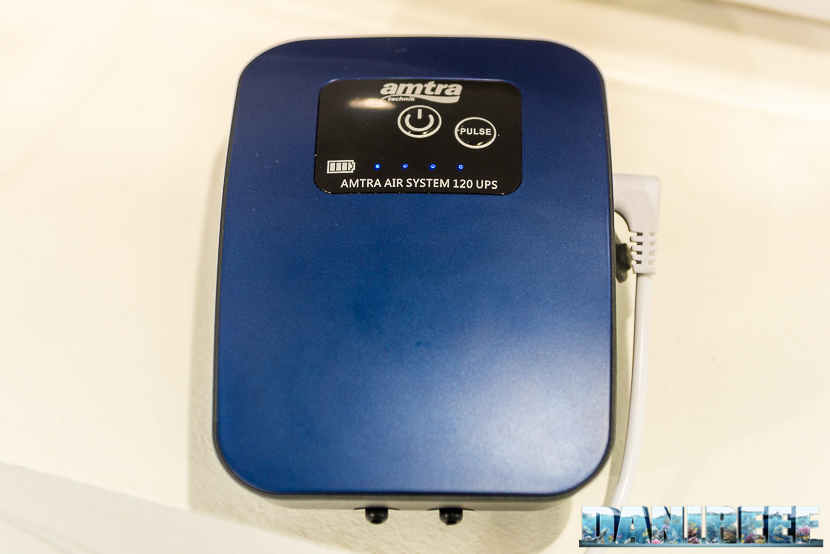 Today, Amtra proudly presents us with exactly this kind of aerator. It’s a battery aerator that, depending on the model, can last for over 20 hours. There are three kind of models to meet the needs of every aquarist. 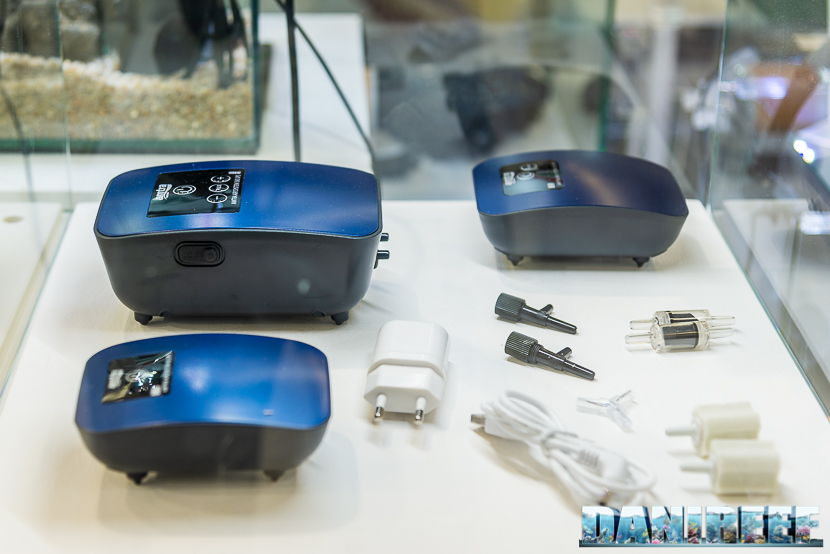 The aerator can work as usual, that is staying on, or it can work in standby. In this modality the aerator will be switched off and it will turn on only when the electric power goes down, working until it comes back again, or until the end of the battery.

There are three models available: 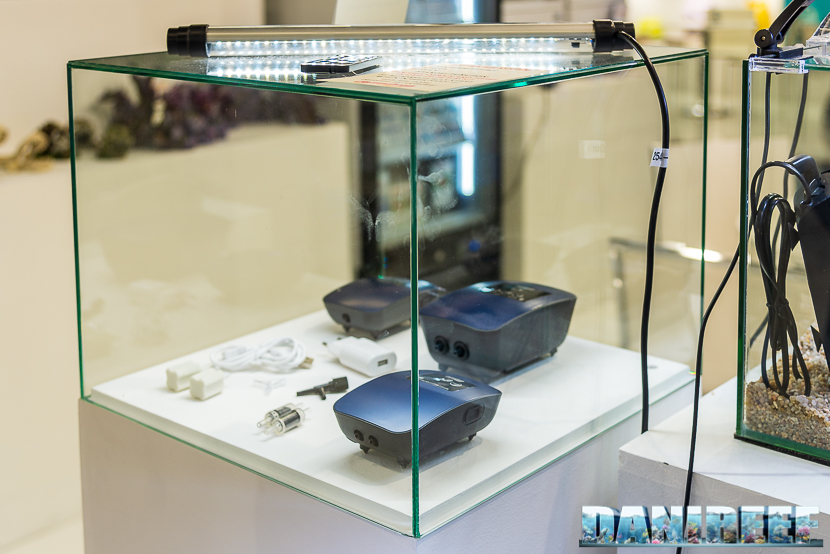 Each model is complete with all the accessories required to work. Amtra tell us that soon, we will have our own model to test. So if you are interested continue to follow our pages.

This refractometer can work in the dark 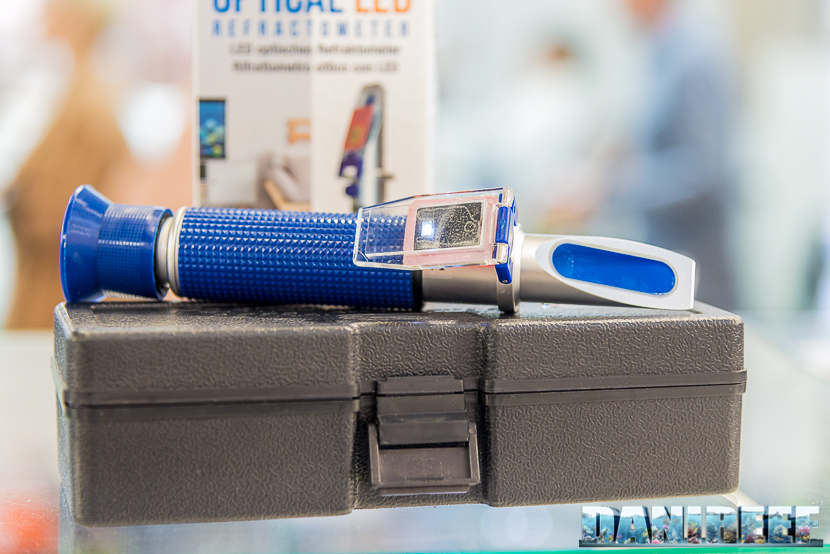 This is another product that has been missing among aquarium accessories: the LED optical refractometer. Practically, as we already know, a refractometer has to be oriented towards a source of light in order to work. The new refractometer incorporates an LED, which allows use in every lighting condition. Useful especially at night. 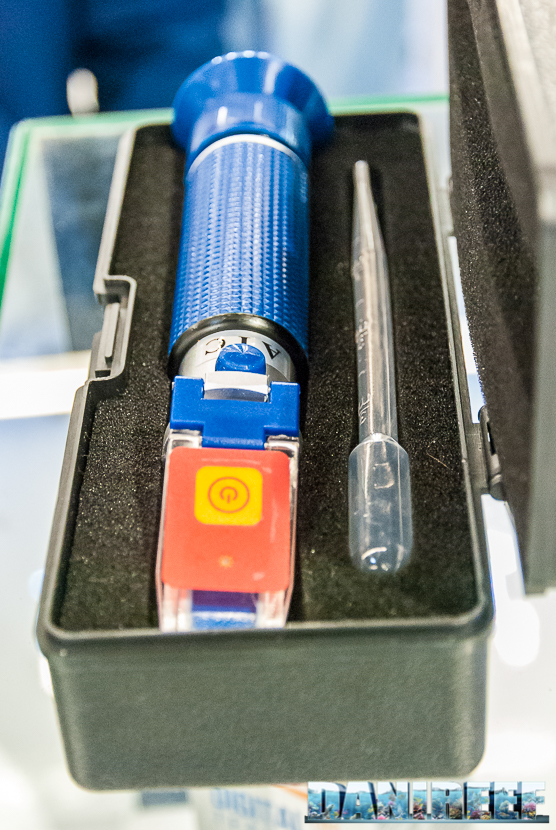 The refractometer is obviously ATC, that is, with automatic temperature compensation.

Amtra, thanks to the help of Giacomo Guarraci of ITAU, had many aquariums on display in its booth. 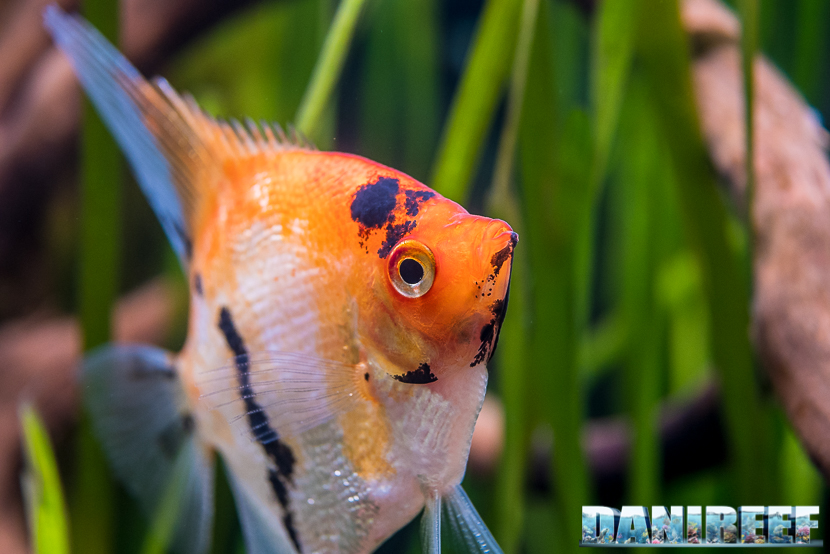 One of these contained the beautiful angelfish that you can see in these pictures. 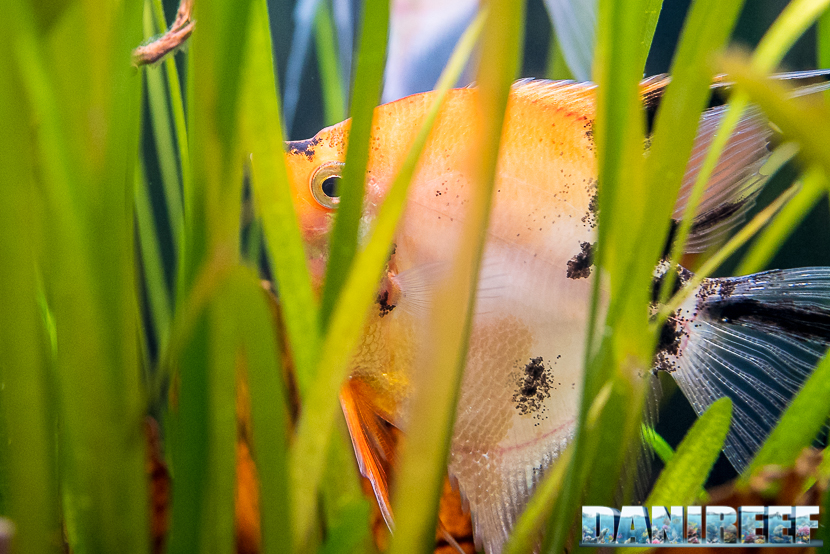 And we believe that there’s nothing better that showing your own aquariums all set up in order to make others see what it’s possible to obtain with your own devices. 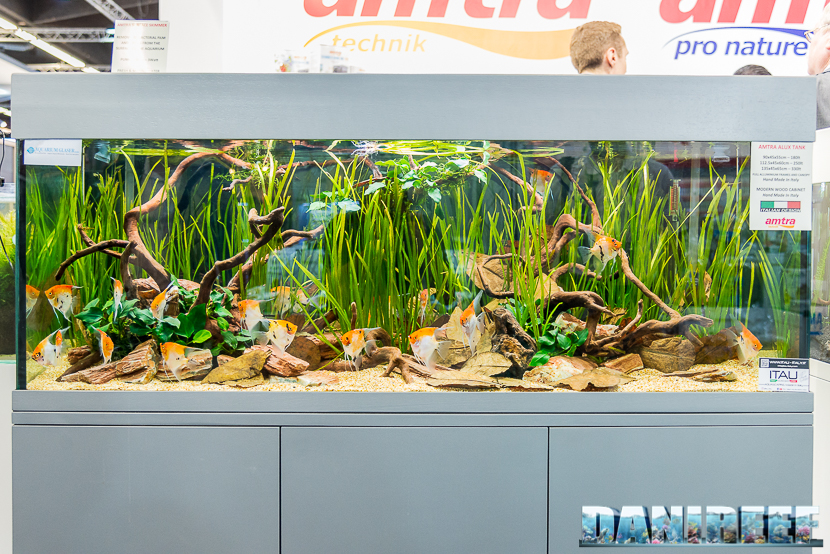 Pictured above is a simple aquarium, elegantly designed. It’s decorated with water plants and beautiful angelfishes and it catches the eye with its simplicity. 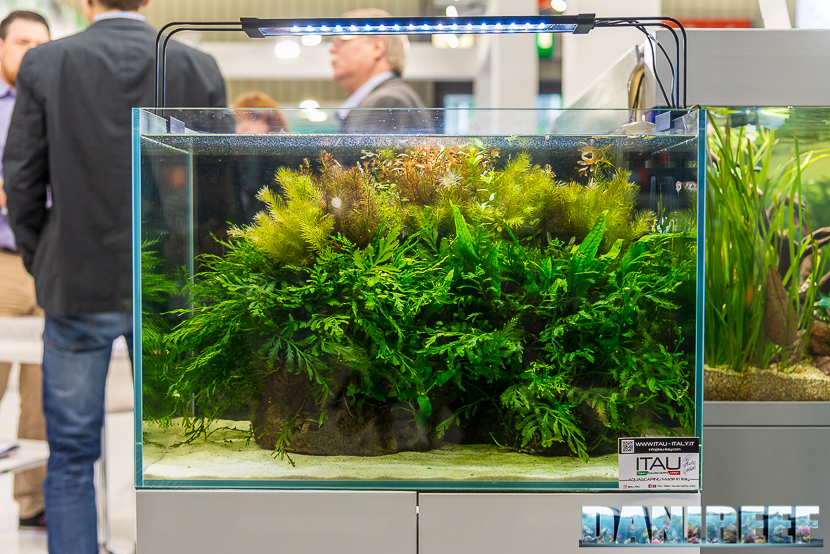 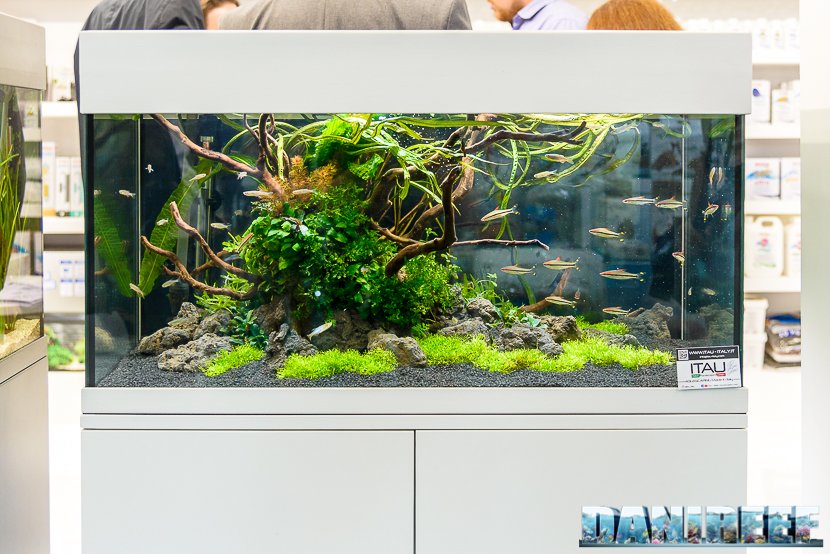 And here’s another one, more interesting, asymmetrically set up, with a lot of free space for the fish to swim in. 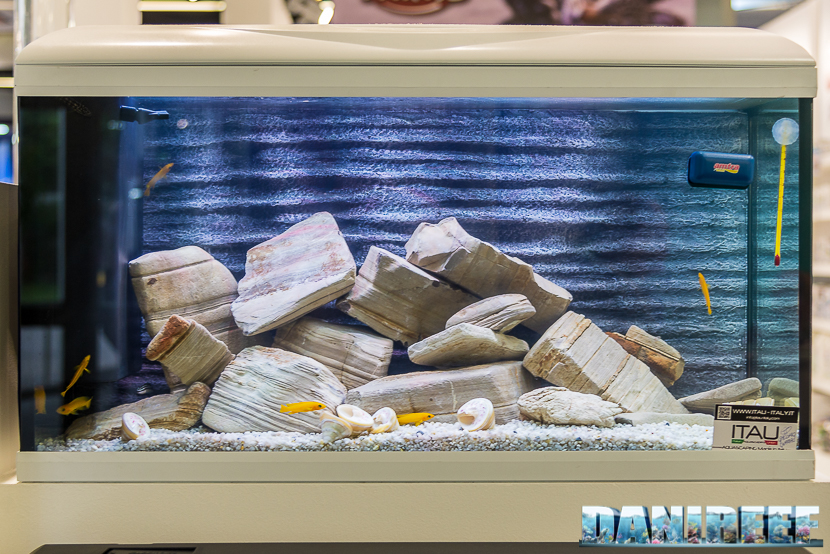 This set up is simple but has a lot of punch, and also it makes the aquarium’s background stand out. 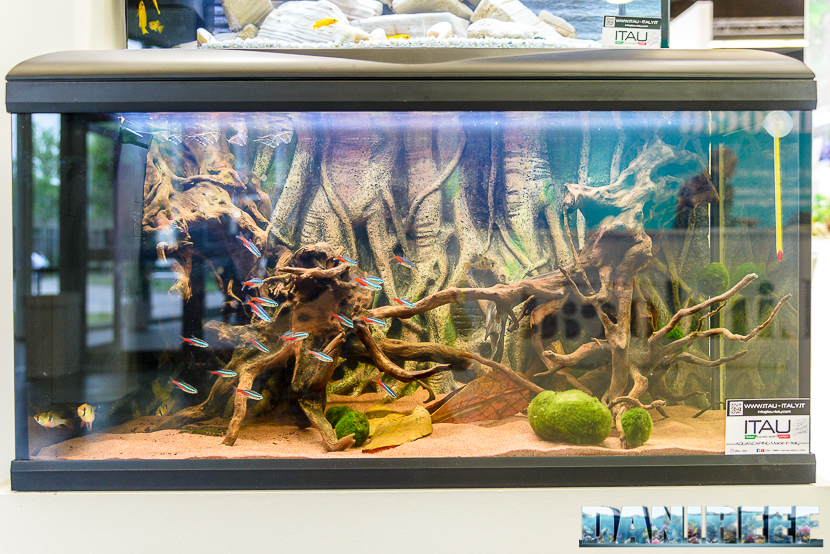 Another simple set up, that, enriched by the scenery, shows us a captivating aquarium in its linearity. It is an aquarium that is easy to manage, but is still quite interesting.

Also fresh on the market are the new pH and TDS indicators, in a pen shape for a more practical use in aquariums. 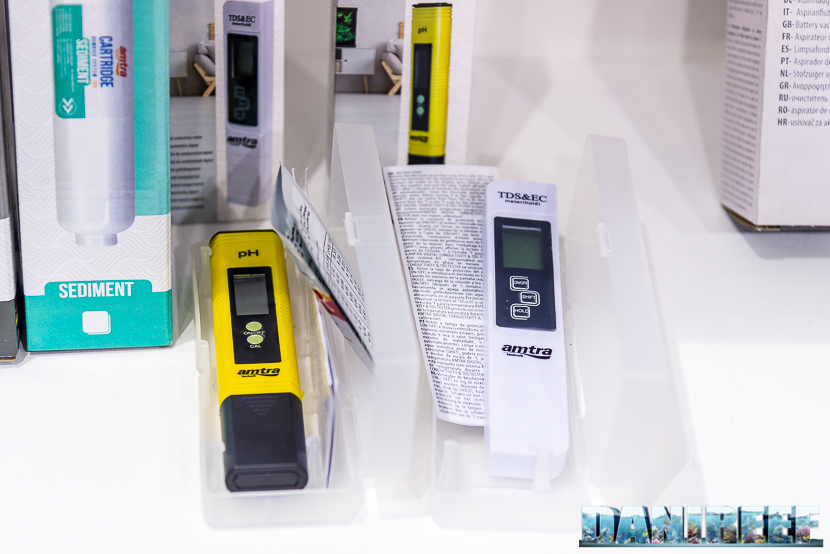 I didn’t even know that Amtra was distributing osmosis systems. They’re simple cartridge systems, that every aquarist should incorporate into their own systems – aquariums contain water, and if the water isn’t good, it will have many problems that in a short time would become unmanageable. 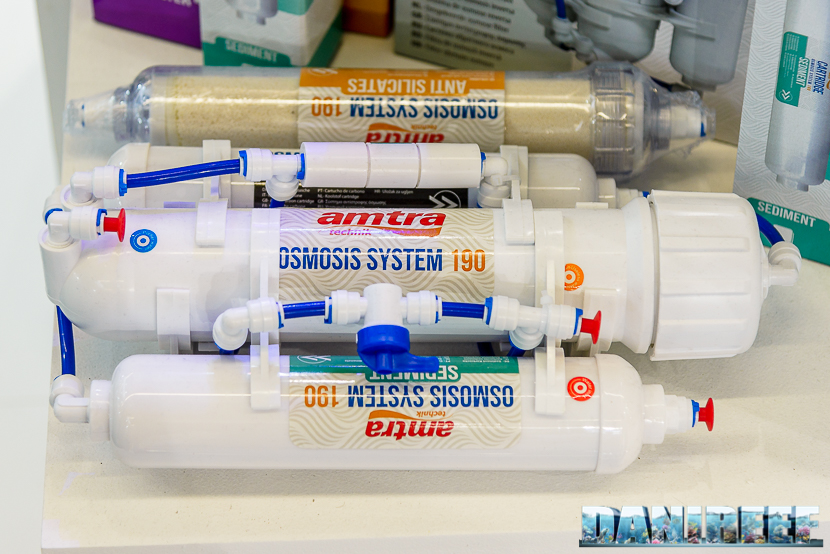 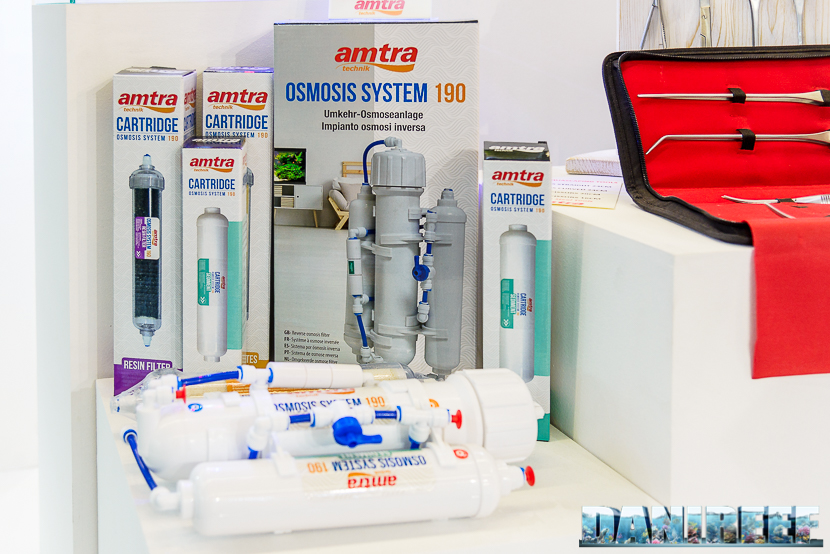 AMTRA and the Aquascaping

We met Davide during the explosion of the aquascaping phenomena, and some of the accessories that we saw in the booth remind us of his first love. 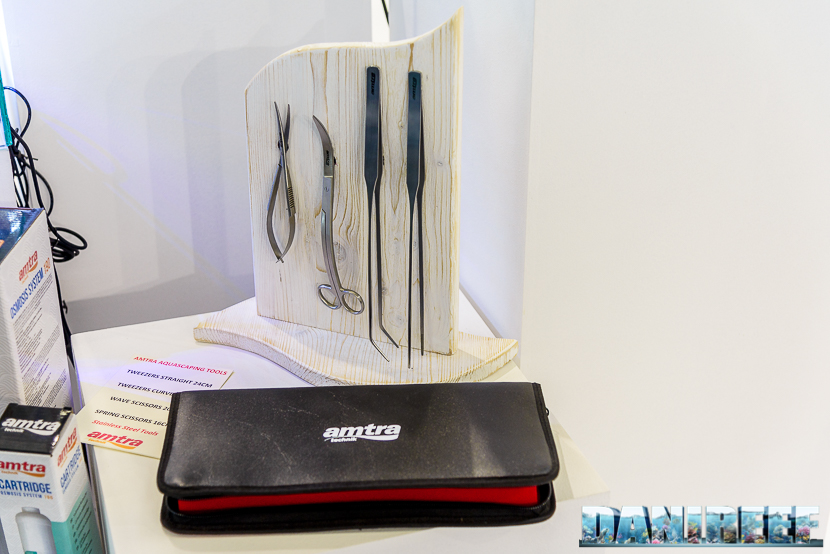 The set of tools with the travel box is beautiful. From my point of view as a marine aquarist, I don’t know how these tools can be useful, but they look very good. 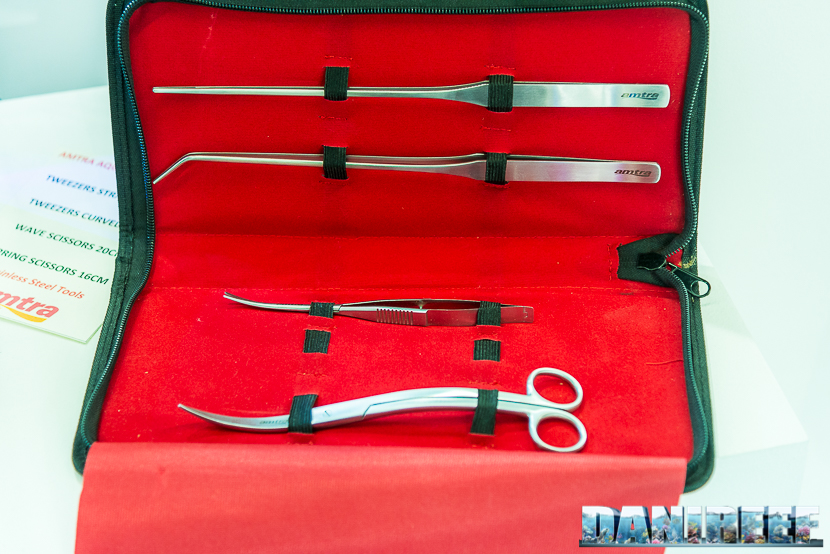 There were three different types of skimmers in the booth. The first one, in the following picture, is a hang-on skimmer. 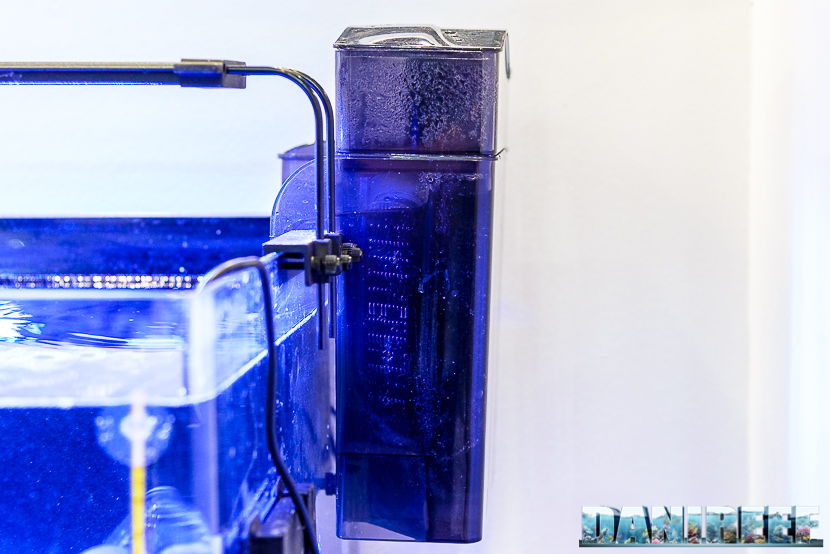 The second, and more important, was a surface skimmer perfect for the removal of that oily patina that forms so easily in many aquariums, especially where there’s little movement.

It is very interesting because it is one of the few skimmers on the market for small aquariums. 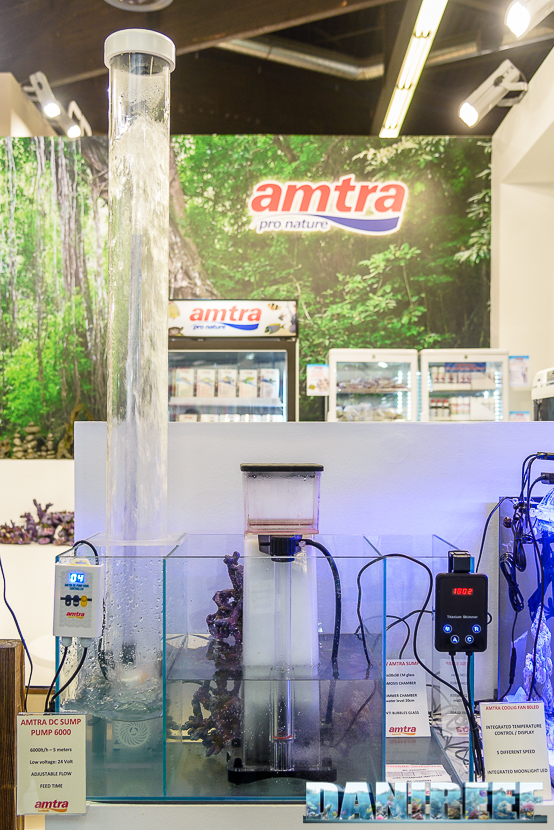 All the other products 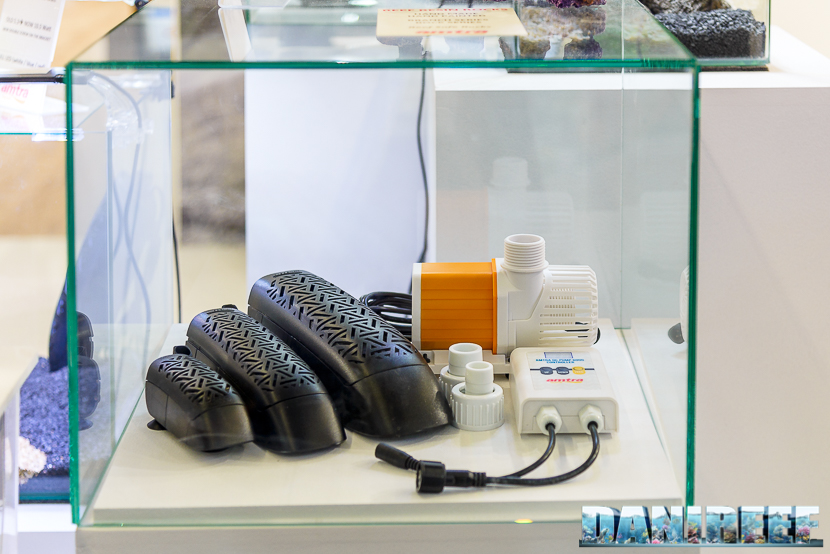 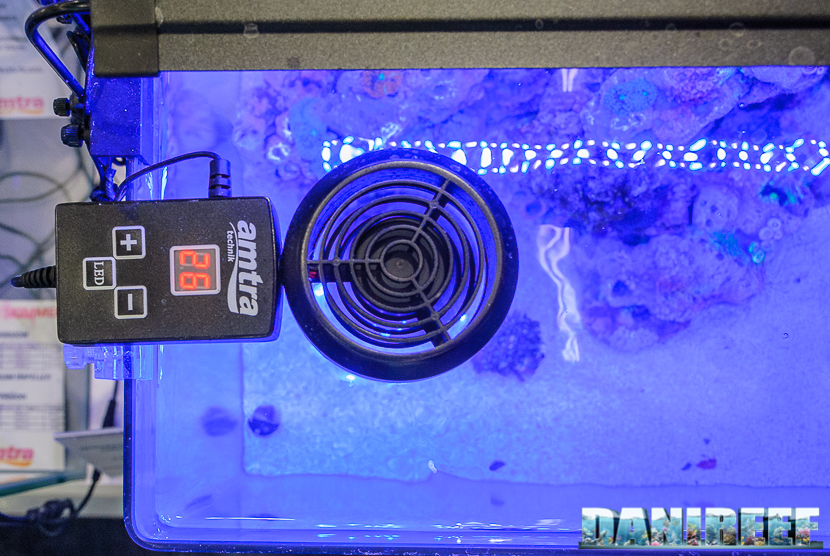 Vent for cooling the aquarium, with incorporated LED for lunar light as you can see in the following picture. 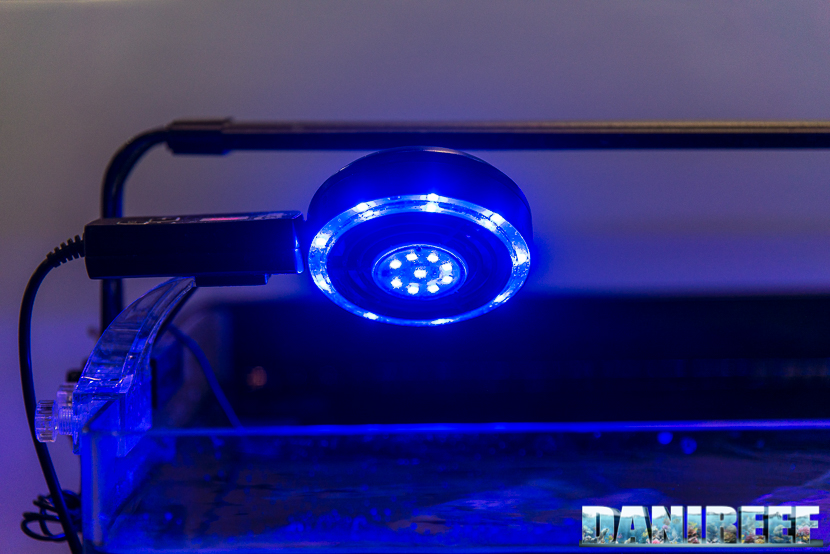 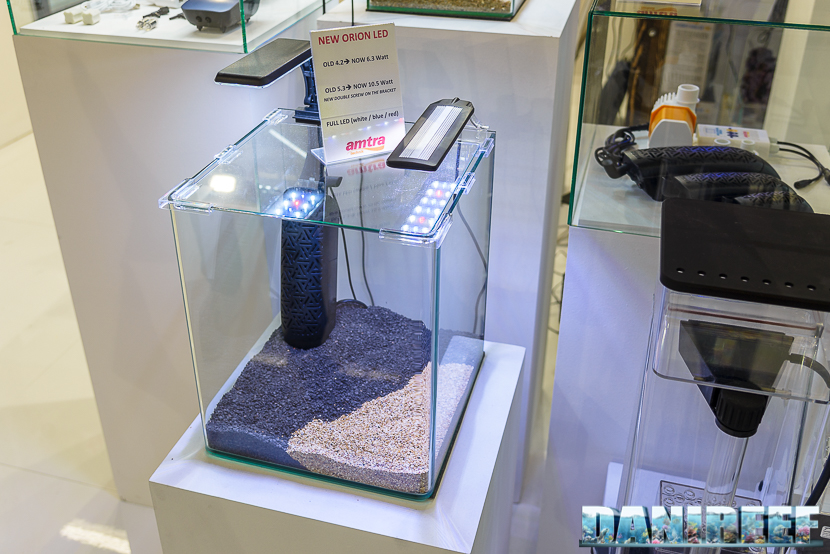 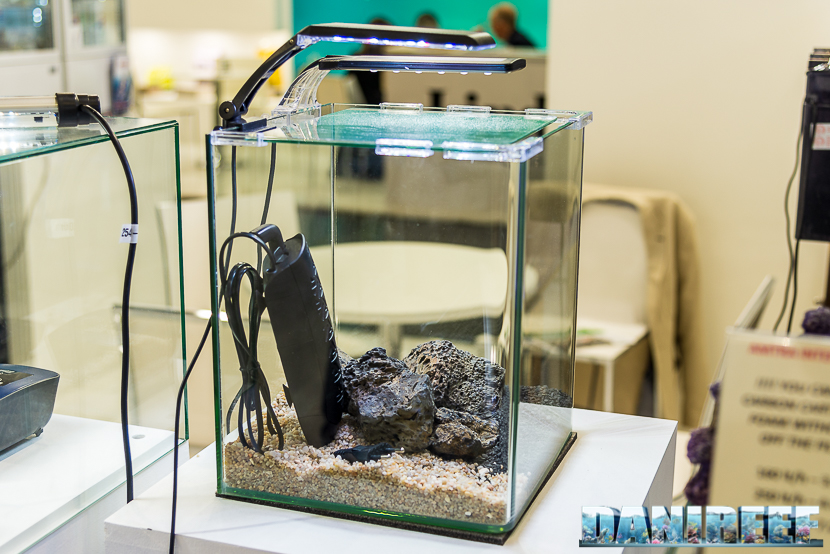 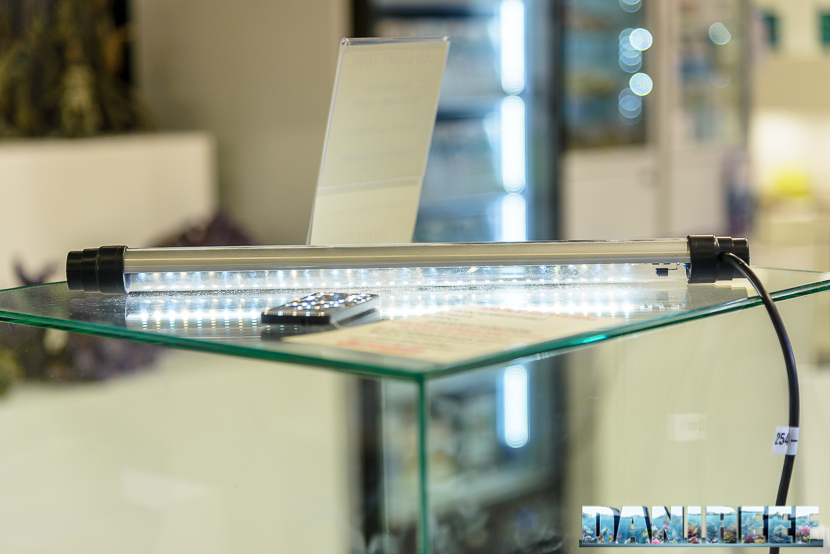 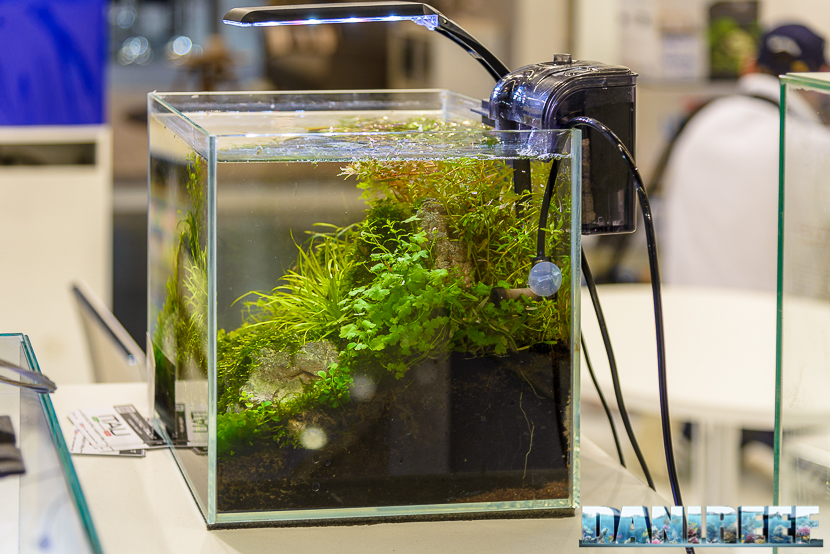 A small external filter and a lamp on a nicely set up cube. 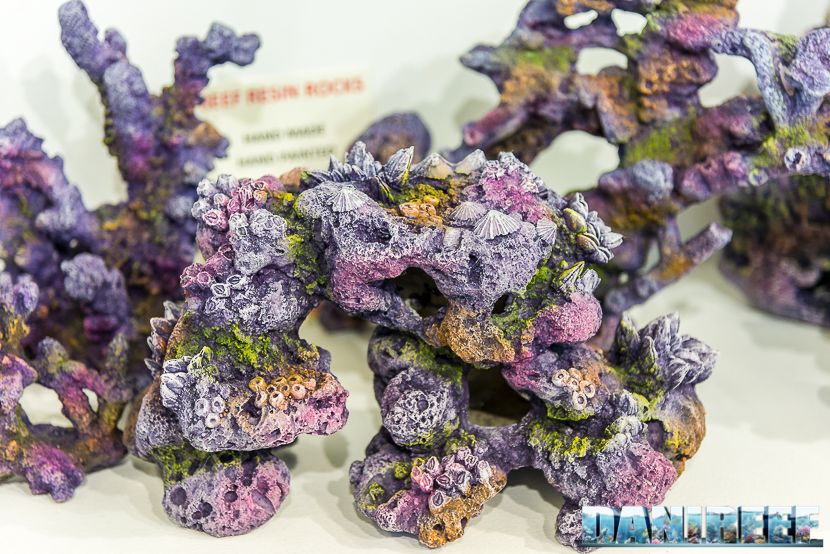 For further information about AMTRA‘s products we send you to their official site. We invite you also to read our Editorial about the fair to learn about our point of view on this 36th edition of Interzoo 2018: