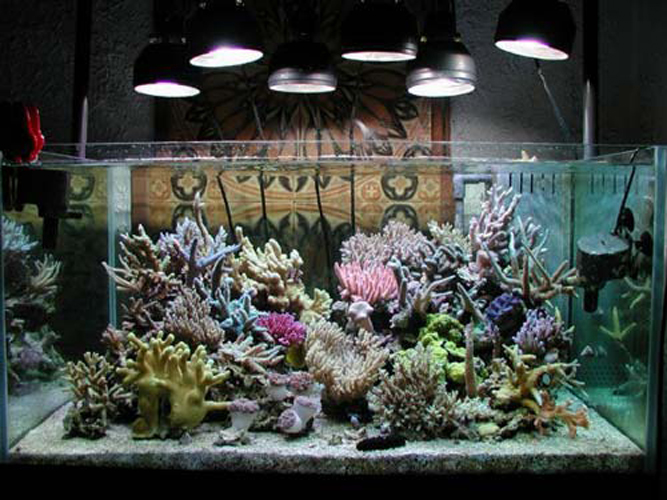 A minimalist approach to rock in a Japanese reef.

We all know that live rock helps create a more natural environment in our captive reefs.  It inoculates the tank with numerous strains of bacteria that help metabolize waste and keep your nutrients in check.  It smuggles in all manner of fauna that will eventually populate the aquarium and make up a large portion of your clean up crew.  It offers the capacity to help buffer the water keeping your PH stable.  With some establishments charging $10 or more per pound and advising 1-1.5 pounds per gallon of tank volume, you might want to really think about what you’re investing in before filling the tank up with rock.

Do you really need a minimum of one pound of live rock per gallon of tank volume in order to properly maintain your tank?  Does all of that rock really help or is there a point of diminishing returns?  I’m sure if someone were so inclined they could figure out how much bacteria is necessary to filter a certain amount of various nutrients but live rock is so variable in density and porosity that to nail down an actual weight would be near impossible.  The population needed to properly filter each tank would also vary greatly, so why is it that most people still go by the rigid 1:1 ratio?  It really doesn’t make much sense when you start to think about it.  Filling a tank with rock is counterproductive and will only serve to make the task of maintaining optimum levels that much harder (not to mention “Rock Walls” are just ugly.  It’s a scientific fact, look it up).  Too much rock and you end up creating issues with flow that foster pockets of detritus and ultimately a large reduction in actual operating volume of the display.

When we test our levels we remove a small amount of water from which we get the results.  Calcium carbonate rock acts like a chemical sponge and the levels present in your water are close if not equal to what is contained in the rock.  Water changes will remove what’s in the water but if the levels in the rock are above that the nutrients will leach back into the water seeking equilibrium.  Aquariums filled with rock have much less water volume and that can seriously effect the stability of the system.  It’s easy to visualize this if you think about holding a match under a shot glass, it would quickly heat the water, but that same match under a large pot wouldn’t change the temperature of the water by any great amount.  The same thing goes for nutrients in our reefs and this is why larger tanks have an easier time with stability.  Every piece of rock that you add is displacing water and your water is what gives you stability, not your rock.  Rock is just another form of bio-media and there are plenty of less expensive and more efficient means of giving bacteria a place to grow, not to mention more eco-friendly. 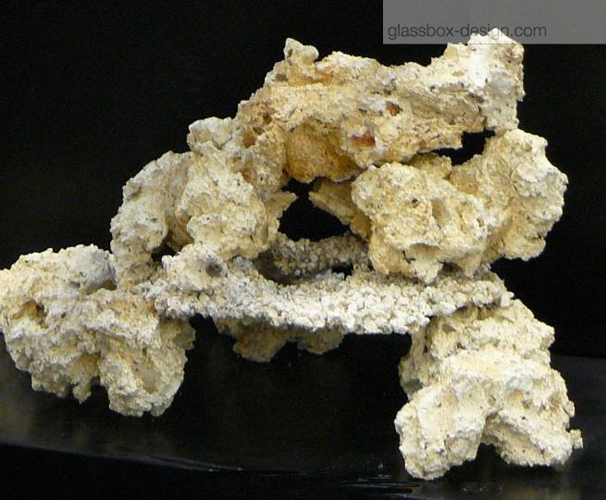 Ceramic rock can look almost indistinguishable from the real thing.

This hobby is amazing on it’s own but even more amazing is that so many hobbyists (amateur and professional) tinker and experiment with almost every aspect of it.  This constant experimentation has yielded rock alternatives from all resin pieces that look very natural to porous (and much lighter than real rock) ceramic structures laced with calcium carbonate so they retain the ability to help buffer.  I’m not a fan of the resin stuff and I personally opt more for the natural look so I lean more towards the ceramic or aragonite/concrete mixes.  The ceramics are far less expensive and much lighter so you can end up with a decent amount at a fraction of the cost of going with just live rock.  A few choice pieces of actual live rock to kick start a system is all you really need and the rest of the structure will start to look more natural very quickly.  The rock structure itself is just that, a structure for the corals you will eventually be adding so it doesn’t matter what it actually looks like for now since as long as you maintain the tank properly it should all be hidden by your growing coral colonies.  There are other ways to make the tank appear visually to have a lot more rock than it really does but that’s something for another blog as there is just too much to go over.  Once I started using less rock and building more efficient structures, I found it a lot easier to keep all of my levels where they are supposed to be.

Contrary to popular belief, it doesn’t really matter where rock is from geographically.  You can find branching and porous forms in the same place you can find dense boulder like rock.  The type of coral that created it plays a bigger role in it’s form, as well as what other life has colonized it after it’s initial die off, more than the locale from which it was collected.  It’s always amusing to hear people go off about looking at a piece of rock and knowing where it is from just because it has a certain structure to it.  Consulting a Magic 8-Ball about your day would give you more accurate information than just looking at a piece of rock and trying to divine it’s country of origin.

As a professional in the hobby, I have always seen live rock as a big hurdle for the newbies just looking at getting their first tank.  It’s expensive and if you listen to the wrong people you can end up buying more than you would need for your next 2 tank upgrades before you even buy your first fish.