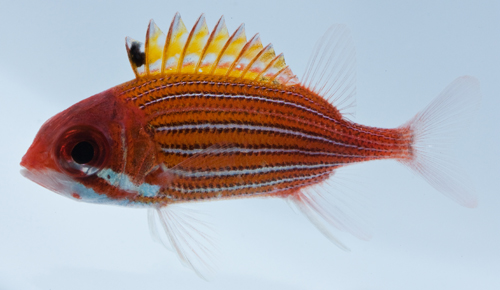 Although it is not uncommon for the squirrelfish, Holocentrus adscensionis to show up in Long Island waters as a tropical stray, the deepwater squirrelfish, Sargocentron bullisi is a far less frequent visitor.In fact, the last known record of S. bullisi in New York State is a specimen that I collected nearly 20 years ago. As its name suggests, S. bullisi  is a deep reef species, occurring within a depth range of 33-110 meters in its normal geographic range: the tropical Western Atlantic, Gulf of Mexico, and Caribbean. The specimen pictured above was caught on a dive in Shinnecock Bay, in Southampton, NY last week with the help of my wife, Ashleigh. Distinguishing characteristics for this species include a black spot between the first and second dorsal spine, and dark brown stripes separating the red from the white stripes. The brown stripes add definition to the already bright red of S. bullisi making it, in my opinion, the most striking of all the Atlantic squirrelfish. I just confirmed the capture of a second specimen on the other side of the bay by my friend, Bob Janke yesterday, so I’m guessing there are more deepwater squirrelfish out there waiting to be rescued from the onset of winter. 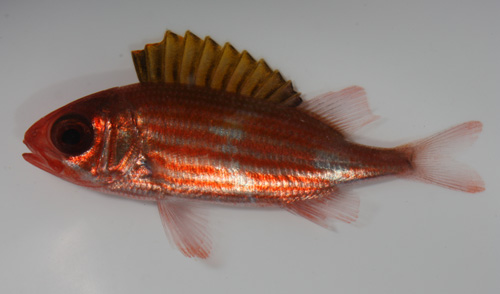