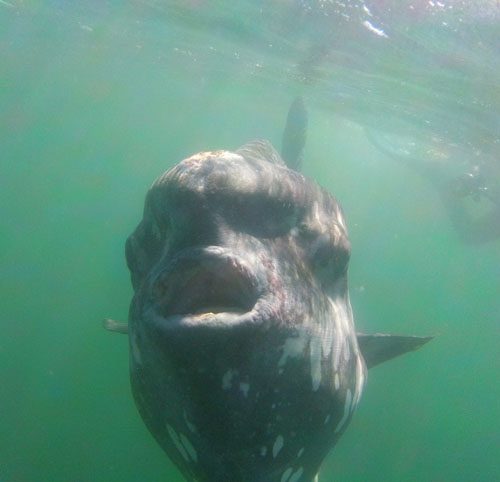 One of the main reasons we dive, snorkel, hike, visit zoos, and keep pets, is that there is something magical about having a close encounter with another species of animal. Judging from my own experiences, the thrill is greatest when the animal is enormous and observed in the wild. The other day, while out on a dive with Halftime Wreck Diving in Southampton, NY, I had an opportunity for such an encounter. We were between dives on a shallow-water wreck just a few miles from shore when a large Mola mola approached the boat. We quickly put on our snorkel gear and jumped in. I expected to get a few seconds of video, if I was lucky. In the past, when I’ve tried to approach ocean sunfish, they have taunted me by moving just out of sight. Apparently, this one was a little more trusting and let us both get very close. At one point I put my hand out and gently rubbed it’s parasite-laden head, after which it actually started following me. The whole thing lasted about 15 minutes, until it got spooked by a humpback whale crashing through a school of menhaden nearby.

We estimated this fish to be about 800 pounds. Weighing in at up to 5000 pounds, the Mola mola is considered to be the heaviest bony fish. They swim by sculling with their very long dorsal and anal fins, while what’s left of their stout caudal fin is covered in flesh and used for steering. Like other members of their highly-evolved order, they have no pelvic fins. Sunfish feed in deep, cold water, mostly on small, soft-bodied invertebrates like Ctenophores and jellyfish. Between dives, they warm up at the surface by floating on their sides to maximize their ability to absorb sunlight. This is why they are called sunfish. Their scientific name comes from the Latin word Mola, which means millstone. This seems appropriate as they really do have the appearance of a giant disk, carved from a single piece of rock.

Check out this video for an unusually close look at one of these awesome fish.