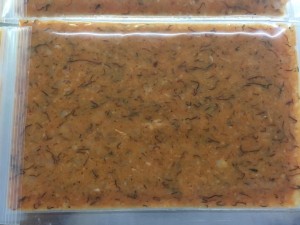 LRS Reef Frenzy foods continue to amaze me with their ongoing effort to produce the best frozen food available. Most recently LRS has added Live Blackworms to their standard “Fish Frenzy” ingredient list. LRS owner Larry Dupont contacted me a few weeks back asking if I would be interested in trying a new blend he was working with, which was formulated for breeding and particularly fastidious fishes. Now while I don’t do a whole lot of breeding these days, I do work with incredibly finicky fishes on a daily basis so I was all-in to give this blend a go. This last shipment I received contained two unbelievably picky Blue Spotted Pufferfish (Canthigaster solandri) which refused to eat any of the eighteen frozen (or chilled) foods I had on hand. Yep, eighteen foods they snuffed their noses at. While these fish aren’t multi-thousand dollar animals, all fish that pass through my office get the five-star treatment. I received five of these fish and three took to prepared foods quickly as I generally expect from this species, although these last two would only nibble at little neck clams (however not ingest). Luckily the two puffers still took enriched live brine with gusto so not all hope was lost.

The moment I received the trial food from LRS I had the box opened and food prepped to feed my conditioning system. All the fish went absolutely ape for this new blend, which contained smaller particles than the standard Fish Frenzy that worked great for my smaller fishes. All the fish had been fed and I still had a small amount on my cutting board so I tossed it in with the two picky puffers. To my surprise they both went after it, chewed it up, spit some out, chewed it up again and finally… ingested huge mouthfuls! Within seconds they were back at the glass begging for more. You can check one out in action in this video.

All of this could have been completely anecdotal. However when two fish received at the same time go crazy for a frozen food after refusing eighteen options over three weeks, including two options from LRS (“Fish Frenzy” and “Herbivore Frenzy”), this tells me there’s something special enticing them… and it sure wasn’t me singing Smashing Pumpkins at the top of my lungs that night (or was it?).

You can find some more info on the new LRS Blackworm blend here, where Larry also touts the idea of bringing back their freshwater blend that has cichlid and discus breeders chomping at the bit for more.