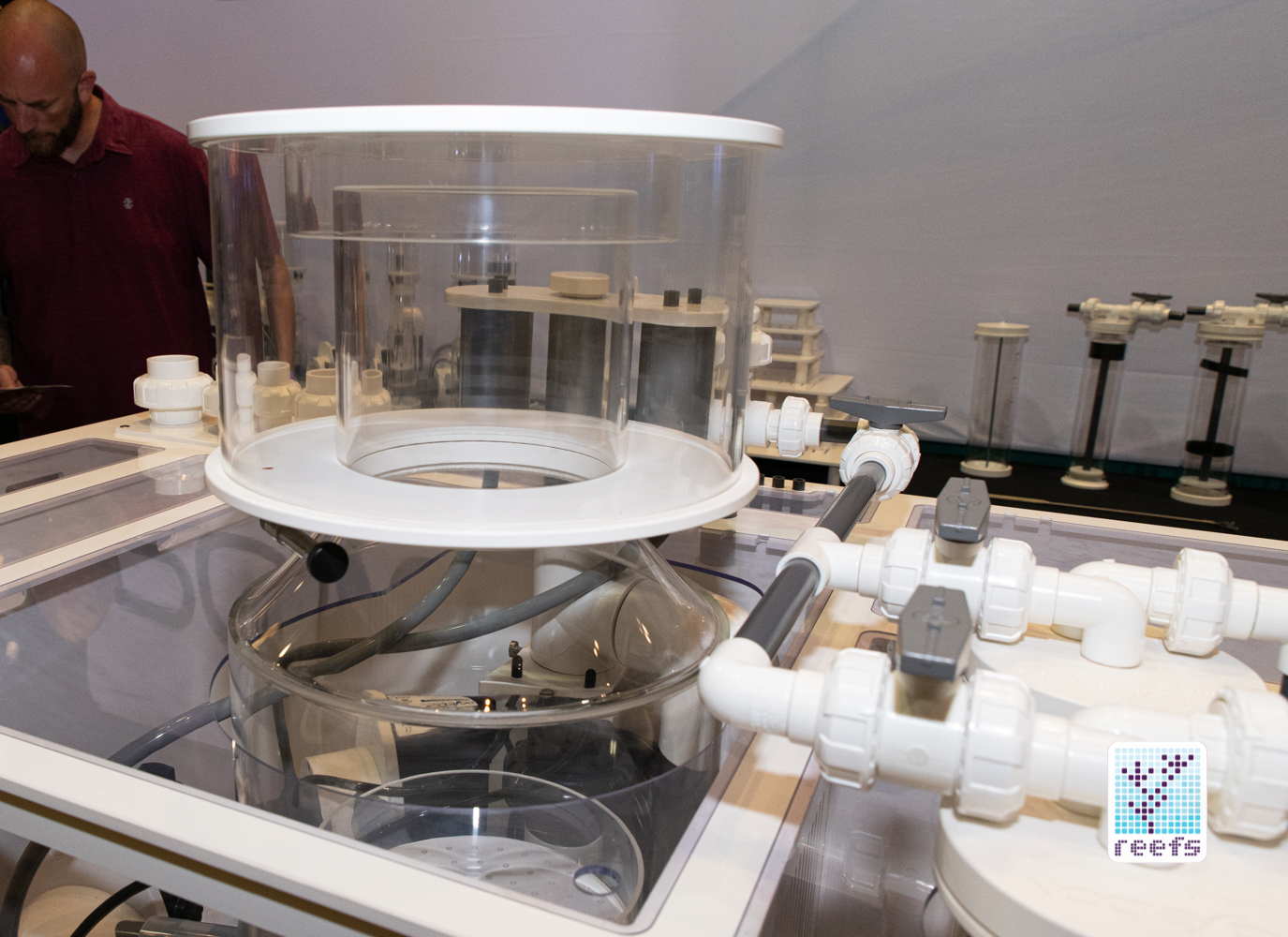 A year ago, at the MACNA show in Las Vegas, I was approached by two nice gentlemen from an unknown to me then company, Poseidon Flow Technologies. They showed me their latest and, at that time I assumed, only product, a salinity/specific gravity pen meant for the aquarium hobby use.

Fast forward to Labor Day weekend 2019, I had the opportunity to re-visit the company and let me tell you something- they came back to Orlando with a “go big or go home” philosophy, having one of the most impressive booths at the show. Skimmers, UV sterilizers, sumps, dosing containers, you name it. I was blasted with genuine products and presented with truly innovative new gadgets, and left the corner space the company occupied with a single thought- this is legit! 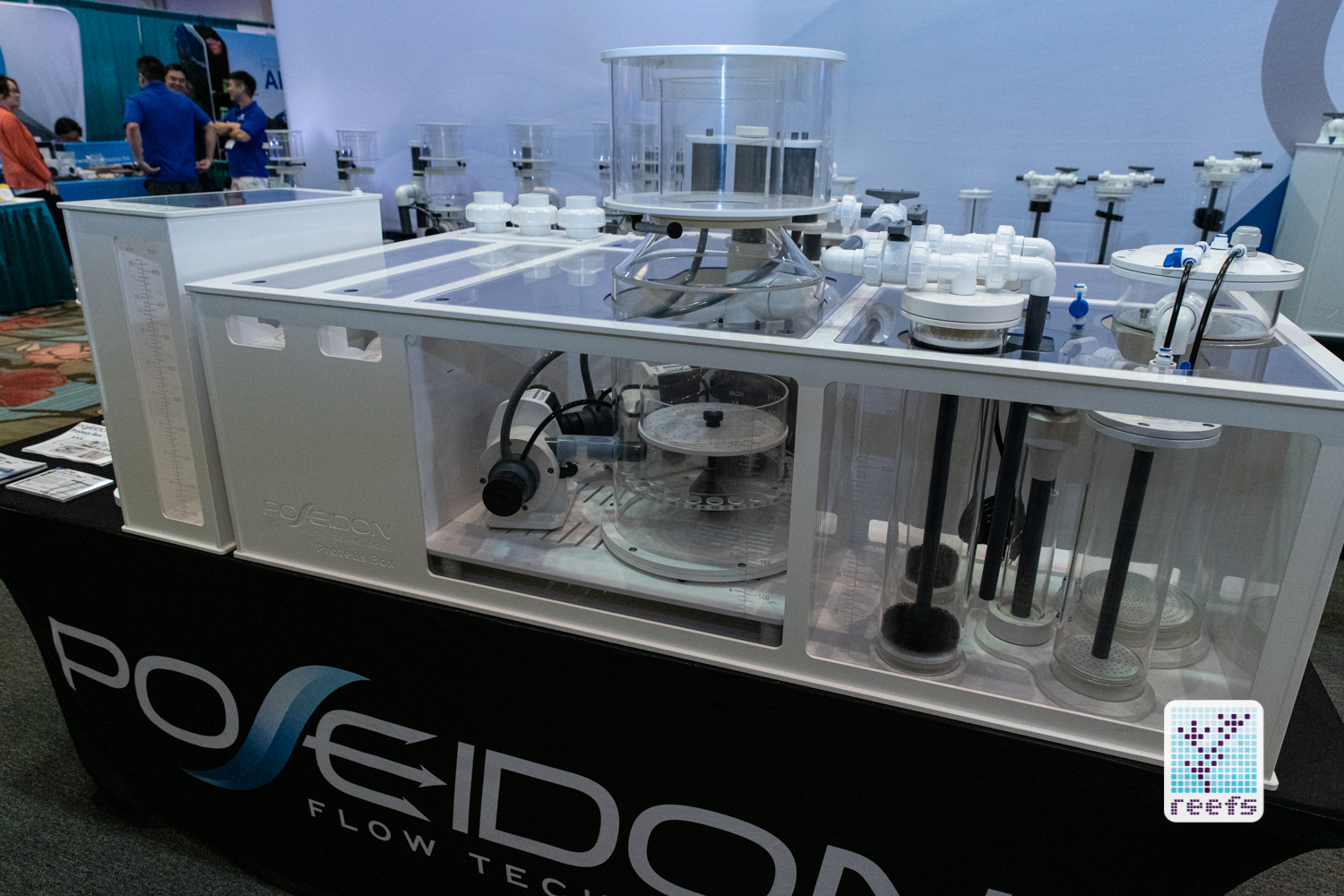 Let’s start with the small stuff first and when I say small, I don’t mean unimportant, but rather “bread and butter” type of aquarium tools almost every aquarist is aware of.

My personal favorite was an adjustable length Titanium algae scraper. Titanium, the most saltwater -friendly metal known to an aquarist. Poseidon Flow Technologies had one on display at MACNA and I was super impressed with its build and functionality. Although not equipped with one at the show (for obvious reasons), the algae cleaner comes with a Titanium blade. You can replace it with any double-edged metal blade you wish, but let’s be real here- anything but Titanium would be the wrong choice. It’s like getting a genuine Samurai sword and sharpening it with a kitchen knife sharpener. You don’t do that. 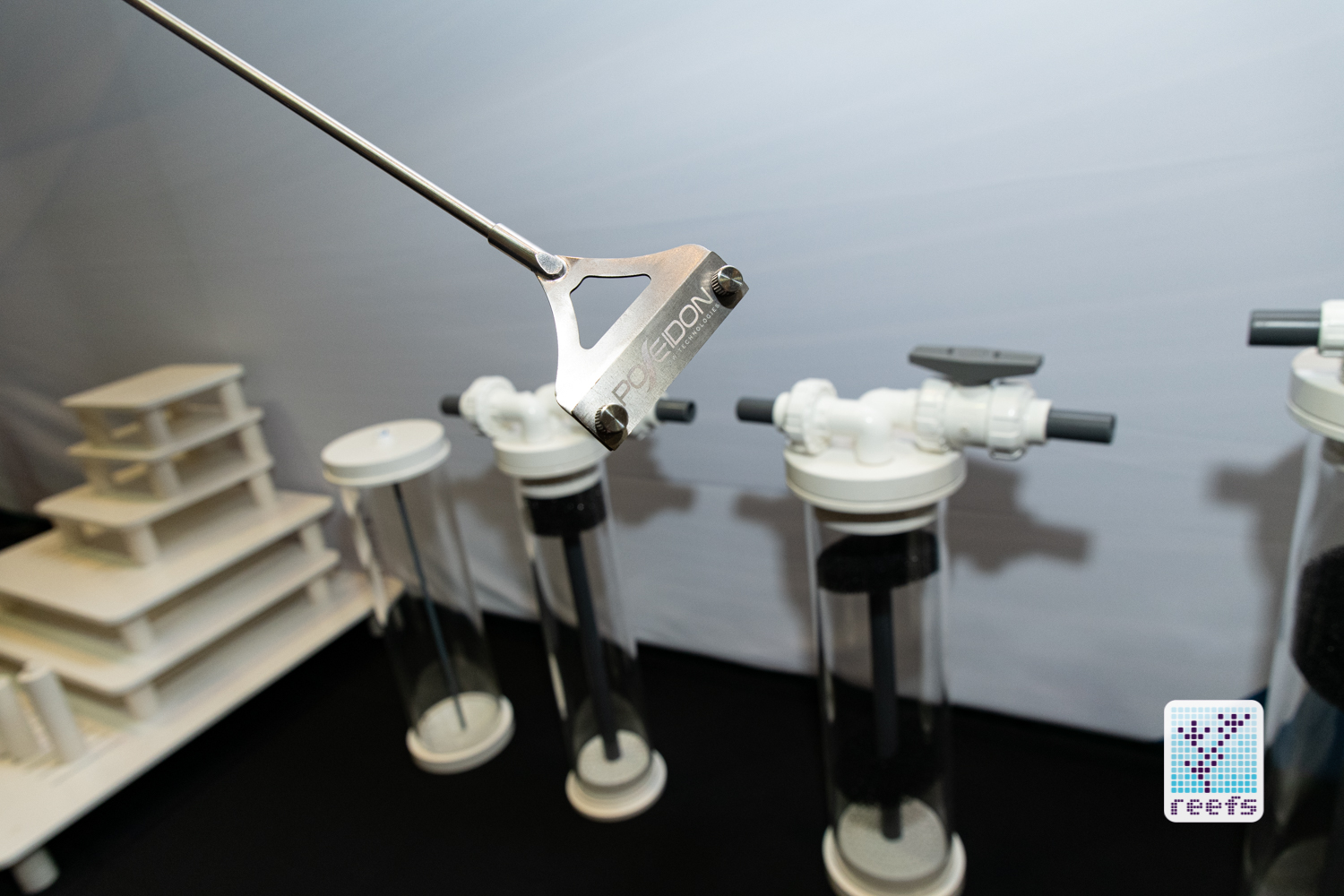 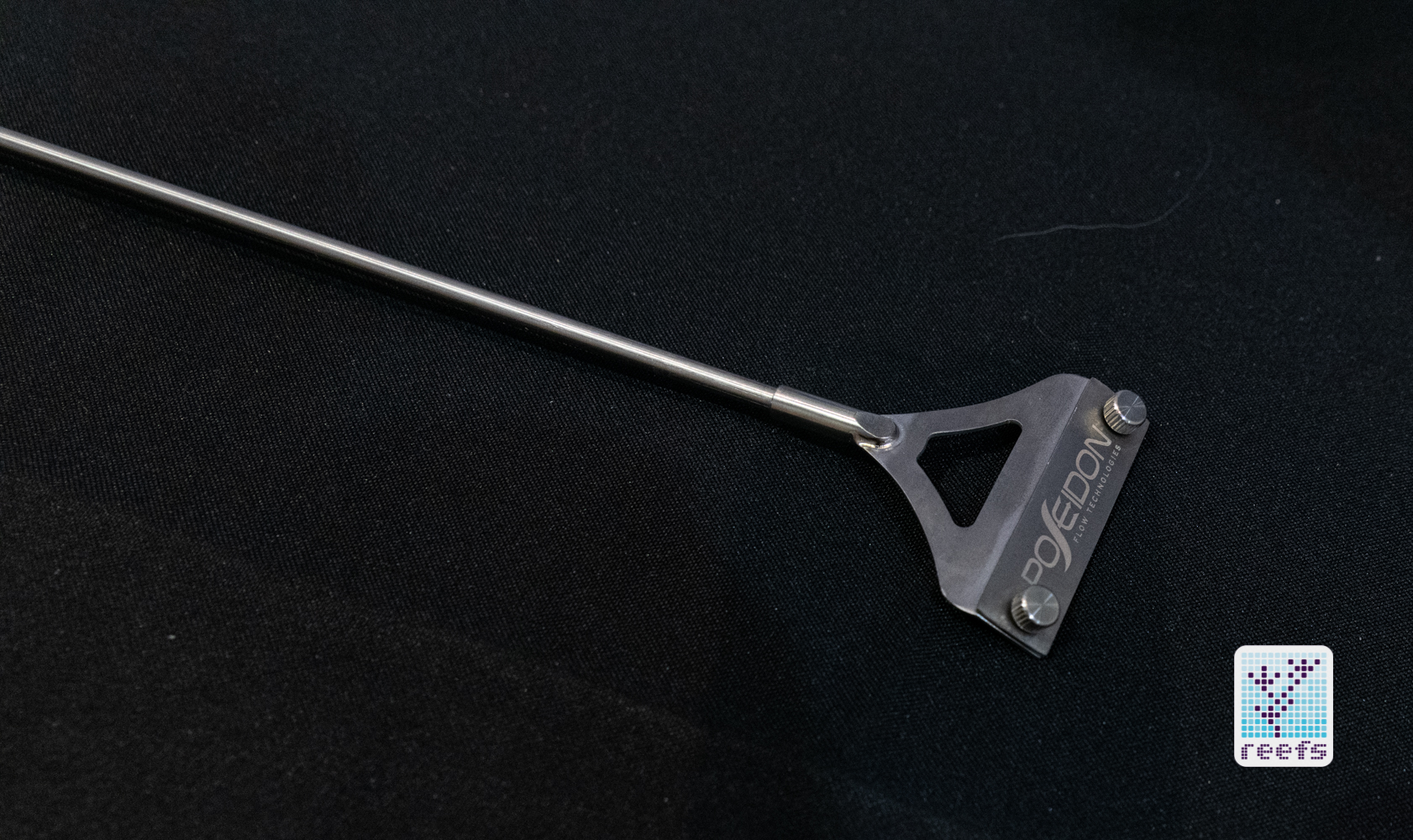 Moving on, did you ever face the dilemma between using a mesh filter sock or a felt one? Let me introduce you to this ingenious idea, courtesy of Poseidon Flow Technologies- a filter sock that’s both felt and mesh. It looks like Swiss cheese- the inner layer is 15 micron felt, but with holes that allow the water to pass through the second, 200-micron mesh outer layer when the inner one clogs up. Oh, and they retail for around $5 each. Brilliant! 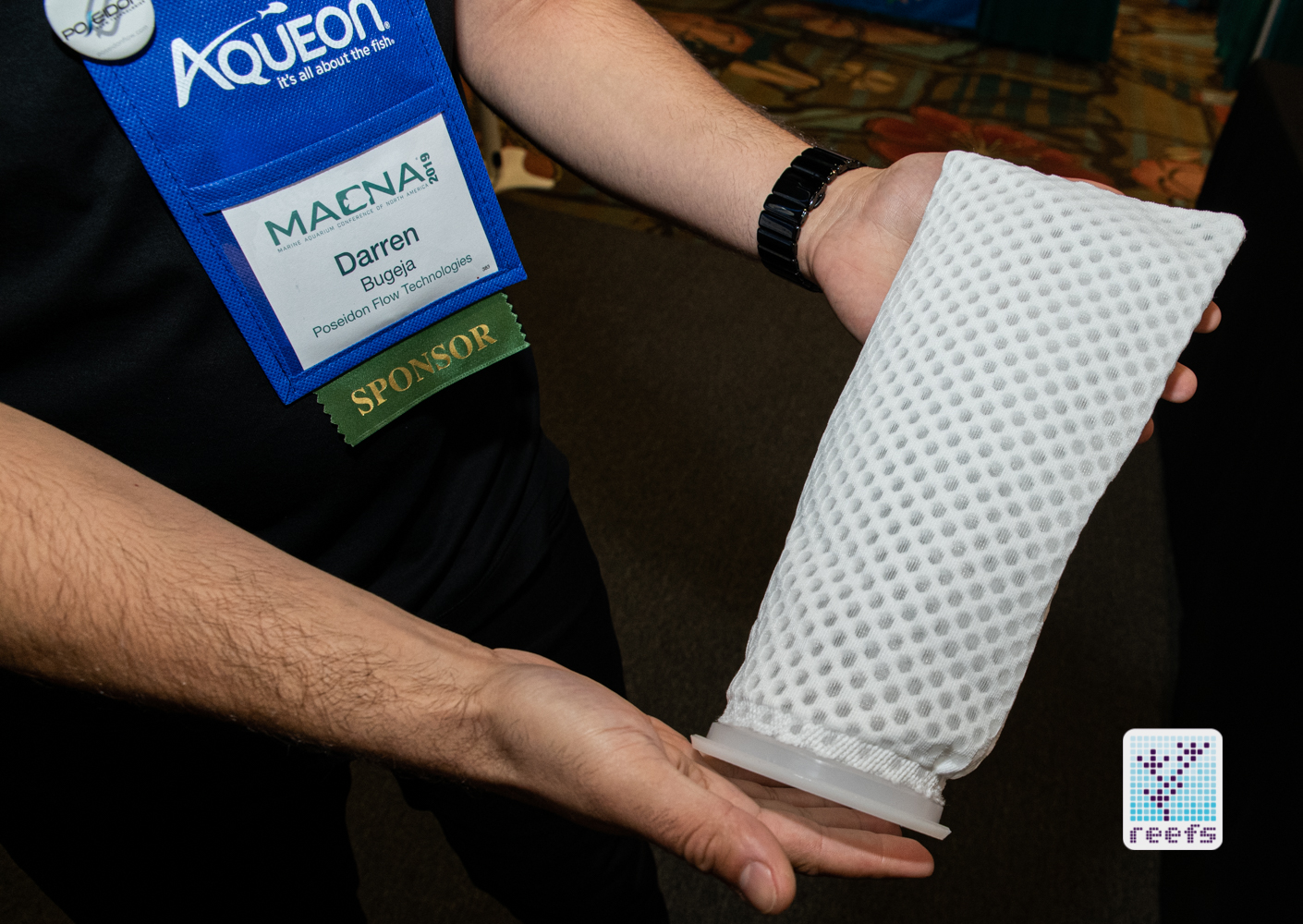 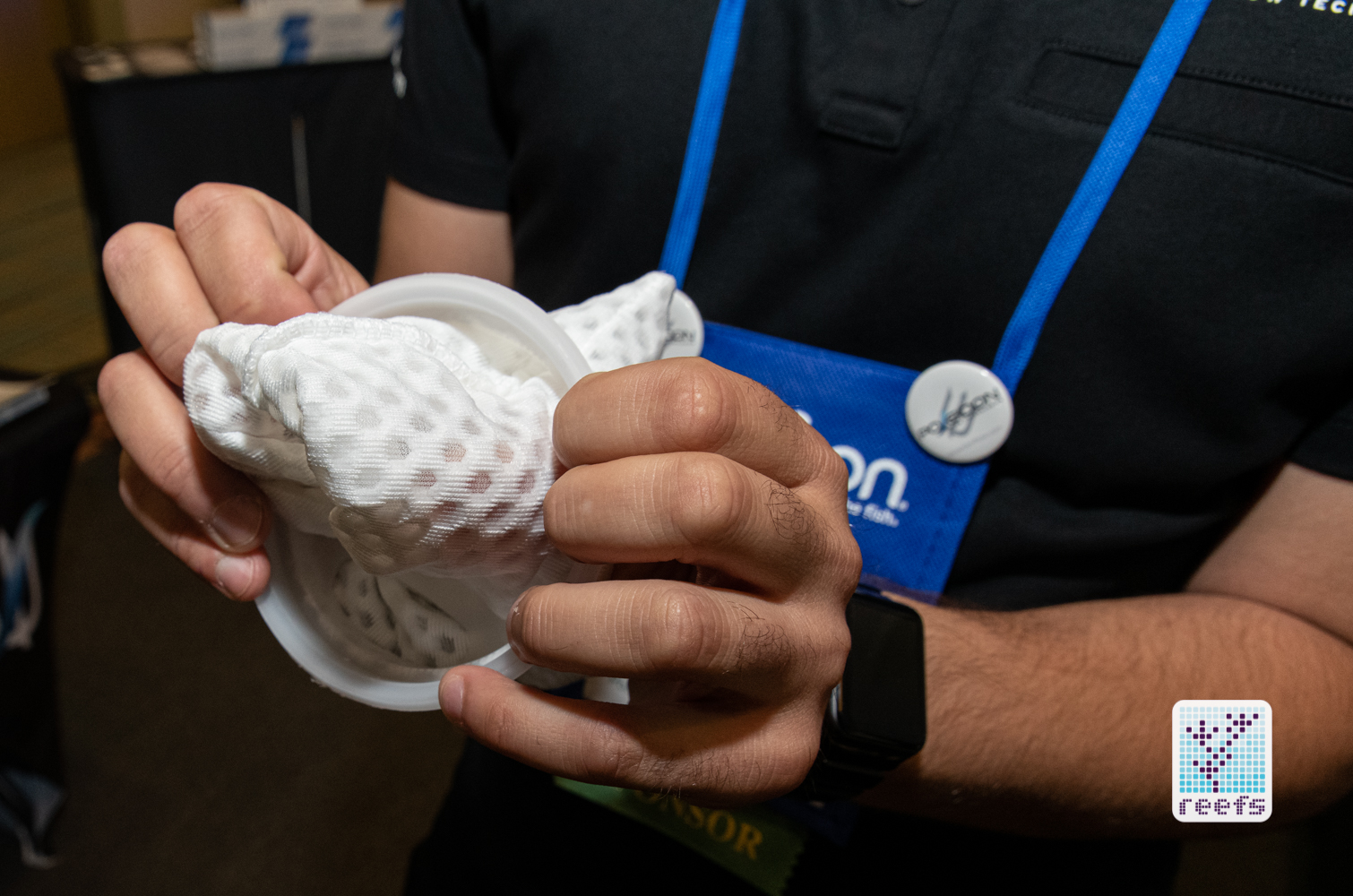 That’s the “small” stuff. Then we enter a realm of high-quality, serious equipment – sumps, calcium reactors, media reactors, saltwater mixing stations, ATO containers, and more. I can’t cover all of them in detail here in this article, but what I can tell you is that they all share some common principles- Poseidon makes its equipment with heavy-duty machined PVC and thick acrylic panels. I had a little chat with Darren from Poseidon Flow Systems and he walked me through the company’s main product line, sumps. 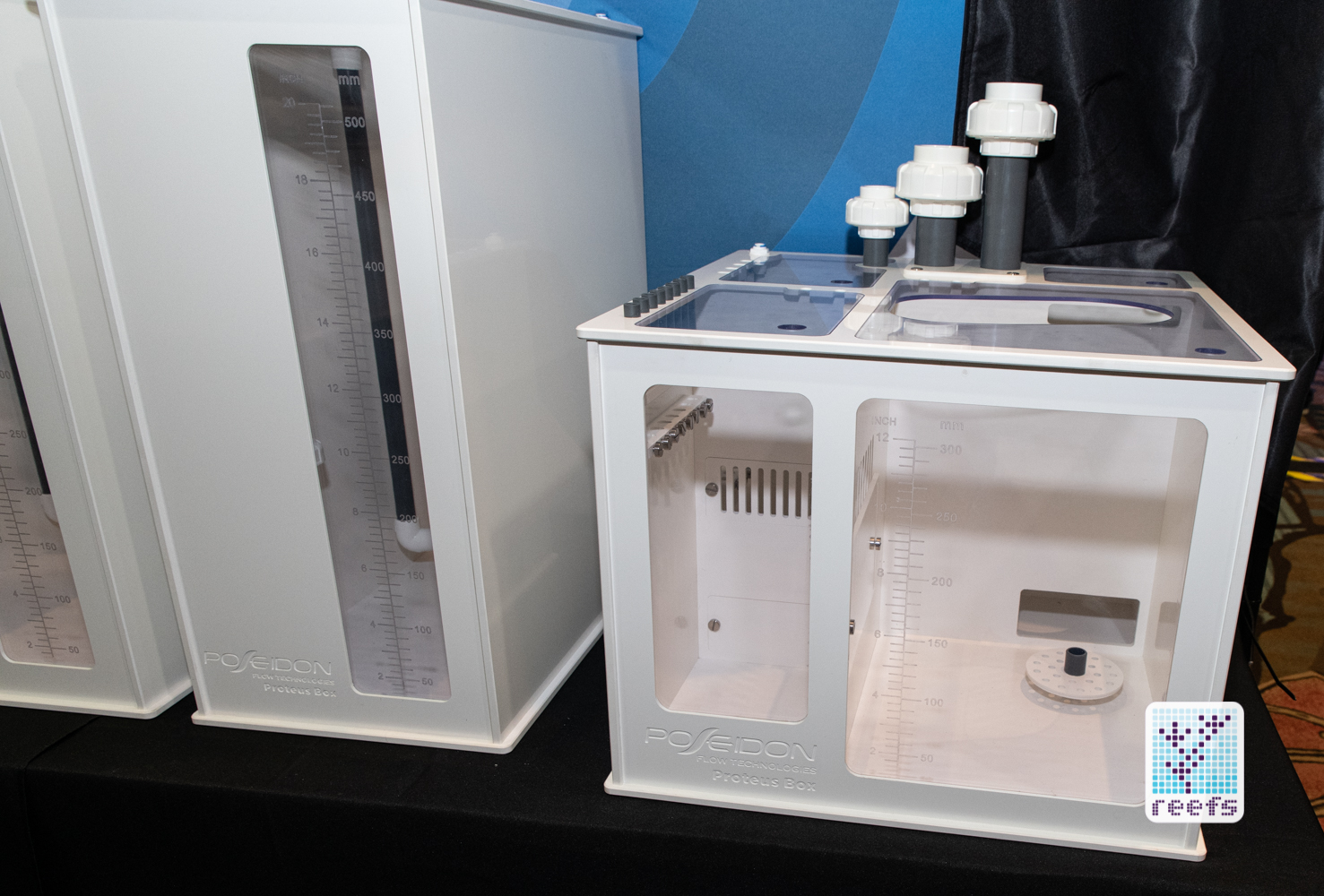 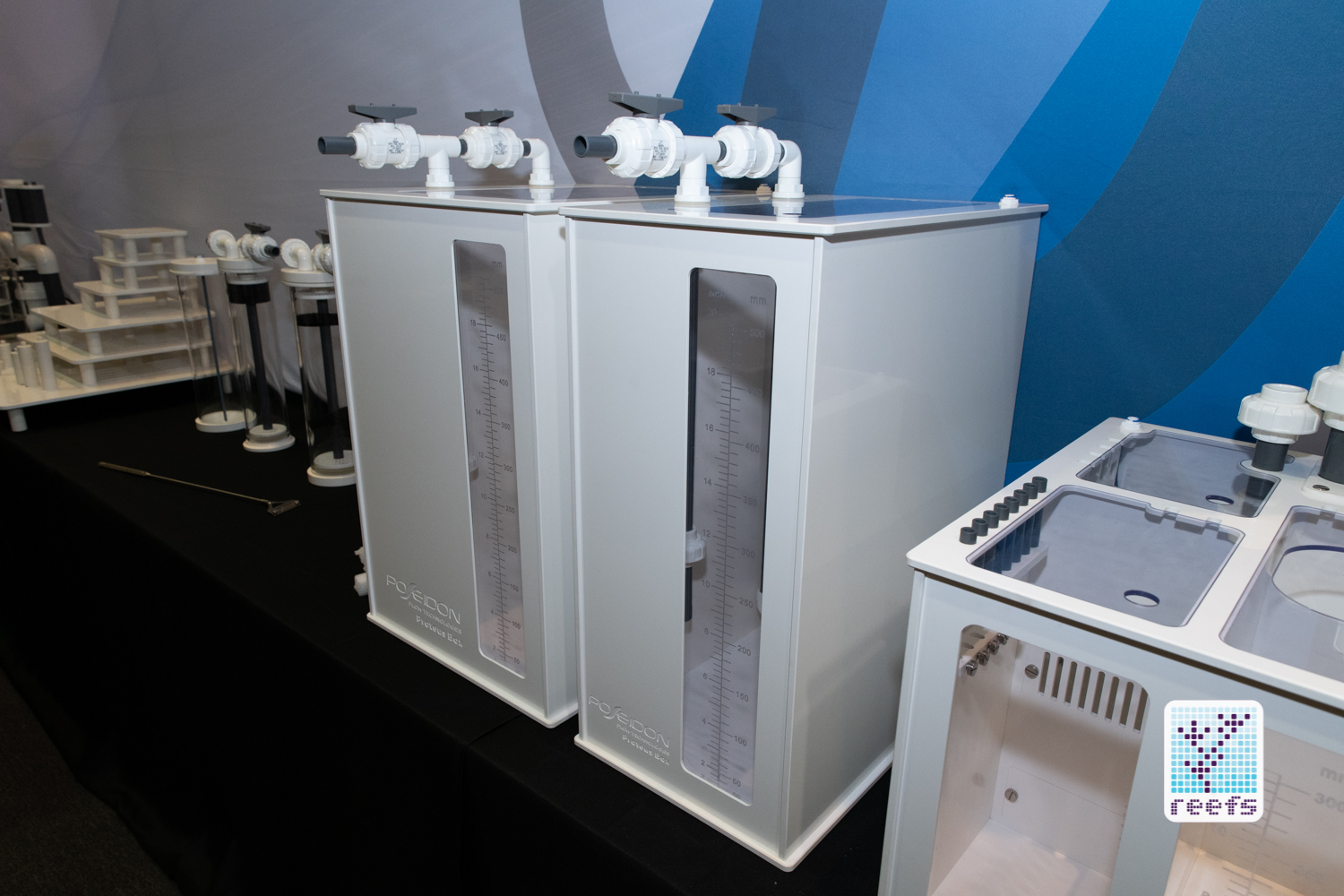 The combination of thick, transparent acrylic panels and precisely machined white PVC frame is Poseidon’s leading motive. Under that sleek, modern frame lies some innovative elements that make these sumps special. I asked Darren to explain to me the main features of the company’s sump line (which consists of several different sizes of readily available models, as well as custom options) and here’s what he had to say about them:

(Pointing at a medium-size sump loaded with various equipment) “This is our standard 2’x3’ sump, it has a [company’s own] Proteus 200 skimmer inside, rated up to 300 gallons. Water enters the sump by means of three spillways equipped with a silencer to equally disperse the flow coming from the tank into each filter sock. Water then flows down and under the skimmer, which helps to disrupt the detritus that gets trapped within the skimmer. The baffles in the skimmer section are adjustable and held by titanium screws so that you can modify the water level to the skimmer of choice. The reactors in the next chamber are plumbed with unions for easy removal and we also offer these custom cut sump lids with our sump. Moreover, we can custom cut the client’s lids to specific equipment used.”

Just looks at these marvelous geeky sumps of the future. I am totally impressed. 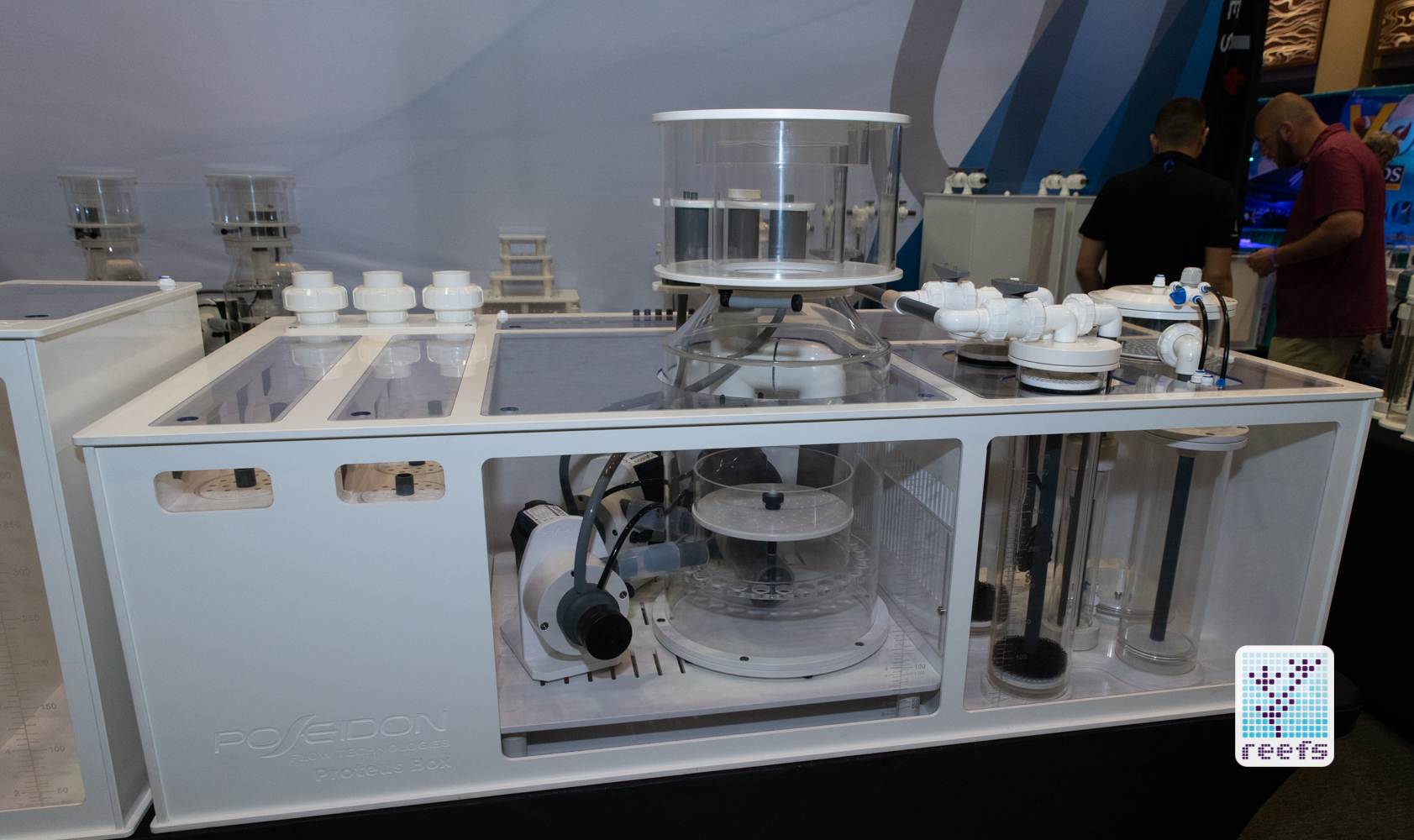 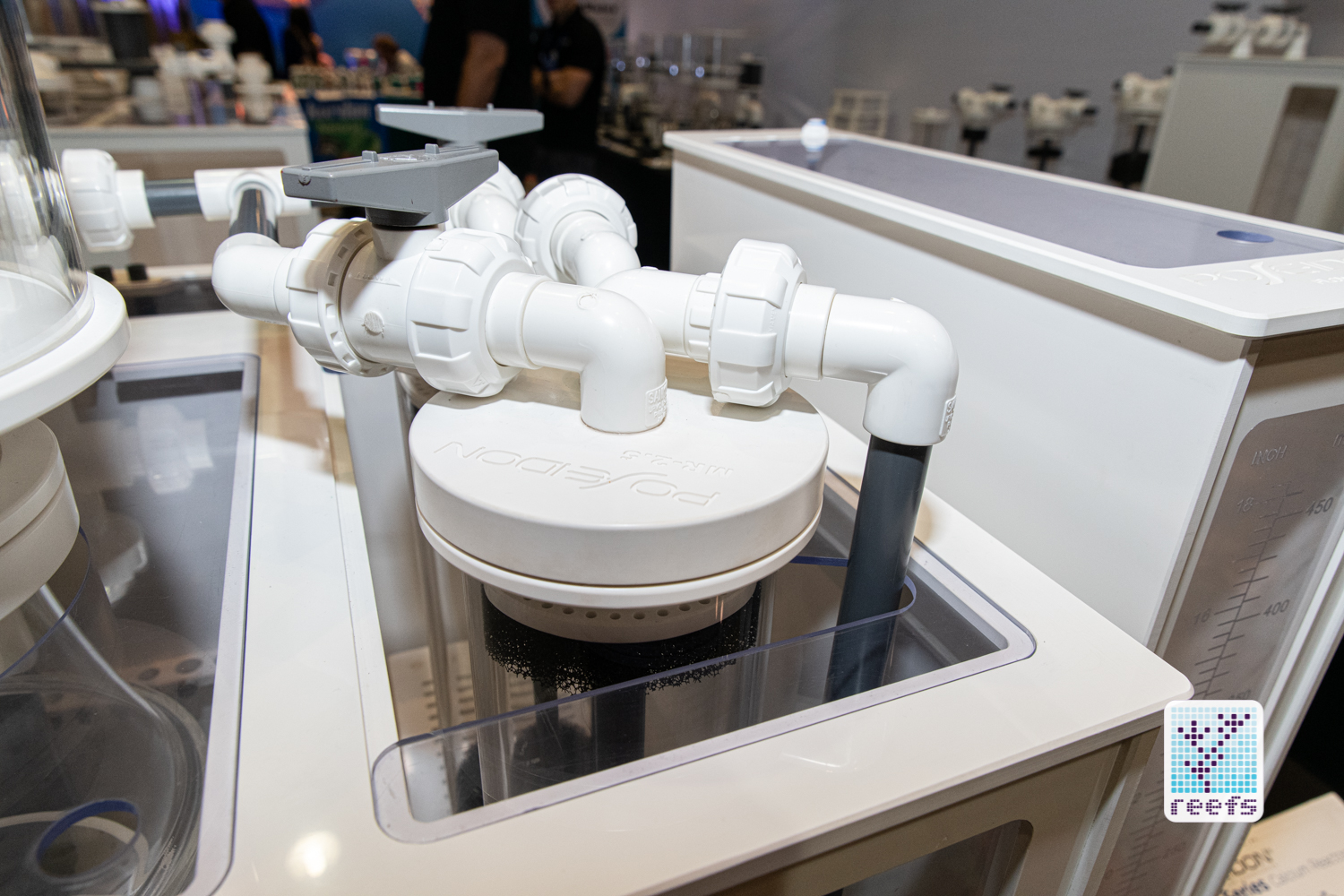 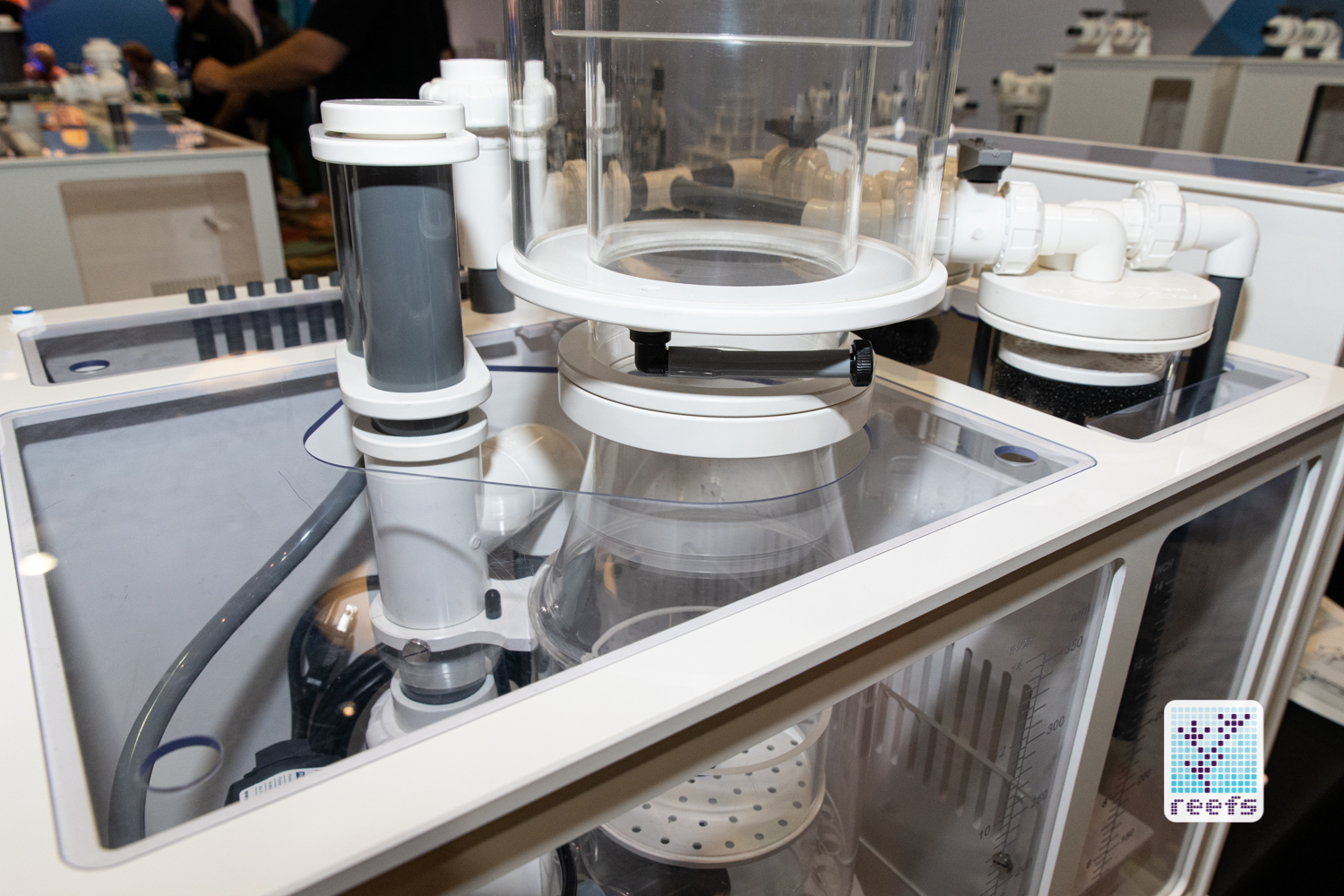 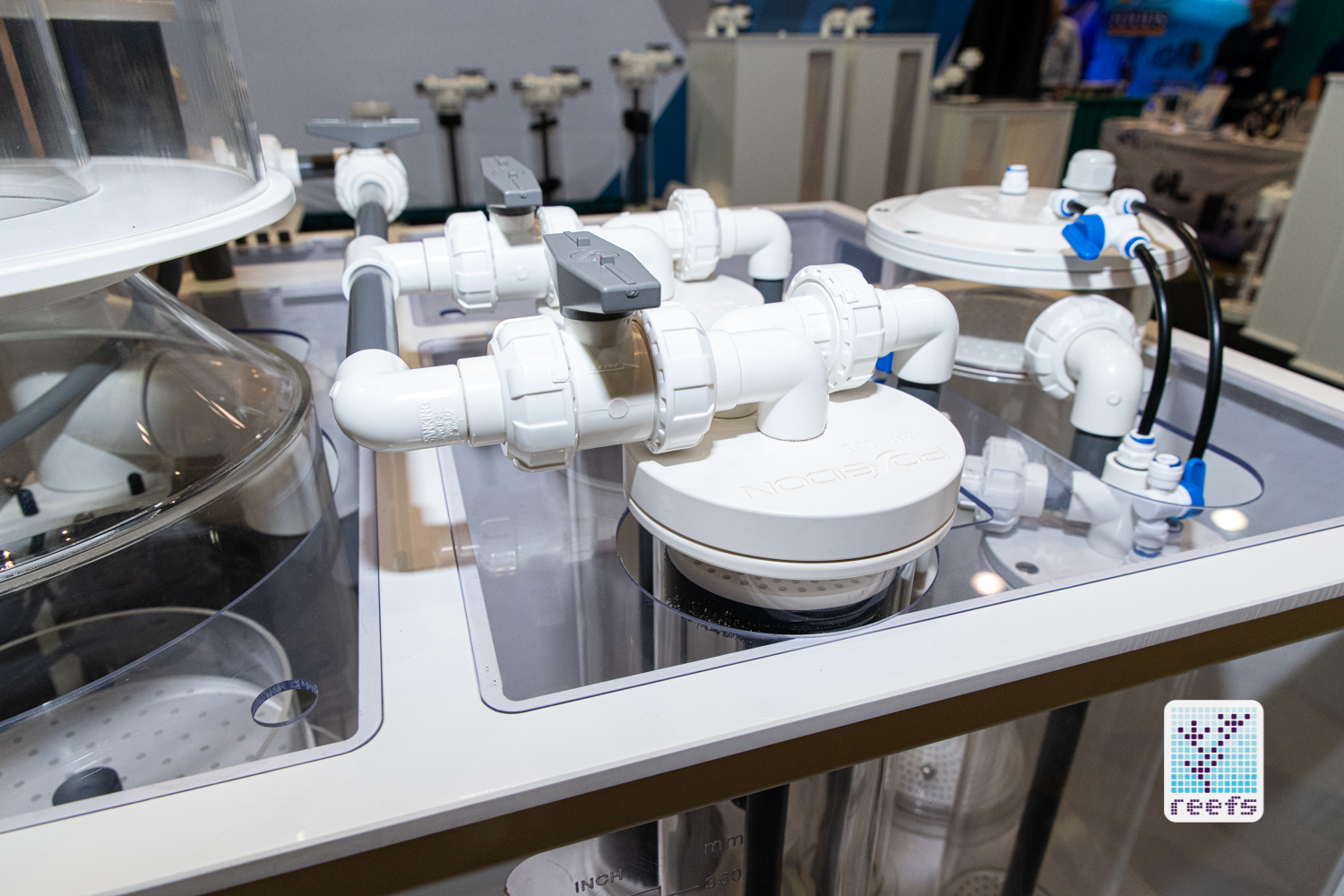 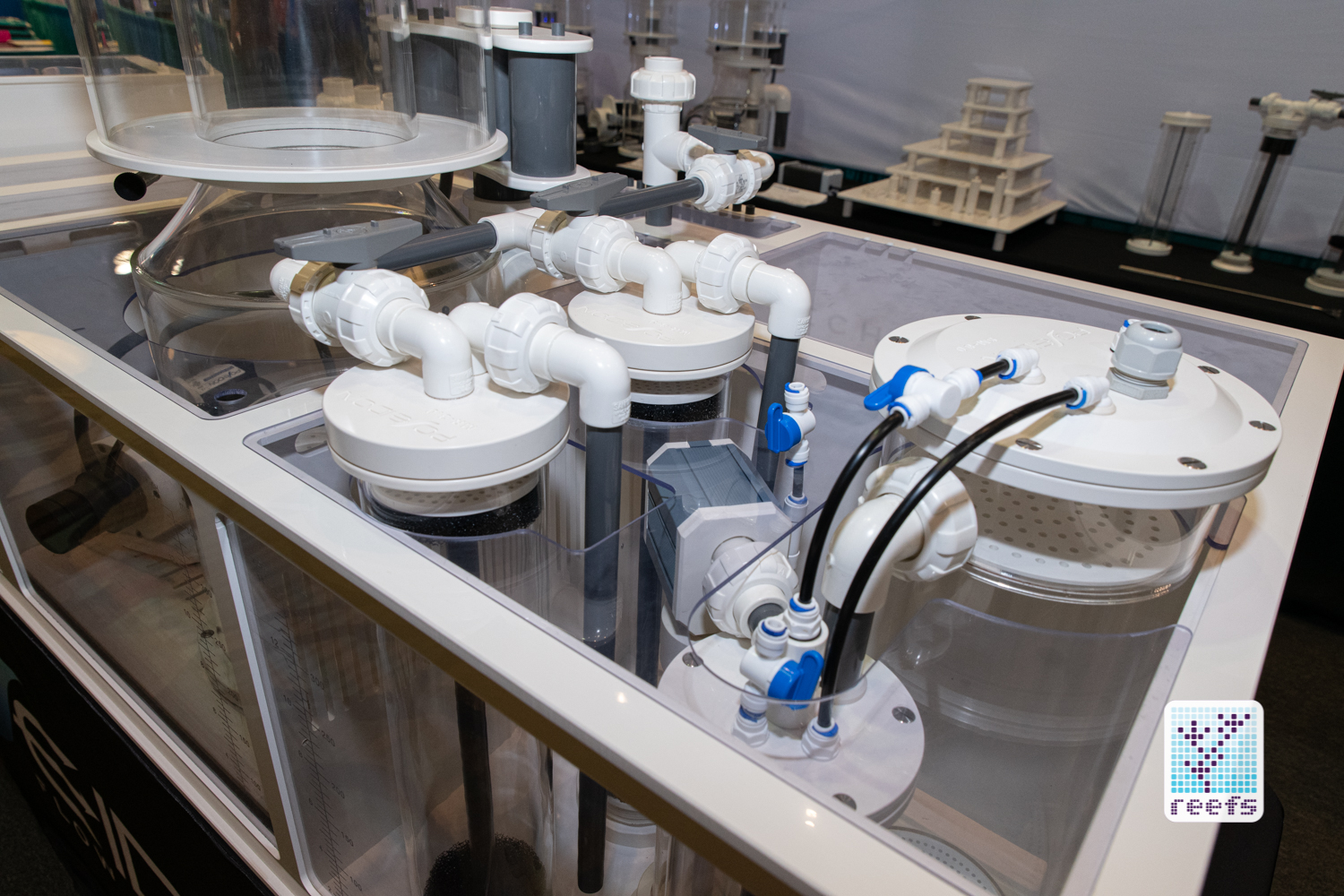 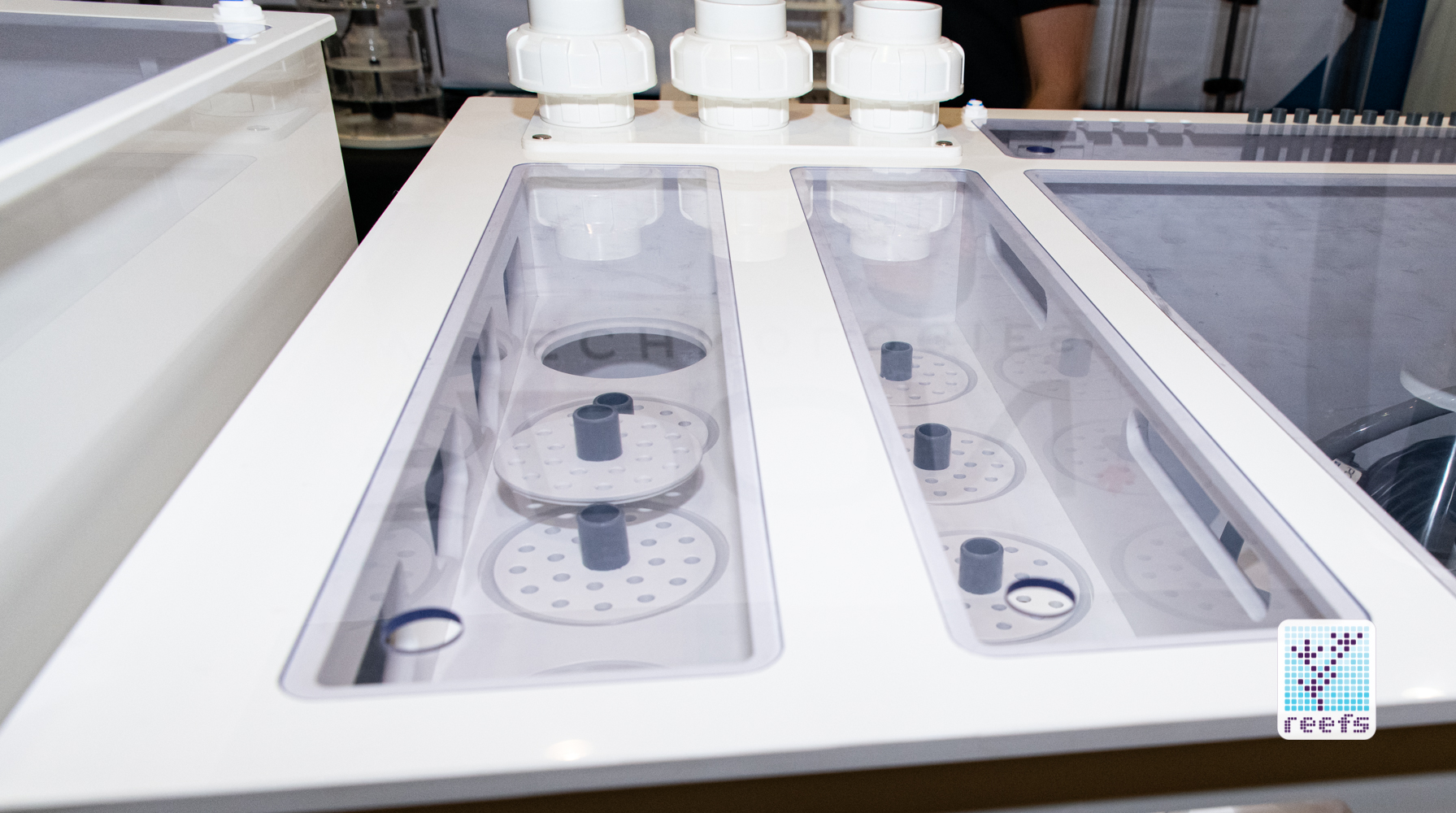 I could keep going forever- the company also makes a skimmer stand with modular legs, a UV-based ozone generator that does not require an air dryer, the previously-mentioned saltwater mixing stations, ATO containers- but I have to wrap it up. Before I go, one specific piece of equipment that deserves mentioning is Poseidon’s calcium reactor line. Although  looks similar to other skimmers on the market, Poseidon’s SM Reactor (3 different sizes available) features a built-in bubble counter and a unique gas-water mixing chamber equipped with a spiral-shaped rod in its center that helps slow down the CO2 bubbles and in result, dissolves the CO2 more efficiently (the model shown at MACNA had a see-through PVC but in the production models that part is grey to prevent algae growth). The skimmer also features what the company calls a SuperMute valve that, when open, recycles any undissolved CO2 back to the mixing chamber for higher efficiency. When you open the valve, CO2 is not recycled anymore but it allows for a drastic noise reduction in the CaRx operation. On the bottom, we have a maintenance valve which, when opened, drains some of the water from the reactor’s chamber and allows you to refill the media without taking the whole reactor out. You can also use that valve to fill the reactor back up with water, and a second valve on top of the unit can be used to purge the air out. 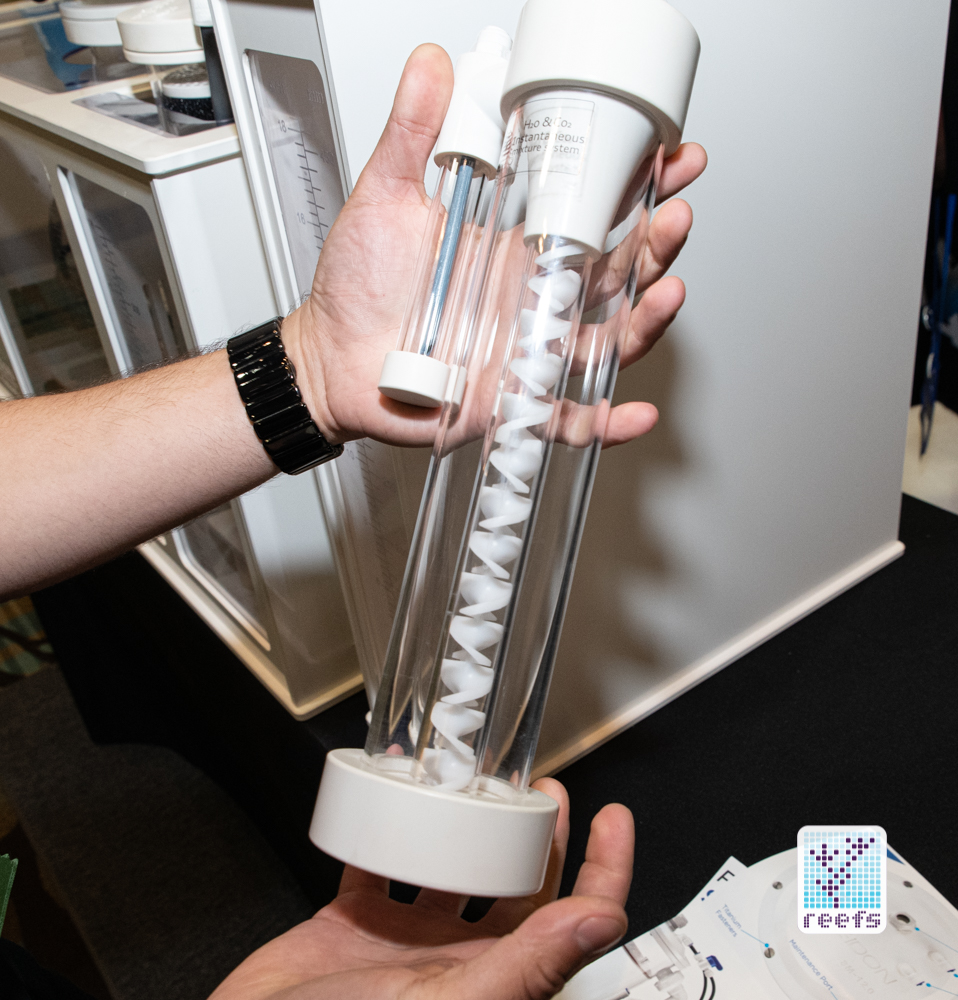 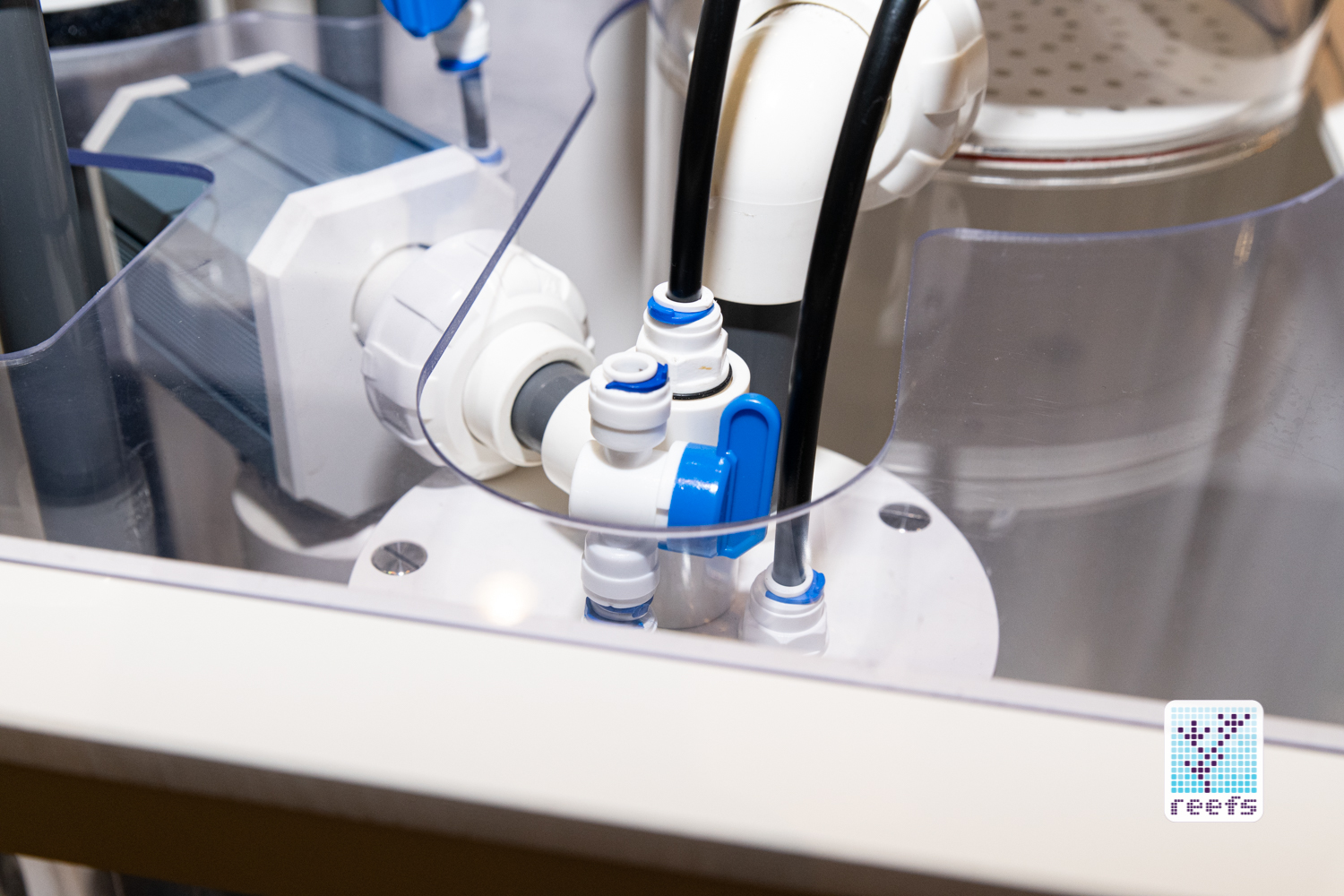 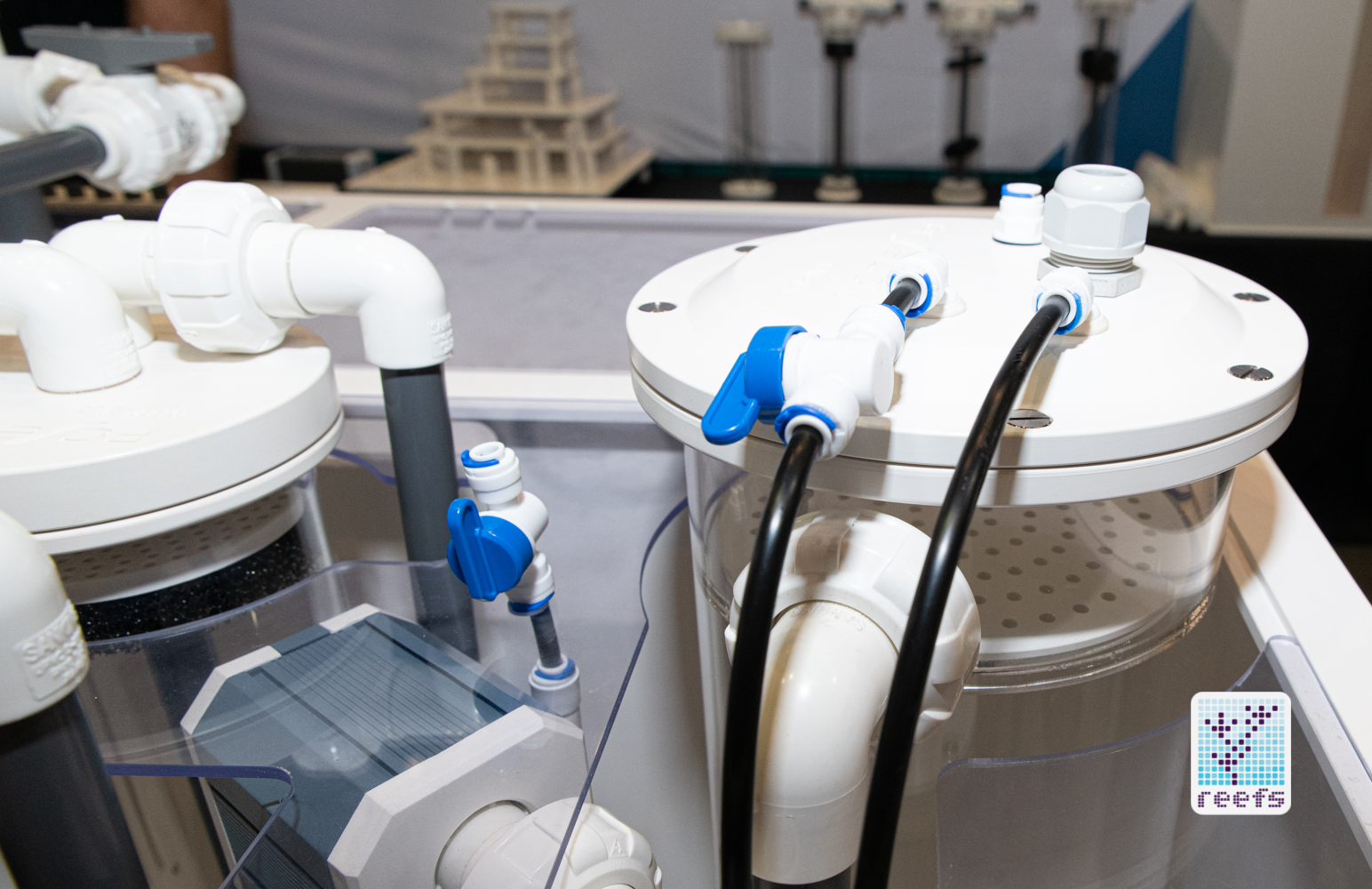 Poseidon Flow Technologies had some seriously interesting equipment and it’s worth checking out their website https://poseidonflow.com/ for more info. 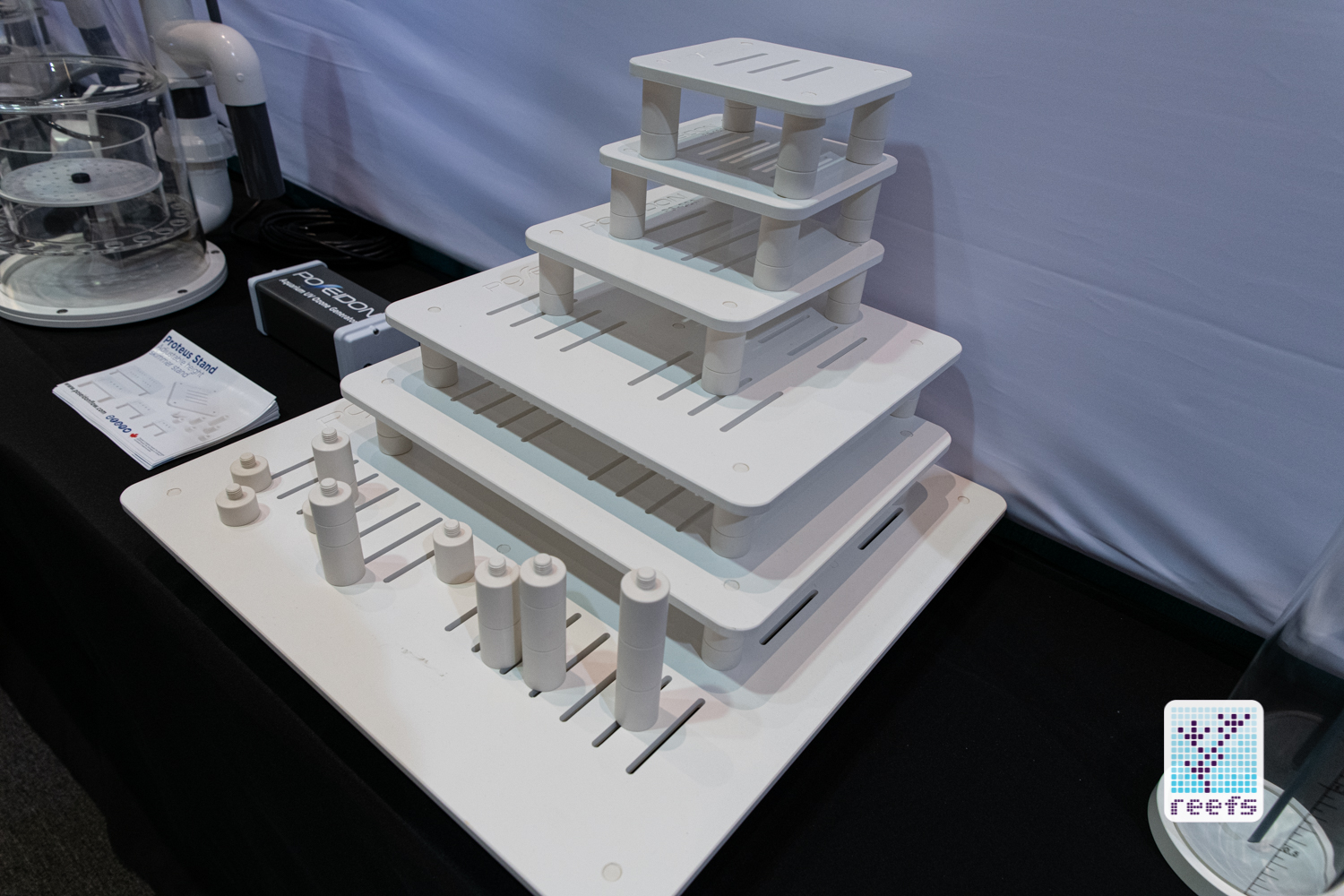 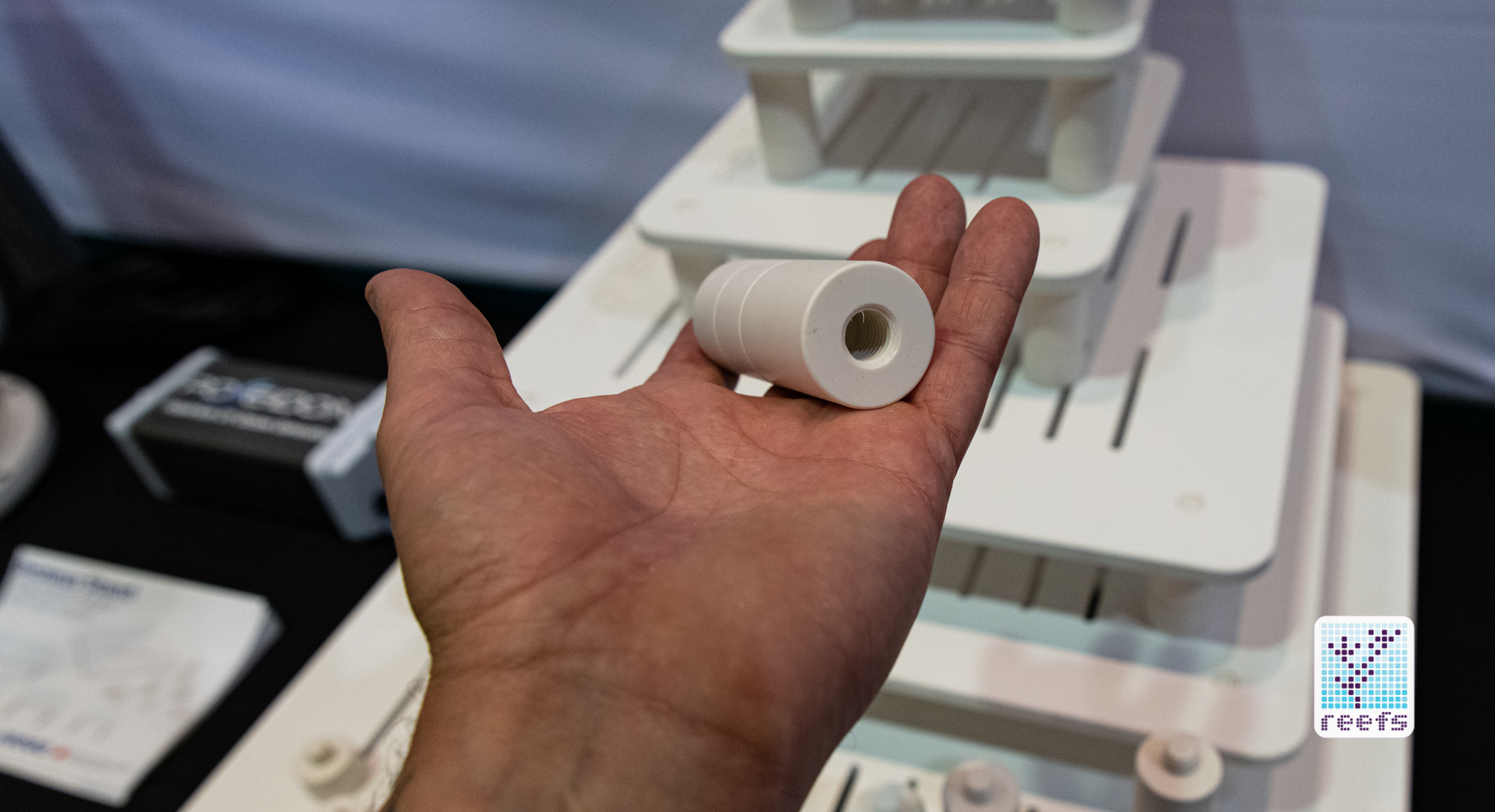 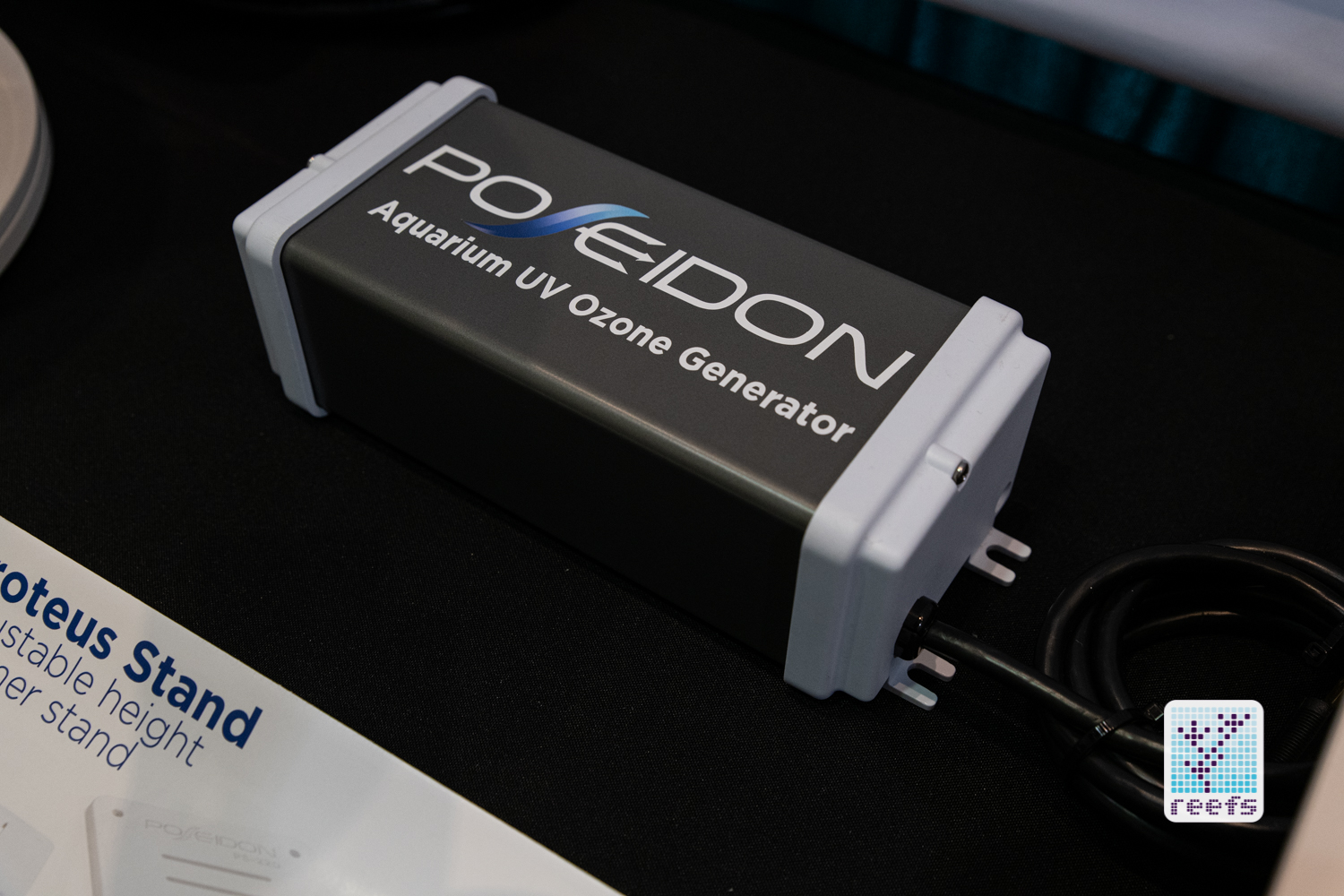 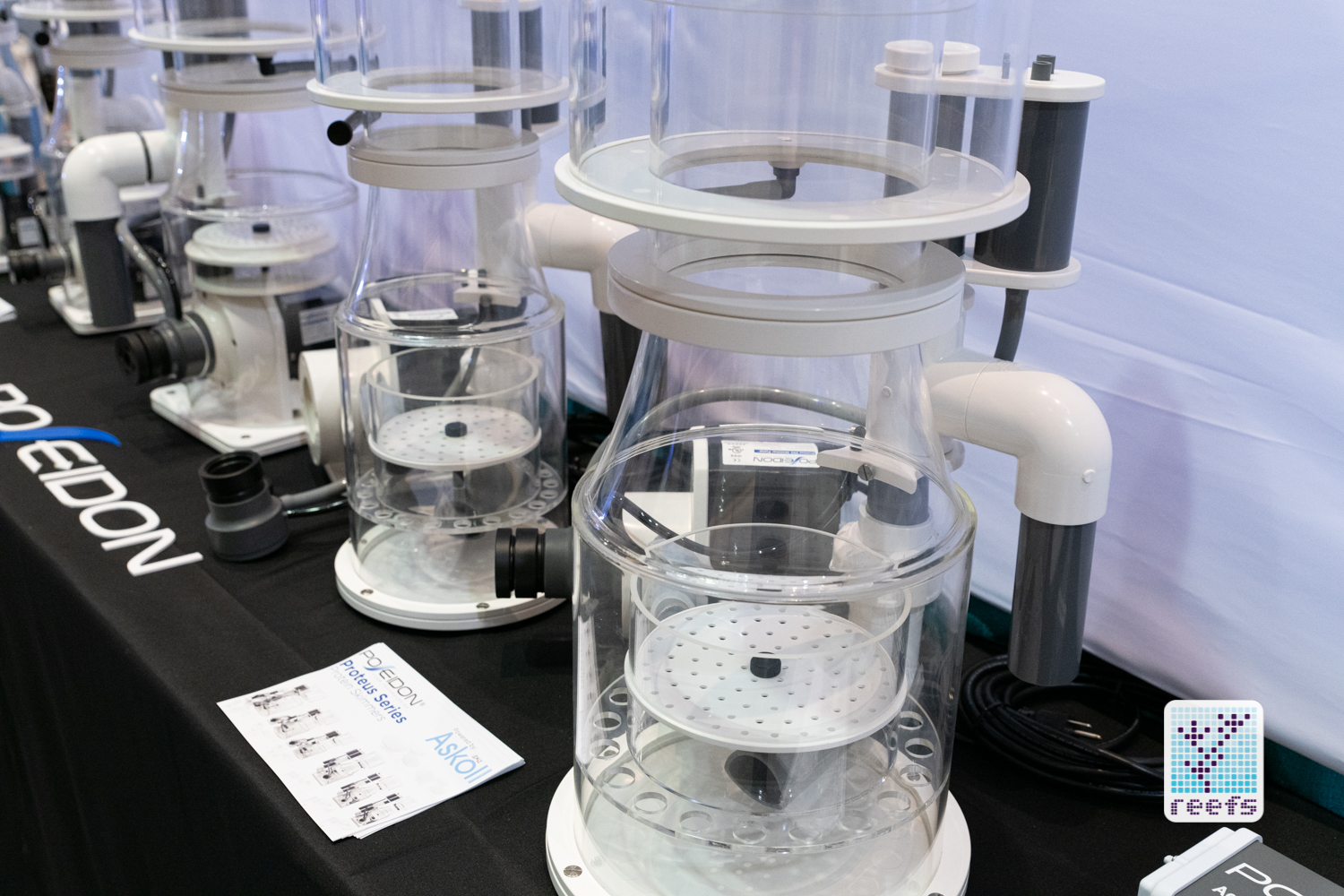 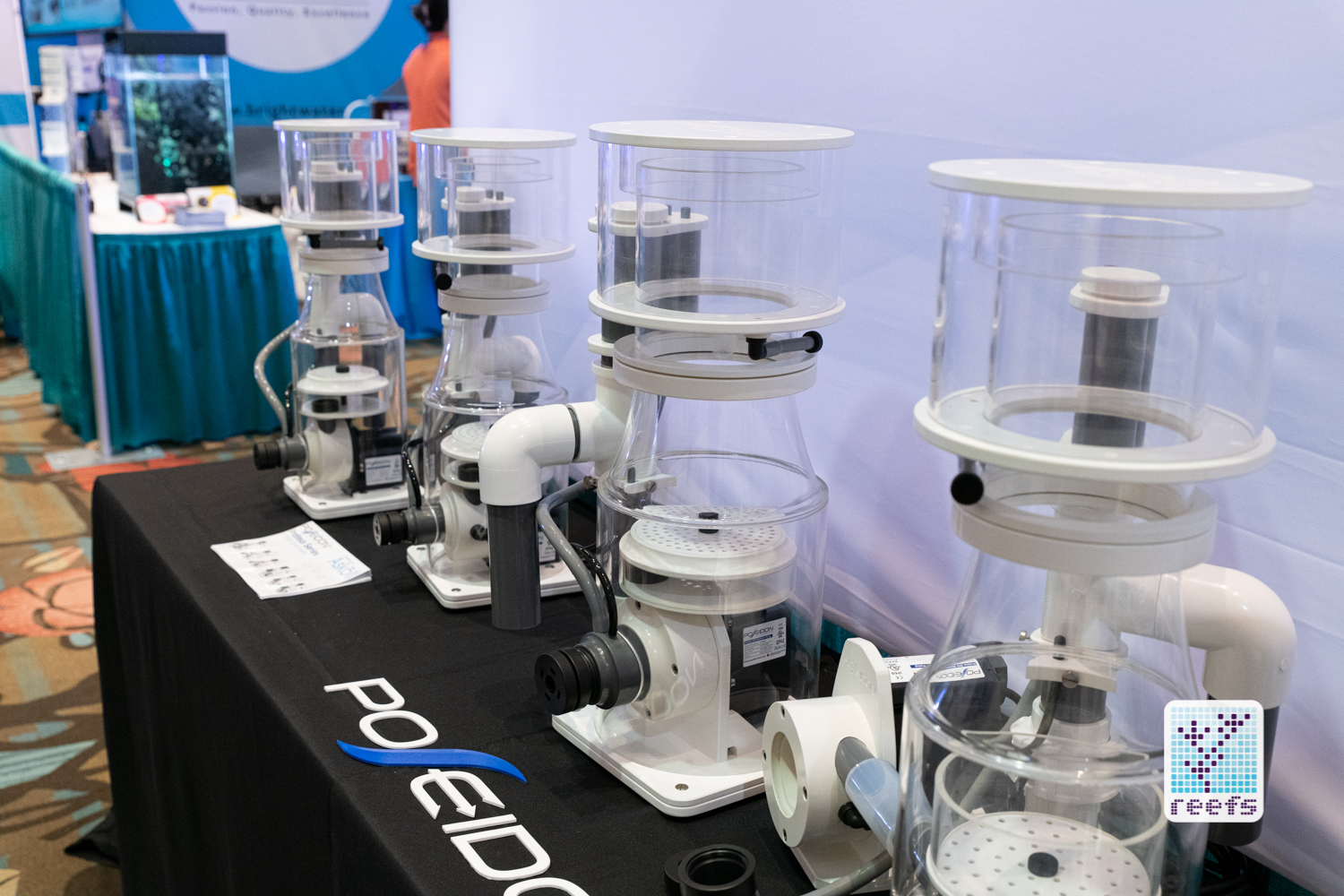 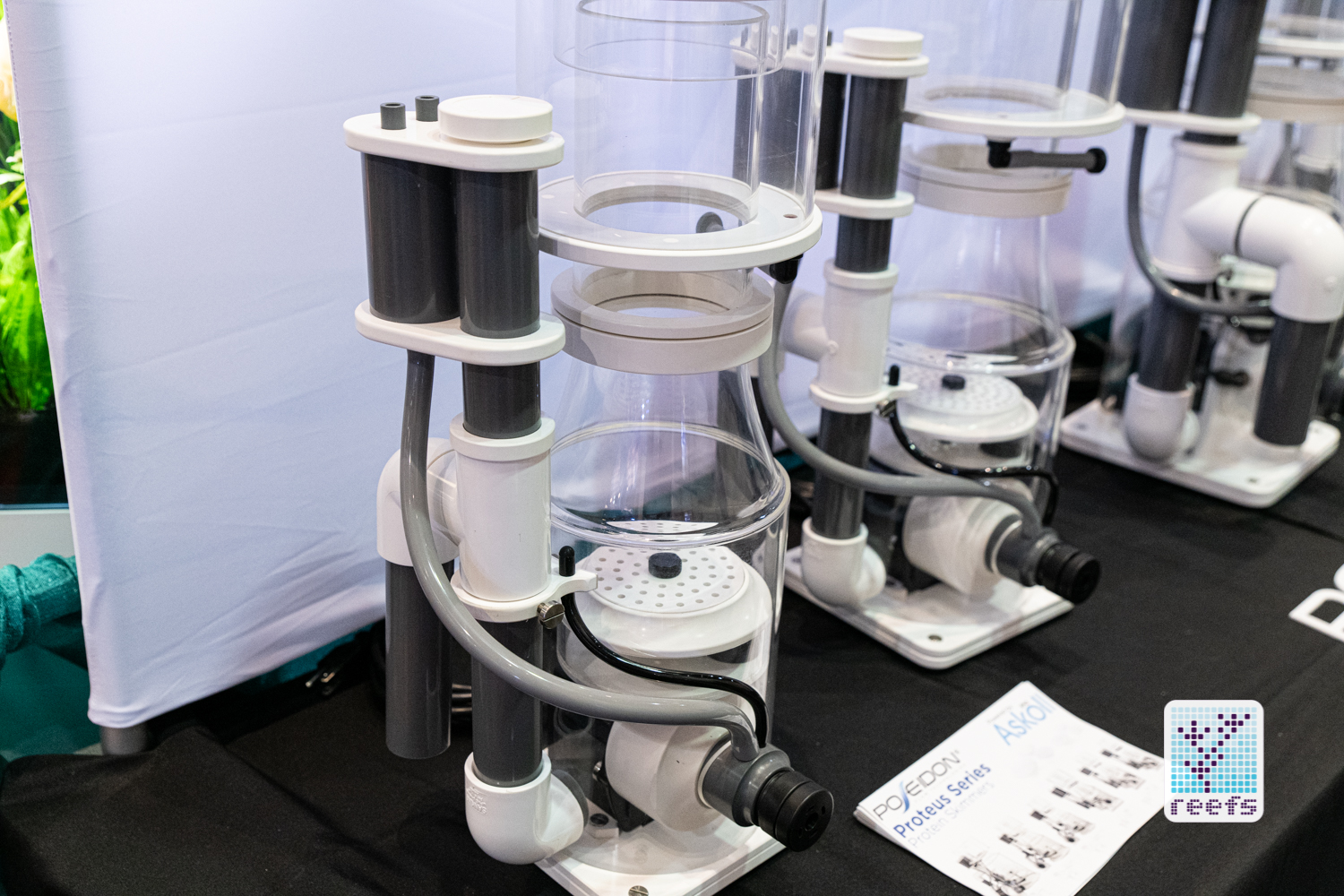 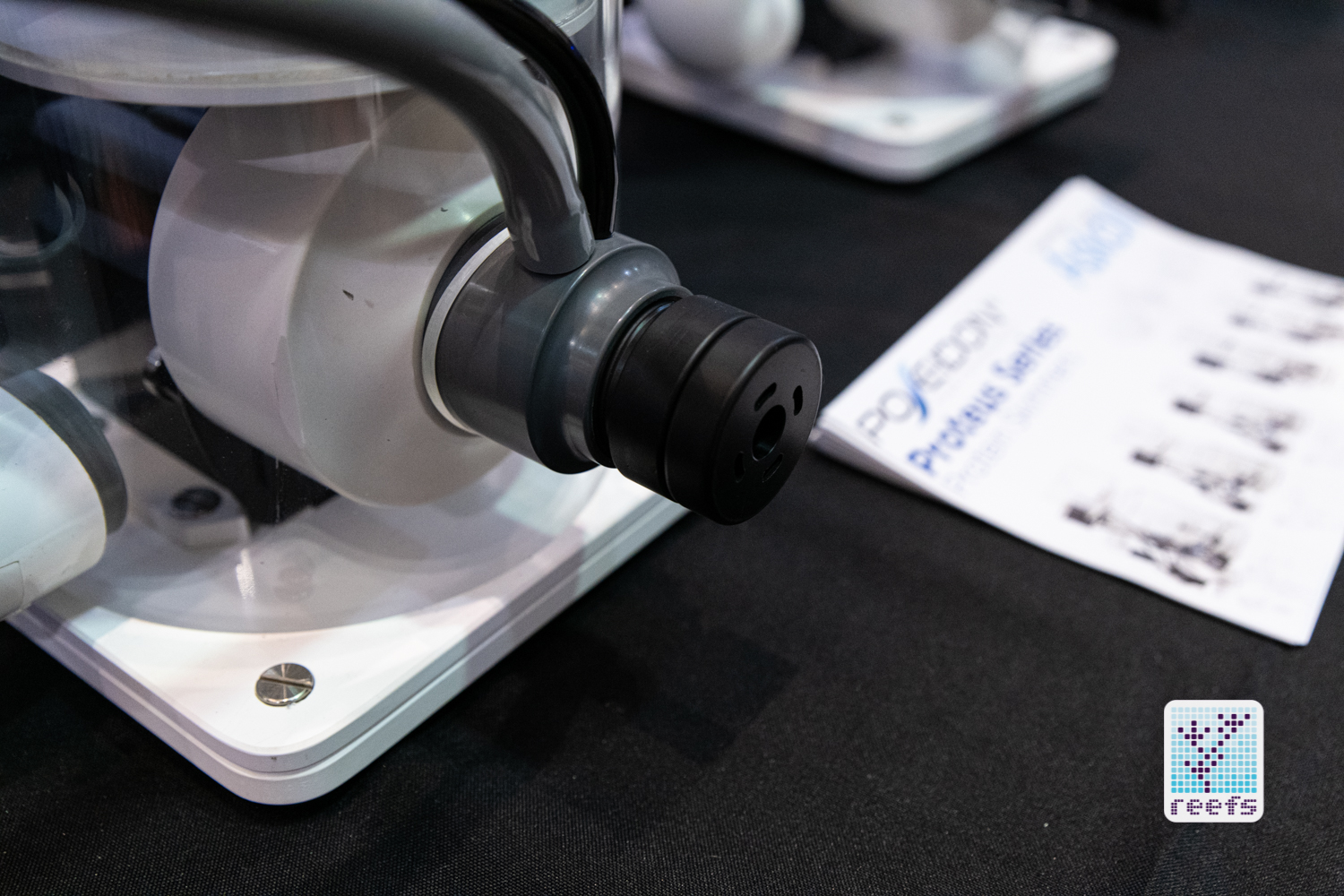 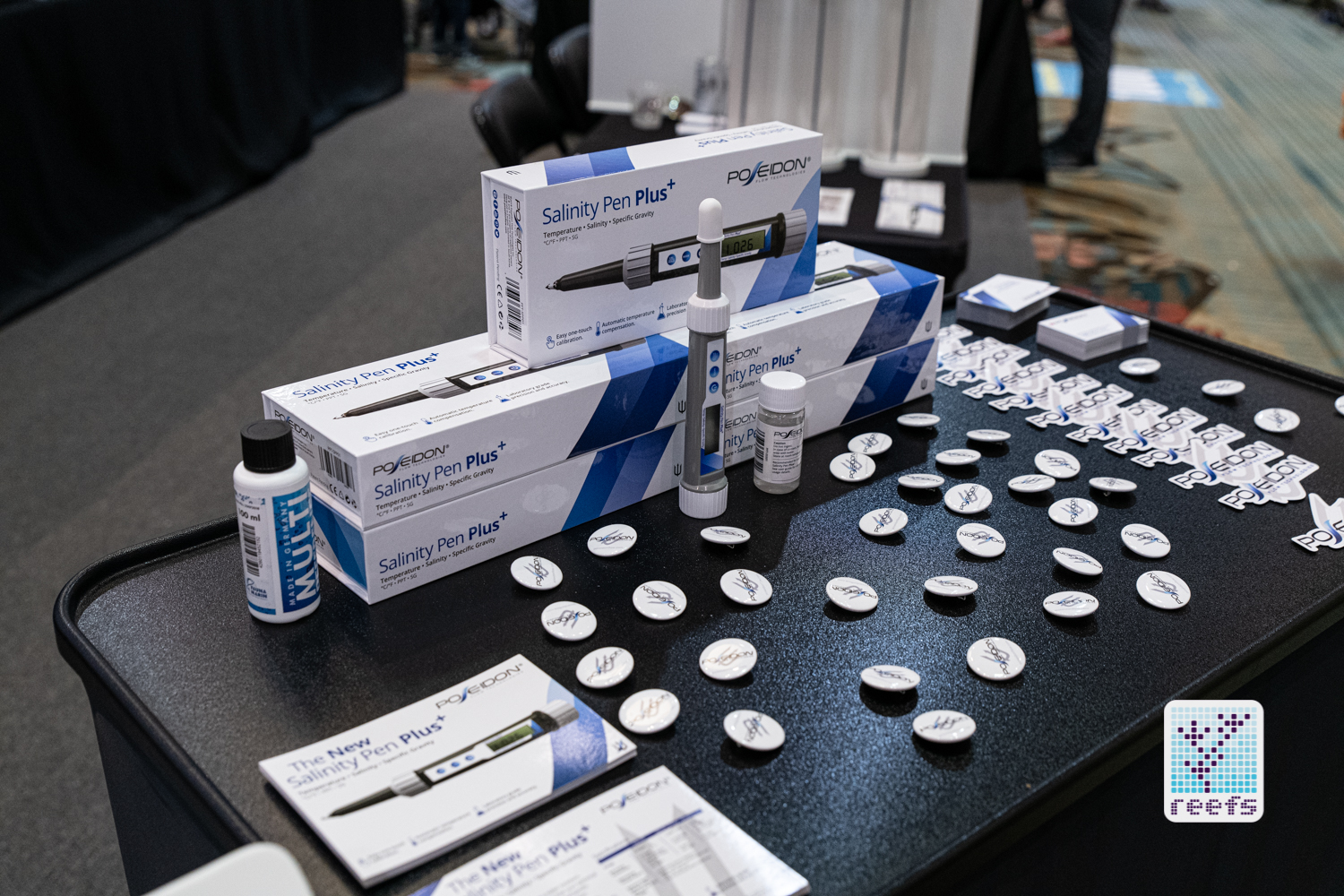