An Overview of Rotifaria: Part II

Rotifers have for many millions of years played key ecological roles in a wide range of natural habitats, and have in much more recent days become an indispensable live food organism for countless fisheries. So, a working knowledge of the biology of the Rotatoria is of considerable worth to any serious aquarist not only for the reason that they are important members of the biological communities we attempt to replicate, but also because they are an increasingly valuable resource for ornamental aquaculturists.

Arguably, developing an appreciation for these fascinating creatures is worthwhile, in the very least, on account of their remarkable level of diversity and adaptability. Yet, despite the fact that rotifers are so abundant and so pervasive, surprisingly few aquarists know much about them at all; even fewer are familiar with any besides a handful of species.

This piece discusses the ecology, development and reproduction of the Rotatoria. A previous piece discussed rotifer classification, etymology, and morphology. A final piece will discuss rotifer culture. In all pieces, an emphasis is placed on certain members of the genus Brachionus, owing to their present importance in the aquarium industry. 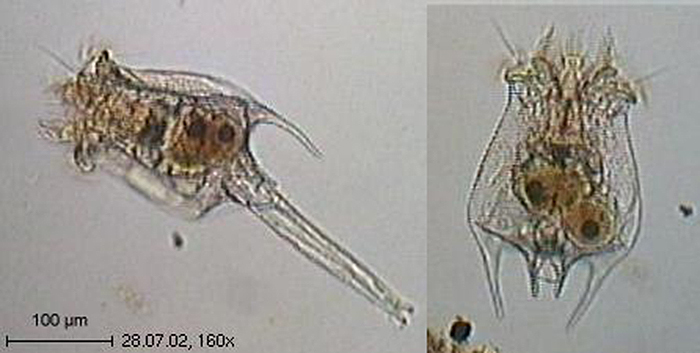 While much is known about the biology of rotifers in laboratory cultures, ecologists have largely ignored these animals in their natural environments. The roughly 1,800 described species of rotifers are found worldwide in a variety of ecotypes. The majority of rotifer species (~90%) occurs in freshwater habitats (Omori and Ikeda 1984; Horne and Goldman 1994; Hickman, Roberts and Larson 1995; Ohs, Cassiano and Rhodes, 2010). The zooplankton in lakes and rivers is often dominated (>50% zooplankton biomass at certain times of the year) by rotifera (Horne and Goldman 1994; Hoff and Snell 2008). While there is an appreciable number of brackish rotifer species, there are only a few strictly marine species (Omori and Ikeda 1984; Hickman, Roberts and Larson 1995; Dhert 1996). Most of the species found in saltwater inhabit inshore environments such as estuaries. Indeed, many rotifers found in intertidal habitats are thought to be freshwater species that simply can tolerate exposure to seawater (Hickman, Roberts and Larson 1995; Hoff and Snell 2008). Some rotifers are semi-terrestrial (e.g., living in pockets of moisture trapped on mosses), and some are epizoic (i.e., live on the body of another organism) (Hickman, Roberts and Larson 1995). Many species (particularly those that dwell in vernal ponds or on mosses) are quite capable of withstanding desiccation. While in a dehydrated state, these rotifers may survive extreme shifts in temperature. They are quickly reactivated with the return of suitable aquatic conditions. However, true encystment is known to occur in just a few rotifer species (Hickman, Roberts and Larson 1995). 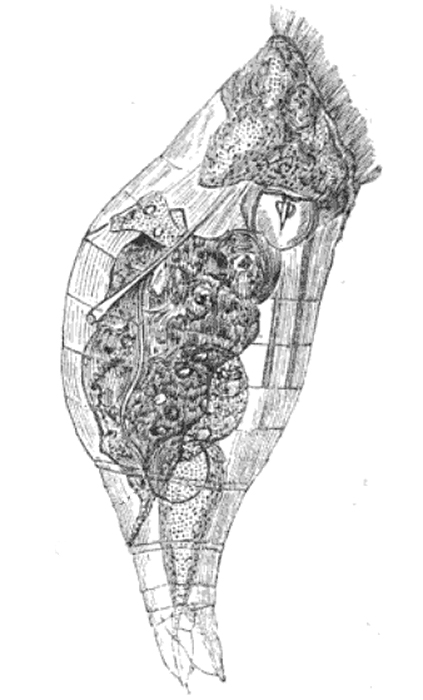 Most rotifer species are benthic. Some of these species spend a good part of their lives as meiofauna on beaches, inhabiting films of water between sand grains. Many are bacterivorous and detritivorous (e.g., Embata) (Hickman, Roberts and Larson 1995). Some rotifers are primarily pelagic, being found mainly at the surfaces of ponds, lakes and estuaries. Pelagic species commonly exhibit variations in body forms that result from environmental fluctuation (or cyclomorphosis). Most of these species are herbivorous (e.g., Keratella), though a few are predacious (e.g.,Asplanchna) (Horne and Goldman 1994; Hickman, Roberts and Larson 1995; Hoff and Snell 2008).

Rotifers contribute significantly to nutrient recycling. They are especially active in the spring with increasing temperatures and photoperiods. Rotifers reach their highest fecundities just after the spring and early summer phytoplankton blooms have peaked. Much like protozoans, rotifers outpace copepods with respect to spring population growth as a result of shorter periods of juvenile development and maturation. By late spring, rotifer biomass within a given ecosystem can increase at a rate as high as a few percent per day. By early summer, due to constant grazing by rotifers and other phytoplanktivores, lake/coastal waters can become nearly transparent. Throughout this period (referred to as the clearwater phase), herbivorous rotifer fecundities decline sharply; moreover, herbivorous rotifer populations drop as they are (1) supplanted by competitors that are adapted to consume summer phytoplankton species and (2) consumed by predators such asAsplanchna spp. Many rotifer species (especially pelagic forms) are far less numerous during the winter months. Their resting eggs, however, have by then been deposited into the sediments where they lie in a state of dormancy (or diapause) until the onset of favorable, springtime conditions (Horne and Goldman 1994). While in diapause, they can be dispersed by wind, birds or other carriers (Hickman, Roberts and Larson 1995). 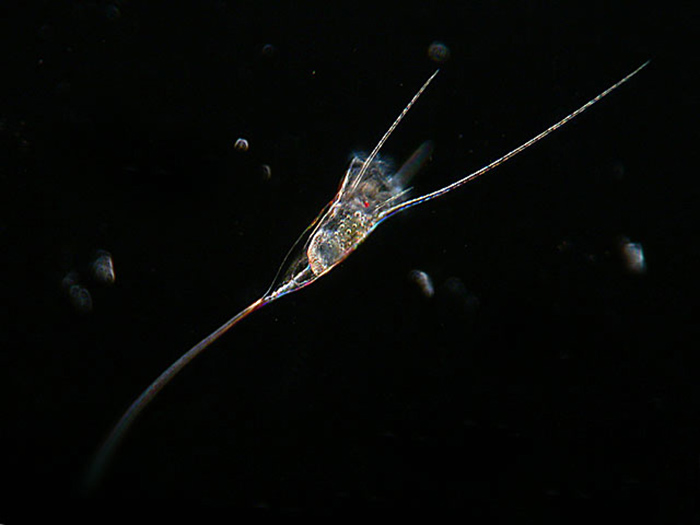 Populations of rotifer Kellicottia longispina (shown here) grow in the presence of the opossum shrimp Mysis relicta, which preys on the rotifer’s main competitors. Photo by NOAA.

Reproductive strategies vary greatly amongst the Rotatoria. Rotifers are dioecious, though females tend to be larger than males. Generally, sex determination is established by number of chromosome sets, with females being diploid (2N) and males being haploid (N) (Horne and Goldman 1994; Hickman, Roberts and Larson 1995).

Only the small, specialized Class Seisonidea reproduces exclusively by sexual means. That is, all female seisonid rotifers produce haploid eggs that must be fertilized by a male and subsequently develop into either males or females.

Conversely, members of Class Bdelloidea reproduce exclusively by uniparent (or parthenogenetic) means. That is, all female bdelloid rotifers produce diploid eggs that hatch into diploid females without the ovum having to be fertilized by a male; indeed, male bdelloid rotifers apparently do not exist (Horne and Goldman 1994; Hickman, Roberts and Larson 1995). 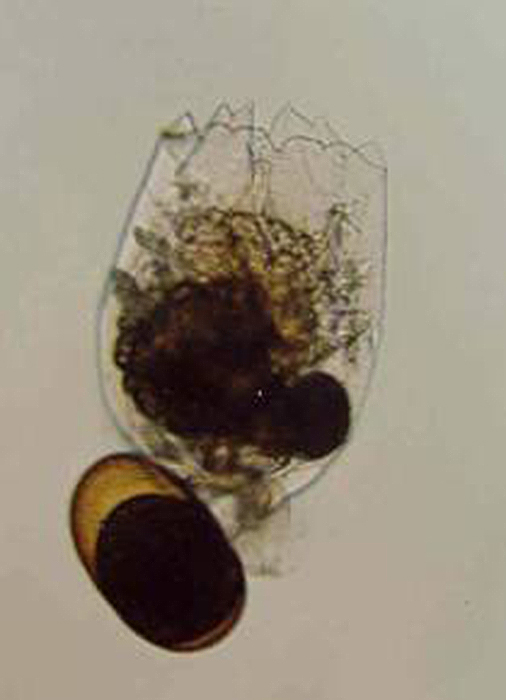 Members of Class Monogononta (e.g., Brachionus spp.) are capable of both parthenogenetic (or amictic) and sexual (or mictic) reproduction. The typical monogonont life history involves (1) parthenogenesis when prime environmental conditions (e.g., high phytoplankton densities and low interspecific competition) promote rapid growth, and (2) sexual reproduction when adverse environmental conditions (e.g., extreme changes in temperature, photoperiod or population density) bring about a resting period (Omori and Ikeda 1984; Horne and Goldman 1994). By and large, parthenogenetic females emerge in the early spring from resting eggs. These diploid females produce brownish, soft-shelled, diploid amictic eggs that develop into yet more diploid females. Throughout the spring and summer – provided that favorable conditions persist – many generations of daughter clones are produced in this manner. Subsequently, in anticipation of unfavorable fall and winter conditions, some amictic eggs develop into diploid mictic females that in turn produce small haploid eggs by means of normal meiosis. These haploid eggs either (1) are fertilized by males or (2) eventually develop into males (Omori and Ikeda 1984; Hickman, Roberts and Larson 1995; Hoff and Snell 2008). 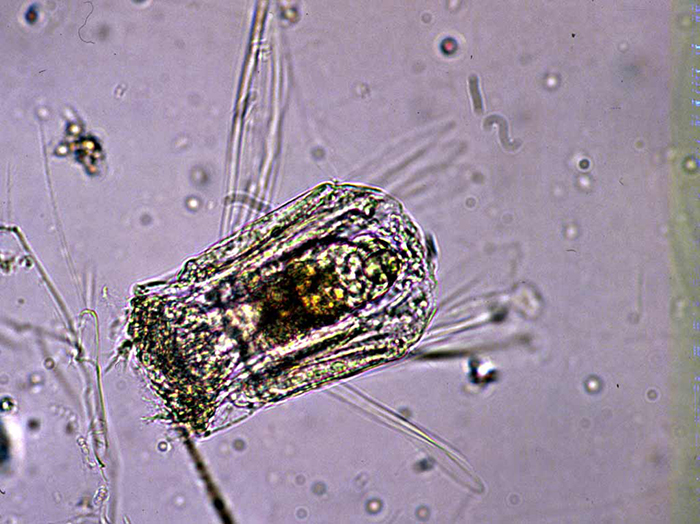 Polyarthra spp. rotifers are often used as test subjects in ecology studies by the EPA. Photo by EPA.

Males are born with adult features and are sexually mature almost immediately after hatching. Male rotifers apply all available energy towards the search for unfertilized haploid eggs. Males are comparatively small, degenerate, fast swimming, non-feeding and short-lived. The male reproductive system is comprised of a single sacciform testis with a ciliated sperm duct that is connected to one or more pairs of prostatic glands. As males usually lack a cloaca, the sperm duct often leads to a genital pore. The posterior end of the sperm duct itself is specialized to function as a *****. Copulation is usually accomplished by hypodermic impregnation, whereby the copulatory organ pierces some part of body wall and directly releases sperm into the pseudocoelum. There may be two types of sperm present–the more typical rounded type with an undulant tail that is ostensibly for mainly cloacal insemination, and a second rod-shaped type that is likely specialized for penetrating the cuticle in the case of hypodermic impregnation (Hickman, Roberts and Larson 1995; Campbell and Reece 2002; Hoff and Snell 2008; Dhert 1996). 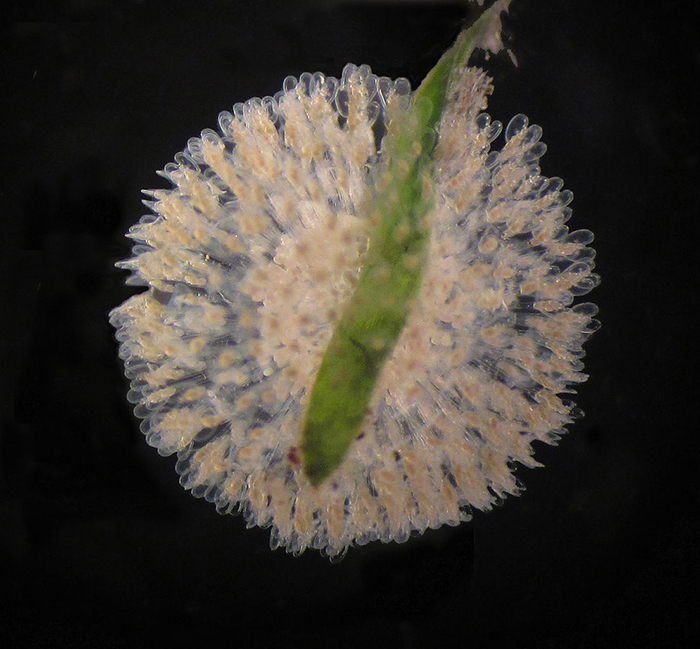 Fertilized eggs develop a thick, tough, reddish shell. Except for the slight difference in color, they are superficially quite similar to amictic eggs. These encysted embryos require at least a couple of weeks to hatch. They are, however, capable of lying dormant in this arrested metabolic state for several years (Hickman, Roberts and Larson 1995; Hoff and Snell 2008). Perhaps most importantly, mictic egg production increases genetic variation within a population, allowing it to survive a broader range of possible new conditions in the following season (Horne and Goldman 1994).

The monogonont life cycle is characterized by short development times and high fecundities. While in parthenogenetic reproductive mode, brachionid rotifers exhibit some of the highest rates of population growth recorded for animals. In natural populations, rates of birth (b) and death (d) are influenced by seasonal physical/chemical fluctuation, food quantity/quality and pressure from competition/predation. Together, birth and death rates determine instantaneous rates of population growth (r), given by the general formula r=b-d (Horne and Goldman 1994). Brachionid rotifers are capable of a productivity as high as r=0.7-1.4 individuals/female/day (Hoff and Snell 2008; Dhert 1996). Females mature sexually at approximately 18 hours of age, with reproductive capacity peaking around days 1-4. Eggs may be extruded every 4-6 hours, with each hatching in as little as 12 hours. Under suitable conditions, a single female can produce 20-25 daughters over the course of its life. Individuals have a rather short life span; at 25ºC, female Brachionus plicatilis live for about 6-8 days and males live only for about two days (Hoff and Snell 2008). 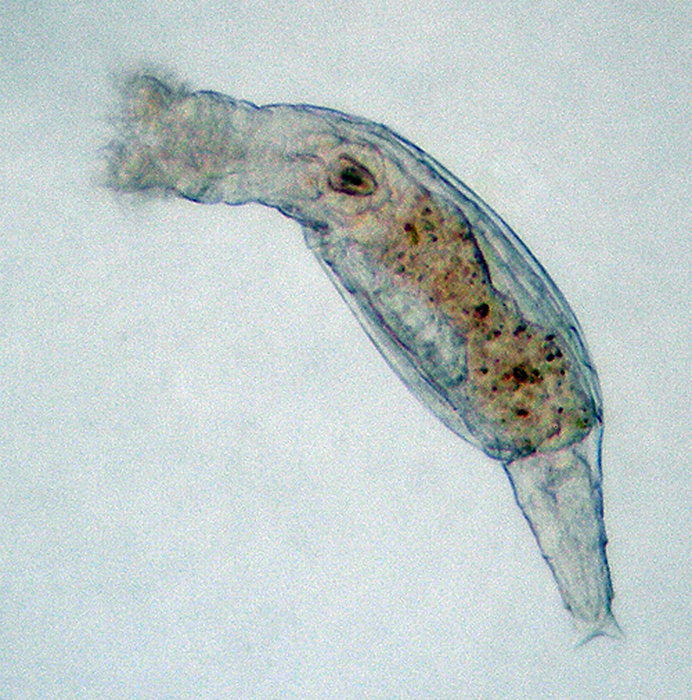 Habrotrocha rosa is only found in the fluid within a single species of pitcher plant. Photo by Ryan D. Kitko.

Due to major differences in their respective environments, cultured populations of rotifers may behave very differently than their wild counterparts. Population growth can be controlled by manipulating culture conditions. Aquarists thusly may adopt culture techniques that suit their own needs and purposes (i.e., maximize efficiency, stability and productivity). A more detailed treatment of rotifer culture will be presented in the following piece.