Zooplankton feeding is an important strategy for corals to acquire nutrients from the water column. Scientific studies have shown that scleractinian corals are capable of capturing and consuming significant amounts of zooplankton, including copepods and Artemia nauplii. Most research however has focused on quantifying prey ingestion. External feeding on zooplankton may also be important, and was first documented in 1902. New research by marine biologists from Wageningen University has shown that extracoelenteric feeding on zooplankton can far exceed internal feeding in terms of prey captured and nutrients acquired. 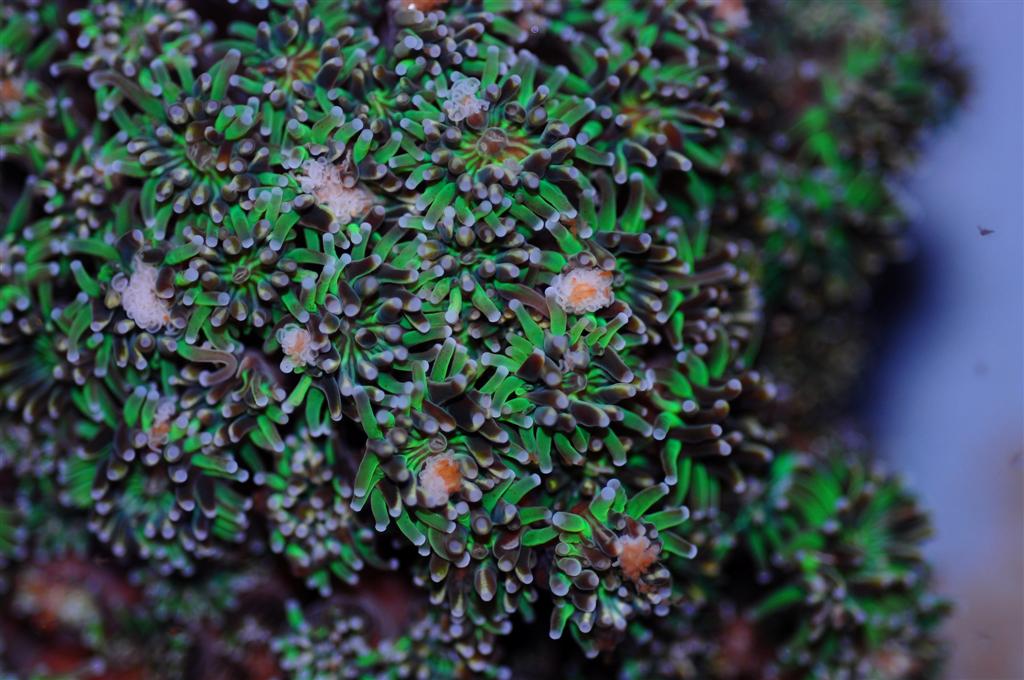 Internal and extracoelenteric feeding on zooplankton provides scleractinian corals with important nutrients, such as carbohydrates, proteins and lipids. These nutrients provide important elements for building new tissue, including nitrogen and phosphorus. Although zooxanthellae are able to translocate vital nutrients to their coral host, including glucose, glycerol and amino acids, research has shown that zooplankton supplementation can greatly enhance coral growth. In the wild, corals also consume small quantities of zooplankton, especially during and after dusk when crustaceans such as copepods swarm throughout the water column.

Scleractinian corals employ intricate mechanisms of zooplankton capture, which encompass tentacle movement combined with cnidocyte firing and mucociliary feeding to ingest immobilized prey. It has long been known that scleractinian corals may also digest prey externally, by expulsion of mesenterial filaments as a response to prey detection. Mesenterial filaments are outgrowths that extend from the mesenteries, invaginations of the polyp gastroderm that contain muscle, digestive and absorptive cells, and the gonads.  Mesenterial filaments are heavily packed with cells that secrete digestive enzymes, and filaments can be extended from the polyp through the mouth or temporary openings in the epithelium. As, in this case, digestion occurs outside of the polyp coelenteron, this process has been coined extracoelenteric feeding. 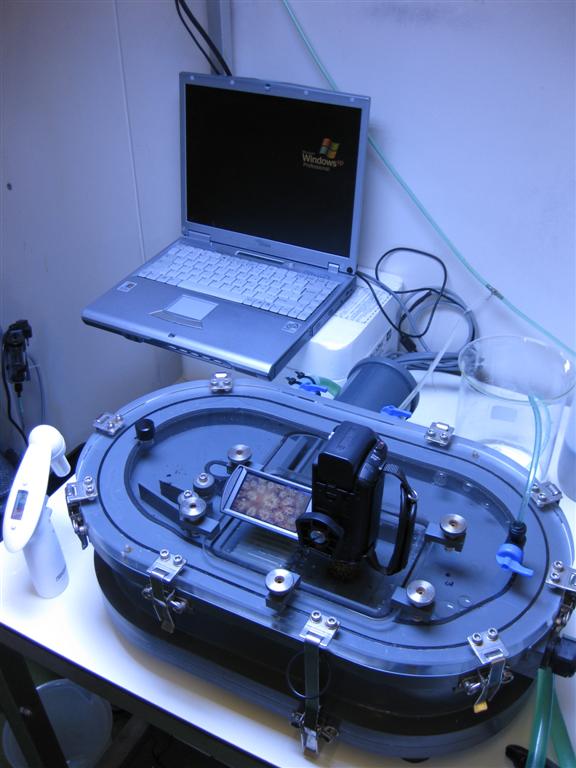 A setup for video analysis of coral feeding processes. A flow cell contains a coral colony or single polyp, which is monitored with an HD camera. Water flow rate, temperature, light intensity, oxygen and plankton concentration can be manipulated, allowing for a wide variation of experiments. Image: Tim Wijgerde.

In the past, marine biologists have quantified plankton capture and ingestion by coral polyps using histological techniques. By fixation and dissection of coral polyps, individual prey items can be visualized under a microscope. By counting and scoring prey numbers in a random selection of polyps, scientists can obtain a good estimate of plankton grazing by corals. Disadvantages of this approach are that extracoelenteric feeding processes are not taken into account, and that some prey items rapidly degrade before fixation. An alternative strategy is to use prey clearance rate. By exposing a coral in a known volume of water to a specific zooplankton concentration, prey capture can be determined by taking regular water samples over time. By counting the number of prey items in the samples using a microscope, the decrease in prey concentration over time can be monitored. By multiplying the decrease in prey concentration with the net volume of water the coral was incubated in, the total amount of captured prey can be calculated. This method works well and takes both intra- and extracoelenteric plankton feeding into account, however it fails to reveal the dynamics of prey capture, (extracoelenteric) digestion and release, obscuring realistic estimates of nutrient input from zooplankton. This is because (partially) digested and subsequently released particles are re-counted in the water column, which are therefore not considered as having been captured and digested. A third, more advanced approach is to employ video analysis. This method allows biologists to monitor coral behavior over time, including feeding.

Recently, biologists from Wageningen University (The Netherlands) set out to record the feeding process of a scleractinian coral in full detail using video analysis, and came up with exciting results.

For their study, the Dutch biologists used the Indo-Pacific Oculinid Galaxea fascicularis (Linnaeus 1767). This species is hardy and has relatively large polyps that can be visualized easily with a digital camera. Single coral polyps were used to monitor feeding behavior. Artemia nauplii were used as a food source at a concentration of 10,000 individuals per liter of water, which were injected into the flow cell containing the coral. A high concentration of zooplankton ensured that prey capture could be recorded easily, and also allowed the scientists to determine how much plankton a coral polyp was able to consume under virtually non-limiting concentrations. Feeding behavior was monitored for six hours, and the experiment was conducted three times. After several runs, the video data was transferred to a computer. Eighteen hours of video were meticulously analyzed, during which prey capture, release and prey aggregate formation on the polyp surface were scored. The obtained results were striking. 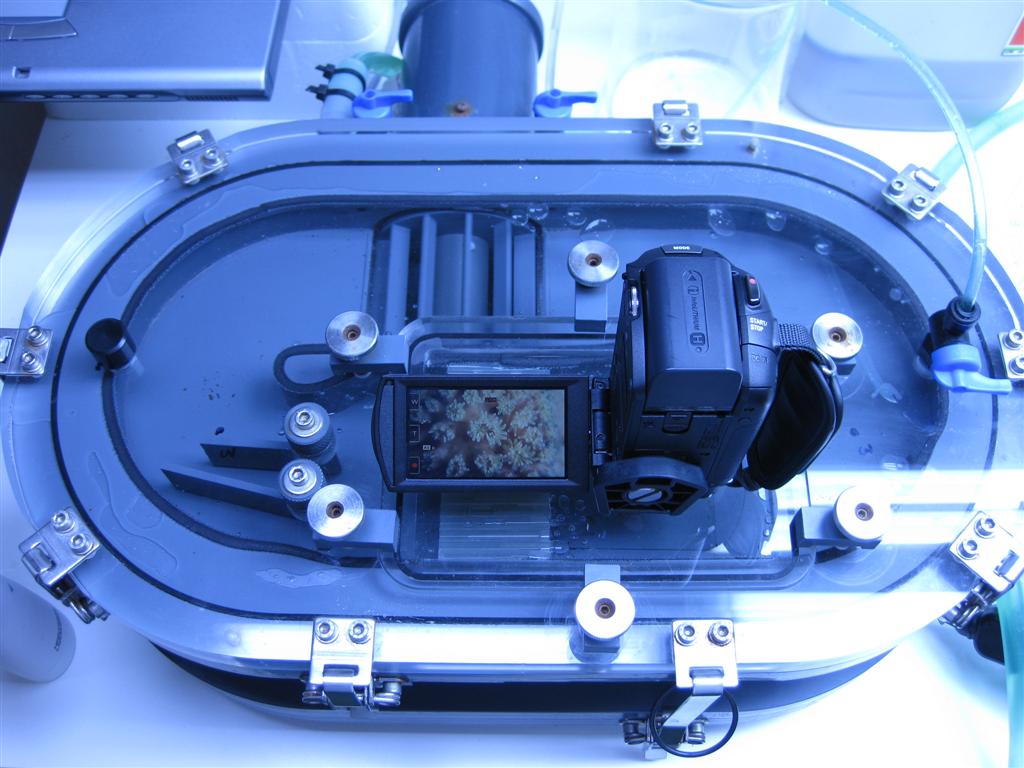 On average, a single G. fascicularis polyp was able to capture 558 and release 383 nauplii over a six hour interval. Interestingly, 98.6 percent of all prey captured was not ingested. Instead, prey items were clustered in aggregates that were digested externally by mesenterial filaments. Over the entire six hour period, prey capture and release rates decreased, indicating satiation of coral polyps. After 300 minutes, capture and release rates became similar, stabilizing aggregate sizes at 176 nauplii per polyp.

These findings were quite astonishing, as until now, corals were thought to digest the bulk of their captured prey internally. The next question was how much nutrients could actually be taken up from extracoelenteric digestion of nauplii. To address this issue, a new series of experiments was carried out for which whole Galaxea colonies were used. 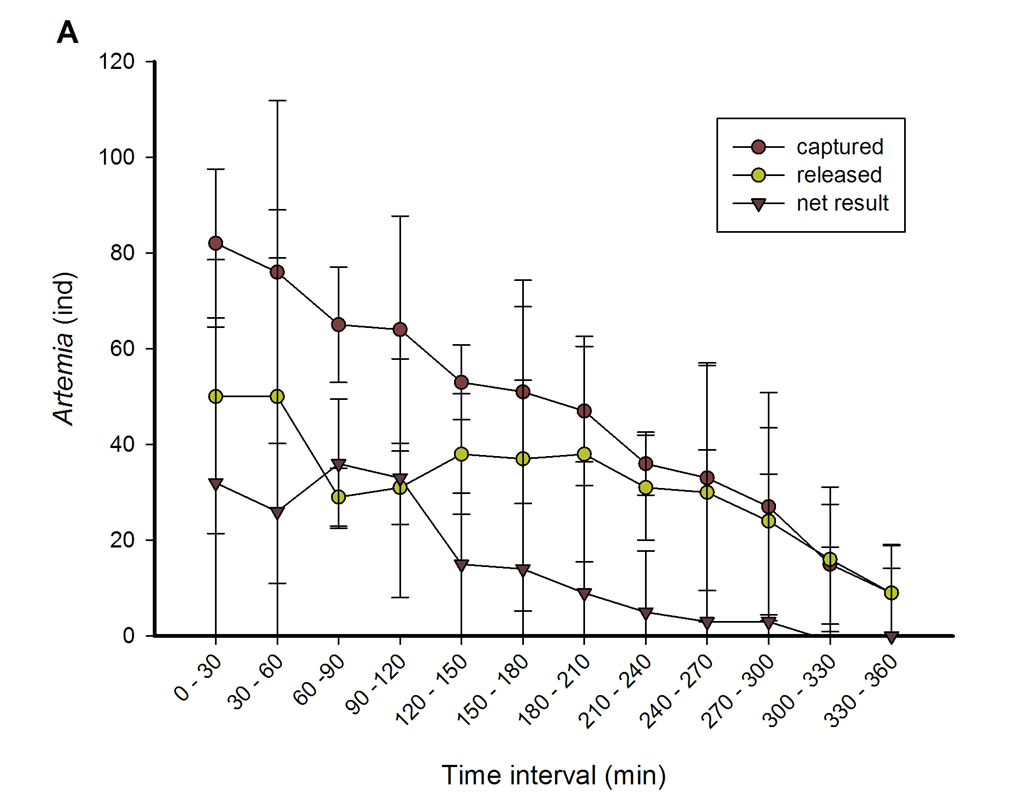 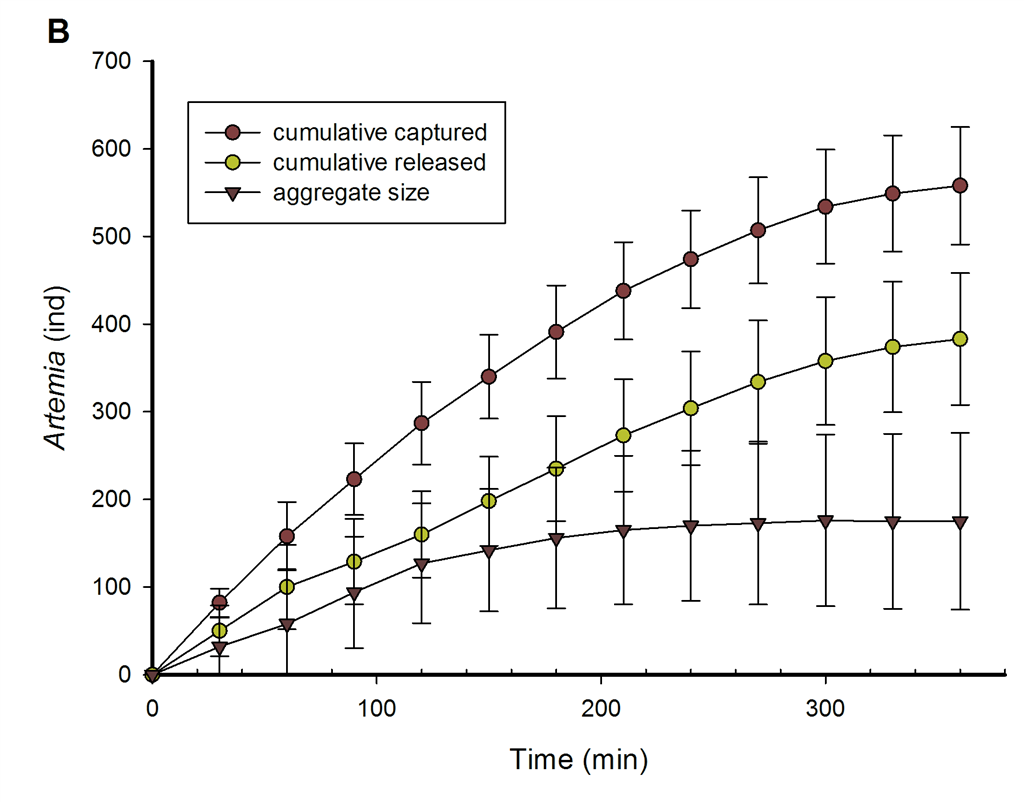 To estimate the role of extracoelenteric zooplankton feeding in the diet of G. fascicularis, carbon, nitrogen and phosphorus contents of Artemia nauplii were analyzed after various treatments. Nauplii were treated in three different ways: they were either immediately frozen after hatching, incubated at 26 degrees Celsius as a control or fed to G. fascicularis colonies. Negative controls and fed nauplii were incubated for six hours, and the experiment was conducted six times. Captured nauplii were removed from coral polyps with a Pasteur’s pipette. Controls were used for this study as Artemia nauplii may decrease their nutrient content due to their own metabolism—live Artemia nauplii continue to consume their yolk sacs during experiments. 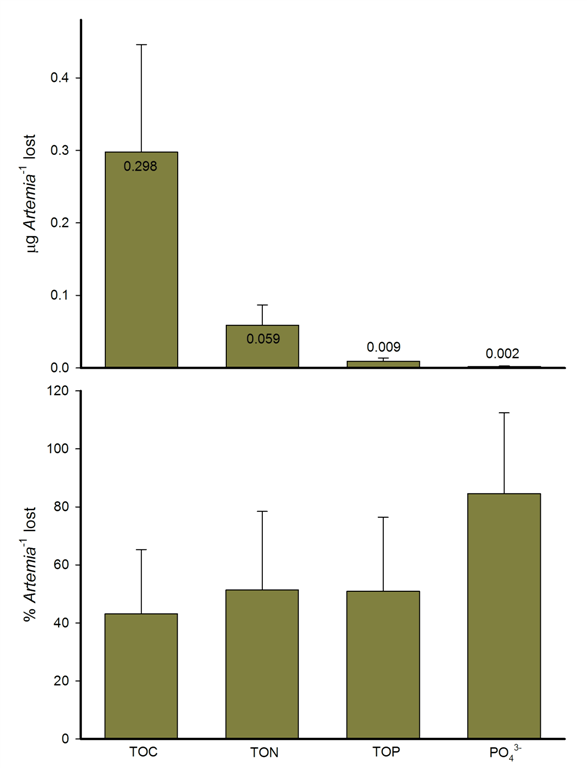 After each experiment, collected nauplii were washed in deionized water and nauplii numbers were scored under a microscope. To determine the carbon, nitrogen and phosphorus content of the nauplii, two different methods were used: high temperature catalytic oxidation for (in)organic carbon and continuous flow analysis for (in)organic nitrogen and phosphorus. By correcting all data with negative controls, the amount of lost nutrients—resulting from the coral’s digestive enzymes—per prey item were calculated.

The obtained results showed that mesenterial filaments, expelled by Galaxea polyps through the polyp epithelium, were indeed able to break down Artemia nauplii. On average, about 44 percent of the available organic carbon was lost after a six hour incubation with G. fascicularis colonies, in contrast to the negative controls. For nitrogen and phosphorous, a loss of approximately 51 percent was found. Interestingly, about 84 percent of all inorganic phosphorus was lost, which might have been absorbed by the coral’s symbiotic algae, or lost due to diffusion into the surrounding water.

By multiplying the amount of nutrients lost per prey item with the number of prey captured by Galaxea polyps, the marine biologists were able to estimate the daily nutrient input from zooplankton feeding, hereby taking extracoelenteric feeding processes into account. The assumption was made that nutrients lost were absorbed by the gastrodermal cells lining the mesenterial filaments.

The final results, obtained by combining video data with nutrient analysis of Artemia nauplii, were quite surprising. From their calculations, the scientists found that when taking extracoelenteric zooplankton feeding into account, daily nutrient inputs from feeding are much higher—about twenty times higher—than previously estimated.

The take home message from this research is that corals are voracious predators, perfectly adapted to capturing unsuspecting prey from the water column with their cnidocyte-bearing tentacles.