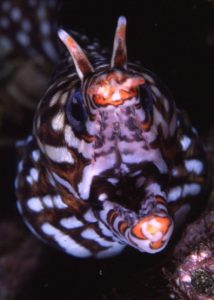 In my mind, the dragon moray ( Enchelycore pardalis ) is the most beautiful and fearsome of all the muraenids. With its crooked jaws, its always visible, needle-sharp teeth, the “horn” over each eye, and the tubular nostrils, it is truly as frightening to look at as its mythical namesake! It is also one of the most colorful of all the morays. The body and head can be chocolate to light brown, with varying degrees of orange. (The truly amazing individuals have bright orange on the anterior portion of the body and head.) There are white spots and bands on the body, head and jaws. The white mouth is tattooed with a series of dark lines.

It has been suggested that those dragon morays from Japan are the most beautiful of all. But the coloration of individuals varies greatly within populations. Some have suggested that these chromatic differences may represent sexual dichromatism, but this has never been proven by eternal examination or observation of spawning behavior. Therefore, at this time it is just a hypothesis.

Observing Dragons in the Field

On a trip to Osezaki, Japan in 2003, I observed one of these morays among the small boulders that comprised a rocky jetty. I was upset because I was out of film and worried that I may not see another one during my three week stay in Japan. Boy was my worrying unnecessary! I would end up seeing over 50 dragon morays at the two areas we visited. On one dive, where I actually went looking for these morays, I saw nine individuals in about 50 minutes! I found that at Osezaki, it is most common on the outer bay side of the Osezaki Peninsula. I typically found it in interstices between the large coralline-encrusted boulders that made up a boulder tract that runs parallel to the coastline. (I rarely saw them among the rocks that were covered with macroalgae.) Individuals were also seen partially hidden between smaller rocks, in crevices under limestone overhangs, and in large fissures in large rocky pinnacles and outcroppings. I observed it at depths of 1.5 to 27 m (5 to 88 ft.). 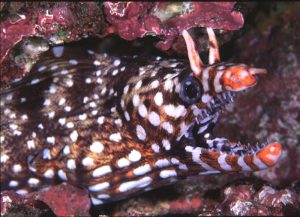 The dragon moray tends to be quite shy. Individuals are usually seen with only their heads protruding from a crevice (occasionally the front portion of the body may also be in view) and many will quickly pull into their refuge if closely approached. Although I never observed more than one dragon moray in the same crevice, they were often not far from one another. At one site, I saw five individuals in an area of about 3 x 9.2 m (20 x 30 ft). Occasionally, they were also observed in close proximity to the Kidako moray ( Gymnothorax kidako ). On several occasions I saw individuals being serviced by cleaner wrasses and banded coral shrimp ( Stenopus hispidus ). On two occasions I saw the banded coral shrimp cleaning the jaws and mouth of a dragon moray. 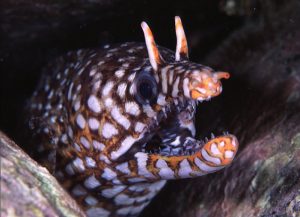 This moray’s contrasting combination of a menacing appearance and colorful attire makes it a great display animal for the larger home aquarium. But unfortunately, the dragon moray is not readily available in the aquarium trade and when it is available it commands big dollars. It is a fish-eater that will ingest anything that can fit into its expandable jaws. Although an uncommon event, larger specimens have even been known to bite and mutilate fish that are to large to swallow whole.

The dragon moray is very cryptic, especially smaller specimens, and must be provided with suitable shelter sites to facilitate acclimation. With time, it will become less of a recluse, spending more of the daylight hours with at least its head protruding from a hole or crevice. Some specimens will even begin to lay out in full view and become quite tame. The dragon moray will eat live feeder fish in captivity, although it may take several weeks, or even months, before some larger specimens commence feeding. 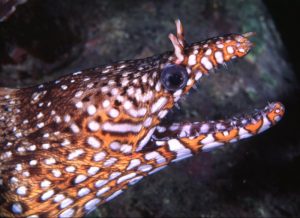 With time most dragon morays can, and should, be switched to long strips of fish flesh (e.g., smelt, orange roughly, haddock) and squid. Most morays can be enticed to eat non-living food by impaling it on the end of a feeding stick (I use a piece of rigid airline tubing with a sharpened end) and moving it in front of their head. It is also important not to feed your moray too frequently, because over feeding can lead to fatty infiltration of the liver, which impairs the functioning of this organ. It is not uncommon to see animals that have excessive fat deposits on the head and body in public aquariums, probably as a result of being overfed. Field studies suggest that morays eat infrequently, therefore in order to prevent this condition I would recommend feeding your eel to satiation twice a week. Also an overfed moray may regurgitate its partially digested meal, which can make a mess of your tank. Morays usually ingest one larger meal every three or four days.

It is not uncommon for morays to refuse to eat on occasion. This may occur if the eel is being overfed, if the water quality in the tank has deteriorated, the water temperature drops significantly, or sometimes occurs for no reason at all. The problem can often be rectified by performing a partial water change, offering your eel different types of food and by being patient. Continue to offer the eel food, even if he has shown no interest during recent attempts. Just keep trying. Keep trying different types of food to see if one certain food triggers a feeding response. I have found that a fasting moray will often have a hard time resisting cephalopods (e.g., squid, octopus) if they have been on a fish-only diet. Other foods I have used to initiate a feeding response in a finicky moray include smelt, orange roughly, and haddock. 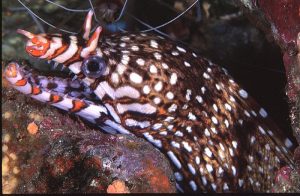 Because their large teeth can inflict serious injury to conspecifics, and fighting is likely to result, I would not risk placing two specimens in the same tank, unless they are a mated pair and you have an extra-large aquarium (e.g., 180 or more). You can keep juveniles of this species with other morays, but adults may attack other eels housed with them, especially if other morays are introduced after the dragon moray. If you are going to keep other eels with an adult dragon moray, they should be placed in an X-large tank with numerous hiding places. The dragon moray should be introduced to the tank last, and all the eels should be of similar size or the dragon moray should be slightly smaller.

The threat display of the dragon moray is spectacular. It will open its jaws as wide as possible, laterally flatten the gill region, cock its head to one side and erect its dorsal fin. I have seen other morays that were nearly as long as the dragon moray and well established in the tank before the dragon moray was added, flee to the upper corner of the tank when threatened by one of these menacing-looking beasts.