Aquarium Fish: News From The Warfront With Cryptocaryon Irritans, Part Two Of Five

This is the second installment in a five part series of articles about Cryptocaryon irritans, otherwise known as “saltwater ich.” The first article included an introduction and covered the history, recent developments and the question, “What is Cryptocaryon irritans?” It also included portions about the myths and misconceptions surrounding this parasite, what fish are susceptible, mode of transmission and cause of death. Part two continues with the life cycle, how to identify Cryptocaryon irritans, clinical symptoms of infection, adaptability of the parasite, the new challenge and prevention.

Hobbyists are often fooled into believing that an infection has subsided when the telltale white spots temporarily disappear. Trophonts mature and exit fish as part of the parasites natural life cycle before they form tomonts and reproduce. Generally, the white spots will reappear on the fish a few days later, usually in greater numbers. 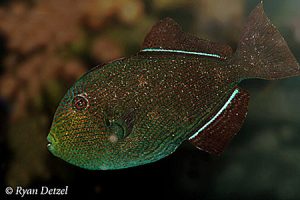 A Melichthys niger with the typical white speckled appearance due to Cryptocaryon irritans., Photos by Ryan Detzel

The Trophont Or Parasitic Feeding Stage

Aquarists are probably most familiar with the trophont stage of Cryptocaryon irritans. This is the feeding phase of the life cycle that manifests as visible salt-like white spots on the fish. Trophonts revolve continuously within the host’s outer body tissue layer or epithelium. They feed upon body fluids, tissue debris and whole cells of the fish (Colorni & Burgess, 1997). As the trophonts feed and grow in size the telltale white spots become increasingly easier to observe with the naked eye. Trophonts usually mature and exit the host after 3 to 7 days with a peak at 4 to 5 days (Colorni & Diamant, 1993. Colorni, 1985). Mature trophonts on the same fish usually exit within a narrow time frame of 16-18 hours. Trophonts will also leave the host earlier if the fish dies (Dickerson & Dawe, 1994). Trophonts that exit the fish prematurely due to the death of the host can form tomonts, but these tomonts are often immature and unable to produce live theronts.

When trophonts mature they exit the host and shed their cilia. This is the called the protomont stage. Protomonts are usually released from the host at about 5am or shortly before daylight (Burgess & Mathews, 1994b). It has not yet been established that protomonts exit the host during the cover of darkness as a strategy for survival. The timing may be merely coincidental. Protomonts then move along the substrate and rock for 2 to 8 hours before adhering to the surface.

The Tomont Or Reproductive Stage

Protomonts adhere to the substrate, rock, or other hard surface within the aquarium and encycst forming tomonts (Colorni, 1985). This is the reproductive stage. Tomonts generally then take between 8 to 12 hours to harden. Daughter cells forming within tomonts are known as tomites. The number of tomites produced by each tomont varies with the strain of Cryptocaryon irritans from less than 200 to more than 1,000 (Diggles & Adlard, 1997) Upon maturation tomonts excyst or hatch releasing daughter tomites into the water, at which point they become free-swimming theronts.

The time frame in which tomonts may hatch can vary greatly from 3 to 72 days (Noga, 2000). The life cycle of Cryptocaryon irritans is temperature dependant so an extended period of 72 days is highly unusual and can only occur in cooler waters. At “reef-type” temperatures the tomonts take from 3 to 28 days to excyst (hatch) with the peak between 4 and 8 days (Colorni, 1985). This variance may be a strategy for survival. However, after two weeks in the tomont stage the number of theronts produced and their ability to infect are greatly reduced (Colorni, 1992).

The Theront Or Free-swimming Infective Stage

The free swimming, infective stage of the life cycle of Cryptocaryon irritans is called a theront. Theronts have been reported to live in water in various studies from 12 to 48 hours after thatching from the tomont stage (Burgess & Matthews, 1994a.Yoshinaga & Dickerson, 1994. Colorni, 1985). They must find a suitable host within this period of time or they will die. Temperature, salinity, or differences in isolates may explain the discrepancy in time frame.

Theronts excyst or hatch from the tomont stage consistently between the hours of 2am and 9am (Yoshinaga & Dickerson, 1994). The circadian periodicity of theront emergence from the tomont stage does not appear to be related to light, but it is, as yet, unexplained. Theronts quickly begin to lose their ability to infect within hours of hatching from the tomont stage. Theronts have a low infectivity after just 6 – 8 hours (Burgess, 1992). At 7.5 hours after hatching 87% of theronts are still active. By 11.5 hours only 9% are still alive and active. At 15.5 hours from hatching only .34% are viable (Yoshinaga & Dickerson, 1994). Theront size varies with the isolate or variant of Cryptocaryon irritans, geographical location, host species and water temperature (Colorni & Burgess, 1997).

A proront is a theront that has contacted a host as attachment begins. Proronts invade the epithelium in as little as five minutes and the wounds can heal over them rapidly (Colorni & Burgess, 1997). Proronts then quickly become trophonts and start to feed on the host fish.

Cryptocaryon irritans can only be definitively diagnosed by microscopic observation of continuously revolving, pear shaped ciliates (trophonts) in fresh gill or fin clippings, or skin scrapings (Colorni & Burgess, 1997). However there are a number of clinical signs of infection that can be easily observed by aquarists, especially if they have grown familiar with the normal appearance and behaviors of their stock:

Adaptability Of The Parasite

Changes in some development features of tomonts were found after a few generations. These changes included differences from individual to aggregate- forming tomonts. Tomonts also changed from non-adherent or weakly adherent to adherent (Yambot, et al., 2003). The production of daughter tomonts by budding was reported in a cold-water variant of Cryptocaryon irritans (Jee, et al., 2000). Weekly adherent tomonts were found, in a seemingly distinct isolate, in extended tunnels within the epithelium (Diamant, et al., 1991).

Several new strains of Cryptocaryon irritans have been identified in Taiwan and other locations (Burgess & Mathews, 1995. Diggles and Adlard,1997). Highly aberrant and divergent isolates from Chiayi and Kaoshiung are of particular interest (Yambot, et al., 2003). The Chiayi isolate was discovered in a pond with a salinity of only 5ppt. This was the first recorded incidence of a Cryptocaryon irritans outbreak at such a low salinity. The Kaoshiung isolate was obtained from 12th-generation tomonts that originated from a cage at 10ppt salinity (Yambot, et al., 2003). Diggles and Lester, (1996a) suggested that the range of Cryptocaryon irritans has extended into estuaries. 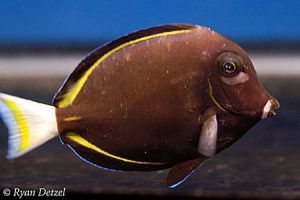 An Acanthurus nigricans with the faded colors and white spots * common symptoms of Cryptocaryon irritans., Photos by Ryan Detzel

Prevention is always preferable to treating infected fish. Quarantining all new fish for a minimum of three weeks prior to placing them in their permanent home will prevent the vast majority of outbreaks in display aquariums. A longer quarantine period of six weeks adds an extra measure of safety. Strict prophylaxis and proper quarantine procedures are the best ways to maintain aquariums that are free of Cryptocaryon irritans (Colorni & Burgess, 1997).

If the fish that are being quarantined do exhibit disease, treatment will be simpler in a quarantine tank and the established stock has not been put at risk. Fish can routinely be treated with hyposalinity therapy during the initial quarantine period. This will greatly reduce the potential of importing parasites into the display system. If the fish are moved from a display aquarium for treatment elsewhere, the display tank should be left without fish (fallow with the exception of invertebrates) for a minimum of 30 days. This is generally a long enough time period for the parasite to die out for lack of a host (i.e. fish). Again, a longer fallow period adds an extra measure of safety. 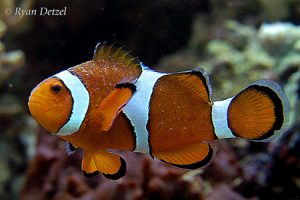 An Amphiprion ocellaris beginning to show signs of a Cryptocaryon irritans infection. Photos by Ryan Detzel

The third installment of this five part series will cover those few consistently reliable methods for eradicating Cryptocaryon irritans and some experimental treatments for its control.