A previous article examined the effects of increased inorganic carbon (‘alkalinity’) concentrations of symbiotic zooxanthellae – rates of photosynthesis within symbionts of the stony coral Porites lobata increased with increasing alkalinity concentrations. Discussion of how inorganic carbon is utilized and possible limitations concluded the article. For more details, see here: 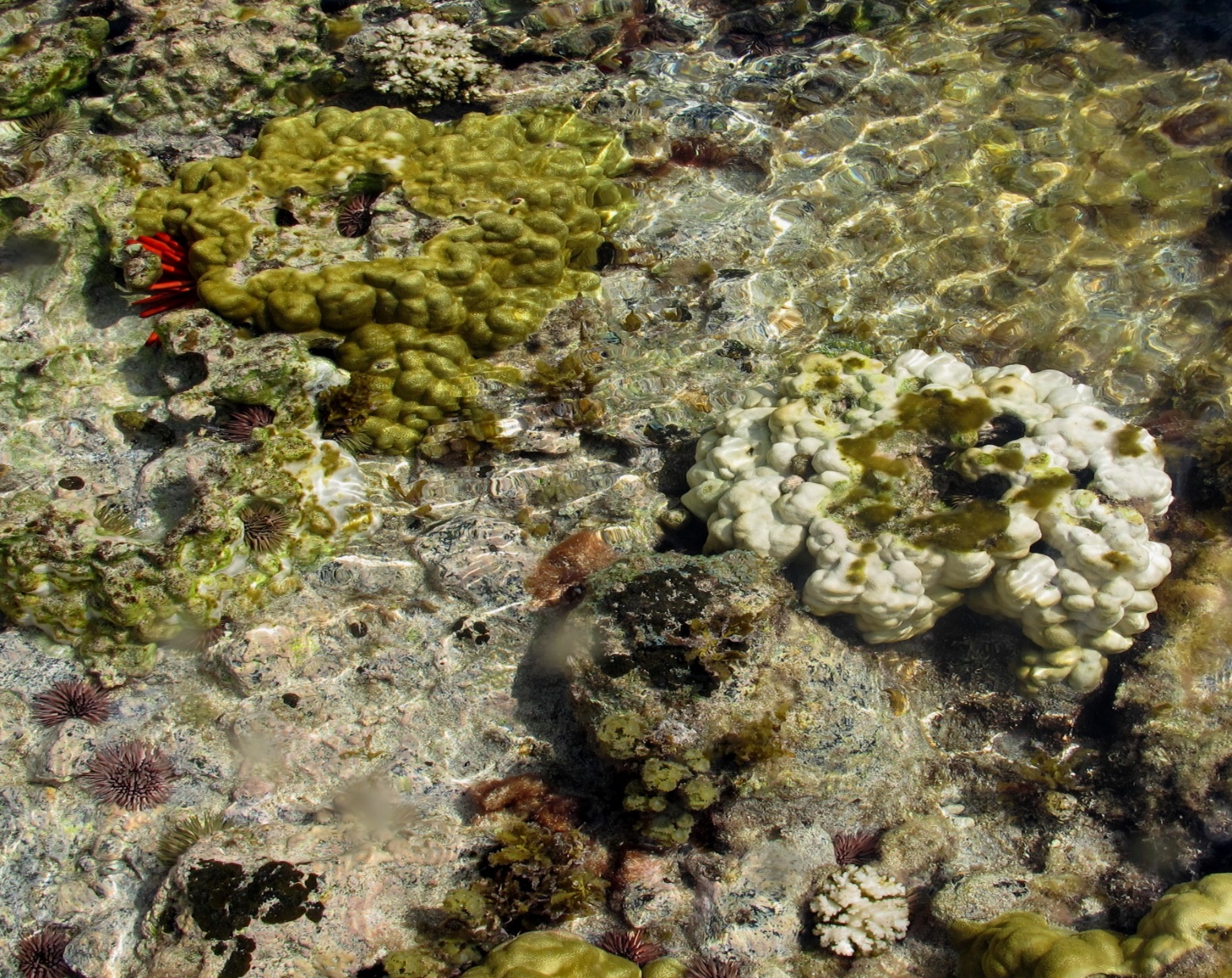 The stony coral Porites lobata, the coral used in these experiments.

This time, we’ll examine the effects of water motion rates on symbiotic zooxanthellae photosynthesis, and what role alkalinity plays. These results are from several experiments I conducted for a presentation at the 2016 Marine Aquarium Conference of North American in San Diego, California. This article will present results of the second experiment, and is in more detail than was possible within the time constraints imposed on the presentation. Specifically, effects of two water velocities on photosynthesis were compared to those effects observed at various alkalinity concentrations. Results showed, that in the case of zooxanthellae found within the tissues of the stony coral Porites lobata, water motion increased the rate of photosynthesis on a scale equal to that seen when alkalinity is increased. I’ll also briefly discuss possible effects of nutrients (ammonia and nitrate) on coral photosynthesis and growth.

Before beginning, perhaps we should review some terms used in this article. 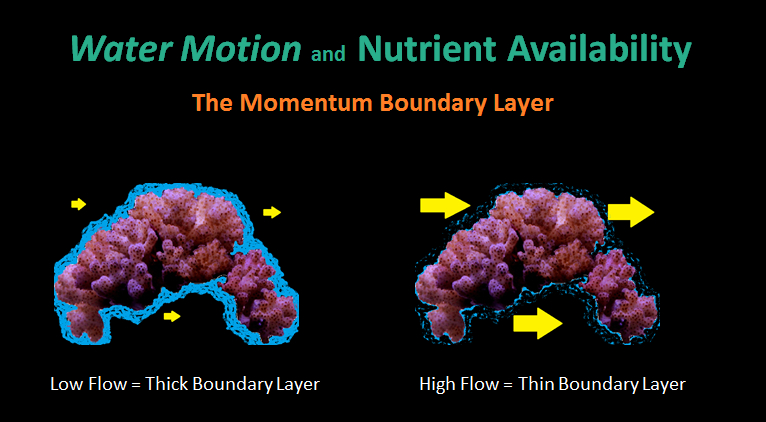 Natural seawater in a 10-gallon (38 liter) aquarium was spiked with ammonium hydroxide, and the nitrification process (conversion of ammonia to nitrate) reduced alkalinity to an unnaturally low concentration over the course of a few weeks. Nitrogen species were measured through use of colorimeter (DR800; Hach, Loveland, Colorado, USA) and their reagents for ammonia, nitrite, and nitrate (salicylate method, diazotization method, and cadmium reduction method, respectively. Nitrate measurements were corrected for chloride.) Once fully nitrified, half of this water was transferred to a five-gallon (19 liter) aquarium which contained a rack fashioned of plastic egg crate material. Fragments of the stony coral Porites lobata (glued to ‘reef plugs’) were then placed on this rack. Lighting was provided by a LED luminaire (dimmable) made by BuildMyLED (Austin, Texas, USA) and maintained at a sub-saturating intensity of 100 µmol·m²·sec as measured by a Li-Cor quantum meter and submersible LI-192 2 sensor (Li-Cor Biosciences, Lincoln, Nebraska, USA.) A tunze 6040 (tunze Aquarientechnik GmbH, Penzberg, Germany) variable speed propeller pump was adjusted to provide two water velocities (1.9 and 3.8 inches per second – 4.8 and 9.7 centimeters per second, respectively.) 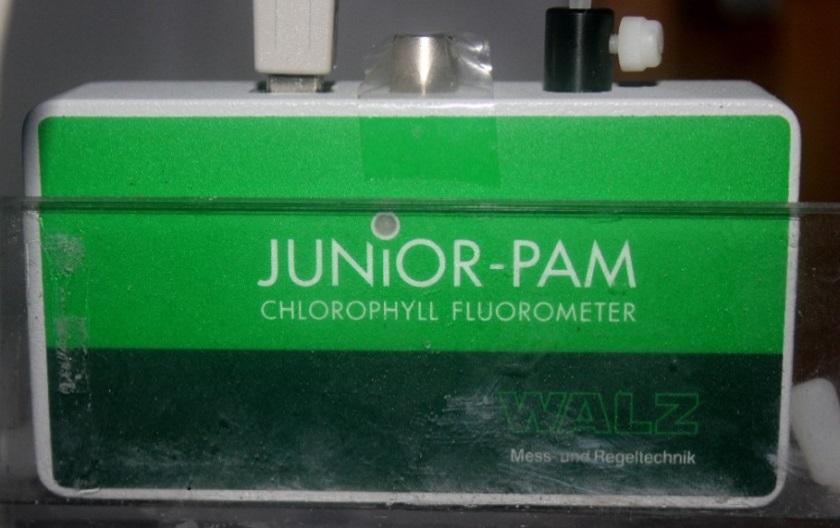 Figure 3. The electronic water velocity meter used in these experiments. 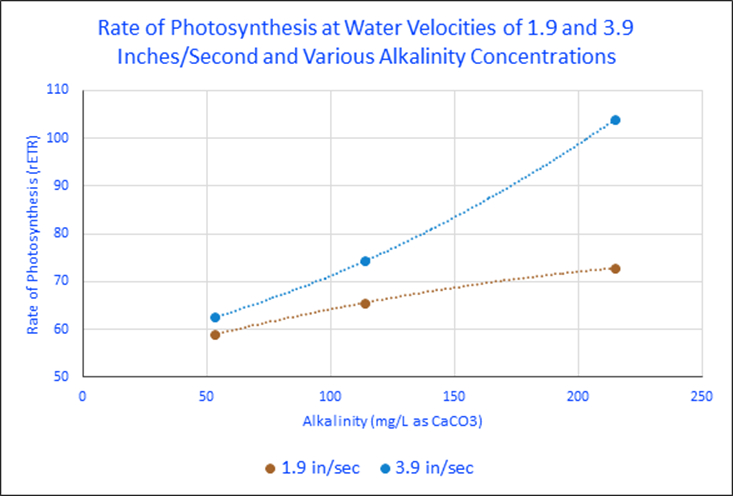 Figure 4 demonstrates that water motion can affect the rate of photosynthesis. Further, when we combine results of the water velocity and alkalinity experiments, some interesting trends emerge.

These experiments’ results offer insights on rates of photosynthesis by water motion, alkalinity, and combined effects. It seems that water motion makes little difference (at velocities used) when alkalinity is low. At higher alkalinity concentrations, the effects of increased water motion become more pronounced. See Figure 4 and the flattening of the trendline at the lower flow rate. Table 1 lists the rates of photosynthesis (rETRs) at various water velocities and alkalinity concentrations. Figure 5 graphs these percent increases. 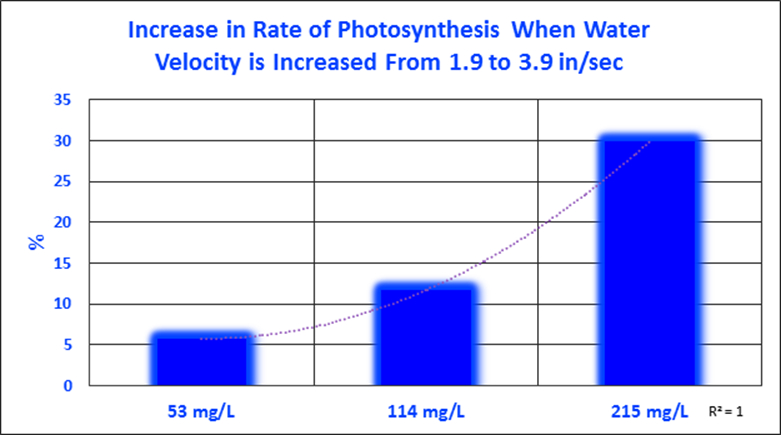 Figure 5. Zooxanthellae photosynthesis increased with increasing water velocity, but alkalinity appears to be limiting at low concentrations under the conditions of this experiment.

It is interesting to note flattening of trendline at low water velocity. This may be due to a diffusion of inorganic carbon through a thickened momentum boundary layer reaching a maximum. The results of these two experiments (water motion and alkalinity) demonstrate the effects of water motion can be influenced by ambient concentration of alkalinity.

If we combine the effects of water motion and alkalinity, the rate of photosynthesis was increased by almost 60%.

As a footnote, Jokiel et al. (1995) found concentrations of ultraviolet radiation-absorbing compounds (mycosporine-like amino acids, or MAAs) increased in coral tissues as water motion increased. Since MAAs are produced not by corals but by their symbiotic zooxanthellae (through the shikimate pathway), it is possible the increase is due to increased production by the symbionts (although an increased prey encounter rate is a possibility. Algae or particles containing MAAs could be ingested.)

In the previous article, we examined the possibility that elevated alkalinity concentrations could result in ‘tip burn.’ On the other hand, is it possible that prolonged conditions of low water velocity could create a diffusive boundary layer so thick that alkalinity (acting as an inorganic carbon source for photosynthesis) gradients could exist, thus limiting rates of photosynthesis (and its resultant lower production of oxygen and simple sugars, amino acids, and other foods?) We should remember that zooxanthellae and corals are dependent upon transfer of dissolved oxygen from the water column to them during periods of darkness (or shaded areas where rates of photosynthesis do not meet the respiratory requirements of the symbiont and host.) Is it possible that malnutrition in shaded area for foods translocated from zooxanthellae to their coral host eventually becomes starvation and soft tissues are consumed for their nutritive value?

In these experiments, the nitrification process was used to naturally reduce alkalinity, and resulted in 24 mg/L (or roughly 24 parts per million, if you will) nitrate as N (this is over 100 mg/L if reported as nitrate (NO3). After my presentation at the 2016 MACNA in San Diego, aquarist Justin Hester asked how nutrients might impact rates of photosynthesis. I didn’t have a ready answer at the time so I did some research and this is what I found.

Ferrier-Pagés et al. (2001) found nitrate additions (if combined with elevated iron concentrations) decreased coral growth rates by 34% over a 3-week period in the stony coral Stylophora pistillata while increasing cell-specific density of the algae. Recall that Atkinson and Bingman (1999) found elevated levels of iron in all artificial sea salts tested. Marubini and Davies (1996) reported that exposure to elevated nitrate concentrations decreased calcification rates by as much as 50% in the Caribbean stony corals Porites porites and Montastrea annularis. However, Taylor (1978) found that nitrate additions did not stimulate photosynthesis, production of metabolites by zooxanthellae, nor calcification rates of the Atlantic stony coral Acropora cervicornis.

The results of these experiments demonstrate that we cannot make sweeping statements on the effects of ammonia and nitrate. This raises an interesting question – Do different species or clades of zooxanthellae have a nitrogen source (ammonia or nitrate) preference? It has been shown that aquatic plants’ preferences vary (between ammonia and nitrate, and sometimes nitrite) and we can speculate preferred sources of nitrogen vary among Symbiodinium types. This possibility deserves further examination.

With this said, it is impossible to know how nitrate concentrations might have affected the rates of photosynthesis in my experiments.

We can speculate that decreased growth was due to competition for inorganic carbon by the algae for their use as an inorganic source for photosynthesis, resulting in less available for skeletogenesis. This leads us to an investigation of sink-source limitations, something that requires a dedicated article.

It would be simple (if time consuming) to set up experiments to investigate the impact of elevated nutrient concentrations and, further, see if high alkalinity/water motion could mitigate the impacts, if any. It would also be interesting to determine the saturation point of photosynthesis (by light) and determine if water motion and/or alkalinity can alter (raise) that point. If so, it could re-write our understanding of the role lighting plays in the husbandry of our captive reefs. Stay tuned.

Next time – Your corals could be bleached and you wouldn’t know it!