It’s considered taboo to keep large angels, butterflyfish and triggerfish in coral reef aquariums, but over the years I’ve become more experimental regarding fish in reef aquariums. One fish that always intrigued me is the crosshatch triggerfish ( Xanthichthys mento ). Based upon its natural habitat and feeding behavior, I suspected that it would fare well in a reef aquarium and ignore most sessile invertebrates. The only reason I haven’t tried one until recently is because I’ve never been able to find a juvenile specimen. Adult crosshatch triggers can reach 12 inches in length, and most of the fish that I’d seen for sale have been in the 6 to 8 inch size range. I’m a firm believer in purchasing juvenile fish. I’ve always found that they transport better and adapt easier to life in captivity. Adult fish often have narrow dietary preferences. They can be more territorial and wary than juvenile fish, which makes it more difficult to introduce adult fish into an existing community of reef fish. 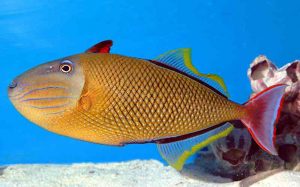 A spectacular adult male Crosshatch Triggerfish displays in front of the glass in an aquarium at the Reef & Fins store in Stamford, CT. This fish is nearly 7 inches in length.

All triggerfish belong to the order Tetraodontiformes, which includes the closely related filefish, pufferfish and boxfish. Triggers are members of the family Balistidae. The common name “trigger” comes from a unique characteristic of the first dorsal spine. It can be “locked” into an upright position and held in place by the second dorsal spine. At the first sign of danger, triggerfish bolt for the nearest reef crevice and “trigger” their built-in locking mechanism. Once secured in place, they’re near impossible to remove. 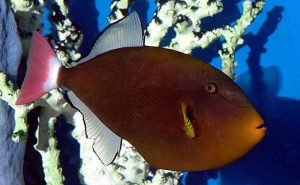 Pinktail Triggerfish ( Melichthys vidua ) are closely related to triggers of the Xanthichthys genus. Unlike most triggers in the family Balistidae, they have a relatively mellow disposition.

The crosshatch trigger has the typical triangular shape of triggerfish when its fins are erect. It looks more like a torpedo when it’s on the move. Similar to other members of the genus Xanthichthys, crosshatch triggers are sexually dichromatic. The male has a more intense yellow background color on the body and sports a red-rimmed tail, as opposed to the female, which has a yellow-fringed caudal fin. They are easily distinguished. Both sexes have blue radiating lines on the face and black lines that criss-cross along the body, hence the name “cross-hatch.”

Crosshatch triggerfish are distributed throughout the tropical and sub- tropical Eastern and Western Pacific Oceans but occur mostly around smaller isolated oceanic islands. They can be found in large schools in open water, usually at depths of 90 feet and greater. They feed exclusively on passing zooplankton. This partly explains their relative rarity and expensive cost in the aquarium trade. They can be kept singly, in pairs, or in groups of one male and two or more females in the aquarium. I would not try to keep two males in anything but the largest of aquariums. 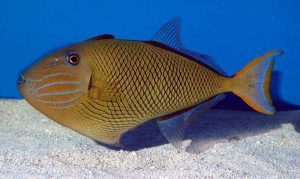 A healthy female Crosshatch Triggerfish ( Xanthichthys mento ) poses for a picture in one of the sale tanks at the Reef & Fins store in Stamford, CT. This fish is approximately 6 inches in length and shares this aquarium with a larger male specimen

Similar to most mid-water planktivores, crosshatch triggers are not finicky eaters and will consume most aquarium fare. Their diet should consist of predominantly meaty seafoods, such as chopped whole shrimp, squid, larval silversides, and mysis shrimp. Chopped krill is a particularly good food item because it provides beneficial carotenoids that help maintain the bright pigmentation in these fish. Similar to other reef fish that feed from the water column, crosshatch triggers should be fed a few times a day in order to maintain body weight. If a fish develops a pinched abdomen, it’s not getting enough food. Once starvation reaches the dorsal musculature, it’s usually too late for the fish to recover.

Crosshatch triggers are active fish that can grow to a large size; therefore I recommend a minimum of a 55 gallon aquarium for a single specimen. Pairs and groups should be maintained in nothing less than a 90 gallon aquarium. They require areas of open swimming space as well as places to hide at night or when frightened. A small area of reef rock set up along side an open expanse of sand will suit the crosshatch triggerfish just fine. Since they occur at greater depths, it may take a while for these fish to adapt to the brighter lights in coral reef aquariums. If the plan is to maintain them in a live rock/fish-only type setup, then I suggest using lights with a preponderance of blue. Temperature is not critical, but I would err on the cooler side of reef temperatures (75-78 degrees Fahrenheit). This species frequently occurs around sub-tropical islands, such as Midway Island in the Northwestern Pacific and Soccoro Island in the Eastern Pacific. Around tropical islands, they occur at greater depths where the water temperature is cooler and more stable. 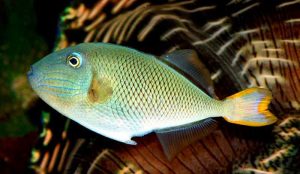 A juvenile Crosshatch Triggerfish ( Xanthichthys mento ) swims past a Tridacnid clam in the author’s 500 gallon reef aquarium. It is a bold and active fish and makes great addition to a reef aquarium. The specimen pictured here is approximately 3.5 inches in length.

The up-slung mouth, protruding jaw, and eyes set atop the head give a further clue as to the open-water feeding habits of the crosshatch triggerfish. With that anatomical structure, it’s near impossible to feed on benthic invertebrates. This is why I thought they would make a good and interesting addition to my coral reef aquarium, and so far all is well. After a rude welcome from my existing power-blue tang ( Acanthurus leucosternon ), everyone settled down and the juvenile crosshatch trigger became part of the community of fish in my 500 gallon reef aquarium. It eats very well and completely ignores all corals, clams, and other sessile invertebrates, just as I expected.

The ornery disposition of most triggerfish is absent in the crosshatch. It’s a relatively mellow fish that tends to ignore its tank mates. It will mix well with most other reef fish, although I wouldn’t suggest introducing small Pseudochromids, or similar bite-sized fish, into a tank of adult crosshatch triggers. They could be mistaken for a special food treat. On the other hand, existing small damsels, wrasses and basslets are generally ignored. 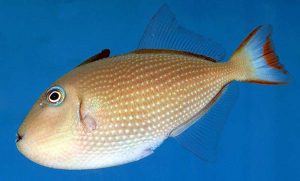 As I mentioned earlier, I greatly believe in purchasing juvenile specimens for the aquarium. This is especially so with crosshatch triggerfish. Adults tend to be very shy and can take quite a while to adapt to captivity. If they are going into an aquarium of aggressive fish or larger fish, I suggest a period of quarantine first in order to introduce the trigger to aquarium conditions and prepared foods. Crosshatch triggerfish are generally hardy but I would insist on seeing a fish eat before purchasing it. These are not inexpensive fish and I wouldn’t want to make that kind of mistake. I have seen adult crosshatch triggers refuse food and waste away in aquariums. Perhaps they suffered internal injuries from being brought to the surface too quickly.

If you want to try your hand at something less exotic and less expensive than the crosshatch triggerfish, the similar blue-throat trigger ( Xanthichthys auromarginatus ) and sargassum triggerfish ( Xanthichthys ringens ) are good alternatives. These fish are easier to find and generally hardier than the crosshatch trigger. They also don’t grow as large. The related genus, Melichthys, offers additional possibilities, such as the popular pink-tail trigger ( M. vidua ). Similar to the crosshatch triggerfish, all these triggers feed on zooplankton passing in the currents along outer reef drop- offs. They should not pose a problem with corals in an aquarium and tend to have a more placid disposition than many of their triggerfish brethren.

Media Review: Algae: A Problem Solver Guide, Surgeonfishes of Hawaii and the World