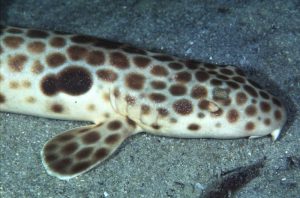 There are a number of sharks that a regularly make it into the ornamental marine fish trade. Most of them are poorly suited for all but the most immense home aquarium. But there are a few species that show-up in aquarium stores that are well-suited to the large home aquarium. The best of these are the epaulette sharks ( Hemiscyllium spp.).

This epaulette sharks are members of the family Hemiscylliidae. This genus contains six species. Some of the most ornately marked species in the genus Hemiscyllium have relatively limited distributions (most are scattered around the coast of Papua New Guinea and Irian Jaya) where limited or no fish collecting occurs. For example, there is an undescribed species that is found in Milne Bay, Papua New Guinea that sports a very attractive livery. There is also a handsome species, Hemiscyllium freycineti, from Irian Jaya. The only species that shows-up in the aquarium trade with regularity is the epaulette shark ( Hemiscyllium ocellatum ). This species is found around the coast of northern Australia. It is also reported from Papua New Guinea and Irian Jaya, but these reports are probably erroneous (that is, they are cases of confusing H. ocellatum with similar species). 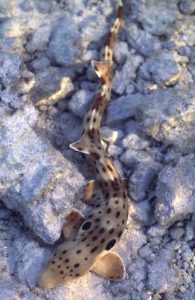 An adult, female epaulette shark crawls along the reef flat during low tide.

The epaulette shark has a large black spot (usually surrounded by white) just behind the pectoral fins, and numerous dark spots that are smaller than the ocelli. Two color phases have been observed: one has a golden base color, numerous small dark spots, and very pronounced ocelli, while the other is tan with fewer, larger spots and less distinct ocelli. Hallstrom’s epaulette shark ( Hemiscyllium hallstromi ), which is known only from the waters of Papua New Guinea, is similar to H. ocellatum. Hallstrom’s Epaulette has spots that are equal to or larger than the ocelli, and it has no spots in front of the eyes, whereas the epaulette shark may or may not have spots there.

What makes the epaulette sharks so ideal for the home aquarium is that they are adapted to get around in confined spaces. Rather than cruising around in the water column like many of their kin, the epaulette sharks have muscular paired fins that they use to clamber over the seafloor. They also have slender, almost eel-like bodies that allow them to slip between coral branches and into tight reef fissures. Some shark-loving aquarists may not be attracted to the Hemiscyllium spp. for this reason – they are somewhat unshark-like! But this is the main reason that they are so well-suited to the home aquarium. 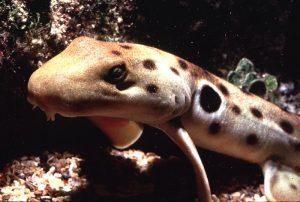 A adolescent epaulette shark stands on its muscular pelvic fins.

Another trait that lends to their “great aquarium shark” status is their relatively small maximum length. For example, the epaulette shark ( H. ocellatum ) hatches at 15 cm (6 inches) in length and attains a maximum length of 107 cm (42 inches). Most of the individuals I have seen in aquariums and in the wild were under 1 m (39 inches) in length. Males of this species attain sexual maturity at a length of 59 to 70 cm (23 to 28 inches), while females are sexually mature at 60 to 65 cm (24 to 26 inches) in length.

A juvenile epaulette shark can easily be kept in a smaller aquarium, even a tank as small as the standard 20-gallon long. But the aquarist must be prepared to provide larger quarters as they grow, and they can grow fast! Juveniles may grow as much as 29 cm (11.4 in.) in a years time. At maximum size, most bamboo or epaulette sharks could be comfortably housed in a 180-gallon tank. The Hemiscyllium spp. are all found in tropical seas and will thrive at water temperatures of 22 to 29 ºC (72 to 84 ºF). Remember, at lower water temperatures your shark will grow more slowly. 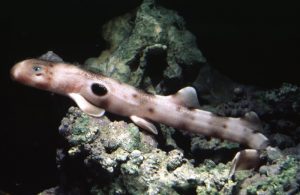 Because these sharks, especially juvenile specimens, spend much of the daylight period hiding in cracks and crevices, some type of aquascaping is needed to make them “feel” safe. They will appreciate secure ledges and caves, but be advised that epaulette sharks will dig under rockwork to locate food or to create suitable hiding places, so an unstable reef structure can end up crushing your shark.

The epaulette sharks feed mainly on worms and crabs, while shrimps, small fishes and small fishes are eaten to a lesser degree. Some of these prey items are dug out of the sand or sucked from crevices. A normal captive feeding regimen for an epaulette shark would be to feed it two or three prey items, several times a week. You should keep an eye on your shark’s girth. If it begins to lose weight, feed it more. The epaulette sharks have relatively small mouths and teeth suited for grasping, not cutting. Young epaulettes may have trouble ingesting and chewing larger food or hard-shelled invertebrates. To ensure that the food presented is consumed, chop it into bite-sized pieces, and make sure live prey is small enough to be swallowed whole. You can let the food drop to the bottom of the tank and let the epaulette find and eat it, or you can present the food on a feeding stick. 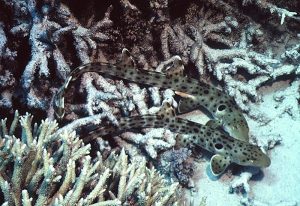 Courtship in the epaulette shark – the male is grasping the left pectoral fin of the female in its mouth.

Epaulette sharks are a threat to small fishes and to ornamental crustaceans. They might be harassed by fishes that feed on sessile invertebrates, like larger angelfishes, butterflyfishes, triggerfishes and puffers. These fish will occasionally nip at these sharks. I have seen epaulettes that have had their eyes damaged by these types of bony fish tankmates. Small epaulettes are also potential prey for larger morays and frogfishes.

Although the epaulette sharks rarely succumb to parasites, they are host to a variety of parasites in the wild. For example, a parasitic ostracod crustacean (known as Sheina orri ) has been reported from the gills of the H. ocellatum. Bennett et al. (1997) reported that 17 of 28 epaulette sharks examined were host to this parasites. The ostracods use their claws to anchor to the gill lamellae and do cause some damage to the tissues. Gnathiid isopod larvae are also frequently found on H. ocellatum. These parasites tend to attach around the cloaca of male and female sharks, but are also found on the gills and in the mouth. They do relatively little damage to their epaulette shark host. One way to rid an epaulette shark of some of these parasites is to add a cleaner wrasse. I have seen this shark being cleaned by the blue streak cleaner wrasse ( Labroides dimidiatus ) in the wild. This wrasse prefers to feed on isopod larvae which it will pick from the gill slits, body, and mouth of this shark. 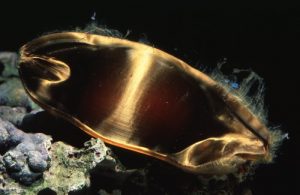 The newly deposited eggcase of an epaulette shark.

Although usually passive in nature, mature male epaulette sharks have been known to behave aggressively towards consexuals, especially in smaller aquariums. Adult males may even attack other shark species and may harass females. If you want to keep more than one of these fish, it is best to acquire females. If you are hoping to set-up a breeding colony, then keep one male and one or more females (of course, you will need a larger tank to do this). If a male persistently harries its female tankmates, you may have to separate the male after mating occurs.

These sharks readily reproduce in captivity. I have seen captive, breeding colonies in tanks as small as 135 gallons (Note: I would recommend a larger tank for a breeding group.) During courtship, the male epaulette shark grasps the female’s pectoral fin in his mouth. The male engulfs the fin up to the pectoral base. The female may attempt to resist the males advances, dragging him through staghorn coral or over the sea floor. In a pair of H. ocellatum I observed mating in the wild, the female swam off the bottom with the male still attached to her pectoral fin. The male then twisted his body around and under the female’s so that he could insert a single clasper. (In this pair, the male was considerably longer than the female.) Copulation may last for up to 2 minutes. When the pair break their union the end of the clasper remains in the flared position.

The epaulette sharks are oviparous. They lay a leathery egg case with a tuft of filaments on one side that anchors the egg to the ocean floor. The eggs are deposited at night, two or three at a time, and hatch in about 130 days at 25-ºC (77-ºF). Eggs are occasionally eaten by the adult sharks, so it is best to incubate them in a separate tank (e.g., the aquariums sump). Males are more prone to eating the eggs than females. I would encourage those that have the space, money and interest to set-up breeding colonies of these sharks.

Before you go out an purchase an aquarium set-up for your epaulette shark, you should be aware that these sharks can live as long as 20 years in captivity. Happy fish-watching!