This is my first of a regular column on marine fishes for Advanced Aquarist’s Online Magazine. My intention is to focus on a single species for each article. I’ll be introducing readers to both commonly available fish and some of the oddities that occasionally show up in the aquarium trade. Since this publication is intended for aquarists, I plan to concentrate more on practical information and husbandry requirements for each species rather than on the esoteric. 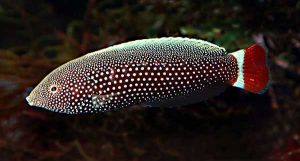 Our first subject is the Psychedelic wrasse ( Anampses chrysocephalus ), which is also known as the Red-tail, Tamarin and Psych-head wrasse in the aquarium marketplace. This beautiful species has both mesmerized and perplexed aquarists for many years. It’s one of thirteen species of the genus Anampses, which is part of the larger family Labridae. The Psychedelic wrasse is endemic to the area of the Hawaiian Islands, which is another way of saying that they aren’t found anywhere else. They are characterized by their protruding front teeth on both the upper and lower mandibles, which they use to scrap prey items off of rocky substrates.

Similar to all Anampses species, the Psychedelic wrasse is a protogynous hermaphrodite. All males develop from fully-functional “initial-phase” females. The most dominant female in a group undergoes a transformation of both color and biology and converts into a fully-functional “terminal-phase” male fish. The dissimilarity in color between the sexes is dramatic. It’s easy to believe they are different species! The initial-phase females are mostly dark brown overall, with white spots and a bright red tail. Terminal males are a lighter brown in color and have a bright orange head that is covered with blue spots and radiating lines, hence the name “psych-head” wrasse. Females average three to four inches in length, while terminal males can reach a length of seven inches.

Typical of many genera of small wrasses, females of the species tend to occur in loose groups, while males are either close by or remain solitary. Their preferred habitat is a mix of reef, rocks, and sand, where they hunt for small crustaceans and mollusks during the day. An appropriate aquarium should be at least 50 gallons in volume and decorated with live rock and live sand. Since they bury under the sand at dusk, Psychedelic wrasses must be provided with a fine substrate of calcareous sand that’s at least three inches deep. The ideal grain size should range between 0.5 mm and 2 mm. If the bottom of the aquarium is left bare, Psychedelic wrasses become agitated and often rub their snouts against the bottom glass in a frantic attempt to bury themselves. This habit frequently causes injuries to the mouth, and sometimes infections, from which they rarely recover.

The aquarium lighting should be bright and mimic a tropical reef habitat. This can be accomplished with VHO fluorescents, power compact fluorescents or metal halide bulbs. Psychedelic wrasses can safely live with corals, clams, and large crustaceans in a typical reef aquarium. In fact, they do best in a well- established reef aquarium or refugium type aquarium. They are active fish that require copious amounts of small food items in order to thrive in captivity. Good substitute foods in the aquarium include fresh frozen Euphausia pacifica plankton, mysis shrimp, enriched brine shrimp, chopped clams, squid, and table shrimp. They have to be fed a few times each day, especially if there is not an abundance of natural foods in the aquarium. I’ve maintained a female specimen very well in my 60 gallon refugium aquarium, which is loaded with small crustaceans, copepods, and amphipods to feed upon throughout the day. In addition, there is very little competition for food in this aquarium. Temperature is not critical but is best maintained between 75 and 82 degrees Fahrenheit. Salinity is also not a significant parameter, but I always find it best to stay in the range of natural limits and therefore recommend a specific gravity of 1.023 to 1.025 at the above stated temperatures.

I haven’t mentioned one little fact yet related to Anampses chrysocephalus: They rarely survive for very long in captivity! This is the perplexing part. There are no definitive answers as to why they do so poorly in aquariums. They are not particularly susceptible to parasitic infections and they often feed in captivity, so why don’t they thrive? I think the answer is what I call “large fish with small mouth syndrome.” Psychedelic wrasses have relatively small mouths in relation to their body mass and require an almost continual supply of small prey items in order to maintain body weight. In the average home aquarium, they will not get enough to eat and can’t compete well for food against the typical aquarium fish. Unlike many reef fish, Psychedelic wrasses are “chewers” not “gulpers.” They can spend five to ten seconds chewing on a piece of food before swallowing it. By the time they get down one piece of food, the rest has been gobbled up by the other inhabitants. Their deliberate feeding habits are similar to Mandarin fish (_Synchiropus_ species), which also has a poor reputation for survival in aquariums. 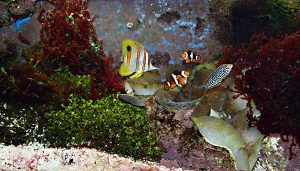 In addition to “large fish with small mouth syndrome,” Psychedelic wrasses ship very poorly and regularly arrive at stores in terrible condition. They need a period of time to recuperate and acclimate to aquarium life. This especially applies to terminal males. Even if they survive the rigors of shipping, most terminal males never adapt to captive life. They often frenetically pace up and down the aquarium glass; refuse food; then die. I wouldn’t recommend buying a terminal male fish at all unless you’re willing to make the effort of quarantining it in a sizeable aquarium where it can be fed frequently. I also recommend passing on any Psychedelic wrasse that is not swimming normally or shows no interest in food at the dealer’s shop. Female Psychedelic wrasses can be maintained in groups and, in fact, will do better this way. Males should not be kept with other terminal males in any sized aquarium. They defend large territories in the wild and will not tolerate the presence of another terminal male in the same aquarium.

If you are still interested in trying your hand with at an Anampses chrysocephalus, I suggest the following: