Chemistry and the Aquarium: Specific Gravity: Oh How Complicated!

Welcome to the surprisingly complicated world of specific gravity!

One question that every marine aquarist faces is the amount of salt to add to the tank. Most beginning texts choose to describe the salinity in terms of specific gravity, and go on to relate how one measures it with a hydrometer. While not nearly as precise as measuring salinity with a conductivity probe or a refractometer, hydrometers are chosen by many because they are inexpensive and easy to use. For many aquarium purposes, they are perfectly adequate.

Unfortunately, measurements of specific gravity are far more complicated than most hobbyists recognize. Additionally, there has been a great deal of misinformation provided about how salinity relates to specific gravity and hydrometer readings, and how such values vary with temperature. This article will endeavor to make these relationships clear. 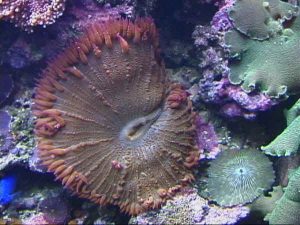 Figure 1. An orange Epicystis crucifer anemone that has been thriving in the author’s tank at S=35.

What I won’t address in this article is the question of what salinity values are “optimal” for keeping marine aquaria. That has been addressed in previous articles, such as this article by Ron Shimek.

One further point on salinity: in this article, as in the chemical oceanography literature, the salinity of seawater is now defined as a dimensionless unit, S. In older literature it has the units of ppt (parts per thousand by weight), and that is roughly the way to think of it, but it is now defined as the ratio of the seawater conductivity to that of a potassium chloride solution of defined composition. Consequently, seawater has S=35 (or some similar number). Other solutions, like simple sodium chloride, are not defined in this way, and are still reported as ppt. This definition of salinity is described in detail in “Chemical Oceanography” by Frank Millero (1996).

What is specific gravity?

Likewise, if things denser than water are dissolved in it, the specific gravity goes up. Nearly all inorganic salts are denser than water, so dissolving them in water makes the specific gravity rise. This rise can be used by aquarists to gauge how much salt is in their water. Of course, it cannot tell you what is in the water, but if you are using an appropriate salt mix, it can tell you how much is there and whether it approximates natural seawater or not.

Standard hydrometers work on Archimedes Principle. This principle states that the weight of a hydrometer (or other object, like an iceberg or a ship) equals the weight of the fluid that it displaces. Consequently, the hydrometer will sink until it displaces its own weight. When it is put into solutions of different densities, it floats higher or lower, until it just displaces its own weight. In denser fluids it floats higher
(displacing less fluid) and in less dense fluids it floats lower. In essence, this principle is a reflection of the fact that the gravitational potential energy of the system is minimized when the hydrometer just displaces it’s own weight. Any different displacement puts forces on the water and hydrometer that cause them to move toward the optimal position. 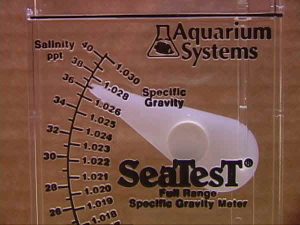 Figure 2. A SeaTest swing arm hydrometer made by Aquarium Systems, showing the arm made of two different materials.

One question often asked is whether changes in various ions impact specific gravity. The answer is that, to a hobbyist using a normal salt mix, they do not. To get a ballpark understanding of this effect, it is reasonable to assume that all ions contribute to specific gravity in an amount proportional to their weight percentage in seawater. For example, I looked up the specific gravity of 15 different inorganic salts at the same “salinity” (100 ppt at 20 °C). All were very similar, with less than a factor of two difference between the highest (zinc sulfate, specific gravity = 1.1091 g/cm3) and the lowest (lithium chloride; specific gravity = 1.0579).

In a sense, the more of any ion that is present regardless of chemical nature, the larger is the effect on specific gravity. Since that’s exactly what salinity is (the weight of solids in the water), it is unlikely that any normal ion variation seen by marine aquarists will unduly skew specific gravity measurements. Since the top 4 ions in seawater (Na+, Mg++, Cl-, SO4–) comprise 97 weight percent of the total, any changes in other ions will have no significant impact on specific gravity.

Temperature of the Standard

Unfortunately, the world of specific gravity is not as simple as described above. Different fields have apparently chosen different standard temperatures. In addition to the 3.98 °C standard, others include 20 ° C (68 °F) and 60 °F (15.6 °C). A quick look through several laboratory supply catalogs shows many examples of hydrometers using each of these two, and a few odd ones thrown in for good measure (such as 102 °F for milk). Most authors writing about marine aquaria assume that people are using the 60 °F standard, but in reality many aquarists are not, and in some cases they don’t even know what they are using. Some hobby hydrometers use other standards, with 77 °F being quite popular (used by Tropic Marin, for example).

The density of pure water at 20 °C is 0.998206 g/cm3, and at 60 °F it is 0.9990247 g/cm3. While these seem close to 1, and are often simply claimed to be 1.00 in many contexts, the difference can be substantial. For example, the specific gravity of natural seawater (S =35) is 1.0278 using the 3.98 °C standard, 1.0269 using the 60 °F standard, 1.0266 using the 20 °C standard, and 1.0264 using the 77 °F standard. [I calculated these based on tables of the density of seawater, different tables may present slightly different densities that might then result in slightly different specific gravities]. While these differences are small, they are real. They arise because the density of pure water and seawater change in slightly different ways with temperature. Seawater becomes less dense faster than pure water as the temperature rises. This effect may relate to the interactions between ions and between ions and water in seawater that are broken up as the temperature rises, but that’s beyond the scope of this article.

Unfortunately, it has been my experience that many aquarists quoting a specific gravity measurement for their tanks do not know what standard is being used by their hydrometer. Most quality lab hydrometers will have the standard used written on them or their supporting documents. Some hobby hydrometers, however, make no mention of the standard used. Note that there is NO “correction” table that can convert readings at temperatures other than the standard temperature unless you know the standard temperature. If you don’t know it, using such a table will not give accurate values, and may give a value farther from the truth than the uncorrected reading.

Temperature of the Sample

Why does the temperature of the sample matter? There are two reasons. One is that the hydrometer itself may change its density as a function of temperature, and thus give incorrect readings at any temperature except that for which it is specifically designed (i.e., it floats higher or lower as its density changes). Unfortunately, unless you have a table for your specific hydrometer (which is rarely supplied), this effect cannot be corrected by a table because of the different materials of construction of hydrometers. Various types of glass and plastic
are used for hydrometers, and each will have it own particular change in density as a function of temperature. It should be noted that this effect is substantially smaller for glass hydrometers than the second effect described below because the change in density of glass with temperature is 8-25 times smaller than the change in density of aqueous fluids.

The impact of temperature on the density of the sample can be corrected in a table, assuming that one knows how the density of the sample would change with temperature (which is well known for seawater), and also that one knows the temperature of standardization of the hydrometer. For example, if you have a hydrometer calibrated for 60 °F/60 °F, then you will be correcting for the difference in density between the sample at 60 °F, and the temperature at which you measured it. If the actual sample were measured at 86 °F, then the correction is the ratio of the density of seawater at 86 °F (approximately 1.0217 g/cm3) divided by the density at 60 °F (approximately 1.0259 g/cm3), or 0.996. Thus a specific gravity reading, or more correctly, a hydrometer reading, of 1.023 would be corrected to an “actual” reading of 1.027.

Again, if you do not know the temperature of standardization, you are out of luck, and a correction using a table is as likely to cause bigger errors, as it is to correct any. Likewise, using a “correction” table that does not specify what it is intended to correct is equally risky.

Some marine hobby hydrometers claim to be accurate at all temperatures (68 – 85 °F; these include SeaTest, Deep Six, and eSHa Marinomat). Such a device can be designed, if its change in density as a function of temperature were exactly the same as seawater at all temperatures. Two of these tested below (the SeaTest and the Deep Six) do a fair job of temperature correction, but in fact slightly overcorrect. 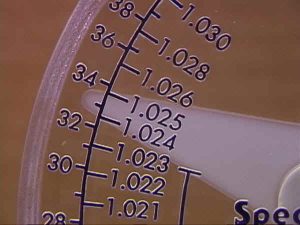 Of the three hobby hydrometers examined, all were fairly precise by hobbyist standards. There was no difficulty reproducibly reading any of them to a salinity of ± 0.5 or better (Figure 3). This is not to say, however, that the devices were that accurate. 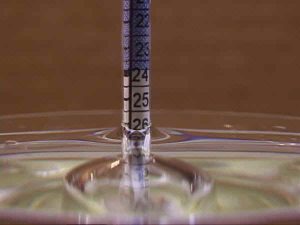 Figure 4. A Tropic Marin hydrometer showing the meniscus rising to about 1.0260, but the actual reading is about 1.0265.

Accuracy, of course, is not the same as precision. Precision can be represented by significant figures, and the measured value of 1.025763 is far more precise than 1.026. However, if the actual specific gravity of the fluid were 1.0261000000, then the second reading is much more accurate (i.e., closer to the real value) than the first.

How to Use a Standard Hydrometer

Beyond those issues already described, here are a few tips in using a hydrometer:

How to Use a Swing Arm Hydrometer

In addition to those described above, here are some special tips for swing arm hydrometers: