Okay, it’s not the most exciting and colorful of marine fish, but the scopas tang ( Zebrasoma scopas ) is a utilitarian fish and a staple in the marine aquarium hobby. Lately, I’ve become somewhat fascinated with this fish. I’ll get to that later.

The scopas tang, or brown tang, is a member of the genus Zebrasoma, which is a part of the family of tangs and surgeonfish, Acanthuridae. The genus Zebrasoma is a relatively small genus consisting of seven species that are characterized by their round, laterally compressed bodies and pointed snouts. They’re popular in the aquarium trade because of their color, shape, and propensity to eat nuisance algae in the aquarium. The long snout enables Zebrasoma tangs to reach filamentous algae in reef interstices that are out of the reach of other Acanthurids. Zebrasoma are found in every tropical ocean and sea except the Atlantic. The scopas tang is equally widespread and occurs throughout the Indo-Pacific Ocean from Africa to Japan. Juvenile scopas tangs are generally solitary fish and never stray far from the cover of the reef. Adults roam wide expanses of the reef and can be found singly, in pairs and in large groups of the same or mixed species of
tangs. They inhabit lagoonal areas as well as the outer reef from a depth of two to sixty feet. There are no visible differences between males and females of the species, but juvenile scopas tangs have exaggerated dorsal and anal fins as well as thin white vertical lines that transverse the body. In some respects they resemble juveniles of the sail fin tangs, Z. desjadinii and Z. veliferum. Scopas tangs reach an ultimate adult size of 20 cm. That’s quite a bit smaller than the giants of the genus, the sailfin tangs, which can reach lengths of 30-40 cm. 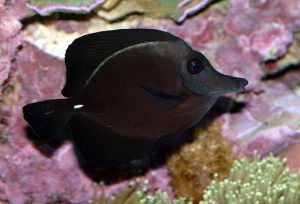 Black-colored scopas tangs ( Zebrasoma scopas ) are sometimes sold as “black tangs” ( Zebrasoma rostratum ). Pictured is the genuine “black tang.” Note the greenish tinge that runs along the dorsal spine. This is absent in scopas tangs.

The coloration of scopas tangs is highly variable. It incorporates shades of gray, brown, yellow and white. Some specimens can be solid yellow, while others solid black! The black variants are sometimes sold as Z. rostratum, the black tang. The genuine black tang is a more expensive fish with limited distribution. It differs from the scopas in having a longer snout and a greenish tinge that runs along the base of the dorsal fin. There are reports of interspecific hybridization, which may explain the appearance of black scopas tangs. There are also odd scopas tangs that appear to be a mix of black, yellow ( Z. flavescens ), and brown tangs. There’s some question as to whether these wild color schemes are the result of cross-breeding or simply mutations. There’s even speculation that it’s related to a fungus! I can attest to the fact that these “mutant” scopas tangs will and often do change color in captivity, so be careful what you pay for! I have a specimen that changed from a mostly yellow coloration, with splatterings of black, into one that’s now half brown and yellow. This color change occurred over a period of a few months.

Scopas tangs mate in groups by scattering eggs and sperm into the water column. It’s unlikely that they will reproduce in home aquariums, although the spawning behavior of the similar yellow tang has been observed in captivity at the Waikiki Aquarium. 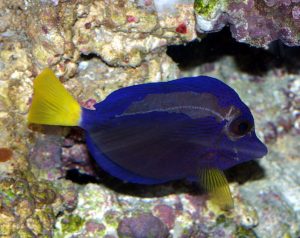 Zebrasoma tangs often suffer the symptoms of head and lateral line erosion (HLLE) if they are not provided with adequate nourishment and appropriate aquarium conditions. Tangs maintained in reef aquariums rarely suffer from this malady. The purple tang ( Zebrasoma xanthurum ) in this picture was returned to a retail store by an ill-informed aquarist.

The scopas tang is not a demanding fish in captivity. It does best in a larger aquarium, which satisfies its need to roam and imparts a sense of security. Zebrasoma tangs in general tend to be more skittish in smaller aquariums. I wouldn’t keep a juvenile in anything smaller than a thirty-long. A reef-type aquarium is the best setup for a scopas tang. They benefit from the bright light, improved water quality and additional feeding opportunities afforded by a reef aquarium. They’re also less-likely to develop head and later line erosion (HLLE) in reef setups. This disfiguring malady is thought to be related to deteriorating water quality, nutritional deficiencies and dim lighting. Zebrasoma tangs are particularly susceptible to it.

The scopas tang is predominantly herbivorous, but will eat a variety of foods in captivity. They’re not finicky eaters and, if otherwise healthy, will adapt quickly to prepared foods such as spriulina-enriched flakes, dried macro-algae, mysis and brine shrimp, and other meaty seafoods. They have a high metabolism, especially juveniles, and will lose body weight quickly if not fed at least daily. I recommend feeding dried macroalage in clips, or rubber-banded to rocks, at least every other day. Ocean Nutrition’s Seaweed Selects and Two Little Fishies’ Sea Veggies offer a variety of dried macroalage products. Well-fed scopas tangs are also less likely to pick on sessile invertebrates. While Zebrasoma tangs are generally considered “reef-safe,” individuals have been known to occasionally pick at large-polyped stony corals and soft corals. Offering alternative feeding opportunities, such as algae in a clip, will sometimes thwart this bad behavior. Many Zebrasoma tangs will pick at the “mouth” of large-polyped stony corals to induce the release of excess zooxanthellae, which the fish relish. This generally does no harm to the coral. 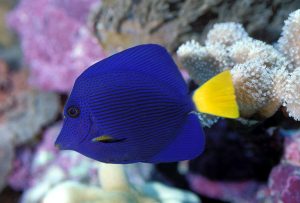 This healthy and vibrant purple tang ( Zebrasoma xanthurum ) has been a resident in one of the author’s reef aquariums for 7 years. It would be difficult to mix this fish and the scopas tang ( Zebrasoma scopas ) in the same aquarium because they share a belligerent disposition.

When purchasing a scopas tang look for an alert individual that is actively grazing around the aquarium. Ask to see the fish eat. There’s something wrong with a scopas tang that won’t eat. Avoid fish that exhibit “flashing” behavior. This is where the fish acts agitated, spreads its fins and dashes across the aquarium. Also avoid fish scraping against the rocks, with obvious signs of external parasites, or with patchy white areas on any of the clear fins. Torn fins are okay and will heal quickly. They’re usually the result of battles with other tangs. Scopas tangs use their sharp “scalpels,” which are tucked into sheaths on their caudal peduncles, to slash at rival tangs.

Scopas tangs are often underfed at retail establishments and begin to show signs of starvation. If the starvation has progressed to the point where “pinching” can be observed in the area of the dorsal musculature (the muscles running along the top of the spine, below the dorsal fin), then the fish will usually not recover. “Pinched” stomachs are common and the fish can be fattened up quickly by allowing it to graze continually on dried macroalage for a few straight days.

Scopas tangs, like most of the Acanthurids, are susceptible to parasites. They benefit from a period of quarantine, where they can be treated medicinally, if necessary, and learn to accept prepared foods. They can recover spontaneously from parasitic infections, if the display aquarium offers a stress-free environment and they are well-fed, but quarantining is always best. 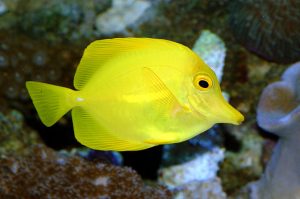 Scopas tangs are territorial fish that can be belligerent towards other fish, especially those from the same genus. I would not mix more than one scopas tang in anything but the largest of aquariums. You’ll also find it difficult to mix other Zebrasoma tangs in the same aquarium with a resident scopas tang. The best chance is to mix large and small specimens of different Zebrasoma species, with the larger specimen preferably introduced last. 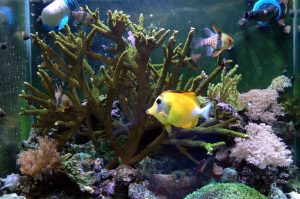 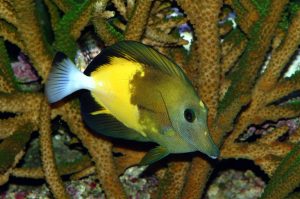 This is the same scopas tang ( Zebrasoma scopas ) pictured previously. After a few months in captivity, the coloration changed dramatically to half brown and yellow. It’s maintained the white tail fin though. The fish is thriving in a 40 gallon reef aquarium. 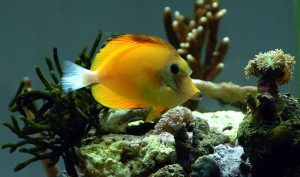 This scopas tang ( Zebrasoma scopas ) was nearly all yellow in color when first acquired by the author. Note the white tail fin, which is also unusual for this species. 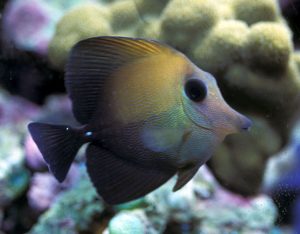 This is the typical coloration and appearance of the scopas or brown tang ( Zebrasoma scopas ). This is a healthy specimen in the author’s reef aquarium. 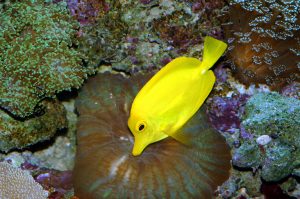 Zebrasoma tangs will sometimes pick at the mouths of large-polyped stony corals to induce the release of excess zooxanthellae. This generally does no permanent harm to the coral. Pictured is a yellow tang ( Z. flavescens ) “picking” at a Cynarina coral.