I couldn’t think of a fish to write about for this month’s column until I stumbled upon a debate in one of the “Reefs.org” forums. The debate was over the ethics of keeping the Vlamingi tang (_Naso vlamingi_) in home aquariums. The Vlamingi tang grows to be a spectacular reef fish; it’s hardy, eats well in captivity, doesn’t bother sessile invertebrates, and rarely quarrels with other reef fish. Sounds like the perfect addition to your reef aquarium, right? Well, I left out one fact. It grows to an adult length of two feet! Juvenile specimens, in the two to four inch range, are frequently available for sale. If maintained well, they will rapidly outgrow the largest of home aquariums. I’m not going to tell you not to buy this fish or any other fish, but I feel it’s important for every aquarist to do their research BEFORE buying living creatures for their aquariums. All too often I see posts on the various forums that start out with “I just bought this
fish/coral. Can someone help me identify it?” I don’t want to make this a column about ethics but I will present some of the arguments on both sides of the issue. 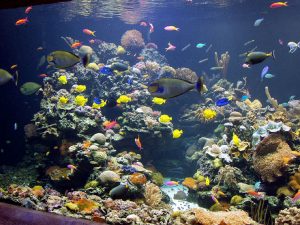 A group of Vlamingi tangs cruise along the glass in this 20,000 gallon reef aquarium located at Atlantis Marine World in Riverhead, New York.

Some aquarists say they plan to keep a particular fish until it outgrows their home aquarium and then donate it to a public aquarium. While this sounds reasonable, it shouldn’t be assumed that the local public aquarium will accept your donation. Many public aquariums are inundated with donations of fish and simply don’t have the room or need for many fish.

We all know of or heard of aquarists releasing fish into local waters when they’ve tired of them or they’ve outgrown their aquariums. If you’re considering this practice, check out these links related to the snakehead fish:

In addition to the danger this presents to indigenous fish and invertebrates, there is the potential for introducing foreign diseases. It’s also unlikely that the animal will survive in non-native waters, so there are no good reasons to support this practice.

I’ve also seen the statement, “I’ll get a bigger aquarium when it grows.” While this is honorable, it often never materializes. The fish frequently suffers and dies long before a new and appropriate habitat is obtained.

Then there is the attitude that you’re not going to keep the fish alive long enough for it to outgrow your aquarium anyway. While this is rarely said aloud, we all know it’s out there. Aquarists with this mentality should find another hobby. 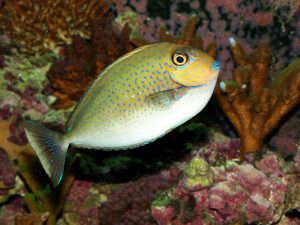 This 5 inch juvenile Vlamingi tang is beginning to display its adult coloration.

The other side of the argument is illustrated by these statements: “So what if we purchase a fish that will outgrow its cage.” “After all, we’re not obliged to recreate a natural habitat for a fish to live out its natural lifespan.” “It’s already been taken from its “home” and placed in a glass box, so what difference does it make how long it lives?” “Let’s not kid ourselves; we’re not coming close to creating a natural reef in our homes anyway.” “Assuming it’s not an endangered species, there’s no harm done.” “After all, we capture many species of fish to eat and no one complains about that.” There is some validity to these arguments. After all, what is the point of our home aquariums? Guilty pleasures, a home decoration, an educational instrument. In any case, the goal is rarely to see how close we can come to keeping a fish alive for its natural lifespan.

Let’s return to the Vlamingi tang. The Vlamingi tang is part of the large family of tangs and surgeonfish, Acanthuridae. It belongs to the sub- family, Nasinae, which contains the single genus, Naso. There are 20 species of Naso tangs, including the Vlamingi tang. Naso tangs are distinguished by the two fixed spines on the caudal penduncle. In other tangs and surgeonfish, the spines retract into a sheath. Some Naso tangs develop nasal protrusions as they mature. These can be small humps or single large horns, hence the name “unicornfish.”

All the Naso tangs get very large by aquarium standards. Adult sizes range from 12 inches up to 36 inches ( Naso annulatus)! Most of the Naso tangs are somewhat understated in coloration, with the exceptions of perhaps N. lituratus and N. elegans. Even the Vlamingi tang is a bit of an ugly duckling. The magnificent coloration doesn’t manifest itself until the fish reaches 8-10 inches in length.

Naso tangs are primarily mid-water planktivores. They cruise reef walls in large numbers and feed on passing zooplankton in the tidal currents. They will also graze the substrate for algae, a trait that is more pronounced in some species than others (e.g., N. lituratusand N. elegans ). 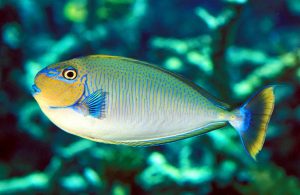 A sub-adult Vlamingi tang at 10 inches in length shows off its gaudy coloration and the beginning of its nasal hump.

Naso tangs are a widespread species and occur throughout the Indo-Pacific Ocean, but are not present in the Atlantic Ocean.

Vlamingi tangs can be maintained singly or in groups in the aquarium. Unlike other tangs, there is rarely any infighting, assuming you don’t introduce another large male into an aquarium containing an established specimen. Male Vlamingi tangs are impossible to distinguish from females when they’re juveniles. They’re both colored gray with spots of blue and areas of brown coloration, but undergo dramatic color changes as they mature. Large adults develop blue and gold coloration on a palette of brown and gray. Long caudal filaments and nasal humps are thought to develop on male specimens only.

As I indicated earlier, Vlamingi tangs can reach an adult length approaching two feet. They require a lot of swimming room. I recommend an aquarium that’s at least six feet in length and two feet front to back. Bigger is even better, especially if you’re considering keeping more than one specimen. They are a spectacular sight in groups. Joe Yaiullo maintains a group of Vlamingi tangs in the Atlantis Marine World reef aquarium. This aquarium is 30 feet in length and 20,000 gallons in volume!

Other than space, Vlamingi tangs have no special needs. They look their best in reef aquariums but don’t appreciate being crowded by corals and rocks. They literally eat just about anything, but a good diet should consist of an assortment of meaty seafood. Chopped krill, mysis shrimp, plankton, crab meat, and clams are good sources of nutrition, along with occasional spirulina-enriched flakes and dried macroalage. As planktivores, they should be fed at least twice daily. Vlamingi tangs make good tank mates. They don’t exhibit the territoriality of most of the other tangs and generally ignore other reef fish.

When shopping for a Vlamingi tang, be sure to see it eat. They aren’t picky eaters and should begin feeding quickly in captivity. While not particularly susceptible to the typical aquarium diseases, it’s always best to quarantine a new specimen for a period of at least two weeks before introducing it into a display aquarium.