Hermit crabs are found in just about all reef tanks, key members of the ‘clean up crew’ and often introduced after a comment on a web forum about how you should ‘chuck in a handful of hermits’ to any new tank with an algae problem. Hermits are often the most hardworking, undervalued and unloved residents of our tanks. In this article I hope to share with you my love of these amiable, remarkably well designed and often brilliantly coloured characters. 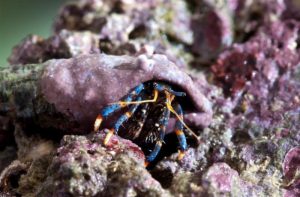 Blue Legged Hermit Crab Clibanarius tricolor. A main-stay in the aquarium trade, also known as the Dwarf Blue Legged Hermit Crab, C. tricolor is considered an essential aquarium resident by many, though several authors warn against creating too much competition between specimens for limited food resources and available shells by keeping stocking densities low – 1 or fewer per 10 gallons for example (Shimek, R., 2009).

More closely related to Squat Lobsters and Porcelain Crabs than they are to the true crabs (brachyurids), six families of hermit crabs are recognised in the superfamily Paguroidea, making over 1100 recorded species:

Hermits are found throughout the seas and oceans of the world apart from the Arctic and Antarctic regions. Many terrestrial genera have fascinating lives and are important in the pet trade in their own right. This article will focus on marine dwelling hermit crabs. 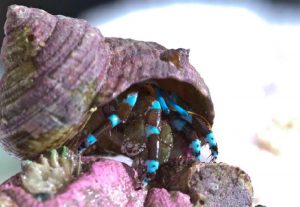 Blue Knuckle Hermit Crab – Calcinus elegans. This highly attractive species should come with a health warning – it often targets useful species of snails. In this example, this specimen killed a Mexican Turbo prior to taking its shell. C. elegans is often bought by novices as a small specimen and is regularly ‘sumped’ as time passes.

The fundamental and most obvious feature of hermit crabs is their dependency upon a rigid structure for shelter and protection from predation. In most cases this is a shell from a gastropod such as a Whelk, Triton or Cerith for example, though not exclusively so. Hermits from the order Pylochelidae have been recorded as using Tusk Shells, lengths of bamboo or even living sponges. Species such as Discorsopagurus schmitti from the Pagurids inhabit the tubes of tubeworms such as Sabellids and occasionally enter tanks as hitchhikers on live rock.

Some species have specific shell requirements such as Ciliopagurus strigatus, the Cone Shell Hermit Crab. This dandy of the group, with its yellow and red ‘stocking’ striped legs is often seen in the trade and sometimes sold as the Hawiain Hermit.

Needless to say, hermits rarely wait for their future ‘homes’ to become free through natural causes – original inhabitants are commonly picked out and eaten prior to the hermit moving in. Occasionally, examples of ‘vacancy chains’ are noted, often in terrestrial species, where the largest specimen moves into a larger shell, thus freeing up its vacated shell, the next largest moves in and so on and all specimens benefit. This is sometimes seen in aquaria, when overnight all an aquarists hermits have ‘upgraded’.

Living in a borrowed shell offers a significant benefits – hermits are freed from the biological ‘effort’ of growing and maintaining their own hard carapace as other arthropods are required to do, though this does limit hermits to habitats where ‘homes’ are available. Hermits will fight and remove smaller specimens from shells where ‘upgrades’ are scarce and a hermit without a shell is easily picked off by predators. Moving to a larger shell is required when the hermit moults its rigid exoskeleton; often this is the first time aquarists become aware of the hidden morphology of hermits as the ghostly remains are found. The inability to move into a larger shell will slow growth as well as increase competition. 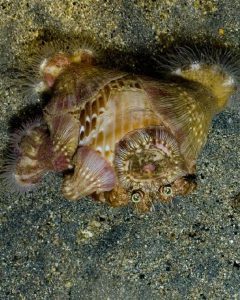 Some hermits such as the Anemone Hermit Crabs (Dardanus pedunculatus for example) take protection to the next level and recruit anemones (Calliactis sp.) to provide protection from predators. The anemones benefit by snaring particles of the crab’s food. A crab will keep its anemones with it as it changes shells and will collect others when the opportunity is presented.

Hermits use two sets of legs for walking; the others are for moving their bodies in their shells and gripping the shell interior. The pincers (chelipeds) can be used as a ‘door’ or operculum to block entry to the shell when the hermit has retreated.

Reproduction is by dispersal of free swimming larvae from eggs carried by the female. Reports of spawning in home aquariums are not uncommon. The ‘shrimp like’ free swimming juveniles will go through several moults before settling and looking for their first shell.

Hermits are omnivorous, enjoying many algae species, uneaten fish food and dead animals. Many aquarists will provide the occasional treat for their hermits, such as a piece of mussel or cockle, though many rely on the hermit’s ability to scavenge food. Hermits are often sold for their algae eating ability, but beware – many species of algae seem to be ignored by hermits; Briopsis, Asparagopsis and Valonia all seem to be passed over. It would be better to treat the cause of the algae rather than throwing hermits at the problem.

Conservation in the Wild 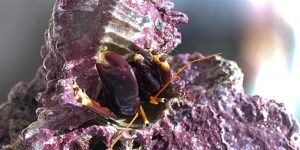 In general, marine hermits are not considered as threatened, though imports for the aquarium trade are significant. Collection of the Blue Legged Hermit Crab from waters off Florida has caused concerns for some authors. The removal of over nine million individuals in 2009 has led some to suspect that important algae control on the reefs will not occur – though this has yet to be proven.

Smaller hermits such as C. tricolor and the Red- Legged hermits (P. Cadenati, P. digueti) seem to be a main-stay of the trade and rightly so – dealing industriously with uneaten food and dead creatures. In large tanks removal of dead fish may be impossible – hermits along with other ‘clean up crew’ will perform this duty. In sensible numbers these hermits will cause a reef keeper no significant problems, apart from the occasional over exuberant removal of captured food from a sand dwelling coral such as Catalaphylla. At this point though, I should remind readers that in my experience ALL hermits may kill other shell dwelling creatures, Ceriths are particular favoured by C. tricolor, so reef safe doesn’t mean snail safe.

Larger species such as C. elegans are reputedly reef safe, though seeing one destroying a fragile hard coral as it drags a large shell across the reefscape can raise the blood pressure somewhat, leading to the hermit being relegated to the sump. Significantly larger species such as the Giant Hermit Crab (Petrochirus diogenes) and the Halloween hermit crab (Ciliopagurus strigatus) are going to be a real threat due to their outright size and ability to damage corals and even knock over unsecured live rock. 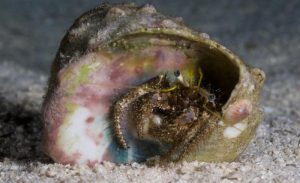 Dardanus lagopodes. A species not commonly seen in the aquarium trade.

In most cases though the old adage seems true – some reefers have no problems, whilst others do, and key to keeping your hermits happy and your reef safe, is supplying empty shells in a range of sizes, ready for growing hermits to move into. Hermits will use a wide variety of shells, but in my experience a trip to the seaside to collect Common Periwinkles (Littorina littorea) and whelks such as the Dog Whelk (Nucella lapillus) is well worth it. Murex, Ceriths and Top Shells also make good homes.

As noted earlier, without sufficient empty shells and food, hermits will not prosper and for this reason aquarists should be encouraged to avoid the ‘throw a load in’ approach and only add a few hermits at a time. I suspect many hermits starve in today’s low nutrient tanks and the addition of hermits is carried out as a ‘just in case’ strategy, i.e. if there’s too much waste the hermits will live and deal with it, if there’s not enough food then the aquarist is succeeding in keeping a low nutrient system and the hermits perish. The outlook for many ‘janitors’ is equally grim, millions of snails commonly sold as ‘Turbos’ will encounter a similar fate – assuming the hermits don’t eat them first of course!

Hermits are very sensitive to copper based medications, but are generally considered tolerant of less than perfect water conditions, being often found in tidal in shore habitats in the wild rather than in more pristine reef conditions.

The Joy of Hermits

Hermits offer no end of amusement and their antics can provide much entertainment. I feed my hermits with the occasional tablet of Spirulina algae; the merest whiff of these treats in the water will cause hermits to hurl themselves from the decor and race across the substrate. A lucky hermit will then grab the tablet and not let go despite the attentions of a Tang or two that no doubt are grateful someone is holding the algae steady in the current.

Reef keeping is replete with these simple pleasures and hermits provide so many; they are cheap, durable, often long-lived and useful. Seeing a well known hermit sporting a new shell one morning is always a pleasant sight and is a sign that things are going as they ought.

Hermit proofing a tank need not be difficult, if you accept their nature and their clumsy ways by securing rockwork and accepting potential damage to fragile corals then a hermit tank can be rewarding and the larger species can be kept with ease in a suitably sized tank.

So celebrate your hermit crabs, enjoy them for the marvellous creatures they are; look after them and their needs and they will keep doing what they do for many years to come.