There are essentially three types of filtration that the marine aquarist need be concerned with: particle, chemical, and biological. For the marine fish only or the reef tank, biological filtration is essential. Without the establishment of nitrifying bacteria toxic metabolites will reach deadly levels quickly in a marine fish or reef tank. Waste products from the fish’s respiration, excrement, etc., will rapidly convert to toxic ammonia. The same process occurs in freshwater aquariums, but in marine aquariums which have a much higher pH – at least 10 times higher – a given amount of ammonia is at least 10 times more toxic. Keep in mind that the higher the pH the more available unionized ammonia, which is the toxic form of ammonia. Therefore, it is essential that the marine aquarist establish a sufficient colony of nitrifying bacteria to convert ammonia to nitrites and finally to nitrates. Nitrates are relatively nontoxic. This must be done before introducing fish into a newly setup marine aquarium. There are any number of ways to accomplish this. One way is to take filter material from an established marine aquarium and place it in the filter system of the new aquarium. Once there are nitrifying bacteria present increasing their number to handle the arrival of fish can easily be done by injecting ammonia into the tank. Even human urine will do nicely. It is then necessary for the aquarist to measure the change from ammonia to nitrites and then to nitrates, a process that usually takes several weeks. Keep in mind that these bacteria are aerobic and should be placed in filter material that is exposed to good water circulation. This is important for fish only marine aquariums. With a new reef tank the presence of conditioned live rock will have already acquired nitrifying bacteria. If the rock is dead and sterile then it will have to be made biologically alive using the same methods as described for new fish only aquariums. 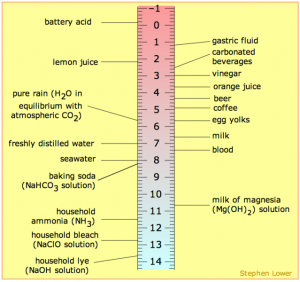 Producers and Consumers of Waste

In successful reef tanks the production of waste, mostly by fish metabolism and uneaten food, is in balance with the capacity of the consumers. The filter feeders and the photosynthetic, symbiotic dinoflagelates (ZOOXANTHELLAE) that live in the hermatypic (reef building corals) corals will consume some waste, but unless there are very few fish in a large thriving reef tank waste will build up. It is therefore necessary for the reef keeper to use water changes, mechanical, and chemical means to maintain this vital balance. The buildup of waste, usually measured by aquarists as nitrates and organic phosphates, if allowed to concentrate will interfere with the ability of many invertebrates to survive, let alone grow. Phosphate (PO4) at concentrations greater than 0.1 PPM will interfere with coral growth.

One way to dilute unwanted waste in the form called total organic carbon or TOC is through water changes. Many successful reef keepers change 25% of the water monthly. However, for this to be effective the new water must be pure, free of phosphates and other waste products. The new saltwater should be made up from water that has been treated by reverse osmosis and deionization. Otherwise, whatever impurities exist in one’s tap water will concentrate with the addition of water to replace seawater from evaporation and during water changes. Note, when making a significant water change it is important to make sure that the new water is at the same salinity, temperature, and pH as the reef tank’s water.

For a long time marine aquarists believed that protein skimmers (also called foam fractionators) were the be all and end all of waste removal. Furthermore, that they were so efficient that they could remove too much, and thereby starve certain corals. They are effective at removing phytoplankton. However, resent studies by Professor Feldman has shown, regardless of the type of skimmer used, skimmers will only remove about 20% of the unwanted TOC. I strongly suggest that you read Feldman’s study published here.

I certainly do not want to give the impression that skimming is useless, only that it is but one of the useful devices available to the aquarist to maintain a balance between the producers and consumers of waste. Also, it greatly helps with gas exchange, especially at night when the production of oxygen stops with the end of photosynthesis after the lights are turned off.

There are two forms of chemical filtration commonly used by marine aquarists, activated carbon and chemical phosphate absorbers. Activated carbon is very useful due to its ability to absorb TOC; however, it requires frequent changing – weekly –as it becomes saturated easily. There are a number of PO4 absorbers on the market – Phosban and ROWAphos, are the two most popular – which are very effective at removing PO4 to almost immeasurable levels. To know when to change the PO4 media requires a PO4 test kit that will measure to very low levels. Salifert, Hack, and ROWA Phosphate Test Kit, make kits that I know will indicate low enough to be useful; whereas, most other hobby kits are not. There very well maybe others, but these I have used successfully.

If there is a heavy bioload (fish) it is difficult to keep the nitrate level below 10-PPM. Still, many of the more delicate invertebrates do better in water that has not accumulated a concentration of nitrate. One way to keep nitrates low is to do regular water changes; how much and how often will depend on the bioload of fish, and how often and how much they are fed. The way to monitor this is with a nitrate test kit. The aquarist should recognize that there is a difference in what some nitrate test kits indicate – nitrate- nitrogen or nitrate (NO3). If your kit measures nitrate-nitrogen to convert this to the Nitrate ion multiply your reading by 4.4. Some advanced aquarists have experimented with what is called the vodka method to reduce the nitrate and phosphate levels in their aquaria. Vodka is a carbon source, and can stimulate the growth of bacteria that will use nitrates and phosphates as food. To try this method it is vital to have a well functioning skimmer, as
the bacteria can reduced the oxygen levels too much. For more information about this method check chapter 6 in The Reef Aquarium: Science, Art, and Technology vol.3 by Delbeek and Sprung. ISBN 1-883693-14-4 In my opinion, if there’s one book that the beginning reef keeper should regard as the essential source it is this book.

It is also possible to keep the TOC levels acceptably low by a method known as Algal Turf Scrubbers (ATS). In this method sufficient alga is grown and harvested. The alga uses nitrates and phosphates as food, which is then removed from the aquarium with the harvesting of the algae. It is of course necessary to grow a lot of alga, and to also be concerned with what trace elements are removed from the system with the harvested algae. Another concern with this method is that it yellows the water; however, this can be overcome with the regular use of activated carbon. This method was initially promulgated by Walter Adey. 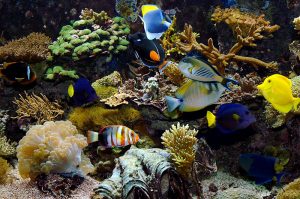 Check out the following link for more discussion on this and other methods for reducing TOC in reef tanks:

A successful reef tank is a thing of beauty and well worth the effort. A picture of my reef tank