Aiptasia are the bane to most every reef aquarist. There are several means for control, but none is 100% successful. Other than bleaching your display (not recommended for maintaining the health of other aquarium inhabitants), there is no guarantee for the complete removal of Aiptasia .

Peppermint shrimp, Lysmata wurdemanni, are often used for control of these anemones, and work well many times, but often if well fed they prefer easy to eat aquarium food, rather than Aiptasia. And for those who direct feed their LPS (Large Polyp Stony) corals, peppermint shrimp can be a nuisance as they love to steal the food directly from the mouths of coral.

Copperband butterfly fish are also used for Aiptasia control, yet they too have their drawbacks. They often come into the trade malnourished and disease ridden. Many times an aquarist has to go through half a dozen or so until they get one healthy enough to survive (that doesn’t count all the fish that don’t make it out of the store, or out of the wholesalers). And even if you get a healthy one, there is no guarantee that they will a) eat Aiptasia and b) not eat your favorite coral.

Manual control on the part of the aquarist is another option. Some use injections of kalkwasser, or feed them doses of the Aiptasia control product, Joe’s Juice. Drawbacks include the large amounts of time needed to do this work, and often pieces of the anemone’s base tissue survive and grow more anemones.

My preferred method of control is the use of Berghia nudibrachs. These wonderful little animals have their own drawbacks, however. I hope to address these so that many more aquarists can save their favorite colonies from the blight of thousand of stinging tentacles. One major obstacle is price. The average price now is between $12 and $15 per nudibranch. This may not seem so bad, however at recommended stocking levels this can get expensive. Some sources recommend three or four per 100 gallons. I believe this to be too few and instead recommend at least 12, preferably 20 or more. While it only takes two Berghia to breed since they are hermaphrodites, they face many obstacles in aquaria. 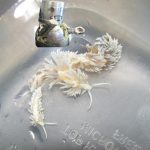 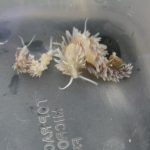 The first danger is fish. Many fish, particularly wrasses, love these little morsels of sea slugs. Most fish will find the slugs unpalatable since they sequester the nematocysts (stinging cells) from the Aiptasia in their cerata, the frilly projections on their back used for respiration and defense. If they survive fish the next challenge could be ornamental shrimp, or the peppermint shrimp you previously put in there to try to control the outbreak. After that our friend to nutrient cycling and proper reef aquaria functioning, the tiny Amphipod will pose some problems to the survival to populations of Berghia. These guys consider Berghia eggs delicacies, and often newly settled nudibranchs. Also in culture I’ve had amphipods eat full grown adults. I feel that in aquaria Amphipods will not usually hunt down adults, since they have many other easier food sources, but this can’t be ruled out. I by no means recommend trying to exterminate Amphipods, which is possible. However this could be disastrous to the functioning of your reef tank, so I won’t even tell you how.

I’ve been breeding these guys for almost two years now, yet for the some of that time I was reluctant to recommend their use since I myself wasn’t sure they were a reliable means of Aiptasia control. After many successful eradications I now feel I can freely recommend their use. I’ve used this approach many times in the thousands of gallons and dozens of display and aquaculture systems at the Science and Technology Magnet High School of Southeastern Connecticut. 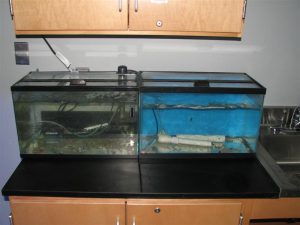 The key to not going broke adding enough to your tank to control the Aiptasia is to breed them yourself. You can start a breeding colony with just a few individuals. I recommend acquiring 4 or more nudibranchs, just in case a few meet their untimely demise.

Now the breeding of nudibranchs themselves can be something of a challenge, sometimes requiring much labor on the part of the aquarist. I originally tried using small culture containers floated in a larger aquarium, but after two weeks 50 hours and 100 water changes I quickly changed approach. I set up several 10 gallon aquariums with a bubbler (air pump and air line weighted down with old dried coral skeleton), a 50 watt heater and water from an established aquarium. I used the versa-top style glass aquarium lid to reduce evaporation. I then supplied ample amounts of Aiptasia from my systems. I use no lights on these tanks to reduce the growth of unwanted algae. 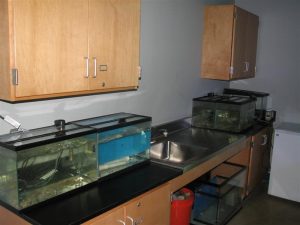 One mistake I initially made was adding rocks full of Aiptasia. This was a big mistake. Living among the rock was our friend the Amphipod . These proceed to eat every single egg cluster. Upon recommendation from the venerable Anthony Calfo to make sure not add any live rock, I promptly removed any rock, and rubble and hunted down every Amphipod , and placed them back in the reef displays. After doing this new eggs were seen within days and the life cycle could be completed.

The key is to add only Aiptasia to the Berghia tanks. I make sure to completely remove them from any substrate. I have several tanks dedicated to Aiptasia growth to supply food for the sea slugs, I also let several systems grow some Aiptasia so I can regularly go through and collect anemones.

I do not use sand in these tanks for nitrate control, mostly so I can make sure there are no carnivorous invertebrates that would potentially eat the sea slugs or their eggs. There should be little production of nitrate, due to the small amount of actual protein being cycled through the system, since anemones are mostly water. I find the need for water changes minimal due to this. Detritus will build up over time and excess can be siphoned out.

In order to start more cultures I simply take slugs from one tank, take 1/3 to half the water, add aged system water to both tanks to make up the difference (make sure there are no hitchhikers such as Amphipods or mysid shrimps). In one tank where I left only eggs behind, months went by after hatching and I was minutes away from cleaning the tank out, but something came up and I had to wait until after the weekend. When I got back I went to clean the tank out and saw dozens of baby slugs. This method of culturing nudibranchs seems to take as long as 3 months or more for the larvae to settle out. So if you end up in a situation with a seemingly bare tank, save a few Aiptasia, just wait, and wait.

This method has left me plenty more free time, and many less culture crashes. I spend about a total of 5-10 minutes a week maintaining my nudibranch cultures. This is much more reasonable than telling your spouse you need to quit your job to culture Berghia. If you have space for two 10 gallon tanks you could do quite well. One would be used for Aiptasia, which you can harvest from your infested tank. The other you can use for breeding the large numbers of Berghia needed to eat the Aiptasia in your aquarium.

In my systems it took about 3 months for me to see a difference in Aiptasia levels. In fact it seems like the reduction of the anemones happens overnight. This is probably due to the fact that it takes a generation or two of Berghia , to reach critical mass, and when they do, there is a lot.

There is a good possibility that the Aiptasia will eventually return, since the Berghia often can’t get to every single last Aiptasia. I do have one system that one year after the elimination of Aiptasia is only now showing a very few new anemones. You can continue to keep a small culture of Berghia going with minimal work, or garner favor with your fellow clubbers or reefing friends by giving them your surplus in exchange for Berghia from them in the future. Good luck and happy reefing!

Justin Credabel is president of the 501(c)3 non-profit Applied Sustainable Aquaculture Inc. and Resident Scholar at the Science and Technology Magnet High School of Southeastern Connecticut, where he runs the wet lab and coral aquaculture program, including the Coral Bank. Justin is also a musician in the band Incognito Sofa Love, signed to Tribe Muzik. Go to Muzoo.com for music and videos.

His new video “Fragilicious” can be seen on Youtube at: http://www.youtube.com/watch?v=jgbH04g6mXs